Last week, the Israel Nature and Parks Authority (INPA) began work on its plan to construct a new “national park” in the middle of Issawiya, a Palestinian neighborhood in East Jerusalem adjacent to Hebrew University. Israeli activists joined Palestinian residents to unblock the road sealed off by Israeli authorities earlier this week. 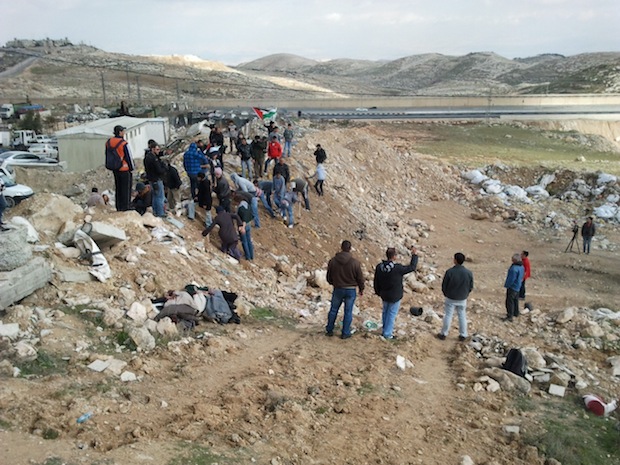 Issawiya, East Jerusalem– On Friday morning, around thirty Israeli Jews joined Palestinian residents of Issawiya in an attempt to clear a road leading out of Issawiya that was blocked last week by the Israel Nature and Parks Authority. Together, we worked with shovels, picks, and bare hands to break down the pile of rubble blocking the path.

Following a petition submitted by the Sheikh Jarrah Solidarity Movement to the Jerusalem Municipality, the construction work was frozen, but much of the damage has already been done. The INPA, a governmental body charged with the protection of nature, landscape and heritage in Israel, destroyed a road and piled the rubble in a way that would prevent the residents of that part of Issawiya to travel on this road.

“They destroyed and blocked off a road, we will reopen it.”

Clearly, the INPA has the advantage of powerful tools and the backing of a state whose mechanisms explicitly favor Jewish settlement over the basic rights of Palestinian residents. But as we stood there, struggling to move the pile of rubble with our hands and shovels, it was clear that we also have an advantage: the advantage of being right.

Moriel Rothman is an American-Israeli writer and activist. He lives in Jerusalem, and is active with Rabbis for Human Rights and the Solidarity Movement.