Whether they want to attend family gatherings, open a business or visit sick relatives, Palestinians under occupation must adhere to military regulations, the vast majority of which are hidden from public scrutiny.

“There are no secret laws in Israel. […] Legislation that is passed secretly and kept away from the eye of the public is one of the characteristics of a totalitarian government, and is not in line with the rule of law” (Judge Cohen, Civil Appeal 421/61, State of Israel v. Haz [4], pg. 2204-2205)

No one knows why, but Israel has a regulation that prevents Palestinians from entering the city of Eilat. Even those who hold entry permits into Israel cannot enter. Even the Coordinator of Government Activities in the Territories (COGAT), the unit charged with coordinating activities in the occupied territories (which oversees the implementation of the procedure), does not know the reason for its existence. It once had a document explaining the origin of the procedure, but it got lost. For at least the past two years, COGAT has been searching for the reason behind the strange restriction. And until they find it, Palestinians will be prevented from entering Eilat. Just like that.

Eilat is just one example. The Freedom of Information Law obligates all public-benefit corporations to publish their regulations. COGAT has knowingly been breaking the law for years. Over the years, Israeli NGO Gisha has filed various petitions to request specific regulations. Eventually the organization got tired of chasing after COGAT (the unit never publishes procedures of its own volition), and requested that the court force it to publish all of its regulations. In the beginning of the month Gisha received some good news: COGAT finally began publishing regulations previously unavailable on its website.

For example, COGAT published a regulation titled “Issuing permits to residents of the Gaza Strip for humanitarian reasons (weddings and funerals)” in October, which organizes the bureaucratic steps that the residents of Gaza must undertake if they wish to attend a funeral or wedding of a family member.

The rights of Palestinians as well as the state’s obligations toward them are not anchored in law but rather in a series of regulations. These regulations are the closest thing to a legal codex, which touch upon the Palestinians’ most basic rights: they establish where people can live, whether they can make a living, where they can pray and whether or not they can travel abroad. These are the same regulations that establish whether a Palestinian father can take part in the his daughter’s wedding, whether a student can sign up for a master’s degree, whether a grandmother can visit her grandchildren and when the sick can receive medical care.

Finally, during a discussion that took place on November 19, Gisha discovered that the state itself does not know how many of these regulations actually exist. State representatives admit that they do not have an updated list of these regulations. They have a list from 2008, which they claim is old and no longer relevant. The working assumption is that 90 regulations do not appear on COGAT’s website, which means that approximately 50 percent of COGAT’s regulations have never been published. These are dozens of “secret laws” that dictate the lives of millions of people. 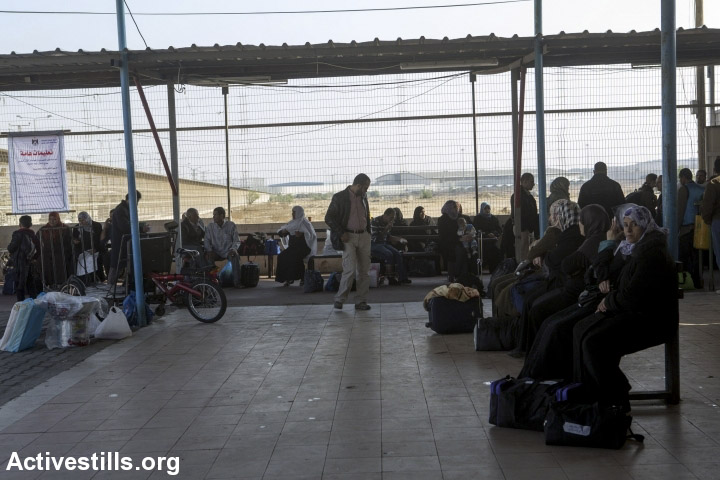 Palestinians wait at the Gaza side of the Erez crossing, Beit Hanoun, Gaza Strip, November 19, 2013. Erez is the only point of crossing for persons between Israel and the Gaza Strip, and with the tightening of the siege, a very low number of Palestinians are able to obtain permits. (photo: Anne Paq/Activestills.org)

If the army commanders don’t know the regulations, then surely the Palestinian residents of the occupied territories don’t know them either. And as previously mentioned, these regulations relate to basic necessities such as work, health and family life. Furthermore, there is no way to criticize illogical regulations, and there is a fear that what is allowed in one place is forbidden in another. Without an open list of regulations, the potential for corruption and arbitrary activity becomes enormous. In reality, nothing can stop a 19-year-old sergeant from refusing an important request, simply because he feels like it. Certain people will get permission, others will be rejected, and not a single person can know why.

Even today we know that many of these prohibitions are illogical. They are inconsistent, irrelevant, do not ensure security and no one knows why they are there.

Regulations in Hebrew or gibberish?

For the time being Gisha has amassed quite a bit of information thanks to its petition. Thirty new regulations were added to the COGAT website in October, which is nearly half the number of regulations published up to that point. Gisha has never heard of over half of them, but will no doubt make use of them (some expand on or make clear information that was available in the past, such as “permit status,” which contains all the different rules regarding the movement of Palestinians.)

It is difficult to explain what kind of difference this makes for the average Israeli citizen, who is used to freedom of movement, freedom of occupation and an unfettered family life. For example, one of the new regulations deals with exiting Gaza in order to visit a sick relative abroad. Very few of these types of requests are submitted to the army, probably because most Palestinians do not know that such an option exists. 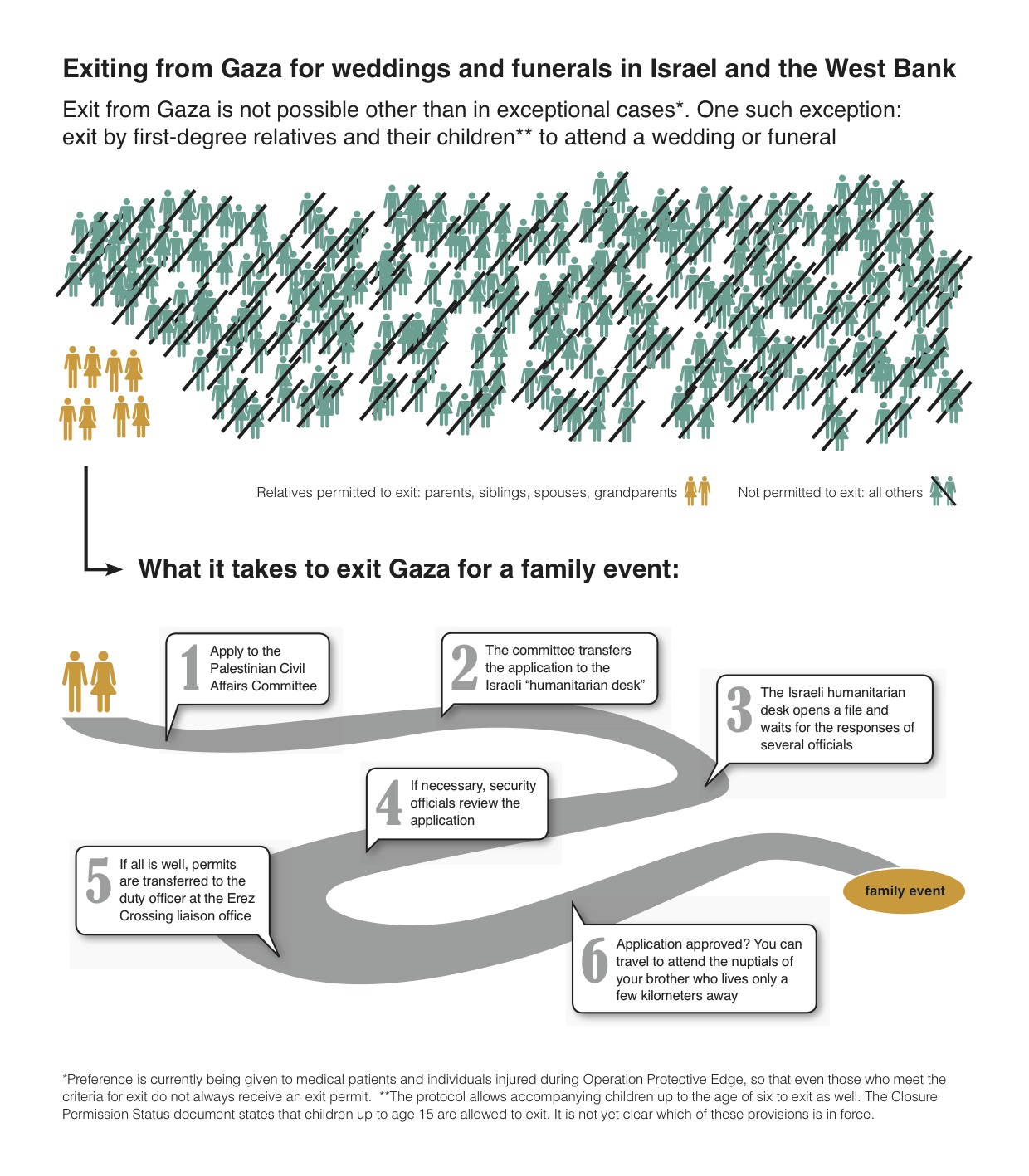 Gisha further requested that all the regulations be translated into Arabic so that they are accessible to the Palestinian population. One of the important gains of publishing the regulations, especially in Arabic, is that people discover that there is a possibility, however limited, to submit requests over things they previously never thought to try. Until now, most of the regulations were never translated to Arabic. Even the ones that were “translated” were actually written in gibberish. COGAT has pledged to translate the regulations that “are meant for the Arabic-speaking population.”

Among the regulations that were never published are regulations that the army uses on a regular bases. One example is the “regulation for divided families,” which arranges travel from Israel to Gaza for Israelis who have family in both Israel and the Strip. Some of these regulations were established five, seven or even 10 years ago. However, until now they have not been published, and the army has made no effort to bring them to the attention of the public. Even the state agrees that the army has been violating its legal obligations. We can only hope that something will change.

Maayan Niezna is an attorney at Gisha – Legal Center for Freedom of Movement. This article was first published on +972′s Hebrew-language sister site, Local Call. Read it in Hebrew here.

Related:
Why the IDF cannot be trusted to investigate itself
Leading Israeli human rights group stops cooperating with IDF