Threat of Palestinian Authority’s collapse forces Netanyahu, who has humiliated Abbas and his people as often as possible, to try to placate them. 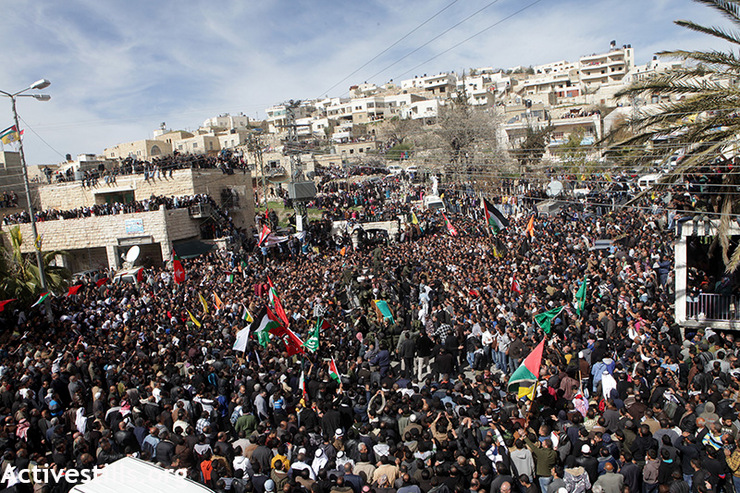 At the beginning of this week, when Palestinian riots threatened to get out of hand, especially if one of the hunger-striking prisoners died, what did Netanyahu do? He gave in. He announced on Sunday he was giving the Palestinian Authority its customs taxes for January, which he’d held back to punish Mahmoud Abbas for winning recognition for Palestinian statehood at the UN last November.

Palestinians throw stones and Molotov cocktails at Israeli soldiers, PA security troops do nothing to stop them – and Bibi Netanyahu immediately rewards them with a hundred million dollars! (That’s how he would frame it if some other prime minister had done what he just did.)

What’s going on here? Answer: Netanyahu is scared. What he’s scared of most, I think, is that the PA will collapse, or effectively collapse, meaning it will stop playing Israel’s collaborator by keeping a tight lid on Palestinian rebellion, and thereby force Israeli troops to go back into the cities, villages and refugee camps of the West Bank and do all the dirty work themselves – 24/7, just like they did before the Oslo Accords.

That is the Israeli nightmare, or at least the nightmare of Israelis who get paid to oversee the West Bank. If the PA stops policing the Palestinians and the IDF and Border Police take their place, not only is this going to require tens of thousands of Israelis, including reservists, to go put the Palestinians back in their cages and keep them there, it’s going to mean a return to the world’s TV screens of the David vs. Goliath scenes of the first Intifada 25 years ago. It’s going to mean not only Israeli deaths and injuries, but a much, much greater number of Palestinian ones.  If, in such a situation, the Palestinians were to stick to rocks and Molotov cocktails against Israel’s firepower, and, above all, if this were to happen on the watch of right-wing rejectionist Netanyahu, this would be a disaster for Israel and victory road for the Palestinians.

It may not happen, but that’s the direction things are headed in. During the last few weeks, for the first time since Abbas took over in 2004, the PA hasn’t been doing its job on the ground like good collaborators should. Netanyahu, it seems, is on the verge of killing the goose that laid the golden egg – by having punished the PA economically, by having trashed it politically with years of settlement expansion and diplomatic indifference. With the prisoners’ hunger strike lighting a fire under the Palestinian public, Abbas and his people have taken up the cause, with PA security chiefs reportedly promoting the strike behind the scenes. Meanwhile, they’ve let the solidarity protesters in the streets throw all the rocks and firebombs they want.

Everyone knows things could get out of hand so that the PA forces wouldn’t be able to control events even if they wanted to – and Abbas and his men are going along with it. They’re trying to ride the tiger but they know they could be thrown off. What choice do they have? What choice has Israel left them? What incentive, now that the paychecks aren’t even assured, has Israel given them to keep the clampdown in place? Why shouldn’t they get back into the good graces of their mobilized brethren before it may be too late?

So Netanyahu, who until now humiliated Abbas at every possible turn, is obliged to appease him. The balance of power has shifted. Not completely, though – I suspect that prisoner Arafat Jaradat’s funeral yesterday, attended by 25,000, went off without incident because the PA wanted it that way; they’re not ready just yet to “hand over the keys,” as Abbas keeps threatening. The PA gets about $ 1 billion a year from foreign donors; one out of three Palestinians in the West Bank and Gaza depend on its salaries; its police, courts and other public institutions mediate life in Palestinian society. If the PA collapsed, it would be a nightmare for Palestinians, too. But by sucking Israel back into every corner of the West Bank, thus sending the price of occupation through the roof, the PA’s collapse could also be the Palestinians’ gateway to freedom.

In a sense, there’s a game of chicken going on now between Abbas and Netanyahu, the winner being the one who shows the most boldness while stopping just short of letting the PA fall. They may both lose – the PA may fall by popular Palestinian demand. But at this point, I’d give the advantage to Abbas because he has much less to lose and finds his hand being forced by masses of people who are much bolder than him. At any rate, he and the 2.5 million West Bankers have more power vs. Israel than they’ve had in a very long time. They’re threatening the power that controls them.

The credit for this belongs first to the hunger strikers, beginning with Khader Adnan a year ago – and of course to Israel’s blindness born of arrogance. I know it’s possible, but I find it hard to imagine the Palestinians going back to passivity and despair, and the PA going back to obedience, because this “popular resistance,” so far at least, is working.