If the attacks on Paris are viewed as ‘an attack on us all,’ then so too should the wars in Syria and Iraq. 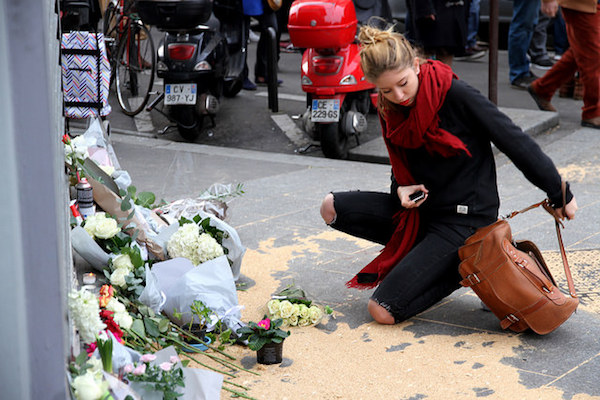 Like millions of others last night, I stayed up for hours following the news of the horrifying attacks in Paris. At the same time that I dreaded the rising body count and the welfare of my friends and a family member (all safe), I was also afraid of what the public responses would be to the events both from France and around the world.

Indeed, I came across plenty of hateful and racist comments lambasting Muslims, cursing Syrian refugees, and calling for an all-out war on “them” (whoever “they” are). But I also saw that many people were just as quick to condemn these hostile messages, chastise racism and political opportunism, and insist that “terrorism has no race or religion.” In the midst of yesterday’s dark events, it was comforting to know that there were still many beacons of humanity refusing to succumb to twisted narratives.

The next weeks will be filled with analyses of the attacks in Paris, seeking to provide lessons for moving forward on the questions of Da’esh (the Arabic name for ISIS), the security of European countries, and the ongoing humanitarian crises in the Middle East. At the same time, many political actors will try to exploit the events for their gain, from Bashar al-Assad to the French far-right to Israeli government officials.

The biggest challenge in the midst of this mess is to assert a key understanding about last night’s events. The cause of the Paris attacks is not the Syrian refugee crisis in Europe, nor France’s involvement in military operations in the Middle East, nor the religion of Islam. It is the desire by groups like Da’esh and their followers to exert power over governments and civilians, and to project an image of omnipotence and far-reaching influence. Fear is the most effective tool to achieve this goal, and atrocious acts of violence are its quickest generators.

However, contrary to the claims of Da’esh and many politicians and pundits, the main targets of this agenda are not people from Western countries. In fact, its primary victims are the people of the Middle East. A night before the Paris attacks, two suicide bombings by Da’esh ravaged the Beirut neighborhood of Burj al-Barajneh, killing 43 people and injuring over 200 more. The following day another suicide bombing, also believed to have been committed by Da’esh, killed 19 people and injured over 30 at a funeral in Baghdad. These are only some of the undoubtedly countless acts of killing by the group this week alone, most of which hardly receive attention despite their daily occurrence.

Sadly and expectedly, the attacks in Beirut and Baghdad did not create the uproar that we are seeing with Paris today. Just as bad, however, is how various international media outlets covered the news, such as the New York Times’ initial headline of “Deadly blasts hit Hezbollah stronghold in southern Beirut.” Few take the time to comprehend how such labels are insulting and dehumanizing to the victims and their loved ones, in the same way it would if newspapers described the Paris events as “Deadly attacks hit capital of European power waging war in Syria.” Civilians should never be explained as political items; they are human beings with stories and families who do not deserve such atrocious deaths.

The disparities of international media and public interest are unfortunately a fact of life that all people from West to East are guilty of. They are even more severe when it comes to our ignorance of the far-worse daily events happening in places like Syria, Iraq and other parts of the world. But the imbalance is nonetheless crucial for us to keep in mind. Many Middle Easterners hit hardest by the region’s conflicts watch the outpouring of political and public support for Paris, only to feel further isolated, ignored, and irrelevant to the world, thereby oftentimes increasing their sense of despair in environments far more brutal and deadly than in Paris yesterday evening.

This is not at all to say that the inspiring solidarity with Paris is wrong or misplaced. But the world should be reminded that the selectivity of our responses, though natural, has real effects on millions of others watching from afar. As Europe is learning through its refugee crisis and now with Paris, governments and their people cannot hide behind their borders to escape the conflicts occurring on their doorstep. Similarly, the lack of active sympathy for people suffering from severe crises does not shield us from the effects of those crises. In one form or another, what happens in one part of the world will always affect another.

The violence in Paris, Beirut and Baghdad this week should therefore be a reminder of the interconnected nature of the world’s troubles, and our need to channel the same energy and empathy in the Middle East as we do in Europe. If the attacks on Paris are widely viewed as “an attack on all,” then so too should the wars in Syria, Iraq and others. Thankfully, despite powerful negative forces seeking to turn the attacks into a source of division, many in France and elsewhere are working to encourage a more unifying belief, and are fighting for their governments to enact better policies based on that worldview. The attacks in Paris are unlikely to be a game-changer in this regard. But they can at least serve as a platform for us to not only share our collective grief and support, but also to re-energize our efforts to help others in need.