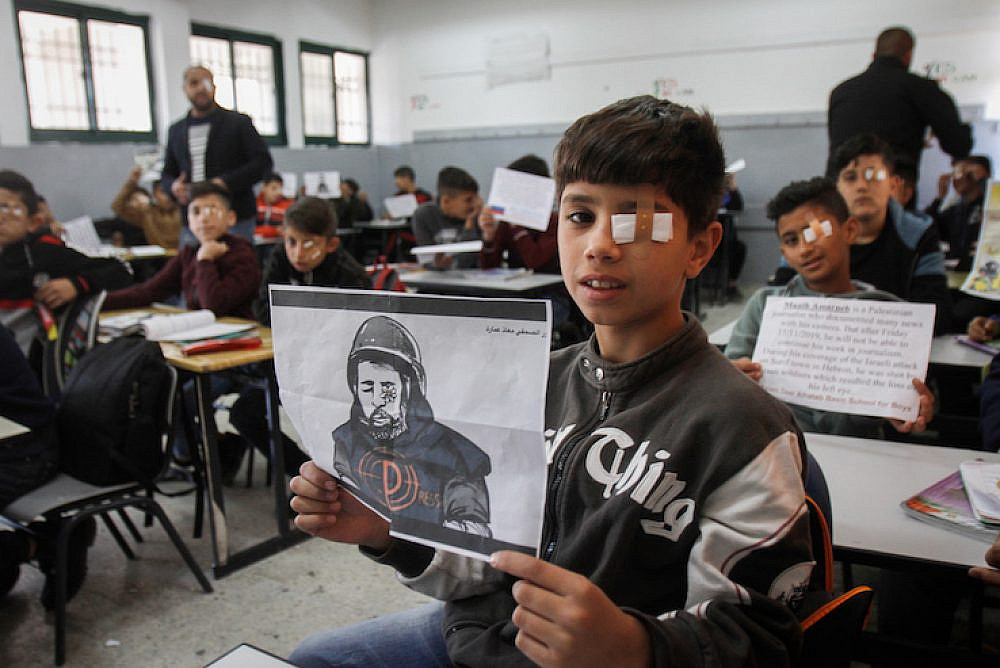 Palestinian students at Salem School in Nablus, West Bank wear eye patches in solidarity with journalist Moath Amarnih, who was wounded and lost sight in one eye during clashes with the Israeli army in the village of Surif. November 18, 2019. (Nasser Ishtayeh/Flash90)

Moath Amarnih, a Palestinian photojournalist, was partially blinded when Israeli Border Police used live ammunition to disperse protestors at a small demonstration in Hebron last Friday. Photos taken at the scene show he was wearing a blue flak jacket prominently labeled “Press,” and a helmet. Amarnih lost an eye in the shooting, and has been in hospital since.

Amarnih was initially evacuated to a hospital in Hebron, but after pressure from journalists and the Palestinian Authority he is now hospitalized at Hadassah Medical Center in Jerusalem, where he has received dozens of visitors over the past two days, most notably his colleagues who live in East Jerusalem, and his 8 year-old daughter. Conspicuously absent is his wife, who has been refused a permit to enter Jerusalem. Also notable for their absence are representatives from the Israeli authorities: no one has come to offer condolences or an apology; nor has any police investigator come to take a statement.

The incident occurred when police opened fire at a small group of unarmed Palestinian demonstrators who were protesting the confiscation of their land by settlers from Bat Ayin. 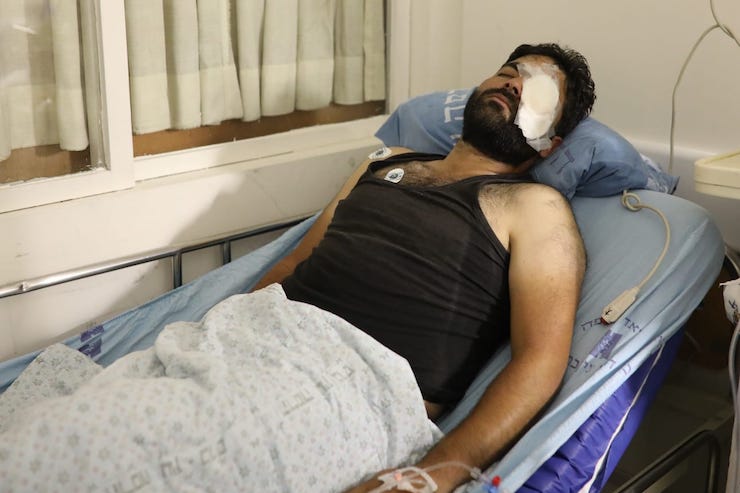 A relative of Amarnih’s from Dheisheh refugee camp, near Bethlehem, has been at his bedside since Friday. He asked that his name be withheld lest the Israeli authorities revoke his work permit.

“I don’t understand how the sniper could shoot him,” said the relative. “He looked through his crosshairs and saw a journalist, a photographer, with a helmet a vest saying ‘journalist’ on it — how could he fire at him?”

Testimonies from other journalists who were covering the demonstration say that Amarnih was struck by a .22 bullet that had ricocheted off a demonstrator. His relative, however, is convinced it was a direct hit.

The police released video footage of the incident that shows, they claim, Amarnih was standing behind a rock. In front of him — although not directly opposite — are a few youths throwing stones in the direction of the Border Police. The clip does not show the shooting; nor does it show Amarnih after he was injured. The police did not provide an explanation as to why officers chose to use live ammunition on such a small group of people who were standing at considerable distance from them. Although .22 bullets are less powerful than “regular” live ammunition, they can still cause grave injuries, and even death.

The Israeli media has, for the most part, shown little interest in the incident, which has been widely reported by international media outlets.

Amarnih is dazed from lack of sleep, intense headaches and painkillers. He has already undergone one operation on his eye and is due to have another one  — more complicated this time — to try and remove the metal fragments left over from the bullet.

One of Amarnih’s visitors, a seasoned journalist from East Jerusalem, is stunned by what happened. “This isn’t just about Moath — it’s about all of us,” he says. “Today it’s happened to him, tomorrow it could happen to anyone.”

A group of Palestinian journalists has launched a broad online campaign in support of Amarnih. Thousands of people have taken part, including Palestinian journalists from the West Bank who have given television interviews with their left eye covered, and school students from the West Bank and Gaza who have photographed themselves in class with one eye concealed by a bandage or one of their hands.

On Sunday, dozens of Palestinian journalists protested at Checkpoint 300, a major crossing near Israel’s separation wall in Bethlehem. Israeli Border Police used violent crowd dispersal methods to break up the demonstration, firing tear gas canisters and shock grenades, and arresting three journalists who were both participating in and covering the event. Similar demonstrations took place in Ramallah, Nablus and Gaza. On Monday, dozens protested on Hebron’s Shuhada Street — including members of the ultra-Orthodox sect Neturei Karta, which is anti-Zionist for religious reasons.

The Israeli Police spokesperson responded to a request for comment on Amarnih’s shooting by stating that all their actions were undertaken “in order to prevent innocent people from being injured, and photographers are also requested to keep their distance from areas where they are likely to be endangered.”

Photojournalists in the West Bank and Gaza are widely viewed as crucial witnesses to life under occupation, which is rarely covered by Israeli media outlets. International media outlets rely on Palestinian journalists to report from the ground.

A version of this post was originally published in Hebrew on Local Call. Read it here.