This, at any rate, is the headline of a small story by reporter Itamar Eichner in today’s Yedioth Ahronoth. Translation first, comments second: 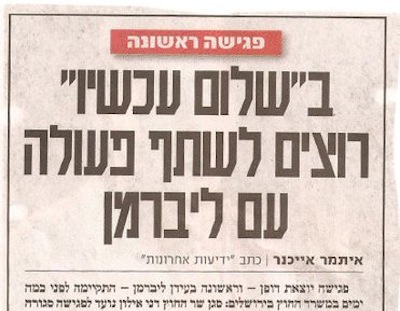 An extraordinary meeting, the first such meeting of the Lieberman era, took place some days ago at the Foreign Ministry in Jerusalem, when Deputy Foreign Minister Danny Ayalon met behind closed doors with a delegation of senior officials of the Peace Now movement.

At the meeting, which was initiated by Peace Now, the activists asked Ayalon if the Foreign Ministry could cooperate with Leftist circles in its hasbara [public information] efforts in Israel and abroad – in a bid to present Israel as a pluralist country that allows for a variety of opinion.

During the meeting the organisation delegates suggest to Ayalon a number of possibilities for including the Left in hasbara efforts, including sending Peace Now delegates to lecture abroad on behalf of the Foreign Ministry. “Often it’s actually the voices coming from the Left that have a better chance of improving Israel’s standing in the world than speakers from the right,” Peace Now secretary-general Yariv Oppenheimer told Ayalon.

Openheimer explained Yedioth Ahronoth yesterday that “although the foreign ministry has a political minister, this minister has a state duty to represent Israel in all of its variety.” 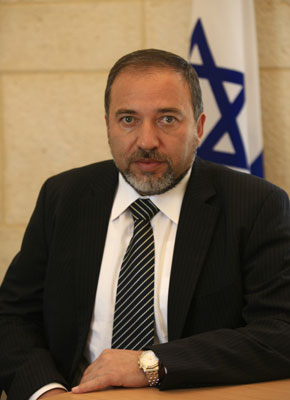 “We have no intention to become spokesmen for Lieberman. We will continue attacking his policies. But we believe the foreign ministry has an interest to encourage those other voices to be heard around the world,” Oppenheimer said.

Ayalon promised Peace Now to take a positive look at their request. “I welcome the real and important dialogue between all parts of society and all Zionist organisations. Peace Now defines itself as a Zionist organisation, and as such I see no problem in them cooperating with the Foreign Ministry.”

“Btselem’s director-general met recently with officials from the international organisations desk and from the international law and human rights department to discuss two issues B’tselem is concerned with: Administrative arrests [detention without trial], and the legal definition of the situation in the West Bank as “armed conflict.” We explained to the officials why putting limits on the administrative arrests practice and matching the legal definition to the actual situation in the West Bank are key Israeli interests, and asked them to bring up these issues in their work within the system. Yediot Ahronoth reported the meetings in the same story but Btselem obviously has nothing to do with the meeting between Peace Now and Danny Ayalon.

I think Michaeli’s response makes for a good illustration of the differences between the practices of B’tselem and the Tel Aviv leadership of Peace Now  (the distinction is made so as not to throw the American Peace Now or the settlements Task Force of the movement into the same pot as Oppenheimer). B’tselem met with civil servants to get the government to change an oppressive practice by the state; Peace Now met with ultra-right, bellicose, hot-headed Danny “Low Chair” Ayalon to offer their help in pretending the state wasn’t that oppressive in the first place. Peace Now rather clumsily tried to play on Israel’s fixation with appearances, but ended up just joining the game themselves.

Apart from providing us with a textbook example of how a centrist movement gets appropriated by the very forces it’s meant to fight, it seems to me this escapade does very poor service to the important work of others, less limelight hungry Peace Now members. It is also likely to do considerable damage to the movement in the long run.