With such an overwhelming number of investigations into Israeli citizens attacking Palestinians in the West Bank closed due to ‘perpetrator unknown,’ one has to wonder why the police have such a hard time finding suspects. 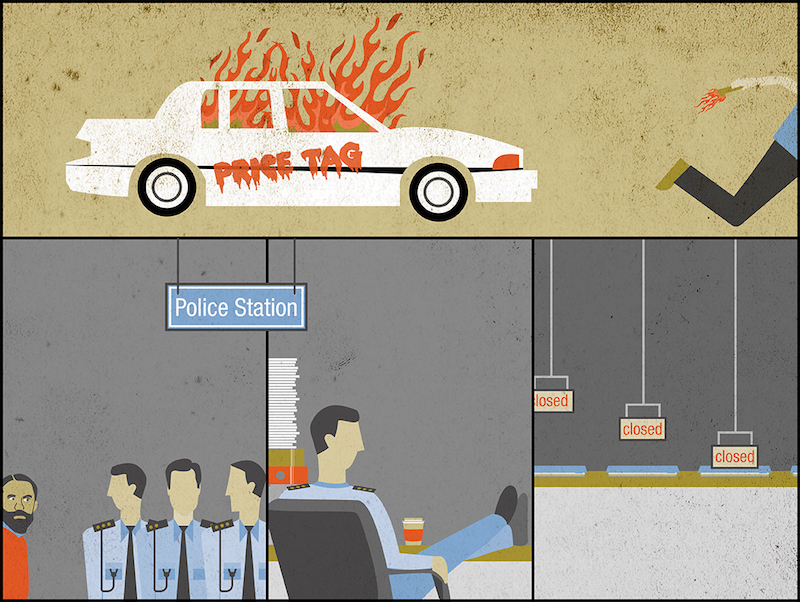 At the center of a new Yesh Din report, Mock Enforcement, is a depressing piece of data: the Israel Police’s fail in 85.3 percent of investigations into Israelis who harm Palestinians in the West Bank. The report, which which deals with Israel’s continued failure to enforce the law on Israeli civilians in the West Bank, examined 996 cases closed by the police, and found that the main reason cited for closing them is “UP” – unknown perpetrator. Five-hundred-and-ninety-three of the cases examined were closed for that reason, which means the police did not find suspects who committed the crime.

The UP clause is the official reason police give explaining their decision to close the cases. Israel Police directives allow for nine reasons for closing an investigative case, among them: lack of criminal culpability, inadequate evidence, the suspect is a minor, and, of course, unknown perpetrator.

Every time a case is closed due to UP, the question arises: just how hard the did the police search for the guilty party? An examination of a series of cases shows that, all too often, the investigation was incomplete at best. At worse, it was farcical. Let’s look at some examples, since there are some facts that simply cannot be conveyed by numbers.

On September 3, 2009, three Israeli civilians – two of them wearing hoods, one with his face visible, holding a stick and walking a dog – attacked Ibrahim Tawil, a Palestinian from the village of Faratha, on his own land. The three attackers were joined by three others, all of them wearing hoods, and together they removed Ibarhim’s belt and assaulted him with it. They then undressed him, stole his wallet and watch and left him in his underwear.

At the police station, Tawil identified the unmasked attacker in a photo lineup. However, an internal police memo claimed that according to intelligence, the person had no connection to the region or the incident. Had the police bothered to make the minimal effort and examine the identified man’s criminal record, they would have found that he had a rich past of violence against Palestinians, including a conviction for using firearms. But police didn’t do that. The suspect was not summoned for an interrogation and the case was closed under the UP clause.

Let’s recap: even when the Palestinian victim identified an attacker known to the police — who attacked him with his face exposed — the police managed to avoid even questioning the suspect. Yesh Din appealed the decision to close the case, and the suspect was summoned for questioning (a year after the incident) and denied his alleged involvement. The interrogator did not ask him for an alibi, and the case was closed – again – under the UP clause.

Tawil, who lives near the Havat Gilad settlement outpost, isn’t very lucky. Two months after the first incident, on November 26, 2009, he was attacked by four hooded people who came from the direction of the outpost — two of them arriving on the scene with dogs. He was beaten with a stone on his head and a stick on his back. The timely arrival of other village residents probably prevented more serious damage. Tawil lodged a complaint with the police, describing the clothes they wore noting that he was also attacked two months earlier.

The police closed the file a month later, again citing the unknown perpetrator clause. Even though at the time the number of people residing in Havat Gilad was 20 at most, the police declined to use the simple method of checking who among them owns dogs fitting the description given by Tawil.

Tawil, of course, is not the only victim whose attacker would never be found. On March 17, 2011, a group of hooded Israeli civilians assaulted Sami Snoubar, a Palestinian working in construction in the settlement of Shiloh. The four assailants hit him on his head with a metal bar and used pepper spray against him. The police’s identification of the suspects in this case was very incomplete, relying on the testimony of a medic who identified two of them, but who qualified his statement by saying he may have seen them at other incidents in the area.

Police interrogated three suspects; all of them refused to cooperate with the investigation. Two of the suspects gave an alibi, which the Israel Police’s West Bank division, displaying its usual diligence, failed to check. The case of the third suspect is more shocking: he refused to cooperate with the investigation, declining to give an alibi, and in response the investigator offered him an alibi (!) by saying that the police will allow him to call his boss so that the latter could provide him with an alibi. The case was closed citing the unknown perpetrator clause.

One of the most appalling cases is that of Yassin Rifa’i. On March 14, 2011 a Civil Administration officer informed Rifa’i, a resident of the Palestinian village Anata, that the residents of the settlement of Talmon uprooted dozens of trees from his land – allegedly as vengeance for a murder. The management of the settlement accepted responsibility for the incident and compensated Rifa’i for the damage.

Police questioned the settlement’s security officer, who was asked whether he knew who committed the crime. The officer responded that he “preferred to keep the information to himself.” That would appear to be obstruction of justice, but the police did not pressure the security officer in any way, and he did not face any disciplinary action. Nor did the police try to find the Civil Administration officer who contacted Rifa’i. After all, it is much easier to scrawl “unknown perpetrator” on the case than try and find who the perpetrator really was.

The picture that arises from these cases (and many others), backed up by data, is as gloomy as it is simple: the investigators are not really trying to find the suspects. It’s unclear whether this stems from a fear that successful investigations would turn the Jewish settler population against the police; whether it the result of subtle messaging coming down the chain of command, saying, “don’t try too hard”; whether this is laziness or a the result of sympathy with the attackers. What is clear is that there is something beyond incompetence, something near-systematic.

And when it becomes systematic, how can you blame the Palestinians who decide to not even bother lodging a complaint?