On Thursday, I traveled to the south with a group of journalists and bloggers to view the construction of new detention facilities around Ketsiot, near the Egyptian border. When completed, the four prisons in the area are meant to be able to hold more than 16,000 inmates, making them, together, the largest detention facility for immigrants in the West.

The trip was organized by ASSAF – Aid Organization for Refugees and Asylum Seekers in Israel, with the participation of Physicians for Human Rights, the Hotline for Migrant Workers and Amnesty International. Aid workers and reporters are not allowed into the prisons, so we were only able to enter the construction site of the Sadot facility, which is still under the jurisdiction of the local regional council. We observed the three other facilities from the outside.

There are some 60,000 African asylum seekers in Israel, most of them from Eritrea and Sudan. Many of them survived atrocities not only in their countries of origin but also on the way. Especially notorious is the situation in the Sinai Peninsula, where refugees are subject, for ransom, to kidnapping, torture, rape, and murder. Those who arrive in Israel are the strongest and the luckiest.

Despite having signed 1951 Refugee Convention, Israel doesn’t review the asylum claims of Eritreans and Sudanese, and doesn’t grant them residency rights. The government has extended group status to all Sudanese and Eritreans, which protects them from deportation, but doesn’t give them the right to work or to any other social services in Israel. Israeli politicians have pledged a tougher approach to the refugees, as a means of deterring others from attempting to cross the border to Israel. 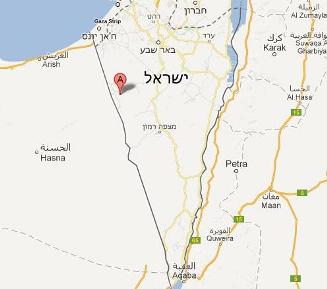 Ketsiot, near the Israeli-Egyptian border

Early this year, the Knesset passed the amendment to the Prevention of Infiltration law, which sanctions the detention of everyone who enters Israeli illegally, including minors, for a minimum of three years. A person from an enemy state (for example, anyone from Sudan) can be imprisoned indefinitely. The construction of the prison camps is intended to enable the implementation of the anti-infiltration law.

The Ketsiot area is one of the most remote corners in Israel, a desert region south of Gaza on the Israeli-Egyptian border. We traveled there on November 1, and the heat became unbearable at around noon. Temperatures easily exceed 100 degrees in the summer, and winter nights are very cold.

The first asylum seekers were brought to Ketsiot prison, in which Israeli used to hold thousands of Palestinian prisoners (500 of them are still there). Right next to it, Israel built the Saharonim facility, which has been operating for several years. Across the road, construction of the Sadot prison is under way, and a couple of miles east, one can see rows of tents that comprise the “Nachal Raviv” holding camp.

This is Nachal Raviv. It was built on army land in order to bypass the local zoning committees and objections expressed by the regional council, which claimed that the conditions were not suitable for humans. The planned capacity is said to be between 2,000 and 4,000 inmates. 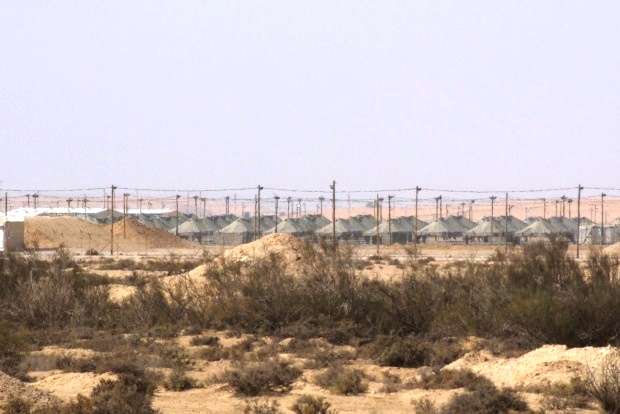 Construction work on the Nachal Raviv site stopped recently. This facility seems to be the least likely to be populated soon, yet it is still being maintained and could become operational on short notice. 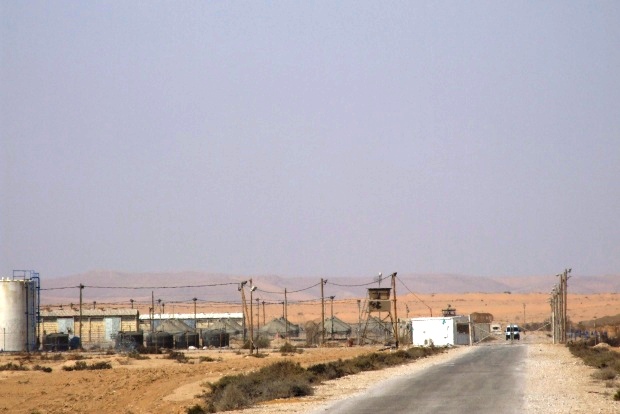 This is the construction site for the Sadot facility, nicknamed “the pizza” for its round shape. Sadot will be able to hold up to 8,000 people.  The regional council has approved the zoning and construction plans for Sadot, and a representative from the council told us that if the construction goes according to plan, the facility will be “suitable.” Still, one should remember that the people who are about to be held here – for indefinite periods of time – have committed no crime. 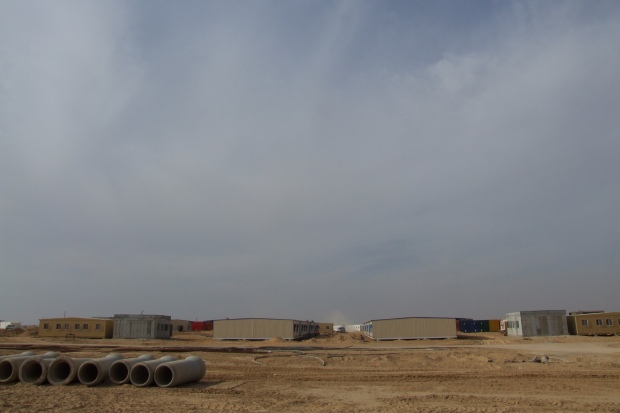 The rooms in Sadot are mobile units. Here is a picture I took through one of the windows. As you can seen, the bunk beds are already ready. The rooms are not air-conditioned and they get very hot in the summer. Sections may have one air-conditioned space where inmates will be able to spend time during the days, but those details aren’t yet clear. 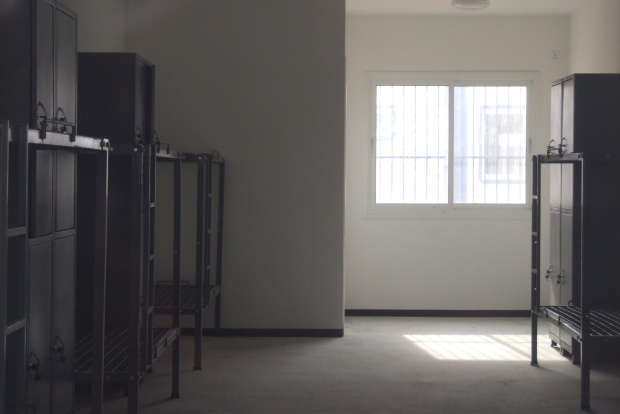 One also needs to consider the effect of holding such a huge population in such conditions for months and years. Even if diseases can be avoided, social problems, from violence to drug abuse, almost certainly can’t. We were told that some inmates in Sadot may be able to work in the area during the day, but those details are not yet clear.

Ketsiot is located on next to Sadot. Taking photos was nearly impossible (it’s an army base), but here is one shot I took through the window. Ketsiot is currently said to hold 500 Palestinians and around 800 asylum seekers, and it has room for more. 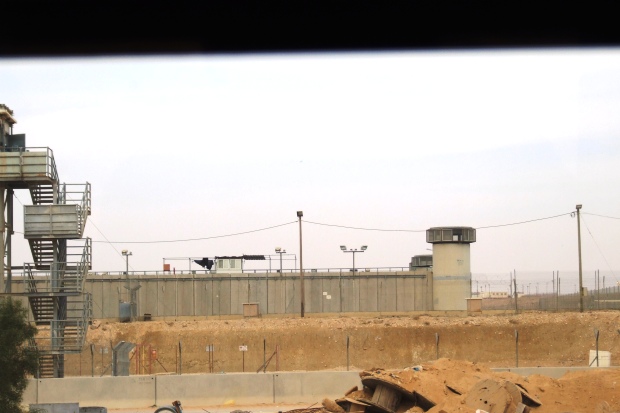 Saharonim prison is just to the south of Ketsiot (the two can be mistaken for one facility). It is currently reported to hold some 1,700 asylum seekers, including women and children (including infants). Some inmates are said to be held there for years. Saharonim has room for up to 3,000 people.

Here is a picture from afar of the center of the Ketsiot/Saharonim compound. 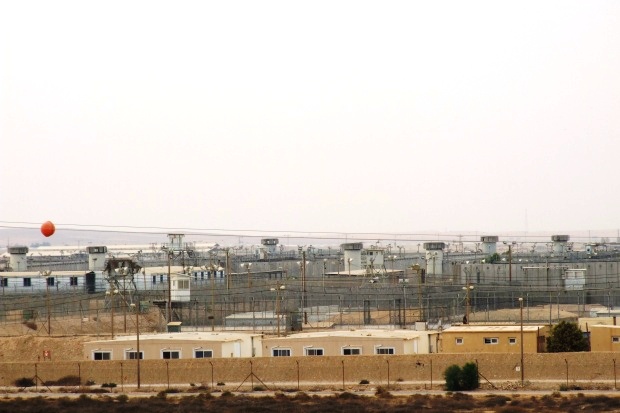 The thought of children growing up between barbed-wire and watchtowers is heartbreaking.

While the new law allows the state to imprison all asylum seekers, there seems to be no clear arrest policy. It seems that everyone who crosses the border these days is sent to prison. The number of those entering Israel is very low these days, thanks to the fence Israel has constructed, but also because IDF soldiers are said to be operating on the other side of the border, where they hand groups of refugees over to the Egyptian army.

The police is also using the new anti-infiltration law in criminal cases involving asylum seekers. A new decision allows the state to detain Africans who were arrested on suspicion of criminal acts, even after those charges were dropped.

Here is the entrance to Saharonim. Once a refugee is there, it’s very hard to get him or her out. 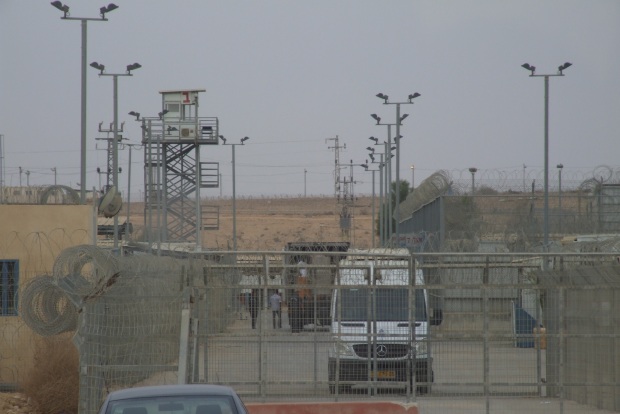 Related:
Abducted from Sudan, tortured in Sinai: Mother and child languish in Israeli jail
A scorching desert jail for asylum seekers, with no way out