A wave of protests in the occupied Palestinian territories against the high cost of living has raised the obvious question as to whether the ‘Arab Spring’ has arrived in Palestine. 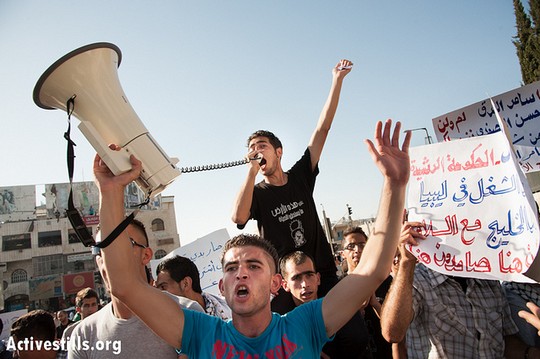 Palestinian youth blocked traffic in Bethlehem in a protest against the rising cost of living and the Palestinian Authority leadership, September 8, 2012. (photo: Ryan Rodrick Beiler/Activestills.org)

Since demonstrations started in the first week of September, Palestinians have regularly blocked roads in major West Bank cities, protesting the high prices for food, fuel, and other basic necessities, many of them criticizing the Palestinian Authority and calling for the resignation of Prime Minister Salam Fayyad. Protesters also targeted the Oslo Peace Accords, which were signed with Israel 19 years ago last Thursday. Many called for the abolition of the Paris Protocol, an annex to the Oslo agreement that preserves Israeli domination of the Palestinian economy. 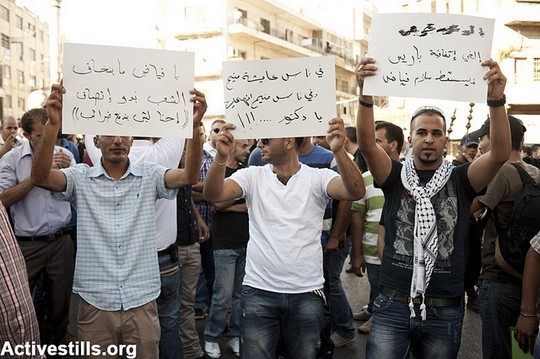 Palestinians block traffic in Ramallah’s busy Al-Manara square on September 4, 2012, protesting the high cost of living and calling for the resignation of the Palestinian National Authority’s PM Salam Fayyad and an end to his neoliberal “austerity” policies. (photo: JC/Activestills.org) 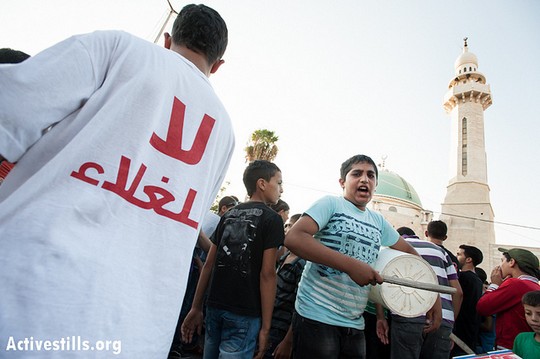 A Palestinian youth wears at T-shirt saying “No to High Prices” while another beats a plastic bucket in a march in the West Bank city of Bethlehem, September 10, 2012. (photo: Ryan Rodrick Beiler/Activestills.org) 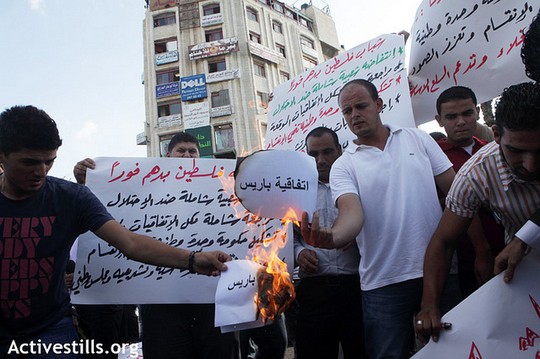 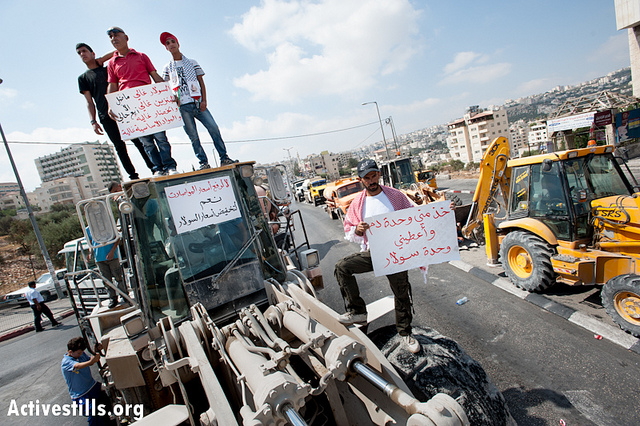 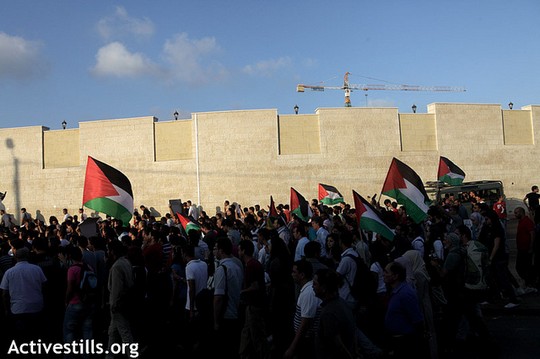 Palestinians march in front of the Muqata, the Palestinian Authority headquarters, in the West Bank city of Ramallah, September 11, 2012. Protesters condemned continuous increases in taxes, cuts to public sector wages, and the Paris Protocol on Economic Relations. Some protesters also called for the end of the Oslo Accords. (photo: Anne Paq/Activestills.org) 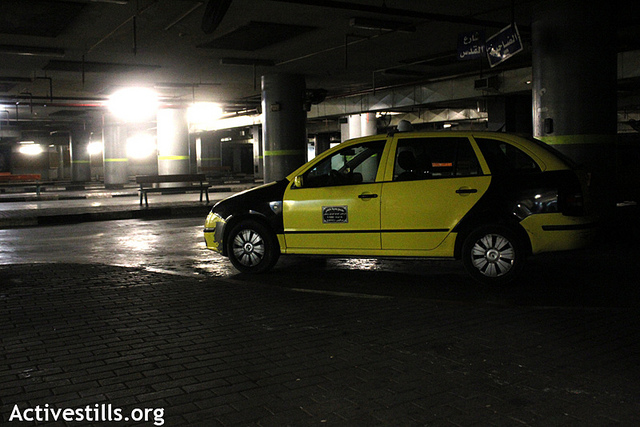 The main taxi station in the West Bank city of Nablus seen empty and closed during a public transport strike on September 10, 2012. (photo: Ahmad Al-Bazz/ Activestills.org) 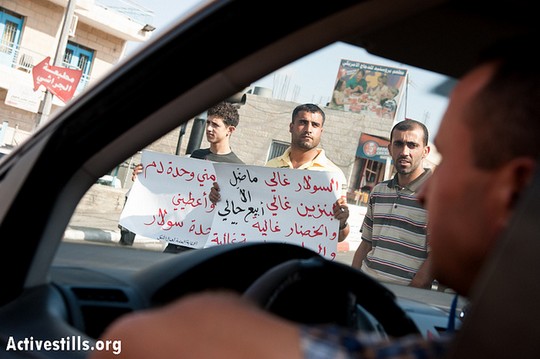 A Palestinian motorist is confronted by taxi and truck drivers blocking traffic at Bethlehem’s Bab Iskak intersection to protest the high cost of fuel and food, September 10, 2012. The sign on the left reads, in effect, “Take my blood, and give me the same amount of diesel.” (photo by: Ryan Rodrick Beiler/Activestills.org)

In response, Fayyad announced last Tuesday numerous measures aimed at placating the demonstrators, including a promise to lower fuel prices to their previous levels, a cut to Value Added Tax (VAT), and the payment of salaries to public sector employees, which have been long delayed. He pledged that these costs would be paid for by cuts to top-level salaries across all PA ministries. 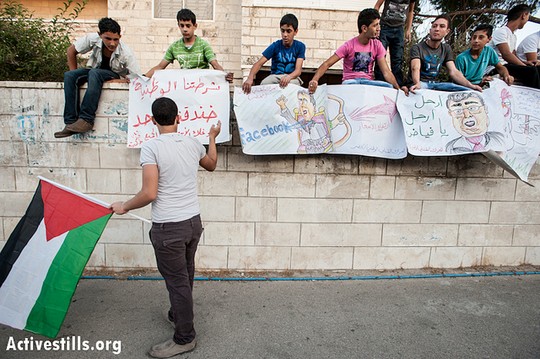 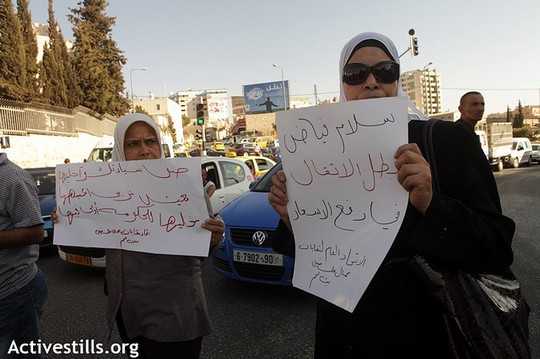 The same day Fayyad announced his measures, Israel reinforced the notion that the PA — through its various agreements and security cooperation — is itself a tool of occupation, by releasing a NIS 250 million advance on tax payments collected on behalf of the PA, and asked that other foreign governments provide funds as well, to help it weather the current crisis. Israeli Prime Minister Benjamin Netanyahu went as far as to say that such measures were “in our joint interest.” However, in response to PA requests to reform the Paris Protocol, Israeli officials shut the door on Monday, claiming that any review of the agreement could not be treated separately from the Oslo Accords but must be part of new comprehensive peace talks. 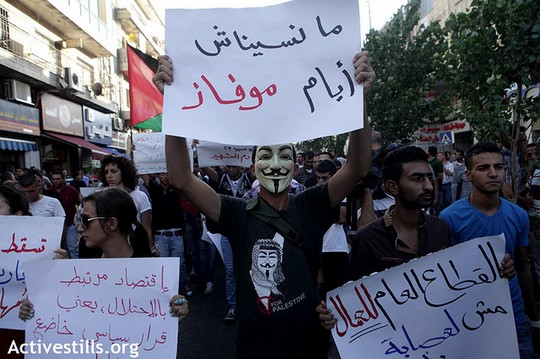 A masked protester wears a sign reading “We did not forget the Mofaz days” (referring to earlier protests against the planned visit of Israeli Vice Prime Minister Shaul Mofaz, which were violently repressed by the PA police), September 11, 2012. (photo: Anne Paq/Activestills.org) 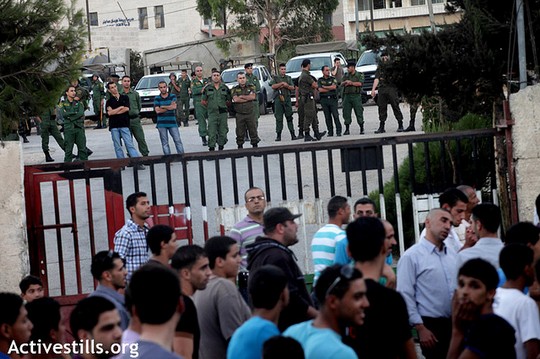 Marchers pass Palestinian police watching from behind iron gates at the PA headquarters in the West Bank city of Bethlehem, September 10, 2012.

Though demonstrations have lulled in the wake of Fayyad’s announcement last week, more strikes and marches have been announced for the coming days, indicating that this movement is far from over, with both activists and commentators wondering if their focus will move beyond the PA, and challenge the occupation itself. As Jamal Jum’a, director of the Stop the Wall campaign, stated in an interview with The Real News, “All that has been done [by the PA] we can’t find anything that we can rely on… I know this is coming out of the limitation of the PA. If you want to be serious, you need to confront Israel.” 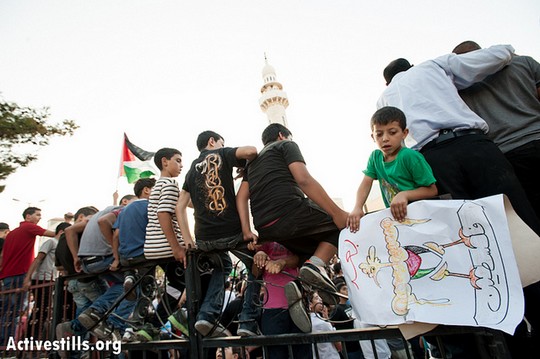 A Palestinian boy holds a poster replacing the eagle in the symbol of the Palestinian Authority with a chicken, September 10, 2012. (photo: Ryan Rodrick Beiler/Activestills.org)