International volunteers join Palestinians and Israelis to build ‘alternative facts on the ground’ in defiance of Israeli demolition policy. 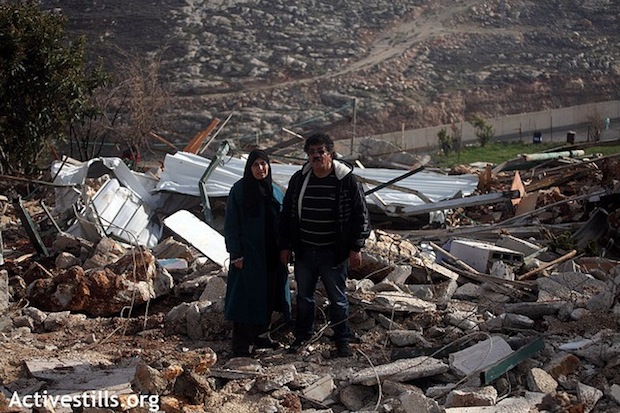 Arabiya Shawamreh and her husband Salim stand in the ruins of their house that Israeli authorities demolished on January 23, 2012 for the fifth time. The same night, between 11:00 pm and 4:00 am, seven other homes were demolished in Anata, displacing more than 60 Palestinians. (Photo: Anne Paq/Activestills.org)

Six months after Israeli bulldozers demolished the house of Salim and Arabiya Shawamreh, Palestinian workers, Israeli activists, and international volunteers gathered to celebrate their successful efforts to rebuild it. Dubbed “Beit Arabiya” (“Arabiya’s House”), and used as a peace center by the Israeli Committee Against House Demolitions (ICAHD) since 2003, it has long been a gathering place for ICAHD’s efforts to resist the Israeli government’s discriminatory housing policies that systematically refuse building permits to Palestinians and then demolish houses that are built regardless.

Left: Beit Arabiya in August 2, 2007. Right: the house after it was demolished for the fifth time, January 25, 2012. Located northeast of Jerusalem in the West Bank town of Anata, it has become a symbol of resistance to Israeli demolition policy. (Photo: Keren Manor/Activestills.org)

More background from the Israeli Committee Against House Demolitions:

More than two hundred people gathered in the West Bank town of Anata to celebrate the rebuilding of Beit Arabiya, home of Salim and Arabiya Shawamreh family. Since 1998, this home has been demolished five times by the Israeli government but rebuilt each time by the Israeli Committee Against House Demolitions (ICAHD) as a political act of resistance to Israel’s demolition policies, which are illegal under international law. 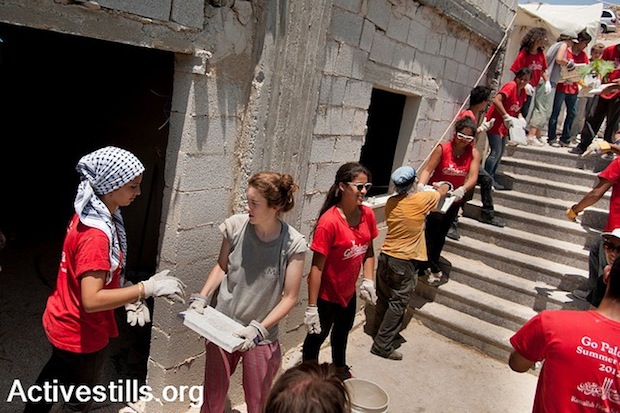 The home was rebuilt during ICAHD’s tenth annual rebuilding camp that attracted more than thirty internationals that stood side by side with Israelis and Palestinians who refuse to be enemies, demonstrating that there are partners for peace. Within two weeks, the pile of rubble left after the demolition of the house in the middle of night on 23 January earlier this year, was transformed into a fully functioning house with an extensive terrace, made possible by nearly one hundred additional volunteers, including international youth, part of summer delegations to Palestine who worked with temperatures soaring over 30 degrees C and with limited water supplies. 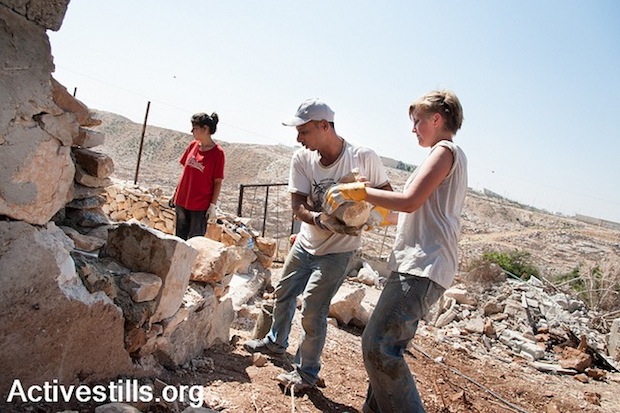 An international volunteer hands a stone to a local Palestinian contractor. (Photo: RRB/Activestills.org)

Every year hundreds of Palestinians are forced from their homes, homes built on land they own. Since 1967 Israel has demolished more than 26,000 Palestinian homes in the West Bank, East Jerusalem and Gaza. ICAHD has rebuilt a total of 186 Palestinian homes illegally demolished by Israel and is determined to see this cruel policy stop. 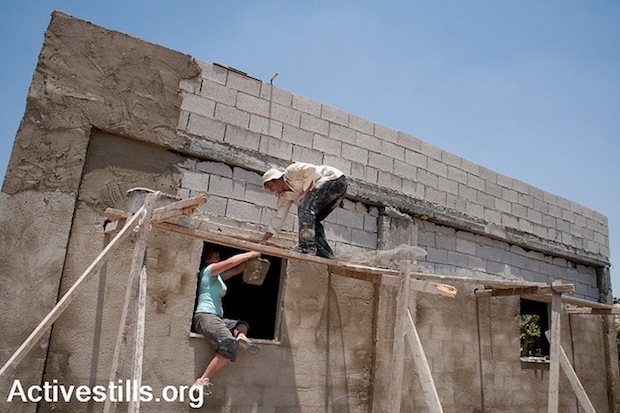 An international volunteer hands a bucket of cement to a local Palestinian contractor plastering the house’s exterior. (Photo: RRB/Activestills.org)

ICAHD Director, Prof. Jeff Halper, calls the rebuilding “an overtly political act of defiance. By rebuilding, we set alternative facts on the ground.” The Shawamreh family applied three times to the Israeli Civil Administration for a building permit and was refused each time, as were 94% of Palestinian permit applications since 1993. Having no other alternative, they proceeded, as have thousands of other Palestinian families, to build their home, in which they lived for five years despite having been issued a demolition order. 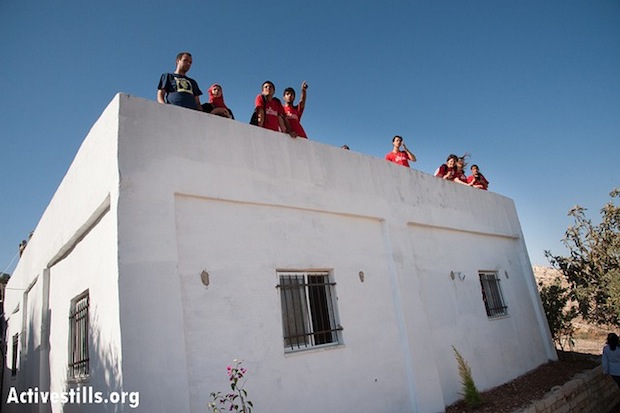 Local and diaspora Palestinian volunteers take in the view atop the newly rebuilt house. (Photo: RRB/Activestills.org) 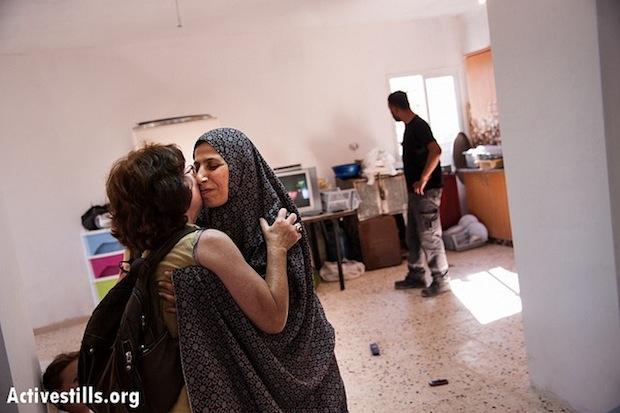 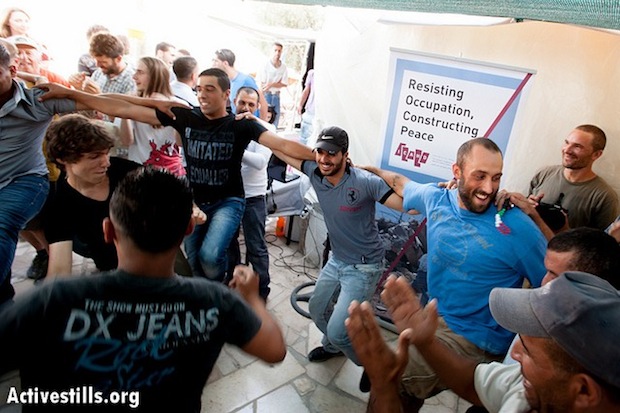 emailemailemail
Before you go…
A lot of work goes into creating articles like the one you just read. +972 Magazine is nonprofit journalism, owned by many of our writers, editors, and journalists. In order to safeguard that independent voice, we are proud to count you, our readers, as our most important supporters. With your support, we can keep +972 Magazine a strong, independent, and sustainable force helping push the global discourse on Israel/Palestine.
DONATE
More About activestills 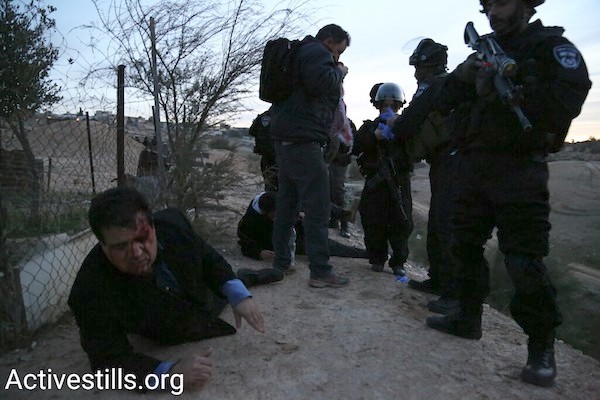 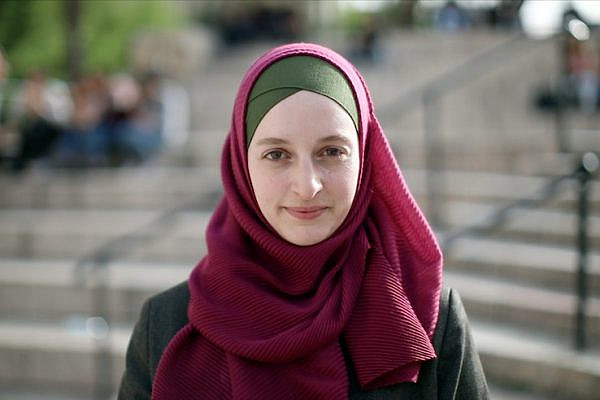 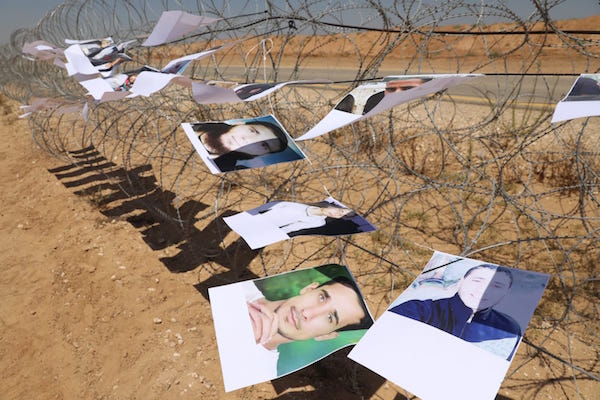