Using haunting aerial photographs of the Negev Desert, American artist Fazal Sheikh challenges the notion that the desert was an unpopulated land before Zionism made it bloom.

In “Caravan Song,” the late Arik Einstein sings of a caravan of Zionist immigration and settlement that began in the 19th century and continues to this day. Most of the song is in his own voice, apart from one line in which he lovingly imitates David Ben-Gurion promising that the Negev will bloom.

It is less acceptable today to talk of a people without a land populating a land without a people, but that is not the case for the Negev, still seen as an empty desert waiting for Jews to finally make it flourish.

A new exhibition by American artist Fazal Sheikh challenges this mythology through haunting aerial photographs of the area, which expose the many layers of its history. The project, named “Desert Bloom,” was a result of collaboration with academics such as Eyal Weitzman and Oren Yiftachel, local activists like Haia Noach, Nuri al-‘Oqbi, and Siyakh al-Turi, and experts on deciphering aerial photographs.

The resulting images were part of a recent exhibition (“This Place”) in the Tel Aviv Museum of Art. The exhibition will be traveling to the Norton Museum of Art, in West Palm Beach, Florida, from October 15, 2015 to January 15, 2016, and then to the Brooklyn Museum of Art in New York, from February 12 to June 5, 2016.

Below are five of these images, together with their captions: 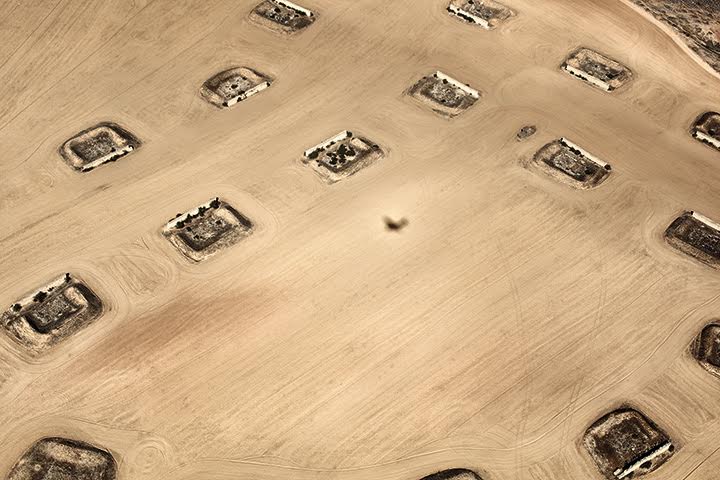 5 • Latitude: 3 1°2 5‚ 1 4”N / Longitude: 3 4°2 8 ‚ 2 4”E
October 10, 2011. Decommissioned British-era munitions storage base near the Gaza border, constructed in the early 1940s in anticipation of an attack by the Germans from North Africa during WWII. Shown here are some of the 170 soil mounds built in a square missing rib formation as fortification and protection from the wind. Low walls along one side are to prevent an explosion from one storage space igniting a neighboring site. Following the German defeat by the Allied forces in the battle of al-‘Alamein, the fortifications proved unnecessary, and have not been used since 1942. The site is on the historical Bedouin villages of Abu Mwēlek/Hasanāt, of the Tarabīn tribe, which were evacuated during Operation Yo’av. Nearby is Kibbutz Be’eri (lit., “my well”), established in 1946 as one of 11 “points” of Jewish settlement planned to assure a Jewish presence in the area prior to the partition of Palestine. 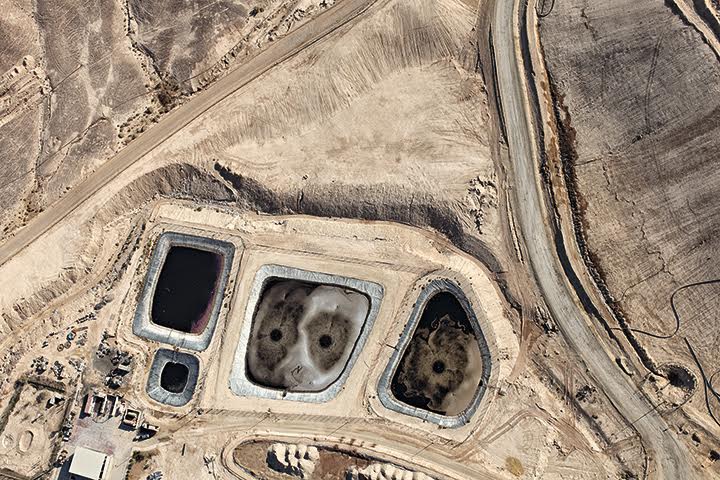 10 • Latitude: 31°8‚ 7”N / Longitude: 35° 12‚ 25” E
November 22, 2011. Evaporation ponds at the Arad Phosphate Mine. Resources in the Negev include copper, iron, manganese, phosphates, and uranium. The Arad facility mines the highest grade phosphates, with estimates of between 30,000 and 60,000 tons of uranium contained in low-level phosphate ores, much of which is extracted in three mines belonging to parent company Rotem Amfert Negev Ltd. Established in 1952, initially as Negev Phosphates, the company’s Arad site is adjacent to the Dimona Nuclear Research Center. The state acknowledges the existence of the site, but maintains a policy of nuclear ambiguity, neither confirming nor denying that it contains nuclear weapons. Constructed in secret (beginning in 1958) with French assistance, outside the International Atomic Energy Agency (IAEA) inspection regime, the airspace over the nuclear research center is closed, and the area around it is heavily guarded and fenced off. Bedouin tribes are kept 15–20 kilometers from the fence. 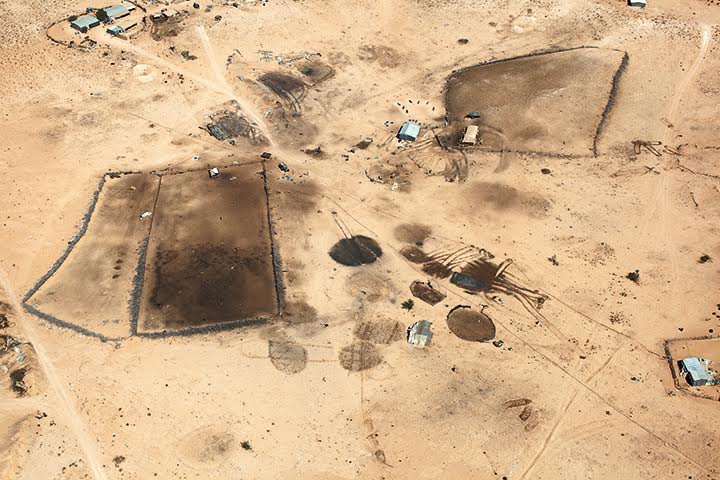 18 • Latitude: 31 °0‚ 60”N / Longitude: 34° 43‚ 4” E
October 9, 2011. Abu Asa family homestead in the vicinity of the recognized Bedouin town of Bīr Haddāj, of the Azāzme tribe. The dark circular stains in the center of the image indicate the former presence of sire, livestock pens for camels, goats, and sheep. Staining is created by the bodily fluids of the herds that were kept there. Each year, the pens are shifted and the former space disinfected by fire. The stains remain on the ground for several years, the gradient of their saturation indicating how many rainy seasons have washed them away. Such traces help gauge the minimum duration of their presence in years. In 1978 Bīr Haddāj was declared a closed military area, forcing its inhabitants to relocate to Wādi al-Na’īm, near Beersheba. In 1994, when they learned that land on which they had previously settled was no longer being used for military purposes but had instead been converted into a Jewish farming community, they returned and settled next to the new moshav. 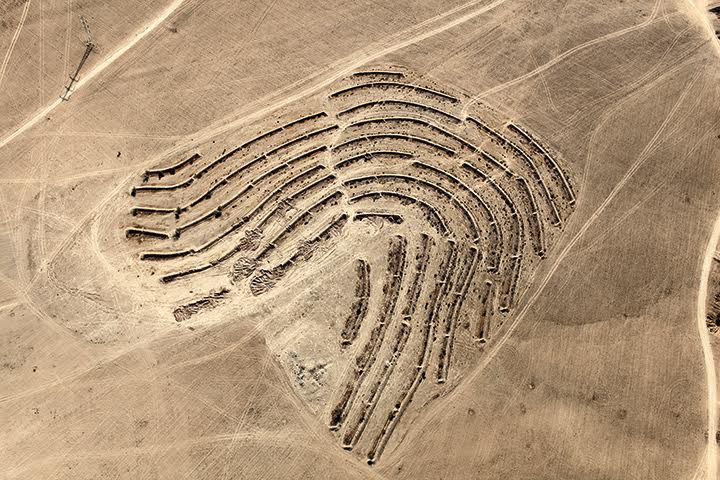 30 • Latitude: 31° 18‚ 50”N / Longitude: 34° 40‚ 58” E
October 4, 2011. Plantation work for the Ambassador Forest organized by the JNF, using the method of “savannization”: a mixture of sparsely scattered acacia or eucalyptus trees with bushes and grass between, as found in the savannah region. Irrigation comes from long terraces that collect rainwater, optimizing the water retention. The fields around the planted area are cultivated by Bedouins, and are distinguished by the shallow plowing or “scratching” technique of cultivation. The small spots within the field show where wheat was collected in previous years. The forest was planted atop the Bedouin village of Abu ‘Abdūn, of the Tiyāha tribe, evacuated and destroyed in the winter of 1948. The path, accompanied by a pair of shallow fences that run diagonally from lower left to top right through the center of the image, coincides with the planned route of a railway line, construction of which began in early 2012. The forested area has since been overridden. 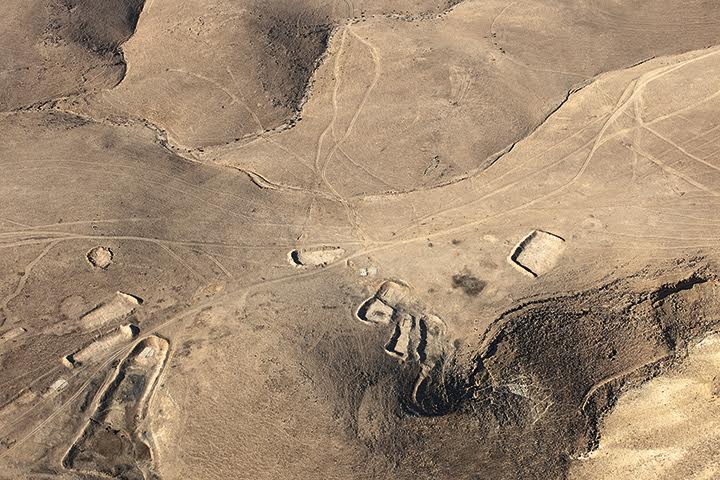 38 • Latitude: 31° 12‚ 45” N / Longitude: 35° 11‚ 60” E.
October 4, 2011. Remains of Bedouin homesteads, south of Arad, near the unrecognized villages of al-Qur’ān and Qabbū’a. Both Bedouin and Jewish local residents from Arad oppose a current government plan to establish a phosphate quarry on the site, stating health concerns including potential exposure to radioactive dust. The Bedouin settlement was evacuated when the Israeli military established a live-fire zone on the site, which will eventually be replaced by the mine. In winter people and livestock stayed within the enclosures on the lower slope and in summer they moved to the higher slopes. The earthwork enclosures below the dirt road that crosses from left to right were built by the Bedouins around places where their tents used to stand, for instance on the concrete floor within the gun-shaped enclosure on the left. The raised earthworks above the dirt road show traces of heavy mechanical equipment, which indicates that they are military enclosures for live-fire training. At top right a train of camels can be seen, led by one person.