A French diplomat and several of her European colleagues were manhandled today by Israeli troops near the recently demolished village of Khirbet al-Makhul in the West Bank, Reuters said. The diplomats were accompanying a truck of tents and emergency aid supplies, and the French diplomat, Marion Castaing, was physically dragged out of the truck and thrown to the ground in disregard of her diplomatic immunity. The troops then confiscated the truck and drove it away.

A picture, below, taken by an eyewitness at the scene (who wishes to remain anonymous) and sent to The National correspondent Hugh Naylor shows Castaing lying at the feet of armed troops. Judging by the uniform, the troops belong to the paramilitary Border Police, which handles much of the grunt jobs of the occupation. 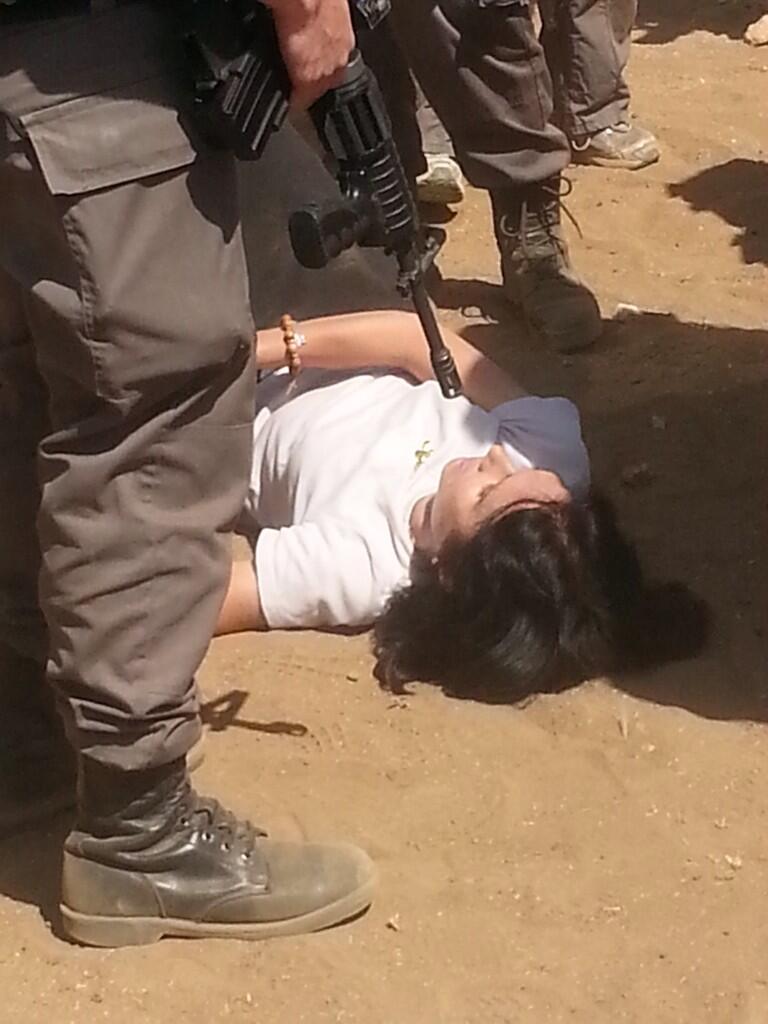 The diplomat herself sounds understandably livid, commenting to Reuters that “this is how international law is respected here.” There has been no official comment from the French embassy as of yet.

The IDF issued an announcement a few hours later, alleging that ” dozens of Palestinian and European activists [sic] tried to set up an illegal outpost in an area close to the community of Hemdat. The Palestinian activists threw stones at IDF forces that arrived to evict them. Three rioters who refused to be evicted and attacked the soldiers were detained, and the truck was confiscated.” A Red Cross convoy that set out for the same village was stopped and turned back on Tuesday.

The original Reuters report seems to have been filed by correspondent Noah Browning, but the byline in subsequent reprints was amended to Crispian Balmer, the Reuters bureau chief for Israel and the Palestinian Territories.

The following video was uploaded by Palestinian filmmaker Enas I. al-Muthaffar. In the clip, there is no visible stone throwing or other violent activity on the side of the aid workers, diplomats or Palestinians prior to the arrests and use of stun grenades.

Correction:
This article originally questioned whether the border policeman’s weapon was pointed at Castaing in the above image. As can be seen in the image, the officer is simply holding the weapon at his side.