Israeli soldiers have been harassing Palestinian activist Issa Amro since he released a video of a soldier cocking his weapon at two youths. ‘They know I am a moving camera,’ he says.

Palestinian non-violent activist Issa Amro is seen in the following photo, taken on May 28, being punched by an IDF soldier (the soldier’s identity is unknown and this specific moment does not capture the punch that achieved contact). Amro, who lives in Hebron, is the founder and director of Youth Against Settlements and one of the most prolific and effective documentarians of Israeli occupation in the city. 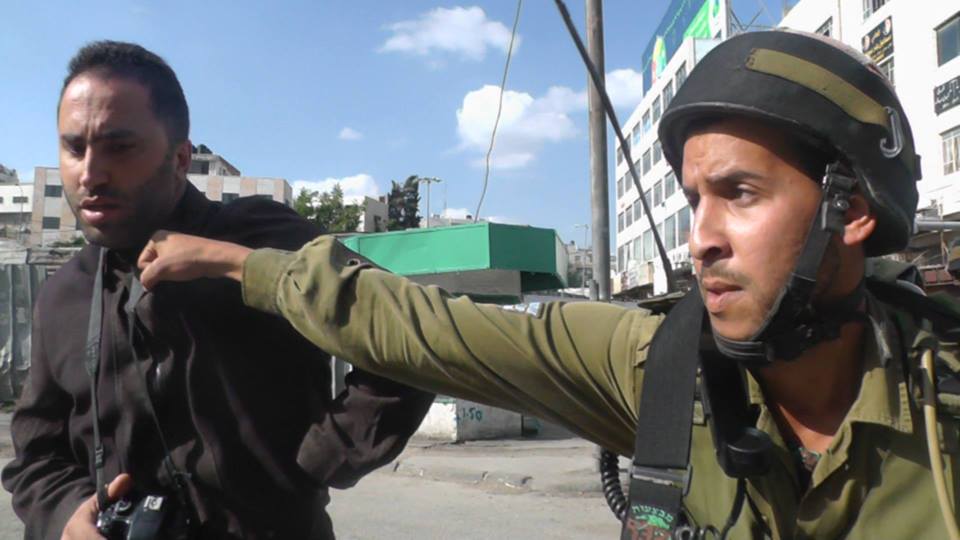 Amro, who has been detained and arrested more times than he can count despite not a single indictment ever being filed against him, told +972 he has been harassed by this specific soldier over the last few weeks. He suspects the reason is that last month he released a video (which went viral) of an Israeli soldier cocking his rifle at a Palestinian teenager in Hebron, and later threatening to “put a bullet in the head” of another Palestinian filming the incident.

David Adamov (a.k.a. David Nahlawi), a soldier in the Nahal Brigade who has since been dismissed (for assaulting his commander, not for this incident), became a  Facebook sensation among Israeli soldiers who lined up to defend him and proclaim, “we are all David Nahlawi.”

Amro said the soldier in the photo has been following him around and detaining him while he films clashes between soldiers and Palestinians in Hebron recently. “They know I am a moving camera,” Amro told +972. He said he was detained several times last week, sometimes several times in one day.

“Last Monday, he detained me twice, once at 6 a.m. and once in the afternoon. He forced me to go in and out of the checkpoint more than 10 times,” Amro said. He said he was detained again on Tuesday, while being cursed at and verbally abused.

“I filled up with anger inside. The soldiers are using the power of occupation to humiliate me and to take revenge on me for doing something legal. I have no protection at all, no one to complain to, no one to give [me] the feeling of protection,” Amro said.

Amira Hass reported in Haaretz on another incident last month in which Amro insisted it is the army’s job to protect him from settlers. The soldier replied that he only protects Jews, adding: “Who protects you? You fucker – the next chance I get I’ll shoot you.”