A freelance photographer who documented three young Jewish women attacking an Arab woman in Jerusalem is being sued for defamation after Israel’s most popular television news channel published her photos. Now she is asking for the public’s help to fund her legal defense. 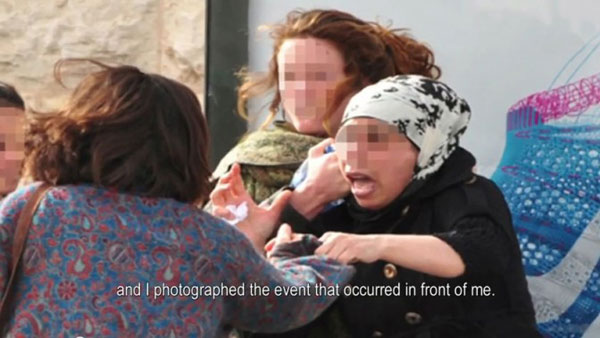 The incident in Jerusalem, as photographed by Dorit Jordan-Dotan. (Screenshot from the fundraising campaign.)

Dorit Jordan-Dotan, who last year photographed a group of Jewish women attacking an Arab woman in Jerusalem, launched a campaign last week to fund her legal defense; the Jewish women whom she documented in the scuffle are suing her for NIS 300,000 (roughly $80,000) in damages. Under the banner, “Political lawsuit against freedom of expression,” Jordan-Dotan is asking for the public’s help — through an Israeli website similar to Kickstarter — in funding her legal defense. At the time of writing, she had raised over two-thirds of the requested amount (NIS 30,000).

In February 2013, Jordan-Dotan, an independent documentary photographer, saw a scuffle break out at the Kiryat Moshe light rail station in Jerusalem. She picked up her camera and documented what she saw. According to the three plaintiffs, Shafra Richter, Ruth Meshulami and Chen Alfas, who are being represented by Attorney Doron Nir-Zvi, Jordan-Dotan caused them great harm by distributing the photos in which they can be seen striking the Arab woman, “without putting forth the photographs from when the incident began, from which it would be possible to see that the plaintiffs were defending themselves against the same Arab woman.” According to them, Jordan-Dotan “provided the deceptive photographs to media outlets that distorted reality, whereas the light rail security cameras show that it was actually the Arab woman who started the skirmish.”

Another claim of theirs touches on the fact that Jordan-Dotan did not blur the young Jewish women’s faces, despite the fact that they were minors at the time of the incident, and she therefore committed a criminal offense and violated their privacy. The plaintiffs also claim that in an interview to Channel 2 News, Jordan-Dotan said that the Arab woman was the victim of an attack, which they claim, is contrary to reality. Channel 2 News is also being sued by the three women.

On behalf of his clients, Attorney Nir-Zvi demanded in Jerusalem Magistrate’s Court that each of his three clients be compensated NIS 100,000 (roughly $26,000). Additionally, he asked that Jordan-Dotan and Channel 2 News be ordered to “destroy all of the publications and photographs relating to the plaintiffs that exist on the Internet.”

From the archives: Press freedom in Israel

Through her attorney, Yadin Elam, Jordan-Dotan filed her response to the suit last week. According to her, she documented the violent incident that she saw and passed along the documentation to media outlets in good faith. She added that she did not witness the start of the scuffle and did not document that part of the confrontation. She passed along all of the photos in her possession to media outlets, she emphasized, without any selection or filtering on her part. According to Jordan-Dotan, she did not know and could not have known what the plaintiffs’ ages were, and the moment that she was made aware that they were minors at the time of the incident, she removed those photos in which their faces could be seen.

According to Jordan-Dotan, the lawsuit was filed against her is a frivolous suit designed “to send a clear, tough and threatening message to anyone who in the future may find themselves in the defendant’s shoes — who sees such an incident and dares to give their photos, testimony and impressions to a journalist.”

“After the photos were published in the media, the defendant suffered mudslinging and slander attacks, including threats and insults via email and Faceook as well as responses in newspapers,” Jordan-Dotan says. Attorney Itamar Ben-Geir, who was representing the plaintiffs at the time, even raised the possibility that Jordan-Dotan herself was part of a conspiracy with the Arab woman who was attacked. In light of that claim of defamation, Jordan-Dotan is demanding counter-damages of NIS 100,000 (roughly $26,000) from the plaintiffs.

“It is incumbent upon the plaintiffs to take up their claims about the publication with the publishers, and not with the defendant,” Jordan-Dotan added. 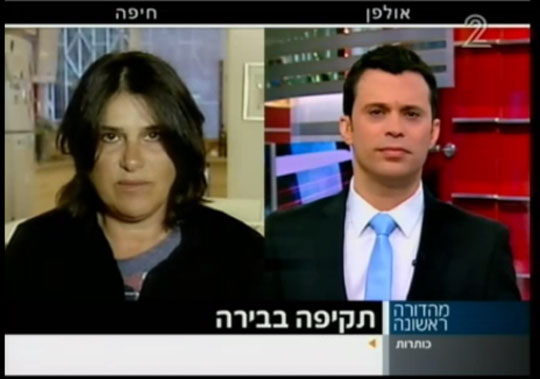 Photographer Dorit Jordan-Dotan being interviewed on Channel 2 News about the incident she documented, February 26, 2013. (Screenshot)

Channel 2 News claims, through its attorneys Yishgav Nakdimon and Dakela Biran, that the reports which it published about the incident were “truthful reports based on photographic evidence of the incident — that took place in a public space — and about the police investigation that was opened into it.” Channel 2 added that in doing so it was — legally — carrying out “its journalistic and public duty to publish materials of public interest.”

Channel 2 goes on to argue that, “the photos that were published in the news reports speak for themselves and prove that the young Jewish women photographed in them, attacked the Arab woman and struck her with their hands.”

“The reason that the attack began is of no importance,” Channel 2 News argued. “And even if the physical attack shown in the pictures was provoked somehow by the Arab woman, that does not lessen the severity of the young women’s violent response, which is shown in the photos.”

Channel 2 News also claims that there is nothing in its report that could defame the plaintiffs. In addition, the company’s counsel emphasized, its employees did not know that the photographed women were minors at the time of publication.

In its response to the suit, Channel 2 News points out that it removed from its website — “Mako” — the interview with Jordan-Dotan as well as another report on the incident, without admitting to any of the claims against it. In addition, the company wrote, it blurred the faces of the Jewish women in other articles that remain on its website. However, the Channel 2 interview with Jordan-Dotan from immediately after the incident remains available on the website of Channel 2 concessionaire “Reshet,” which also publishes material from Channel 2 News.

Related:
A frightening new era of Jewish-Arab relations in Israel
Palestinian beaten by Jews in J’lem: ‘Attacks against us happen every day’
Press freedom in Israel: Democracy in the age of self-censorship