For two days on a freezing West Bank hilltop, the Bab Al-Shams village stood as a symbol of Palestinian nonviolent resistance to the planned expansion of settlements that would cut the West Bank into two and deny territorial contiguity to any hypothetical Palestinian state. 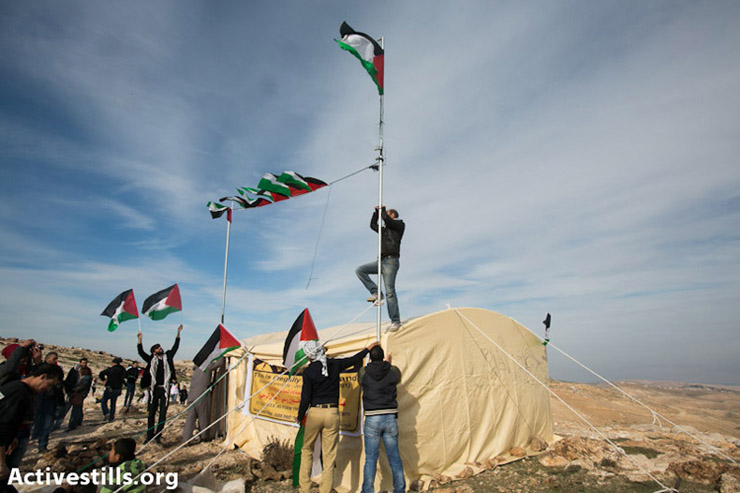 Activists raise the Palestinian flag over the Bab Al-Shams, reclaiming a Palestinian privately owned hilltop in the E1 area of the West Bank, currently slated for settlement by Israeli authorities.

On the morning of Friday, January 11, Palestinian activists from the various Popular Struggle Committees established a tent camp on a hilltop in an area east of the West Bank known as E1, calling it the Bab Al-Shams (Gate of the Sun) village.

The land in E1 has been slated for development by Israeli authorities in order to link the Jewish settlements in East Jerusalem with that of Ma’ale Adumim, effectively cutting the West Bank into two and denying territorial contiguity to any hypothetical Palestinian state.

The activists provided historical evidence that Bab Al-Shams was established in an area originally belonging to the nearby al-Tur village, and that the land was privately owned by Palestinians who gave their consent to building the village.

The activists at Bab Al-Shams immediately gained both widespread international support and an ambiguous Israeli High Court statement, which granted the tents a six-day delay of any eviction. However, Israeli Prime Minister Benjamin Netanyahu ordered the site to be evacuated immediately by police, under the pretext that while the tents could stay, the activists had to leave.

In the early hours of Sunday the 13th, Bab Al-Shams was attacked by large numbers of Israeli security forces who loaded the activists on buses to be taken off the site. Many international and Israeli media outlets were prevented from covering the eviction, and at least six activists suffered injuries and were taken to the hospital.

Notwithstanding the harsh and immediate response by the Israeli authorities, Bab Al-Shams was a powerful reaffirmation of the right to and the necessity of maintaining a Palestinian presence in the E1 zone, and remains an inspiration for all those who seek to challenge the Israeli occupation directly. 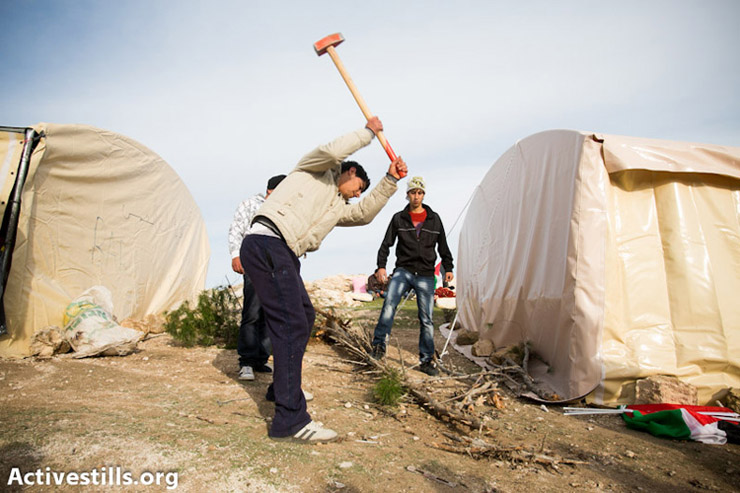 Palestinian activists cut wood to make bonfires during the establishment of Bab Al-Shams. 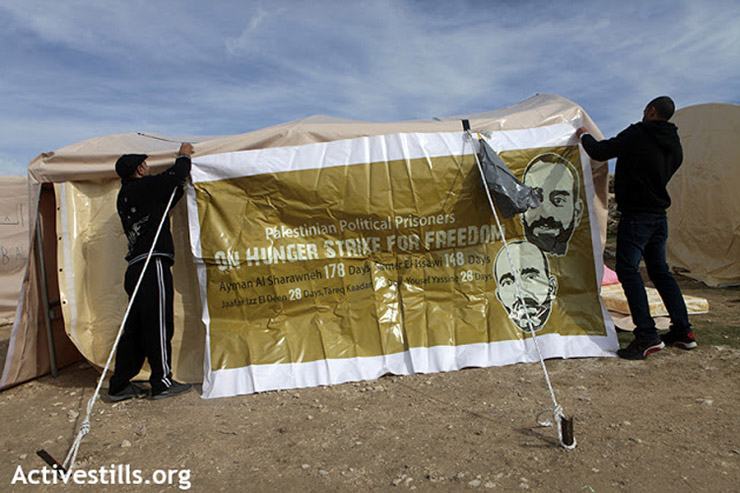 A poster in solidarity with Palestinian political prisoners on hunger strike against arbitrary detention is hung on a tent in the Bab Al-Shams village. 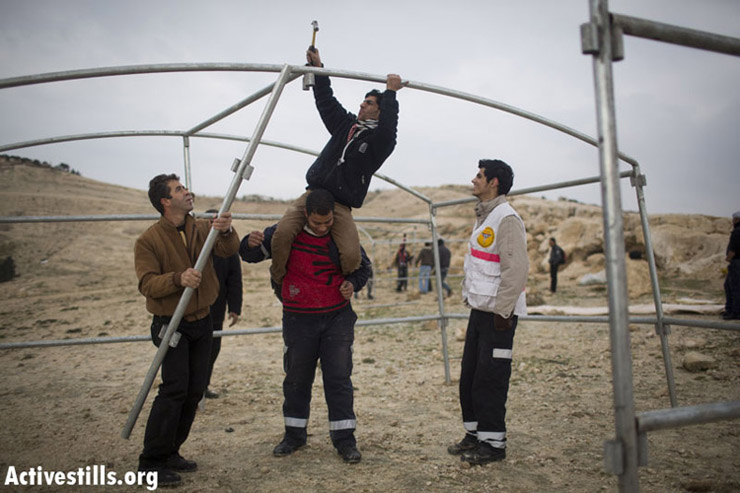 Activists from all of Palestine, excluding Gazans who are not allowed to exit the strip, took part in the establishment of the village, with the organizational support of the Popular Struggle Coordination Committee. 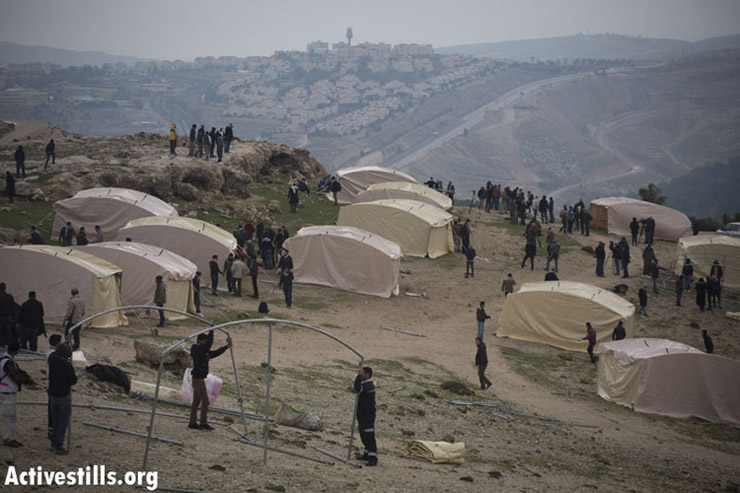 The Bab Al-Shams village seen against the background of the nearby Ma’ale Adumim, a large Israeli settlement at the core of Israel’s ongoing policy of establishing Jewish sovereignty in strategic locations of the West Bank, making the establishment of a Palestinian state with East Jerusalem as its capital increasingly impossible. 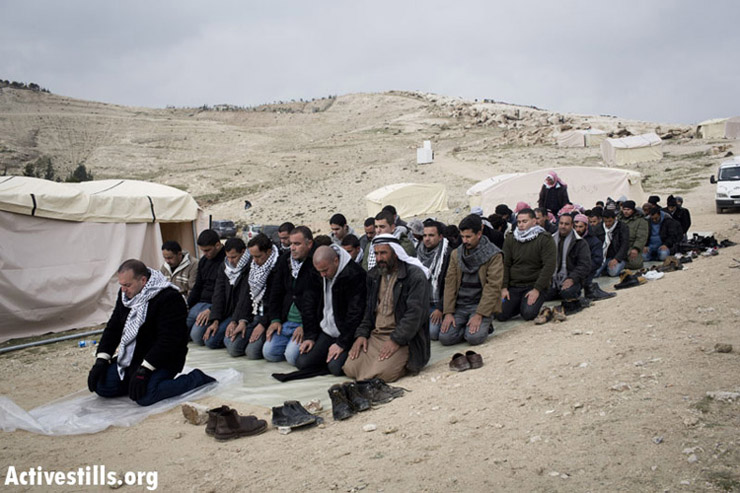 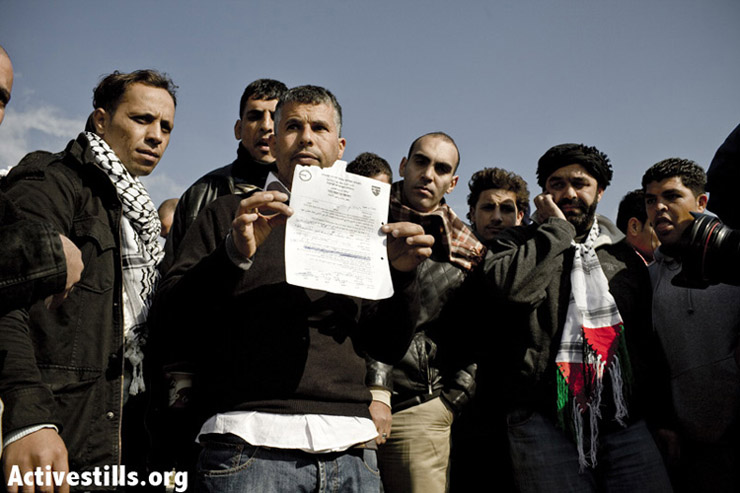 A popular struggle activist shows the eviction order for Bab Al-Shams handed by Israeli police less than 12 hours after its establishment, notwithstanding an Israeli court ruling granting a 6-day stay-of-eviction. 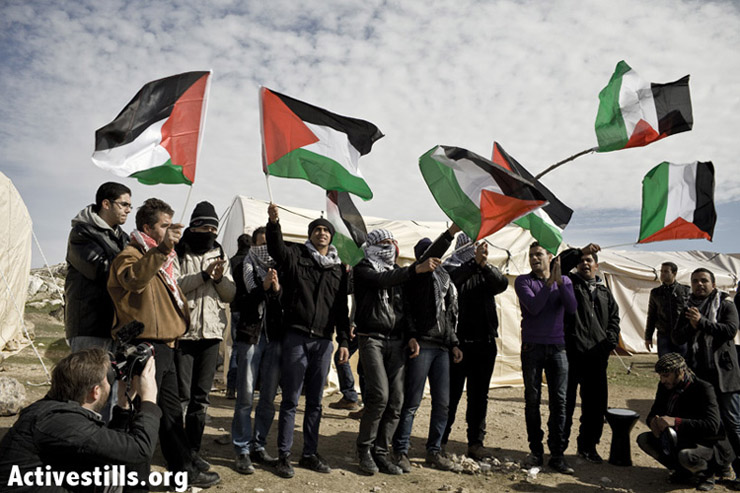 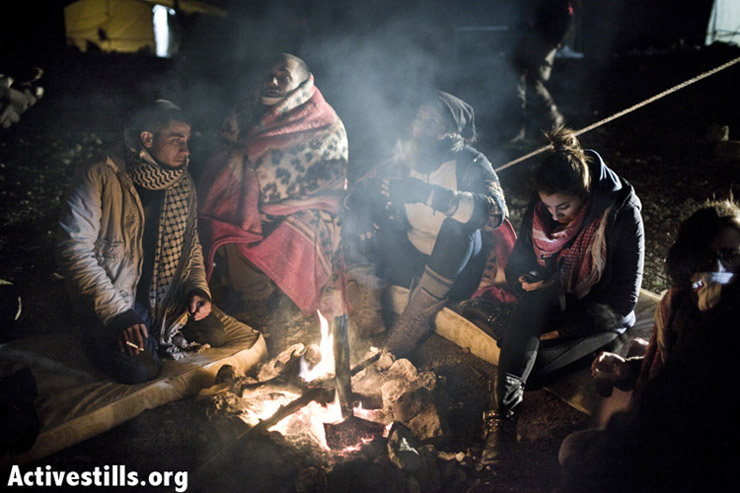 Gathering around a campfire during the first freezing night at Bab Al-Shams. 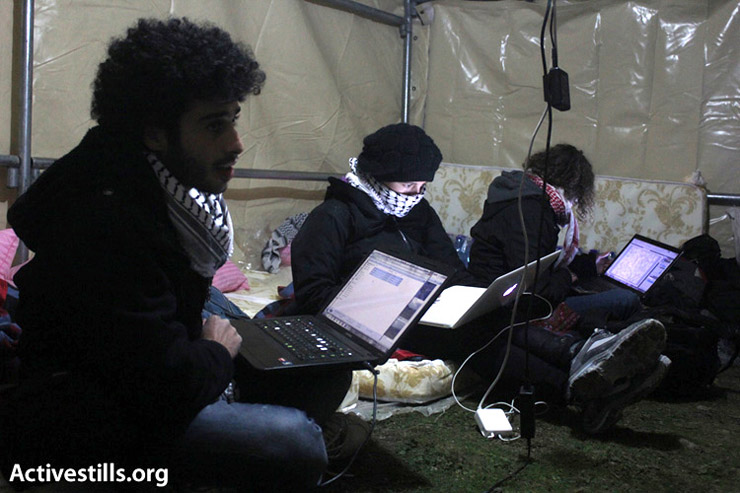 Nightly media work at Bab Al-Shams. The organizers immediately set-up an electricity supply, and the village was able to garner extensive international support through the social media. 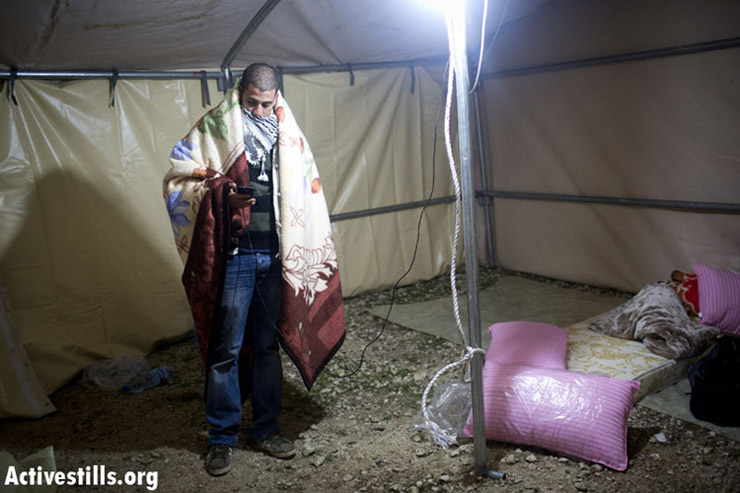 A Palestinian activist charges his phone during the first night at Bab Al-Shams. 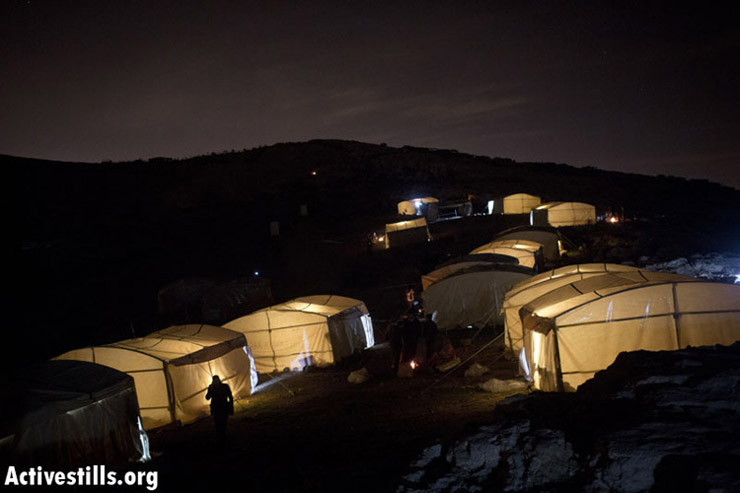 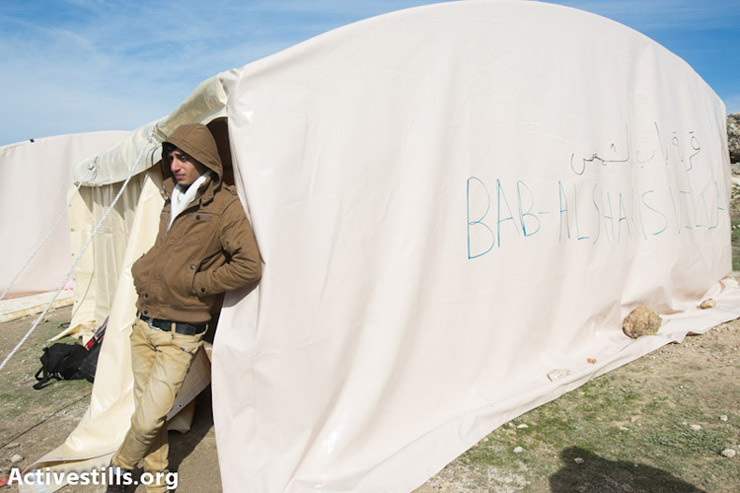 One of the tents of Bab Al-Shams. More than 200 activists took part in the village’s establishment, with most choosing to spend the night on the cold hilltop. 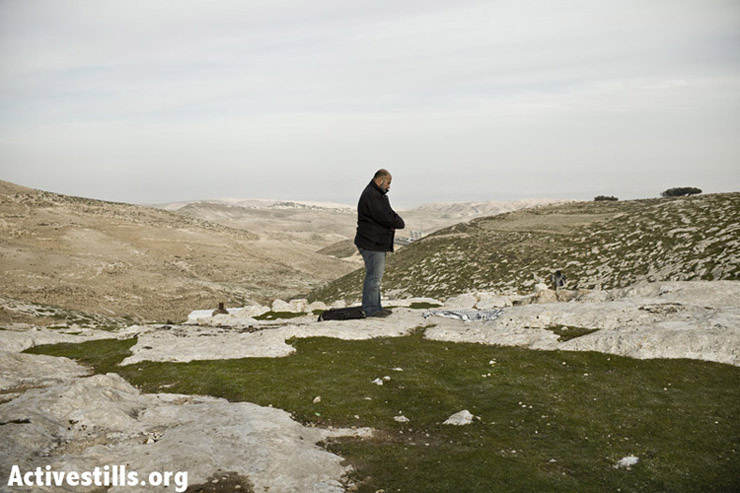 A man praying at Bab Al-Shams against the background of the hills which dot the E1 area. While not currently developed, the area is inhabited by many Bedouin communities, most of whom are already facing displacement. 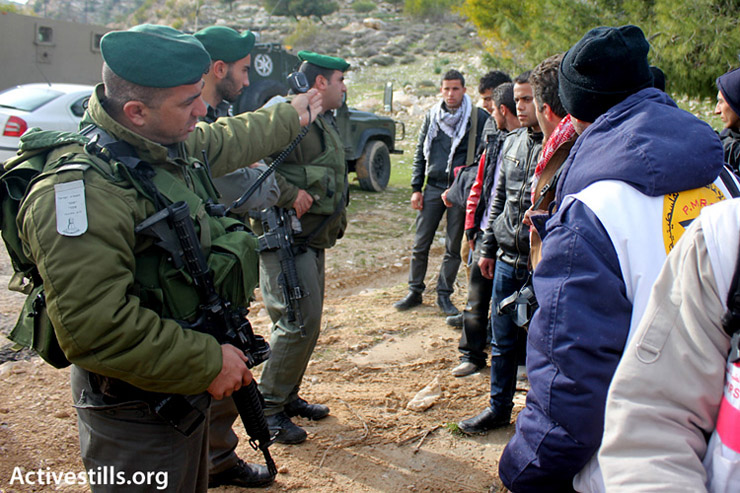 Israeli border police prevent activists from reaching Bab Al-Shams. Israeli authorities immediately sealed off the area with numerous flying checkpoints, preventing vehicles carrying supplies and in some cases members of the media from accessing the entire area surrounding the camp. 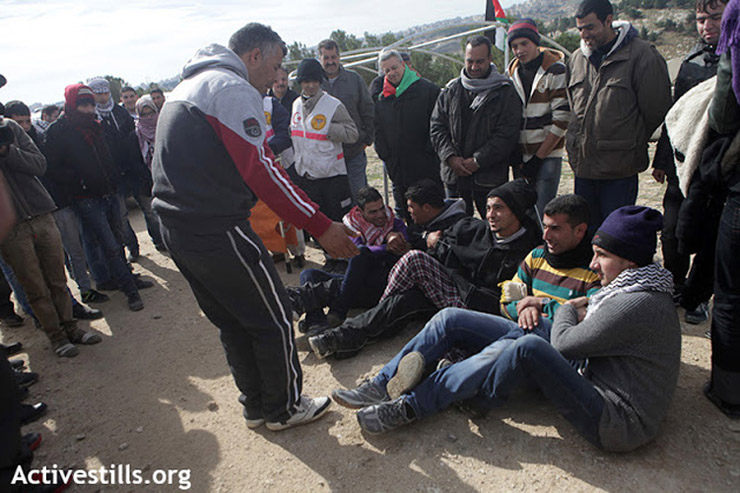 Popular struggle activists sharing nonviolent resistance techniques at Bab Al-Shams. After being issued the eviction order, the residents of Bab Al-Shams planned to remain and resist the eviction peacefully. 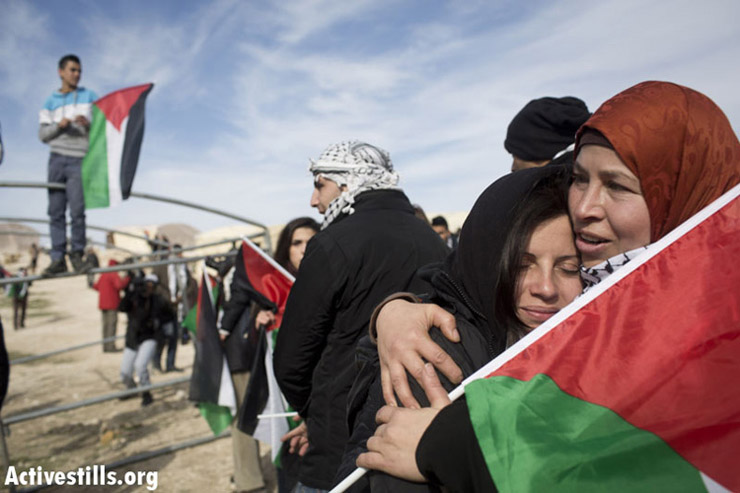 Palestinian activists meet at Bab Al-Shams as many others from different villages and groups converge to the protest camp, reaffirming the legitimacy of Palestinian presence on what is currently a territory under Israeli military occupation. 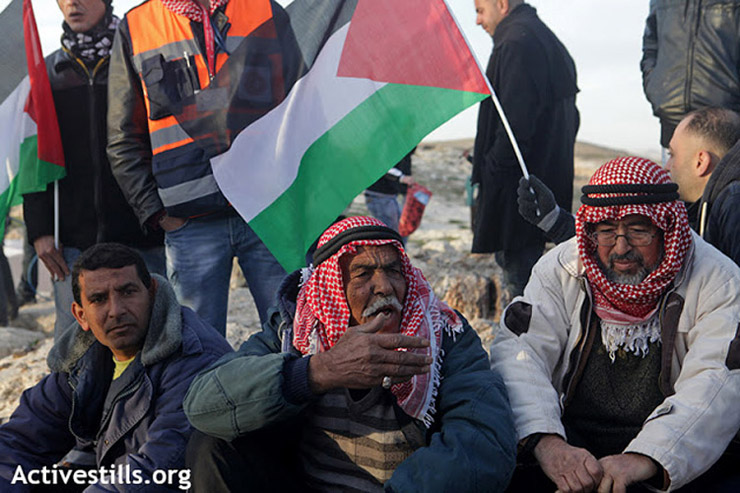 Many members of Bedouin communities took part in the establishment of Bab Al-Shams, with some coming from as far as Al-Mufaqarah, a South Hebron Hills village facing demolition whose mosque was recently demolished. 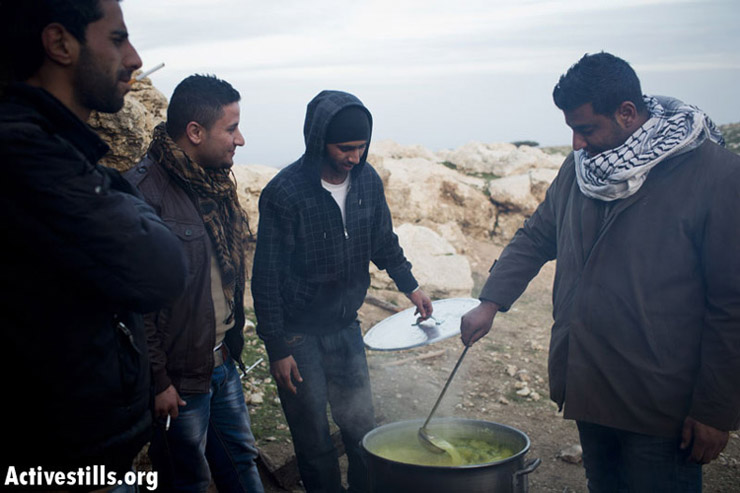 Preparing hot soup for dinner at the end of the second day after the establishment of Bab Al-Shams. With the hilltop sealed off by Israeli security forces, activists had to rely on of whatever food they had brought with them. 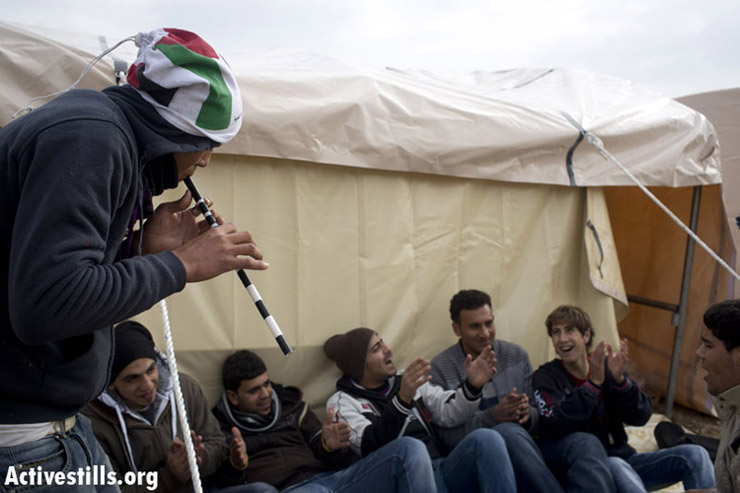 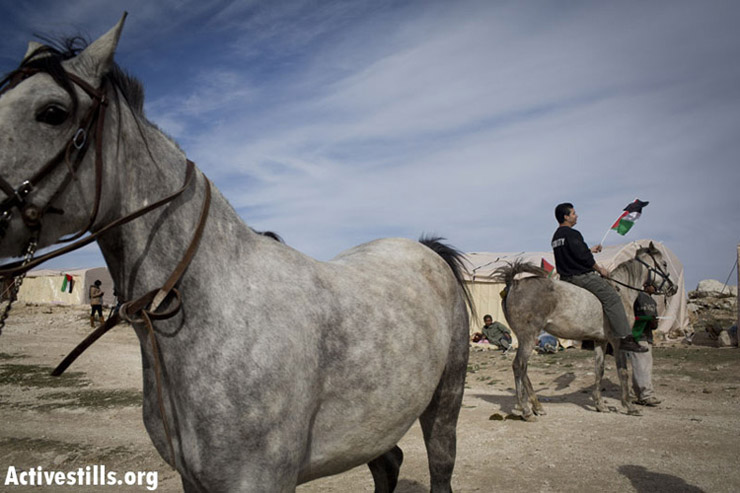 Inhabitants of nearby villages came to Bab Al-Shams with their horses, along the myriad of pathways that crisscross the lands all around East Jerusalem, many of which have been interrupted by Israel’s separation wall. 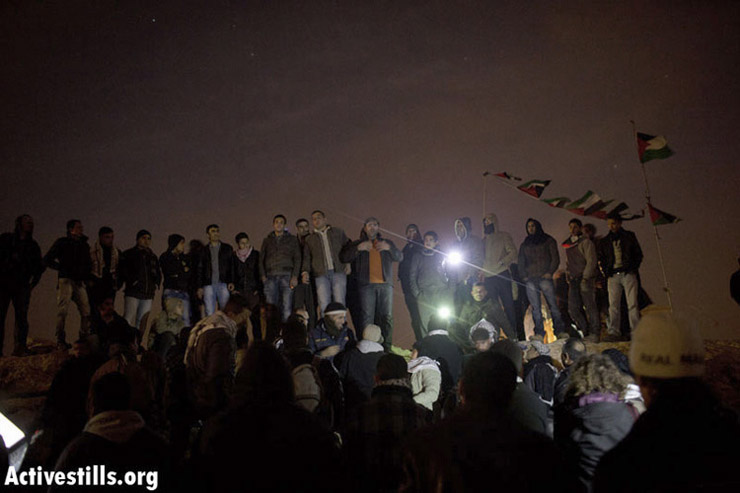 As darkness fell for the second time, a violent eviction became an increasingly likely possibility. Shortly after the sunset, the residents of Bab Al-Shams gathered on top of the hill to make plans for the night. 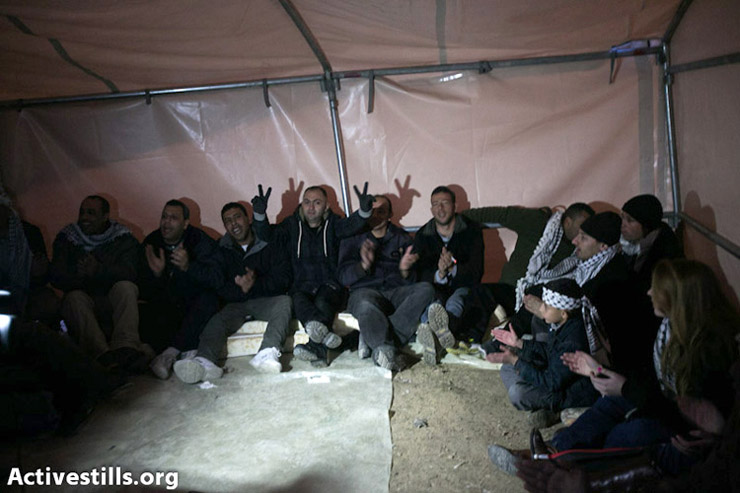 Activists chant and vow resistance in one of Bab Al-Shams’ tents, only a few hours before the village was evicted by Israeli police. 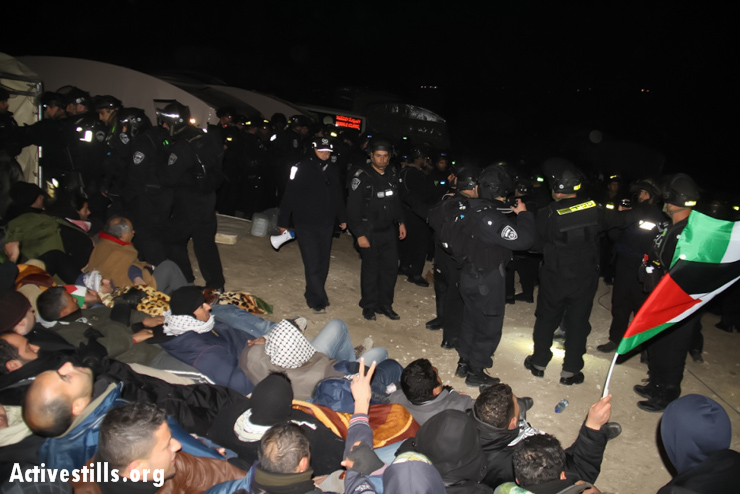 In the early morning hours of Sunday, a large Israeli police force seals off the area entirely, surrounds the village, and prepares to remove all activists. Israeli police drag an activist on the ground during the eviction of Bab Al-Shams village. Six activists were injured and hospitalized as Israeli police forcefully evacuated the entire area. 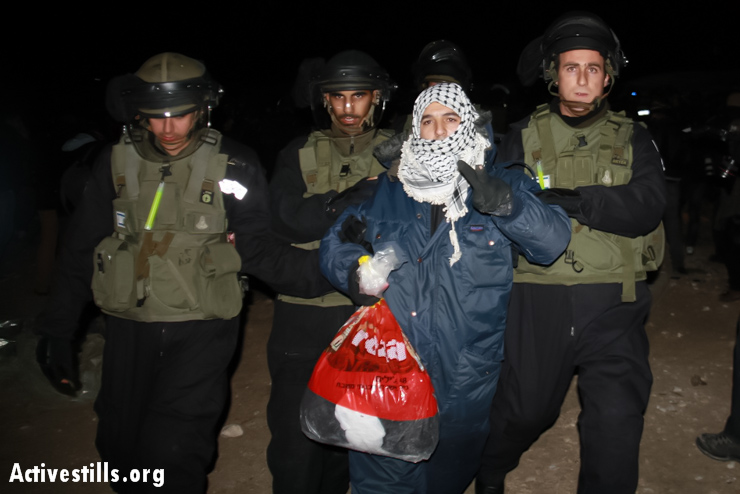 An activist is detained by Israeli forces. All inhabitants of Bab Al-Shams were loaded onto buses, and were eventually released at Qalandiya checkpoint.