Over the weekend, Palestinians went on three direct actions to establish and maintain their hold on West Bank lands. Farmers in Tuqu’ returned to lands they have been banned from farming, residents of Mufagarah built a new home after a series of demolitions, and the women of Nabi Saleh marched to the village spring for the second time in a month.

The weekend started like all other weekends in the West Bank– with popular unarmed demonstrations against the wall, the settlements and the occupation in the villages of Bil’in, Ni’lin, Nabi Saleh, Qadum and Ma’asara. Once again demonstrations were attacked by soldiers, who used tear gas, “skunk” smelly water and rubber coated bullets against the activists. Tear gas canisters started fires that caused immense damage to crops, and several demonstrators were injured. 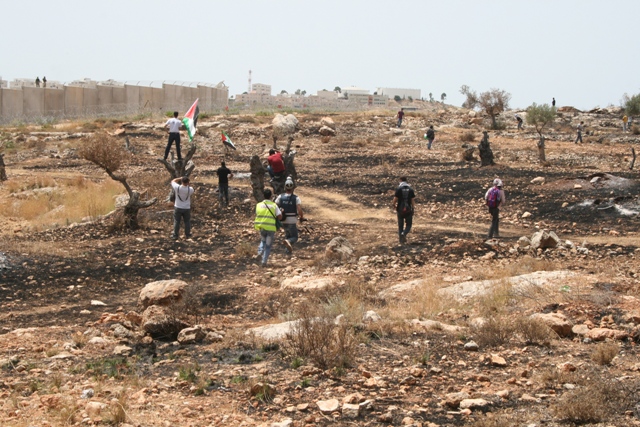 But unlike other weekends – several other Palestinian direct actions took place over the rest of the long weekend. In the village of Tuqu’, south of Bethlehem, dozens of farmers marched to agricultural lands near the illegal settlement of T’qo’a – lands they have not been allowed to cultivate for more than five years due to their vicinity to the settlement.

The villagers carried working tools, and were accompanied by other Palestinian, Israeli and international activists. Together they started working the land, uprooting bad weeds and reviving trees that had not been taken care of for years. Over the two hours they spent there, few settlers approached with dogs, weapons and cameras, but according to activists the settlers did not attack.

The soldiers and police who arrived on the scene, however, acted differently. They declared it a closed military zone, denied the farmers’ demands to get the settlers off their lands, and instead insisted that only the activists and villagers leave.

The action ended without any violence or arrests, and villagers promised to return for similar actions in the future.

Only several hours later, dozens of activists and residents of the small cave-dwelling community of Mufagarah started building a second house in the village. The small communities of the South Hebron Hills have been suffering for years from cave and tent demolitions and destruction of water wells, and the purpose of the construction was to strengthen the people’s claim on the land.

In the nearby village of A-Tuwani, similar actions by villagers and activists led Israel to recognize the village, and stop demolitions. The people of Mufagarah are hoping to achieve a similar solution, and they too were assisted this Saturday by activists from the Popular Struggle Coordination Committee and Ta’ayush.

During the construction, IDF soldiers came to the village, but did not interfere.

On the very next day, Sunday morning, about 30 women from Nabi Saleh marched to the Al-Kous spring for the second time this month.

The local women and supportive women activists have made it a point to show their presence at the village’s spring, which has been taken over by settlers. These actions of maintaining presence are defined by them as part of the popular struggle that takes form in demonstrations every Friday for more than three years now.

While they were there and their children played games near the spring, two settlers and several soldiers arrived at the scene but did not intervene. The women said they will keep on returning to the spring until it is free.