Heavy fighting continued in Gaza over the past week, with Tuesday and Wednesday proving particularly deadly days in which 120 and 129 Palestinians were killed, respectively. Three Israeli soldiers were also killed Wednesday. Protests against Israel’s Gaza operation continued to be held in Israeli cities, the West Bank and East Jerusalem. 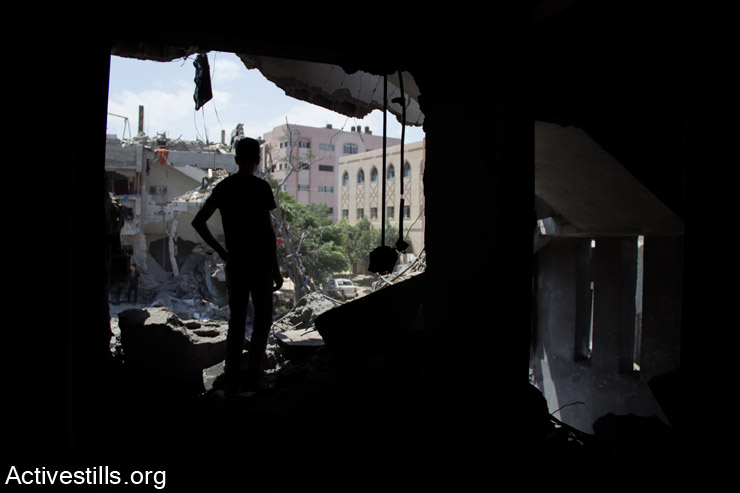 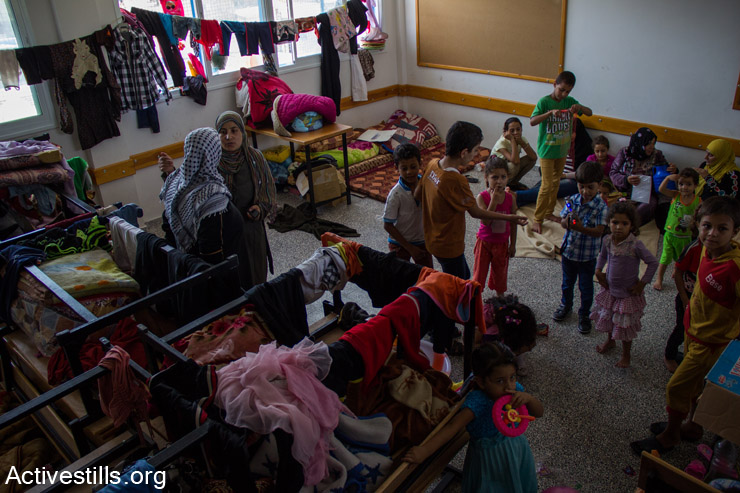 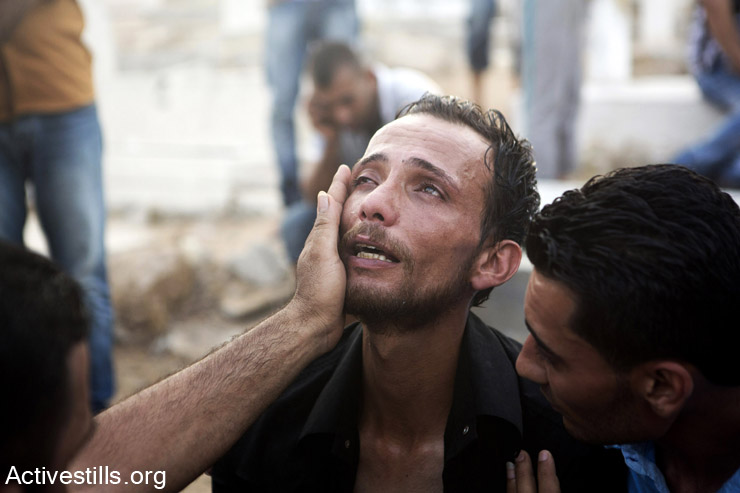 A relative of one of the children killed earlier in a playground in al-Shati refugee camp mourns at the cemetery, Gaza City, July 28, 2014. Reports indicate that 10 people, mostly children, were killed and 40 injured during the attack, which took place on the first day of Eid. (Anne Paq/Activestills.org) 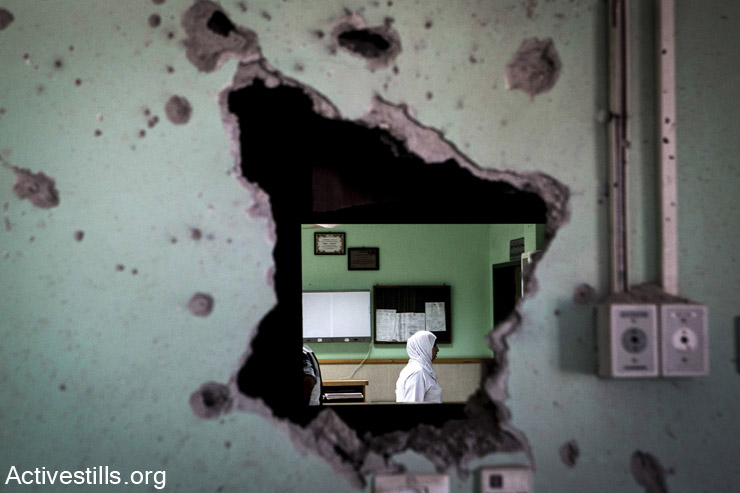 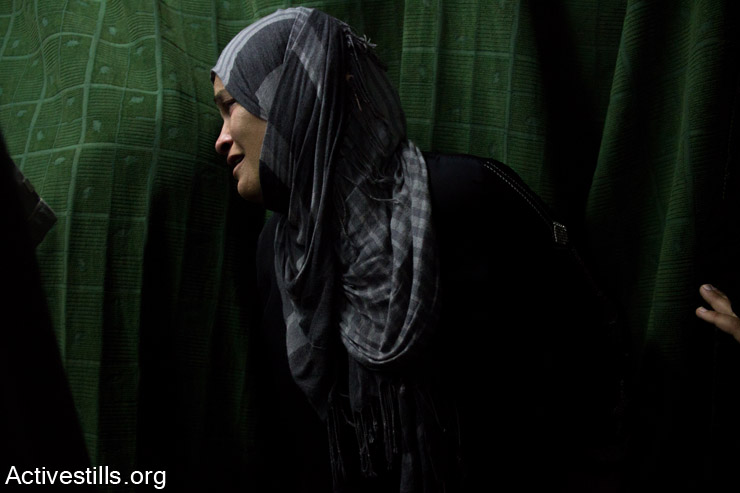 Relatives of Palestinians killed during an Israeli attack on Beit Hanoun elementary school mourn in Kamal Edwan Hospital, Jabalyia, Gaza Strip, July 24. The school was being used as a shelter by 800 people. The attack killed at least 17 and injured more than 200 of the displaced civilians. (Basel Yazouri/Activestills.org) 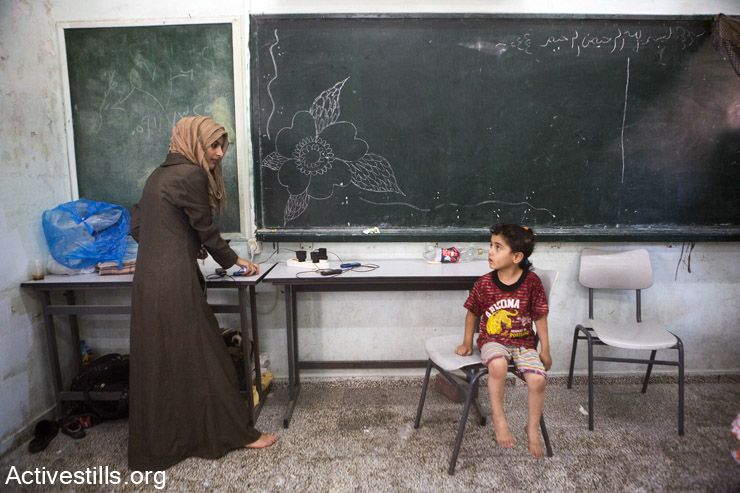 Palestinians who fled from Israeli attacks take refuge in Falluja government school, Jabaliya refugee camp, July 29, 2014. Many Palestinians fled their homes last night after having received orders to evacuate. More than 220,000 Palestinians found shelter in UNRWA schools but the total number of displaced is much higher. (Anne Paq/Activestills.org) 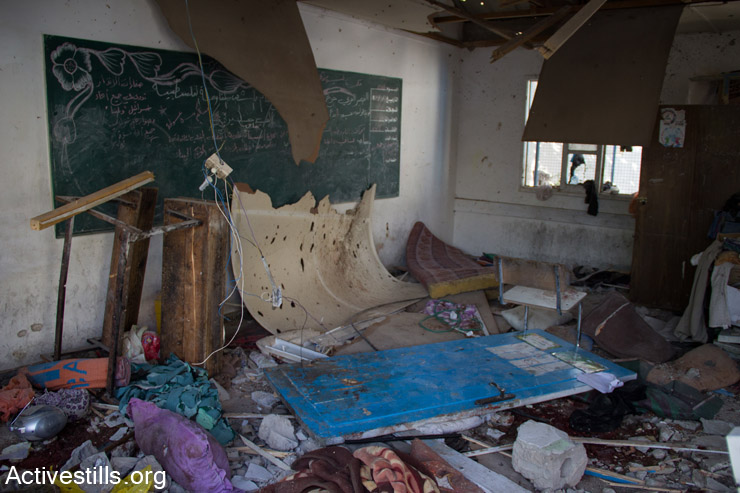 A classroom lies damaged following the overnight Israeli shelling of an UNRWA school, where some 3,300 Palestinians were seeking shelter, Jabalia, Gaza Strip, July 30, 2014. At least 20 people were killed in the attack ,which injured more than 100. (Basel Yazouri/Activestills.org) 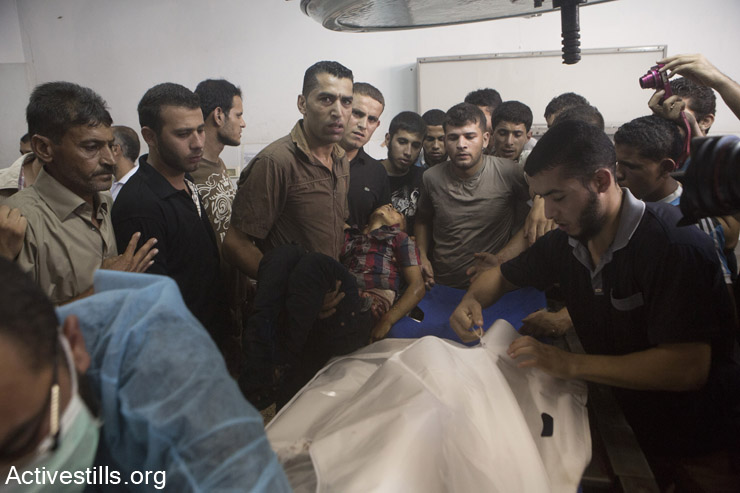 Palestinians gather around a child killed in a playground in al-Shati refugee camp at the morgue of Al-Shifa hospital, Gaza city, July 28, 2014. Reports indicate that 10 people, mostly children, were killed and 40 injured during the attack, which took place on the first day of Eid. (Anne Paq/Activestills.org) 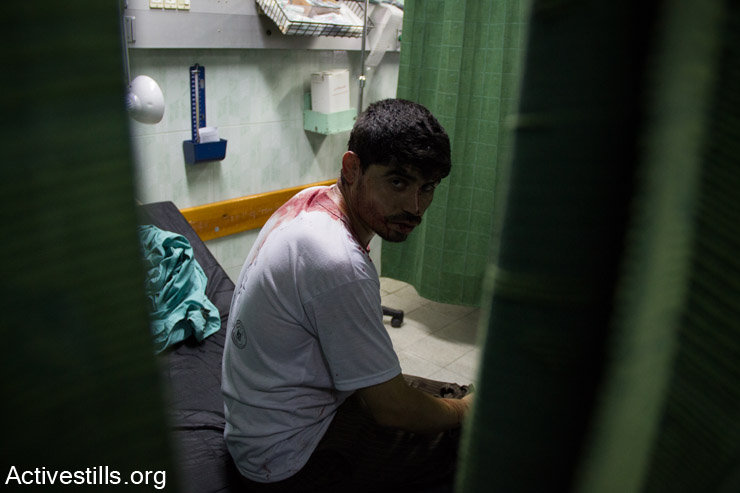 An injured Palestinian is seen in the emergency room of Kamal Edwan Hospital after an Israeli attack on Beit Hanoun elementary school, Jabalyia, Gaza Strip, July 24. The school was being used as a shelter by 800 people. The attack killed at least 17 and injured more than 200 of the displaced civilians. (Basel Yazouri/Activestills.org) 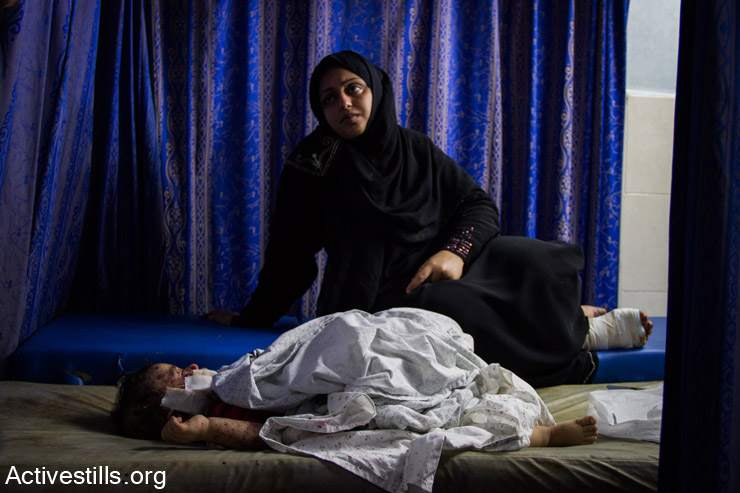 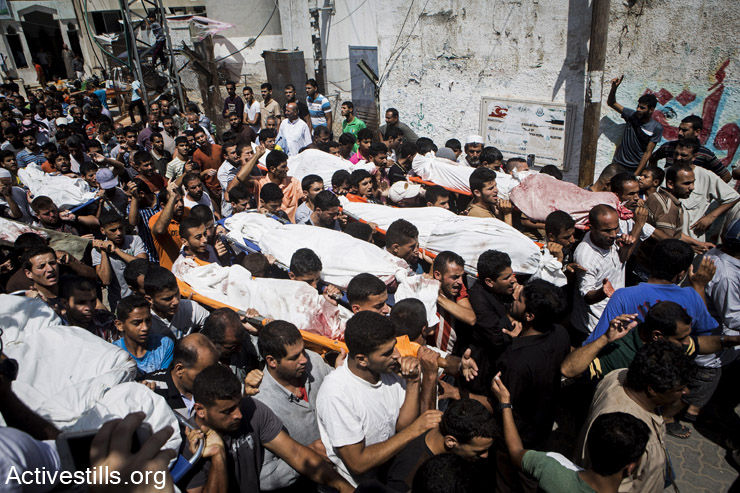 A funeral in Bani Suhaila for the 21 members of the Al-Najjar family, who were killed just before the ceasefire, east of Khan Younis, Gaza Strip, July 21, 2014. The Al-Najjar family fled their homes in Khuza’a to take refuge further west. Israeli attacks have killed more than 1,400 Palestinians in the current offensive, most of them civilians. Khuza’a has been under heavy attack and many people fled the village as the Israeli army physically occupied it. (Anne Paq/Activestills.org) 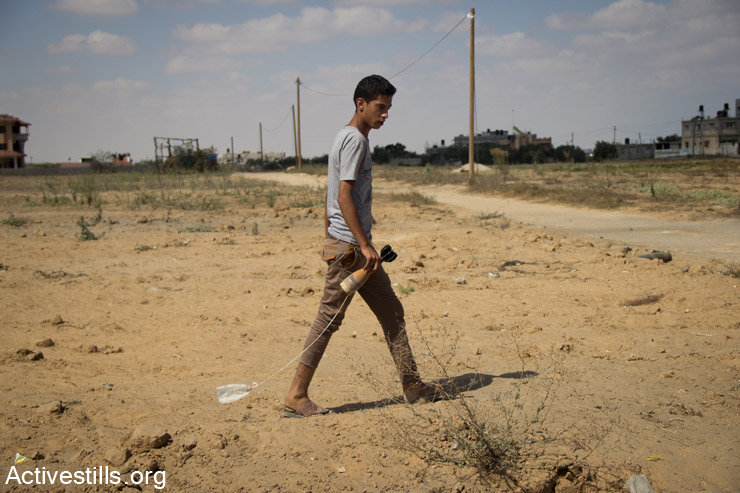 A Palestinian shows pieces of Israeli weaponry in Abasan al-Kabira village at the entrance to another village Khuza’a, East of Khan Yunis, July 26, 2014. During the ceasefire on 26 July, many Palestinians went back to Abasan al-Kabira to inspect the damage together with medics, who attempted to rescue the injured or collect bodies. Residents of adjacent Khuza’a could not enter, as Israeli soldiers fired warning shots. (Basel Yazouri/Activestills.org) 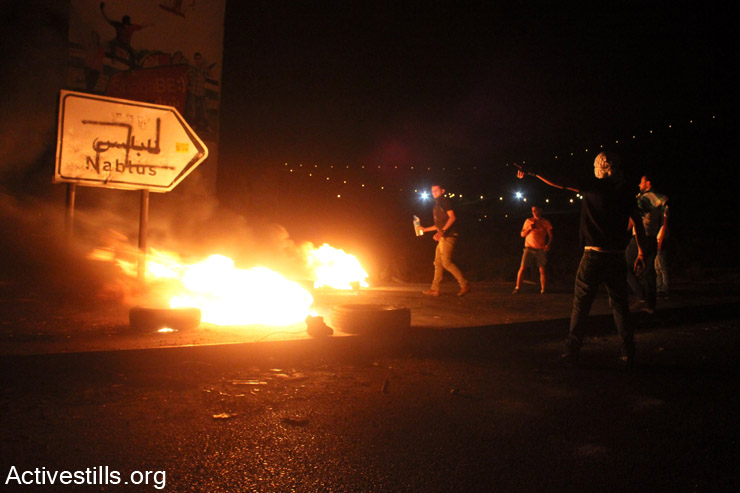 Clashes erupted between hundreds of Palestinians and the Israeli army during a demonstration against the attack on Gaza, Huwwara military checkpoint, Nablus, West Bank, early morning July 25, 2014. A 22-year-old Palestinian was shot to death by the Israeli army with live ammunition and at least 3 were injured the same day at Huwwara checkpoint. (Ahmad Al-Bazz/Activestills.org) 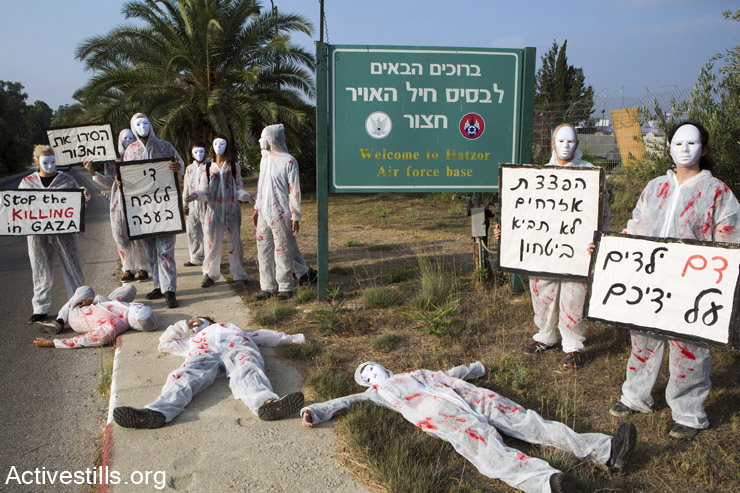 Israeli women activists stage a protest against the attack on Gaza at Hatzor Air Force base, Israel, July 29, 2014. The activists wore white overalls stained with red paint and called on the Israeli government to stop the air strikes and bring an end to the siege on Gaza. They also expressed concern regarding the suffering of civilians in southern Israel. Signs in Hebrew read (from R to L): “Blood of children on your hands,” “Bombing civilians will not bring security,” “Stop the massacre in Gaza” and “Remove the siege.” A few activists were detained by security forces. (Activestills.org) 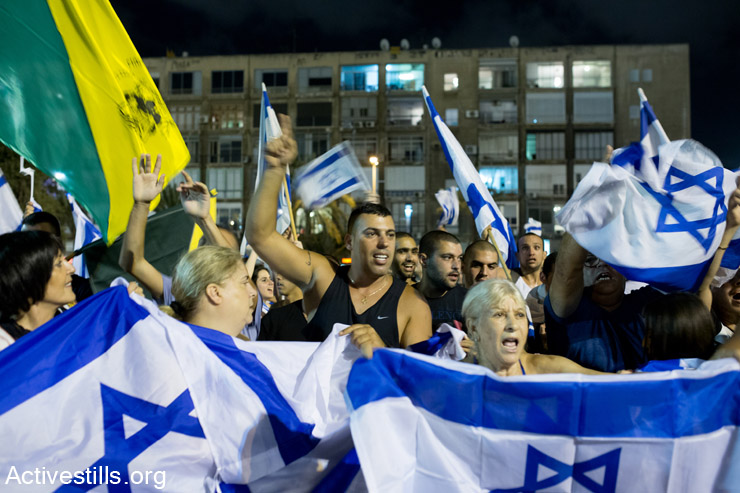 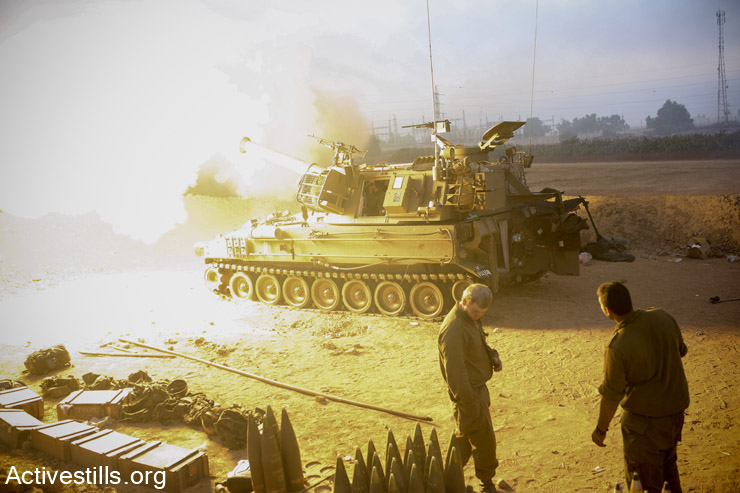 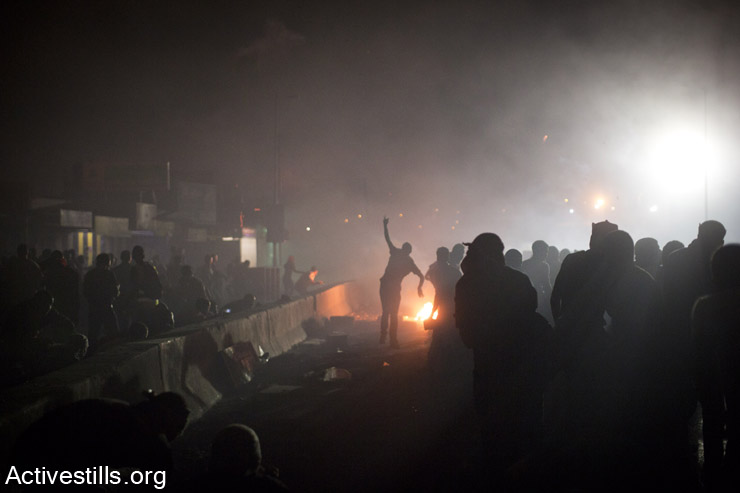 Palestinian youth throw stones during clashes following a protest against the Israeli attack on Gaza at the Qalandiya checkpoint near Ramallah, July 24, 2014. (Oren Ziv/Activestills.org) 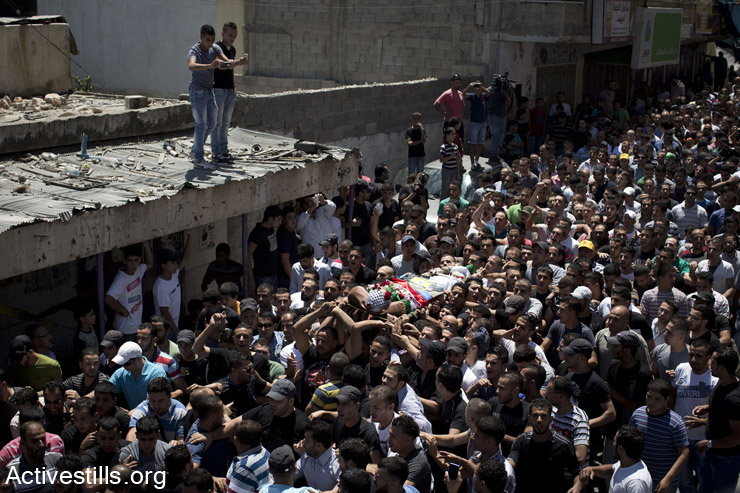 Mourners carry the body of Mohammed al-Araj, 17, in his funeral ceremony at the Qalandiya refugee camp near the West Bank city of Ramallah, on July 25, 2014. Al-Araj was shot and killed the previous night during clashes with the Israeli army. Israeli security forces shot him dead and wounded over 200 other protesters during the massive protest in the West Bank against the Israeli attack on the Gaza strip. (Oren Ziv/Activestills.org) 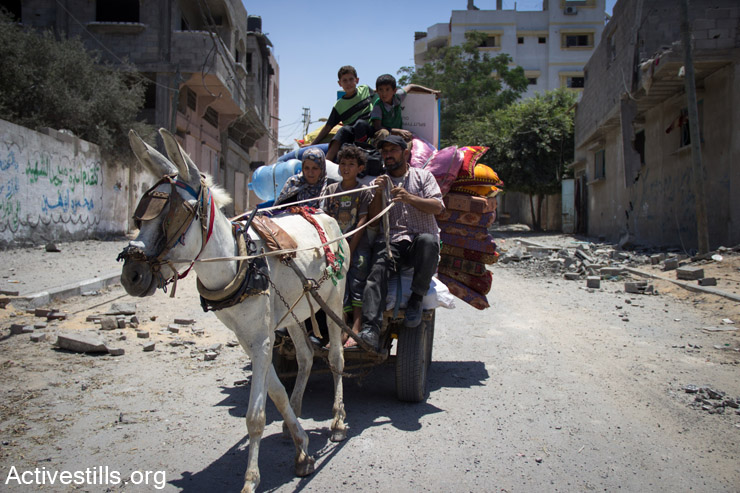 A destroyed quarter in Shejaiya neighborhood in the east of Gaza City, during a ceasefire, July 27, 2014. During the ceasefire on 26 July, many Palestinians went back to Shejaiya to inspect the damage together with medics, who attempted to rescue the injured or collect bodies. Dozens of bodies were collected but many remain as Palestinians do not have all the necessary equipment to dig them out of the rubble. Israeli attacks turned the neighborhood into a scene of utter devastation, with entire buildings flattened and thousands forced to flee. (Basel Yazouri/Activestills.org) 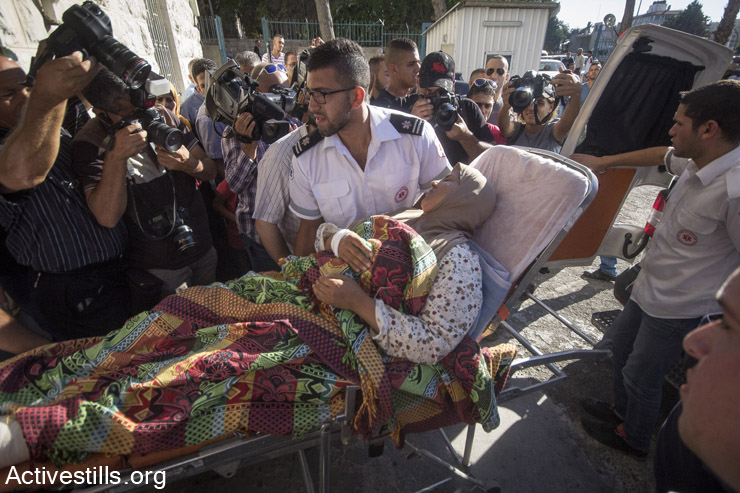 A Palestinian woman from the Gaza Strip arrives to the Saint Joseph hospital in East Jerusalem, on July 29, 2014 after she was injured in an Israeli military attack on Gaza. Israel exceptionally authorized around 50 Palestinians to cross into Israel to receive a specialized brain surgery following negotiations between the Red Cross and the Palestinian Authority. (Faiz Abu Rmeleh/Activestills.org) 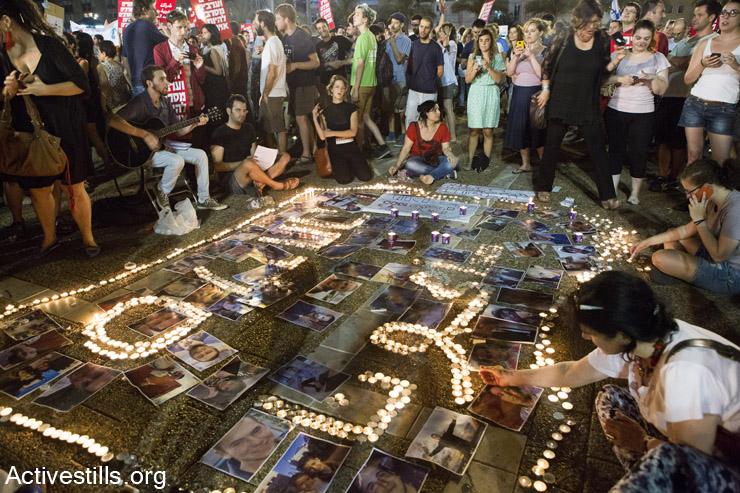 Israeli activists light candles with the word “sorry” in Arabic and Hebrew, during a protest against the attack on Gaza, Rabin Square, Tel Aviv, July 26, 2014. (Keren Manor/Activestills.org)

Related:
Will there be peace if Palestinians lay down their arms?
Gaza catch-22: When a humanitarian ceasefire becomes a death trap
Photos: Gazans use ‘ceasefire’ to pick up the pieces