In the Jordan Valley, it is virtually impossible for Palestinian families to get the permits to build a home: their buildings are demolished and they are forced to live in tents and tin structures with no electricity or water. Illegal Jewish settlements, however, are rarely demolished and are connected to the electricity and water grids. Activestills joins one family that has been living in a tent without basic services for 10 years as they celebrate the first night of the Muslim holiday of Eid al-Adha. 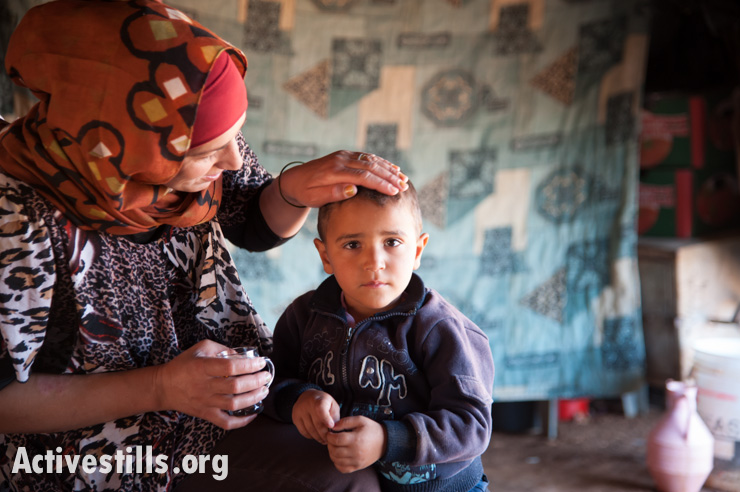 On the Muslim holiday of Eid al-Adha, Samiha Shalalda and her son Yusuf welcome guests to their tent on the edge of the Jordan Valley desert near the West Bank town of Al Maniya, October 15, 2013. The Shalalda family has lived in a tent for more than 10 years after their home near the West Bank town of Sa’ir was demolished by Israeli authorities. (photo: Ryan Rodrick Beiler/Activestills.org)

Samiha and Suleiman Shalalda live with their five children in a tent on the edge of the Jordan Valley desert, with a view of the Dead Sea in the distance. On the first day of Eid al-Adha, the “Feast of the Sacrifice,” family visitors filled their tent with food, gifts and laughter. According to Muslim tradition, the holiday celebrates Ibrahim’s willingness to sacrifice his son Ismail, when God instead provided a sacrificial lamb. As the setting sun illuminates the horizon Jordanian mountains with pastel hues, roasted meat from sheep slaughtered to honor God’s provision fills folds of flatbread baked over open fires.

The beauty of the location and occasion, however, cannot disguise the ugly reason that this family must live on the edge of the desert without access to running water or electricity. Like many Palestinians living in Area C, the 61 percent of the West Bank that is under total Israeli control (both civil and security), they found it impossible to get a building permit when they were newly married. The house they did build, near the town of Sa’ir, was quickly demolished by Israeli authorities. Since then, they have lived in a tent near Al Maniya, now adjacent to the site of a newly constructed USAID-funded landfill. For more than 10 years, their water has come from a tank that they must pay to refill from delivery trucks. Their only electricity comes from a small gas-powered generator that they use sparingly.

For those who would blame Samiha and Suleiman for these circumstances because their house and even current shelter are “illegal,” and governments anywhere would take similar action, it’s important to note that the Israeli military occupation differs greatly from the civilian authorities in most other countries. According to a report issued by the Israeli Committee Against House Demolitions (ICAHD) (emphasis added): “Under Israeli zoning policy, Palestinians can build in just 13 percent of East Jerusalem and in just 1 percent of Area C…. More than 94 percent of all Palestinian permit applications have been rejected in recent years.”

Samiha and Suleiman have begun building a new permanent house nearby, but as it is also in Area C, they have received stop-work orders from Israeli authorities. Nonetheless, as resources become available, they plan to continue building, citing the fact that their neighbors have received similar orders, with no action taken. The family hopes that once they inhabit the house they will be able to successfully forestall demolition through the courts. It’s a plan with obvious risks, but when you’re living on the margins of occupation, with limited resources, what choice do you have? 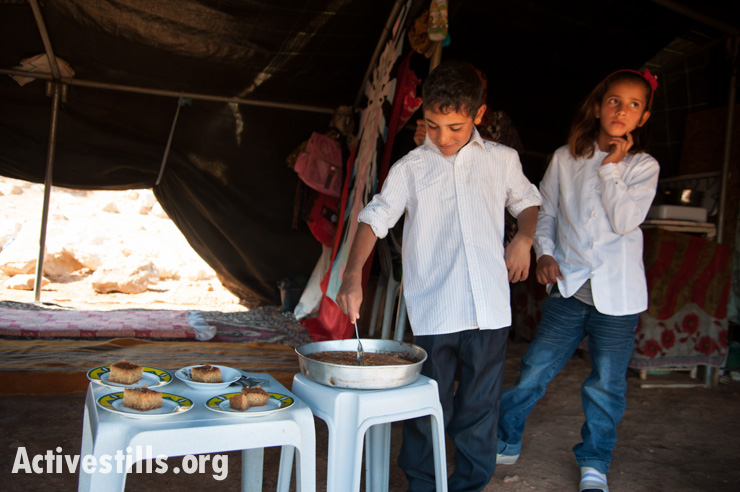 Ibrahim and Abir Shalalda serve honey-sweetened cakes to family and friends on Eid al-Adha in their tent on the edge of the Jordan Valley desert near the West Bank town of Al Maniya. (photo: Ryan Rodrick Beiler/Activestills.org) 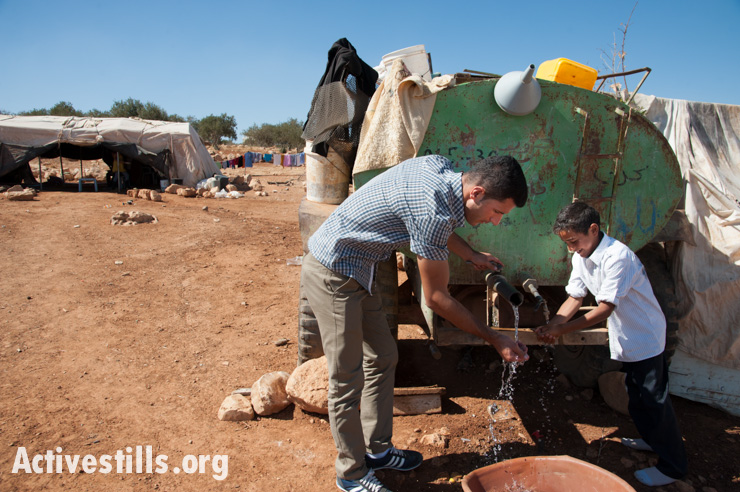 Sabiha’s brother Mahmoud and Ibrahim wash their hands from the family’s water tank, their only water source, which they must pay to have refilled by truck from a nearby village. The nearby Israeli settlement outpost Ibei Hanahal is connected to the Israeli water system, even though it was built illegally under both Israeli and international law. (photo: Ryan Rodrick Beiler/Activestills.org) 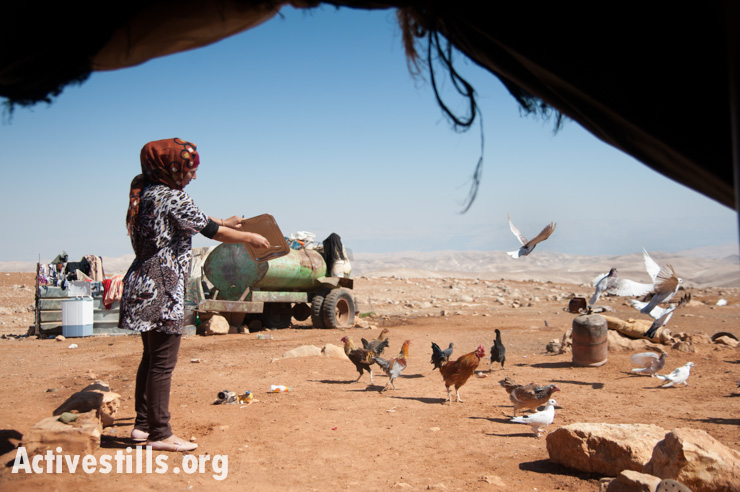 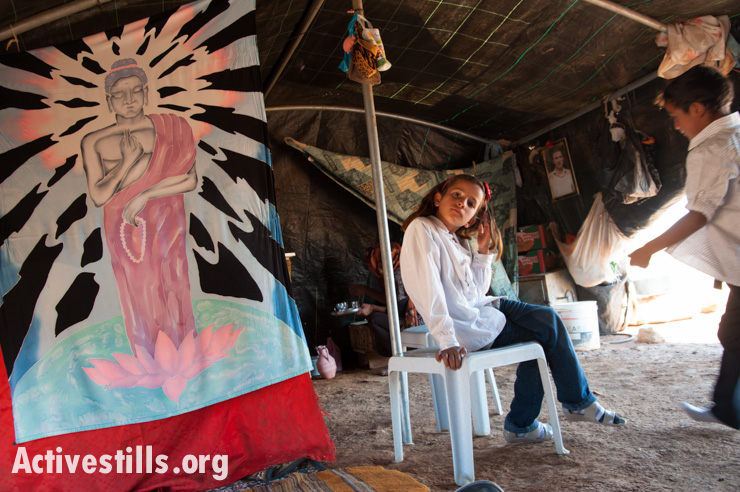 An image of the Buddha hangs in the Shalalda family’s tent. Though the new house they are building nearby will also be at risk of demolition, they are determined to continue given their limited options for adequate housing. (photo: Ryan Rodrick Beiler/Activestills.org) 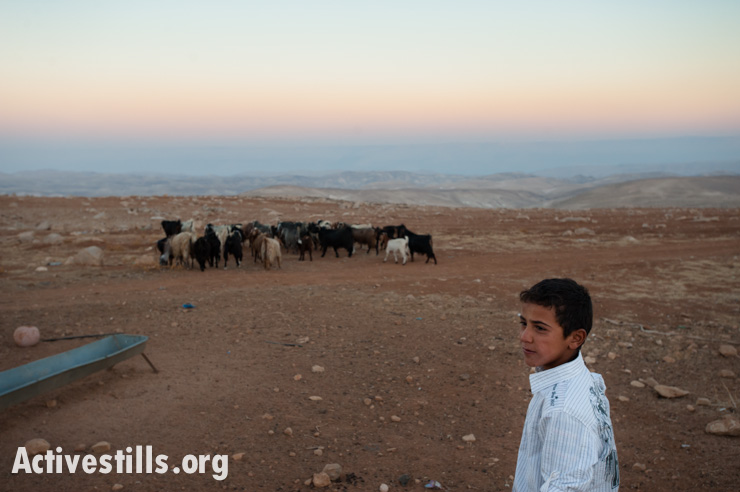 Ibrahim Shalalda watches the family’s flocks at dusk on the first day of the Muslim holiday Eid al-Adha, which celebrates the prophet Ibrahim’s willingness to sacrifice his son Ishmail, but instead God provided a lamb. (photo: Ryan Rodrick Beiler/Activestills.org) 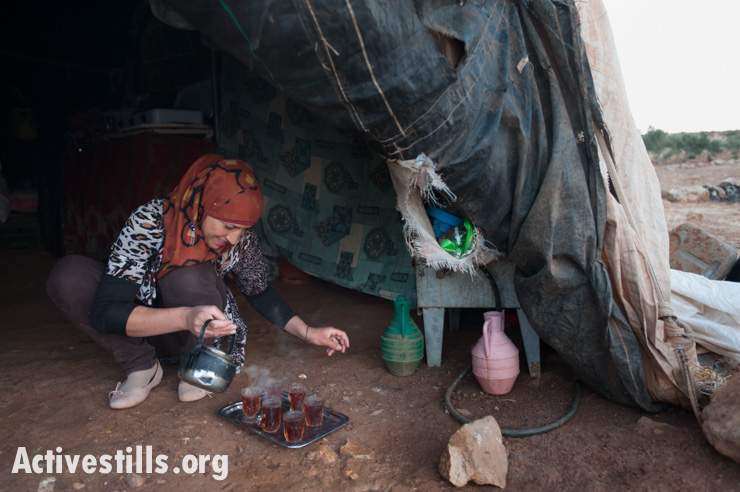 Samiha Shalalda prepares tea for guests on the first evening of Eid al-Adha. Traditionally, family members visit each other during the Eid, often bringing gifts for the women and children in the family. (photo: Ryan Rodrick Beiler/Activestills.org) 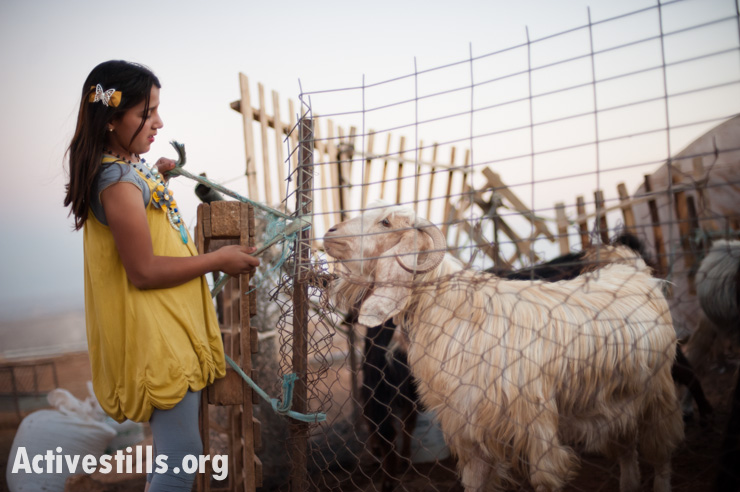 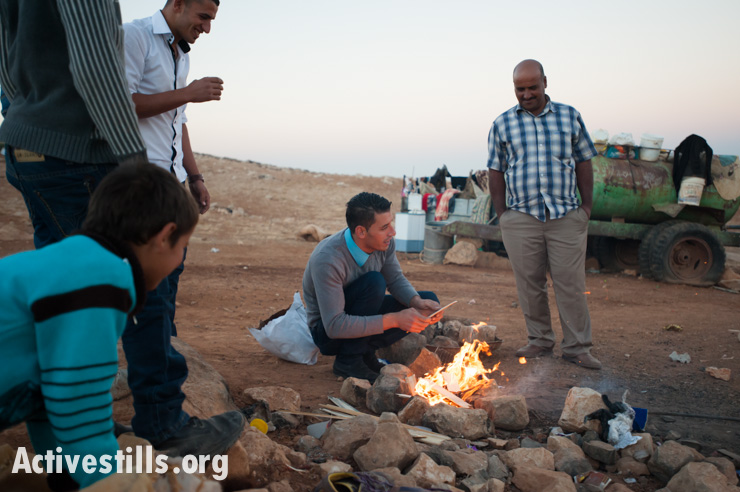 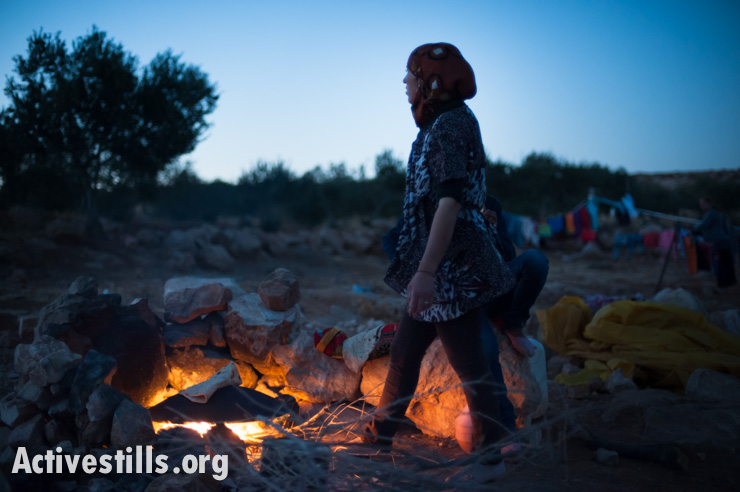 In preparation for the Eid meal, Samiha Shalalda bakes shraq, a very thin flatbread, on a steel dome laid on top of an open fire. (photo: Ryan Rodrick Beiler/Activestills.org) 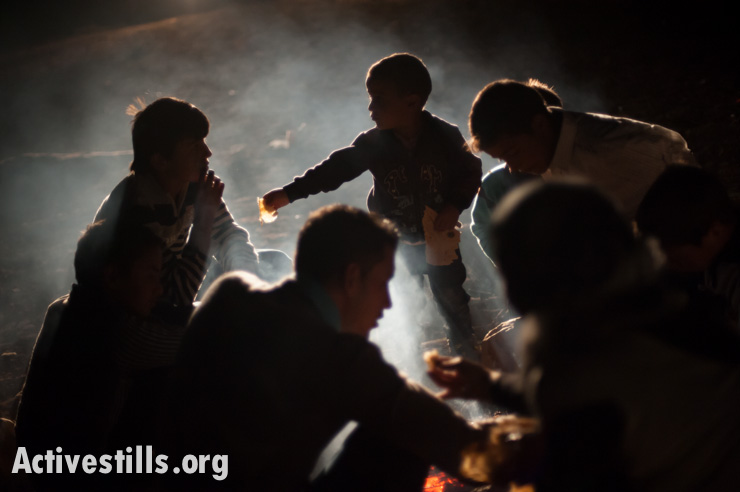 The Shalalda family children and visiting cousins share roasted lamb and vegetables wrapped in freshly baked flatbread around the fire on the evening of Eid al-Adha. (photo: Ryan Rodrick Beiler/Activestills.org) 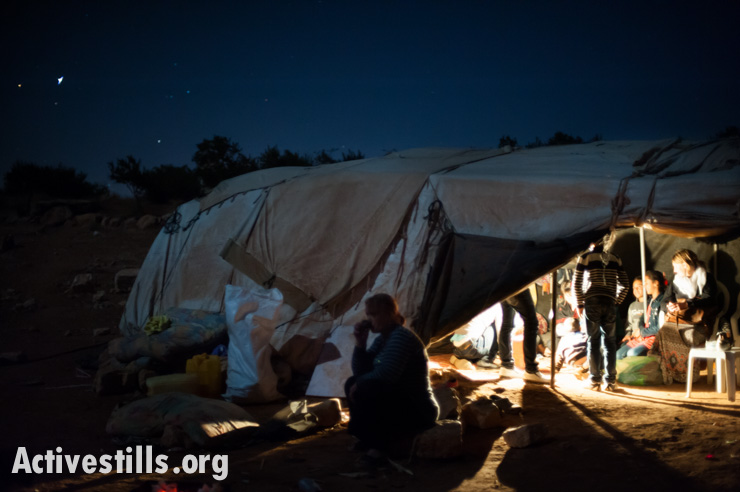 As stars begin to shine on the first night of Eid al-Adha, the Shalalda family and their guests gather around the light of a gas lantern for tea and coffee inside their tent. The family’s only electricity comes from a small generator, unlike the nearby Israeli settlement outpost Ibei Hanahal, which though it is illegal under both Israeli and international law, enjoys full access to the Israeli power grid. (photo: Ryan Rodrick Beiler/Activestills.org)
Get Our Weekly Newsletter