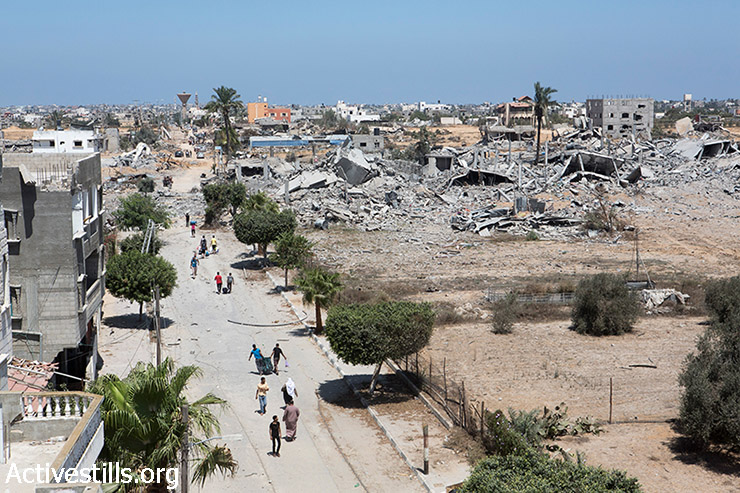 The most commonly cited statistic from Gaza is the death toll, now rising past 1,814, according to UN figures. Such numbers can be numbing, as absorbing the reality of so many faces and names is impossible. Yet another staggering figure that is difficult to comprehend is the number of people displaced from their homes, which the UN estimates at 520,000.

Gaza’s half-million displaced residents are one of the most obvious refutations of the the accusation that Hamas uses “human shields.” The Guardian has reported “large numbers of people fleeing different neighborhoods… and no evidence that Hamas had compelled them to stay.” Similarly, The Independent writes that, “Some Gazans have admitted that they were afraid of criticizing Hamas, but none have said they had been forced by the organization to stay in places of danger and become unwilling human shields.”

For its part, the Israeli military has attempted to absolve itself from accusations of war crimes through elaborate measures to warn people living in areas under imminent threat of attack, often in border areas, by dropping leaflets, sending automated voice messages, texts, or in the case of more targeted strikes, even personal phone calls or the so-called “knock-on-roof” unarmed warning missile.

Michael Sfard, writing in Haaretz points out that this military doctrine:

….does not take into consideration the question of whether the prior warning given the population is effective – i.e., whether the population can in fact leave, whether solutions have been found for the elderly, the ill and the children. Nor is it accompanied by the creation of a safe corridor through which people can flee to someplace that won’t be fired on, and where civilians have what they need to survive. The terrifying result of this combat doctrine, in both Cast Lead and Protective Edge, was piles of bodies of women, children and men who weren’t involved in the fighting.

Amnesty International puts it more concisely: “Deliberately attacking a civilian home is a war crime, and the overwhelming scale of destruction of civilian homes, in some cases with entire families inside them, points to a distressing pattern of repeated violations of the laws of war.”

But while the shocking criminality of these practices has contributed to 1,176 civilian deaths in Gaza to date, displaced survivors are now faced with the challenge of enduring further suffering after their homes and much of their worldly possessions have been destroyed. During brief lulls in the fighting, some have ventured back to their homes to retrieve belongings or search for bodies. Many continue to exist in UNRWA schools, which themselves have come under attack on numerous occasions, shattering what fragile sense of security those already displaced may have sought in such shelters.

All of which points to the most common-sense human response to Israel’s “warnings” – echoed by satirical news anchor Jon Stewart: 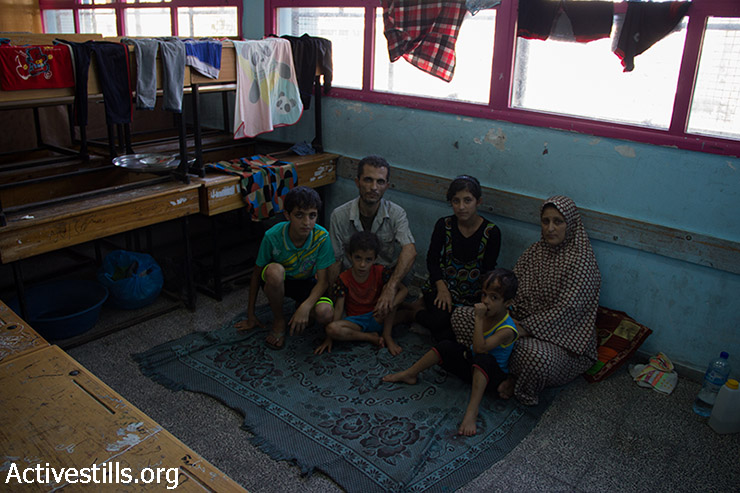 Nahed Daoud, age 41, has been staying in an UNRWA school for four days since his family evacuated after Israeli warnings that their neighbors would be bombed, July 16, 2014. Since fleeing, according to Nahed, the Israeli air force bombed their neighbor’s house, badly damaging his house. (Basel Yazouri/Activestills.org) Palestinians stand in front of the entrance of Remal Elementary UNRWA School, which is used as a temporary shelter by Palestinians living in the Norther part of the Gaza Strip, Gaza City on July 13, 2014. (Anne Paq/Activestills.org) 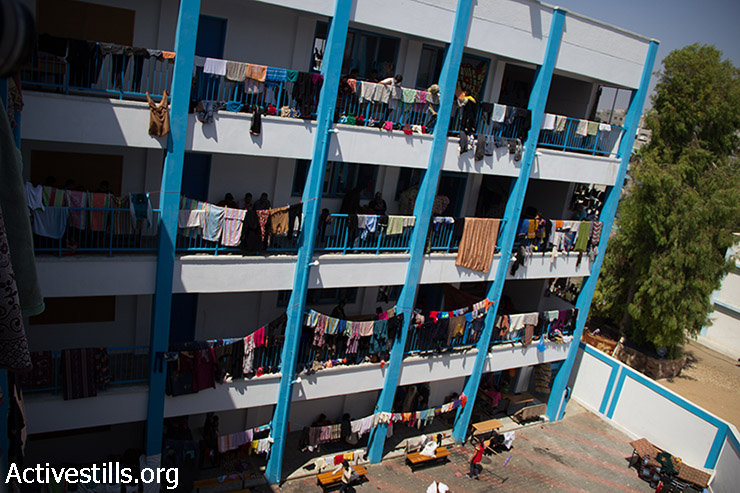 Displaced Palestinians in an UNRWA school, on the first day of Eid, Gaza City, July 28, 2014. 83 UNRWA schools turned into shelters, as were many hospitals, all over the Strip. (Basel Yazouri/Activestills.org) 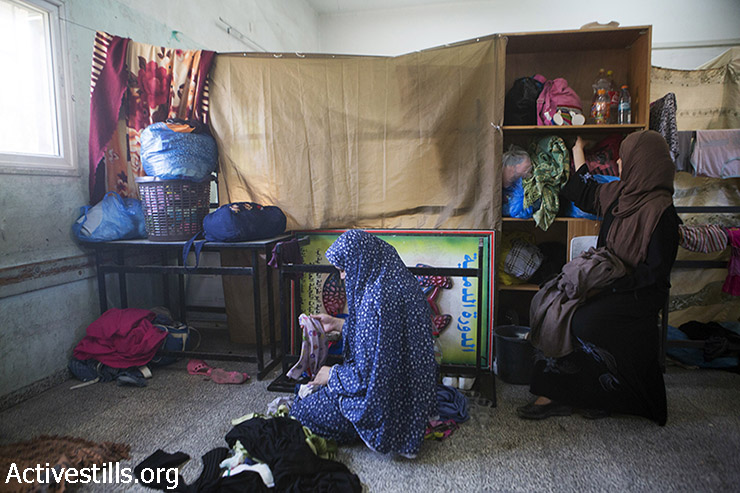 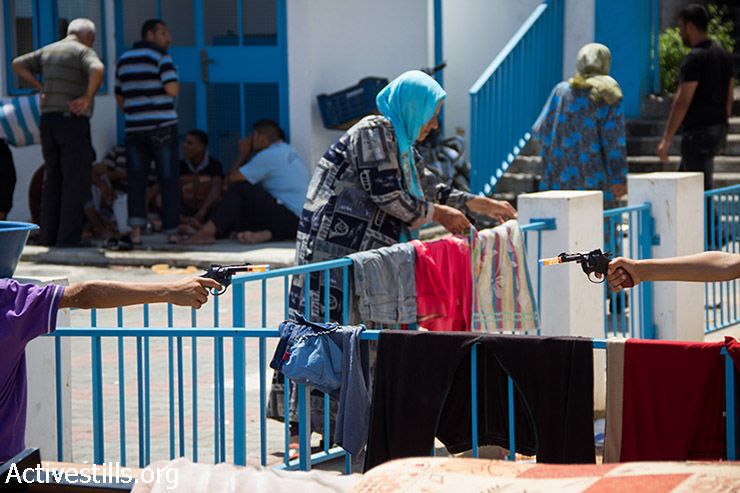 Displaced Palestinians on the first day of Eid, Gaza, July 28, 2014. 83 UNRWA schools turned into shelters, as did many hospitals, all over the Strip. (Basel Yazouri/Activestills.org) 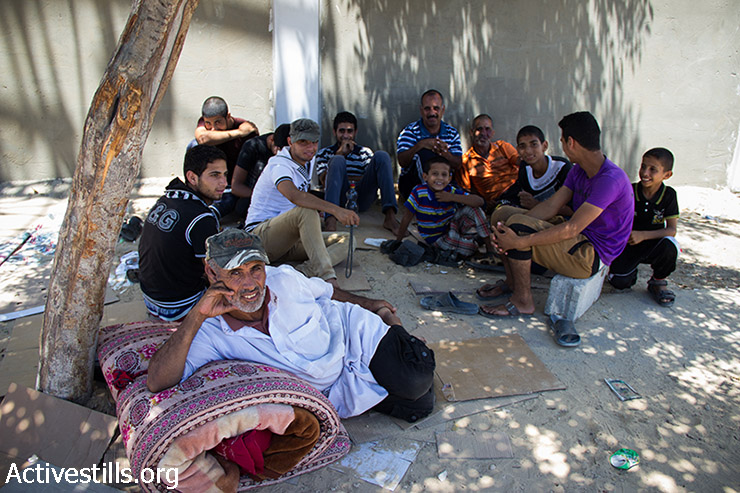 A Palestinian family from Abasan sits under a tree next to Khan Younis hospital. The family stayed under the tree for 10 days after they had to flee  their home due to the Israeli attack. Gaza Strip, July 24, 2014. (Basel Yazouri/Activestills.org) 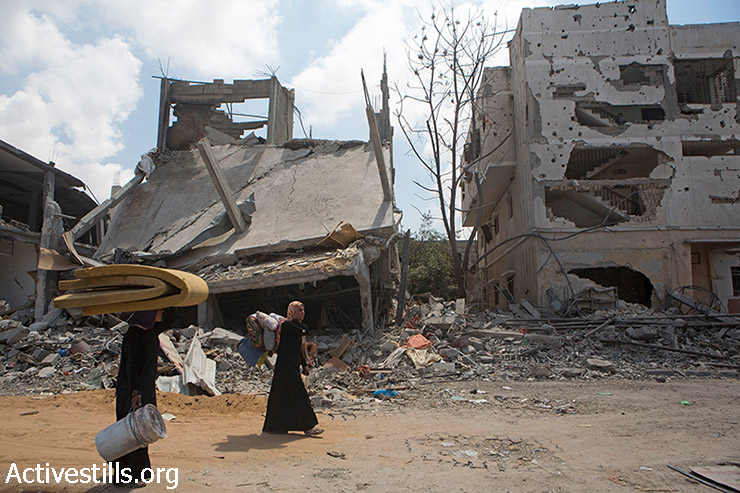 Palestinian women retrieve what belongings they can carry from their homes in Beit Hanoun, North Gaza, August 4, 2014. They had returned to their homes to quickly salvage what they could during a short ceasefire. Most Beit Hanoun residents fled the heavily bombed areas and have been staying in UNRWA schools or with relatives. (Anne Paq/Activestills.org) 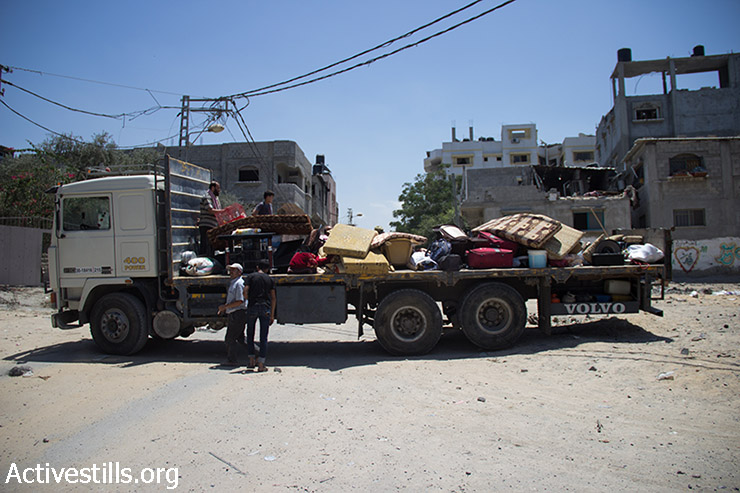 Palestinians collect their belongings in Shujaiyeh, a neighborhood in the east of Gaza City, during a ceasefire, July 27, 2014. During the ceasefire on July 26, many Palestinians went back to Shujaiyeh to inspect the damages together with medics who attempted to rescue the injured or collect bodies. Dozens of bodies were collected but many remain as Palestinians do not have all the necessary equipment to dig. Israeli attacks turned the neighborhood into a scene of utter devastation, with entire buildings flattened and thousands forced to flee. (Basel Yazouri/Activestills.org) 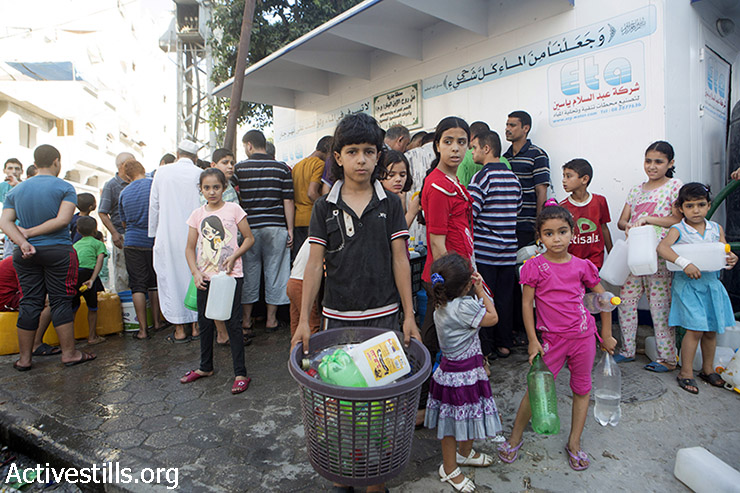 Palestinians collect water in Shati’ Refugee Camp, Gaza City, August 2, 2014. According to OCHA, 1.5 million people not taking refuge in shelters have no or extremely restricted access to water in Gaza. (Anne Paq/Activestills.org) 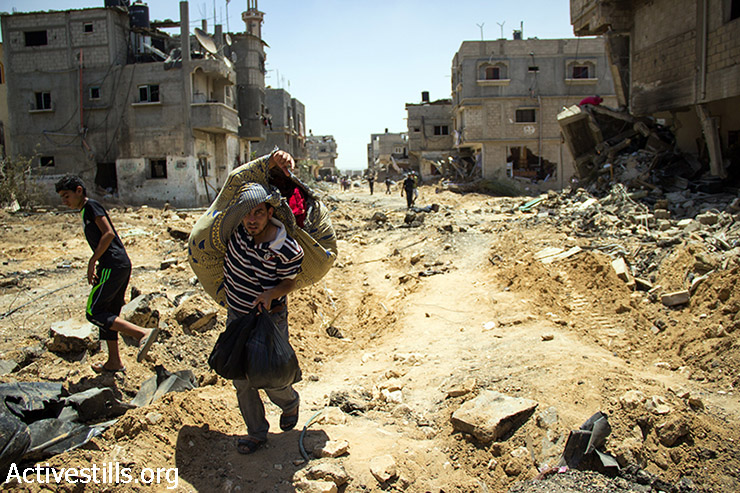 Palestinians salvage some of their belongings from the village of Khuza’a, east of Khan Younis August 1, 2014. Hundreds of residents returned to Khuza’a at the beginning of a ceasefire to recover bodies and salvage possessions. Khuza’a has been cut off from the rest of the Gaza Strip and occupied by Israeli soldiers. A large number of residents have been killed and injured, and many homes were destroyed. Most residents fled the Israeli attacks. (Basel Yazouri/Activestills.org) 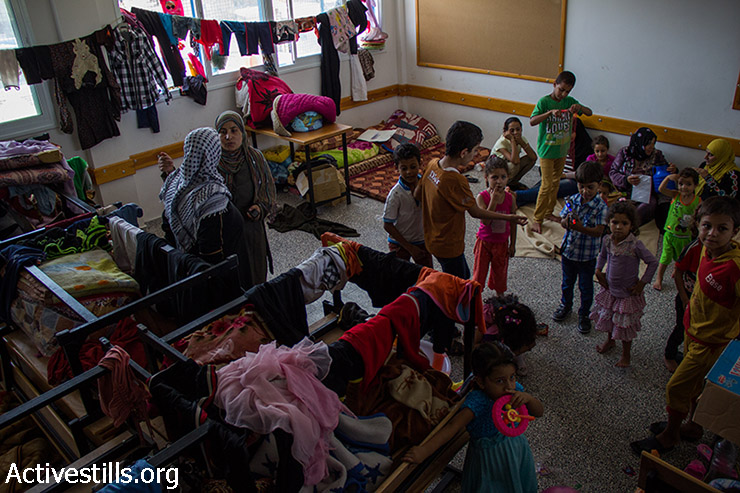 Displaced Palestinians on the first day of Eid, in a classroom of an UNRWA school that had become a shelter, Gaza, July 28, 2014. (Basel Yazouri/Activestills.org) 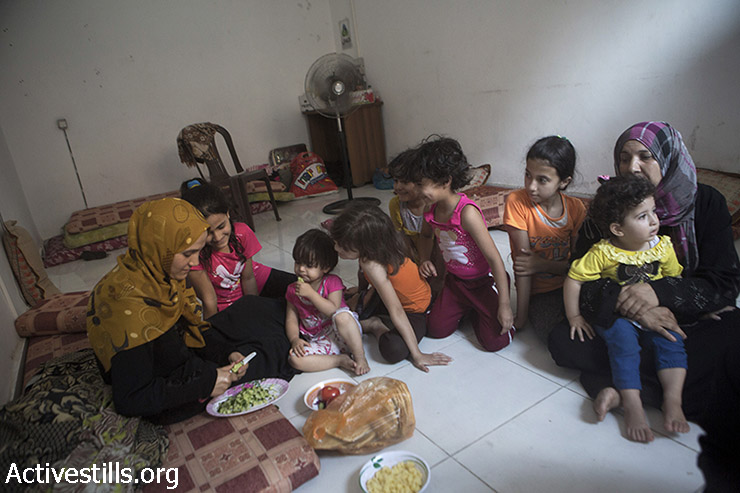 The family of Amal Al-Athamna, from Beit Hanoun, stays in a store near Kamal Edwan Hospital, Jabalyia, Gaza Strip, July 24. Beit Hanoun has been heavily bombed since the beginning of the Israeli assault and many people left the area. (Anne Paq/Activestills.org) 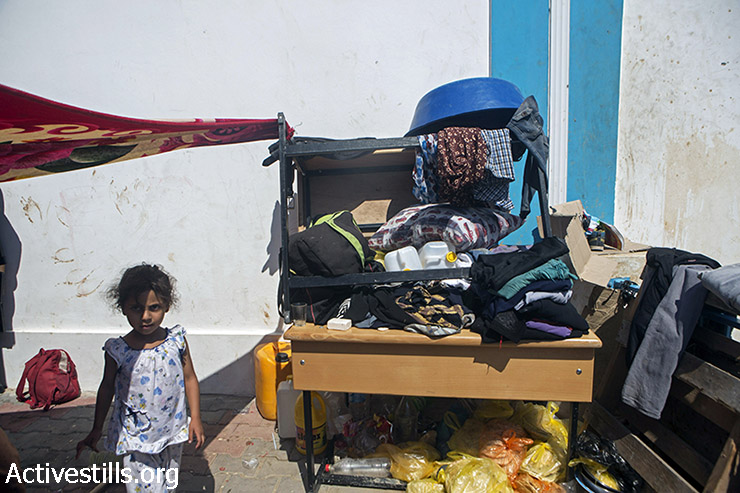 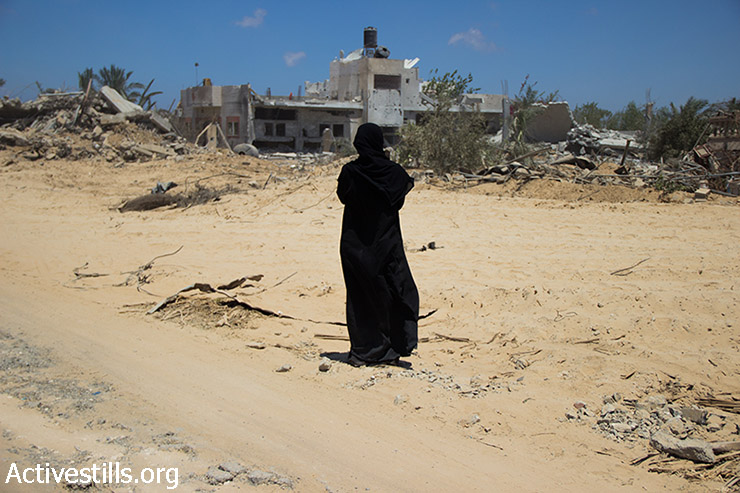 Palestinians look over Khuza’a neighborhood following bombardment by Israeli forces, Gaza Strip, August 3, 2014. Khuza’a came under heavy shelling on Monday night, July 21. The Israeli army ordered all the inhabitants of the village, nearly 10,000 people to leave. Khuza’a remained a closed military zone, and only the International Committee of the Red Cross managed to secure a few brief entries into the village to evacuate some of the injured, killed and other civilians. Most residents fled the village but some stayed behind.
(Basel Yazouri/Activestills.org)