Approximately 600 African asylum seekers were released from Holot on Tuesday morning, following a High Court ruling. But their ban from entering Tel Aviv or Eilat — where much of their community lives — left them feeling helpless and confused. Hundreds of asylum seekers leave Holot detention center, two weeks after a High Court ruling ordered the release of all asylum seekers held there for over a year, August 25, 2015. (photo: Oren Ziv/Activestills.org)

Hassan, a Sudanese asylum seeker, looks on as he stands outside Holot detention center, where he has been held for the past 20 months. Tuesday was supposed to be a happy day for him — the day he was being released following a High Court ruling two weeks ago.

But the decision by Interior Minister Silvan Shalom, which forbids the released asylum seekers from living in Tel Aviv and Eilat, caused Hassan to decide to stay in Holot. “They told me this morning that if I refuse to be released, they will take me to Saharonim prison, and that I will not be able to stay in Holot,” he told +972. Eventually he agreed to be released, and decided to look for friends to stay with outside of Tel Aviv.

Although the state has attempted to present Holot as an “open detention center,” and despite the fact that the number of roll calls per day has been reduced from three to one, Holot does not allow these people to lead normal lives. The detainees there have repeatedly complained of poor food, of being stuck in the middle of the desert and of having no way of getting to work or studies. At 8:30 a.m., immigration enforcement authorities began releasing hundreds of asylum seekers who have been detained in Holot for over a year. According to the High Court ruling, detention of refugees Holot will be limited to one year. A total 1,200 asylum seekers are expected to be released in total.

The 600 asylum seekers released Tuesday morning (600 more are expected to be released the following day) gathered outside Holot, looking confused and carrying with them the few items they have managed to amass. For many, the decision to prevent them from working and living in Tel Aviv and Eilat is “worse than imprisonment,” according to the released detainees.

Without the option of living and working in the area where the majority of their community lives — or even to be hosted by their friends — until they find a job, the asylum seekers are worried about their future. 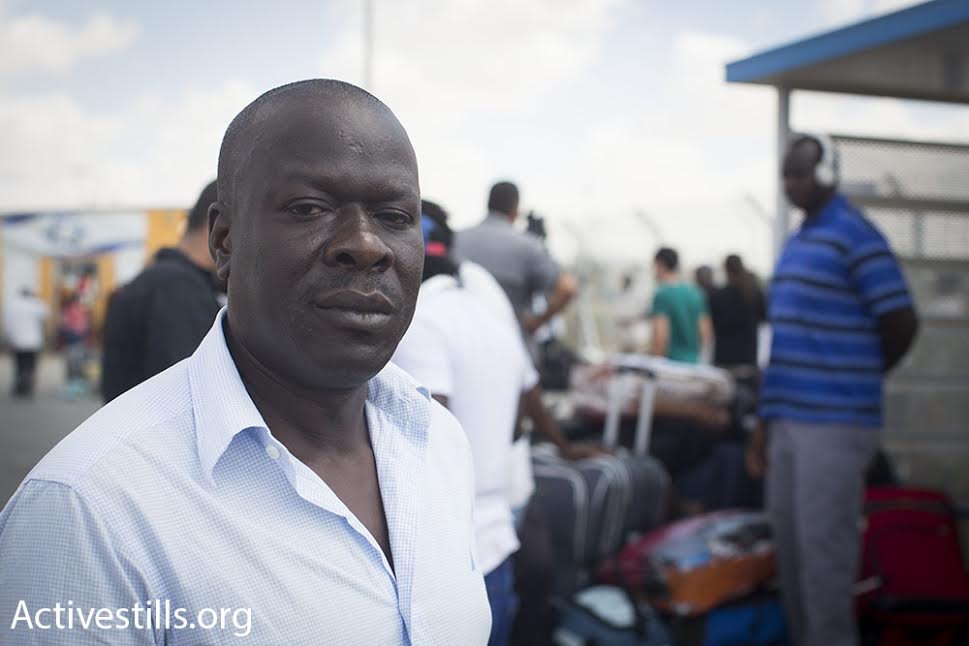 Every asylum seeker released Tuesday morning was given 64 shekels, of which 23 were used on a bus ride to Be’er Sheva. From there many continued on to the cities of Ashkelon, Ashdod, Hadera, among others.

Their release forms state that their permit is valid for two months, and that they are forbidden from working or living in Tel Aviv and Eilat. At the end of those two months, they will need to go to the Interior Ministry and ask to renew their conditional release visas. An attempt by Haaretz to find out what the punishment for violating their conditions of release remained unanswered by the Interior Ministry.

A Channel 2 news team stood at the entrance to Holot on Tuesday morning, asking every released detainee where he was planning on going. Many answered “I have nowhere to go” in shame. Others admitted off camera that they were going to Tel Aviv. “I have nothing to look for somewhere else,” one of them told +972. “Work, friends, and a feeling of home — all of them are in Tel Aviv.” 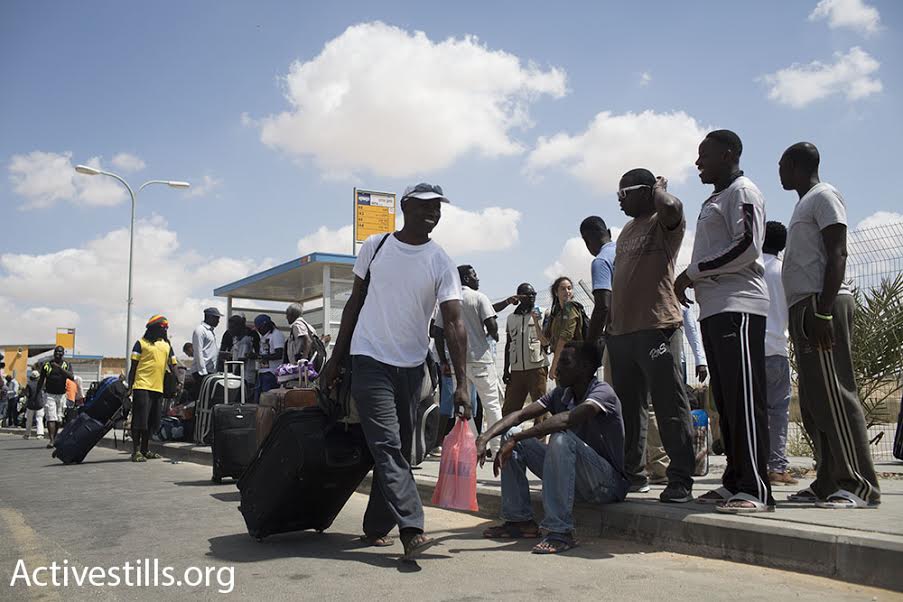 The ban on entering Tel Aviv caused much confusion among the asylum seekers, who were unsure whether they are allowed to switch buses in Tel Aviv on their way to the north, visit friends, or use services provided to them by aid organizations located in the city.

From prison to a hotel

Jamal Omar, an asylum seeker who is expected to be released tomorrow and has worked in an Eilat hotel for years, took part in an Israeli reality show. As filming came to an end, Omar was promised a two-year scholarship for university studies. However, Omar was taken to Holot before the show even aired, dashing his dreams.

“I worked in Eilat, and my boss suggested that I work for the same hotel chain in other cities, but I have yet to make a decision,” he added. Omar still hopes the show will make good on its promise for a scholarship. “I hope it will happen. That is what they promised me.” 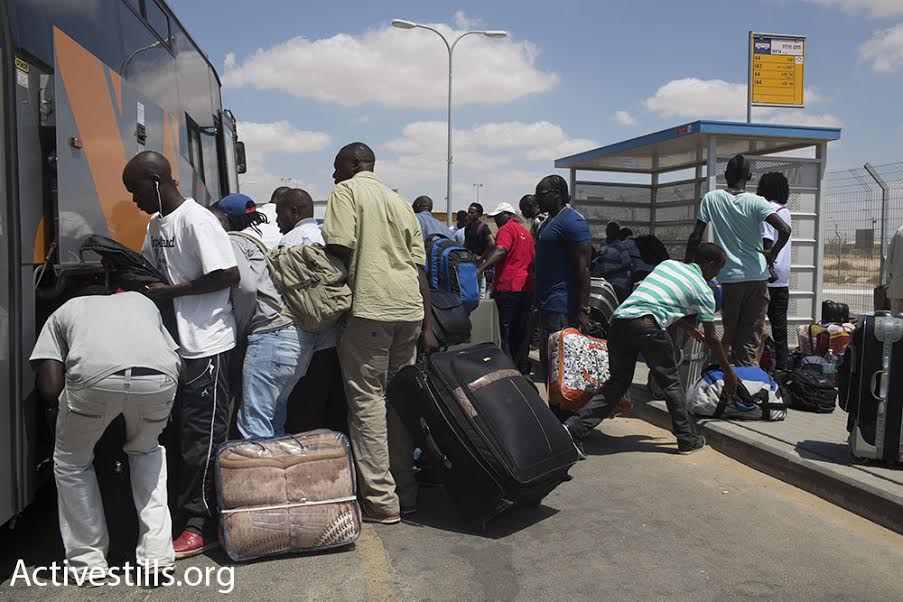 Dozens of asylum seekers crowd around a bus after being released from Holot detention center. According to Interior Minister Silvan Shalom, the asylum seekers are forbidden from living or working in Eilat and Tel Aviv, where large refugee communities live, August 25, 2015. (photo: Oren Ziv/Activestills.org)

“The problem is that the state does not want to provide a real solution. Instead of preventing us from coming to Eilat or Tel Aviv, they need to give us work permits, that way we can figure things out anywhere in Israel. I haven’t decided where I will go when I am released. Even after I leave I will feel like I was jailed for no reason, without breaking a single law. I have been imprisoned for 17 months, and right now they are sending me back to live in different cities, while summoning new asylum seekers.”

As the asylum seekers were getting ready to leave Holot, Nissan Ben Hamu, the mayor of the southern city Arad, announced that he will not allow asylum seekers to enter his city. A photo that went viral on social media showed city inspectors standing at the entrance to the city, ostensibly to prevent asylum seekers released from Holot from entering the city. 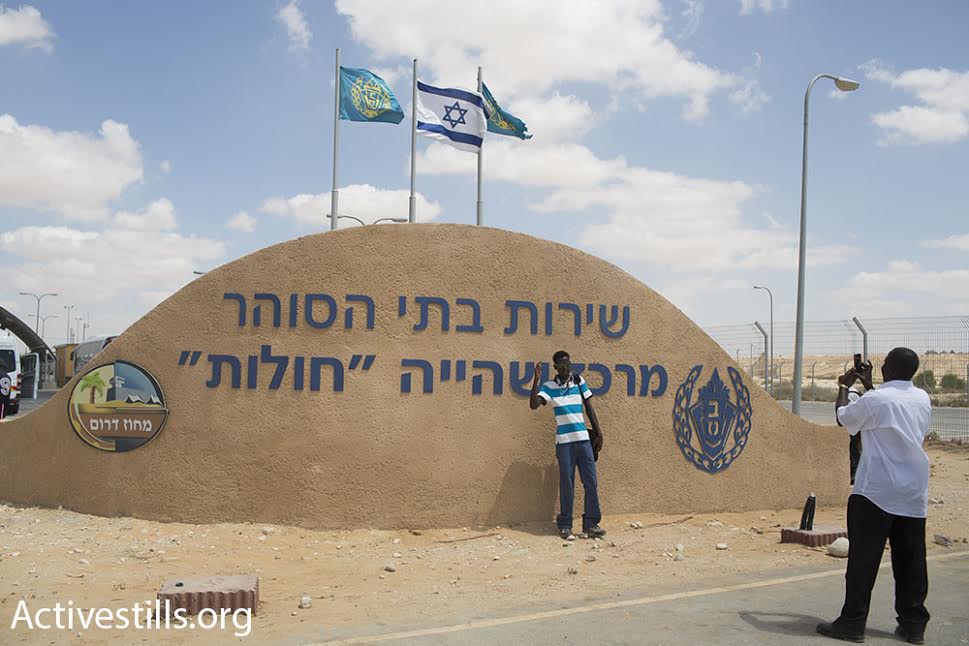 An asylum seeker poses for a photo outside Holot detention center on the day of his release, August 25, 2015. (photo: Oren Ziv/Activestills.org)

“This morning, following a decision by the High Court of Justice, several hundred infiltrators were released from Holot detention center… the decision of the Interior Minister to prevent their entry into Tel Aviv and Eilat raises the probability that these people will move to cities in the southern part of the country,” Ben Hamu wrote on his Facebook page. “As of this morning I instructed municipal inspection and policing teams to reinforce their presence at entry points to the city, including the central bus station and throughout the city.”

According to an Arad city council member, the decision does not constitute official policy, but rather is a PR stunt by the mayor. Approximately 20 asylum seekers who had lived in the city prior to being sent to Holot entered Arad without a problem at around noon. In the city center, inspectors — who do not have the same authority as policemen — detained a number of asylum seekers who had returned to the city. They were released after a short while.

Approximately 60 asylum seekers are expected to arrive in Arad on Tuesday.