Hundreds of women and men march to protest the inauguration of Donald Trump outside the U.S. Embassy in Tel Aviv. 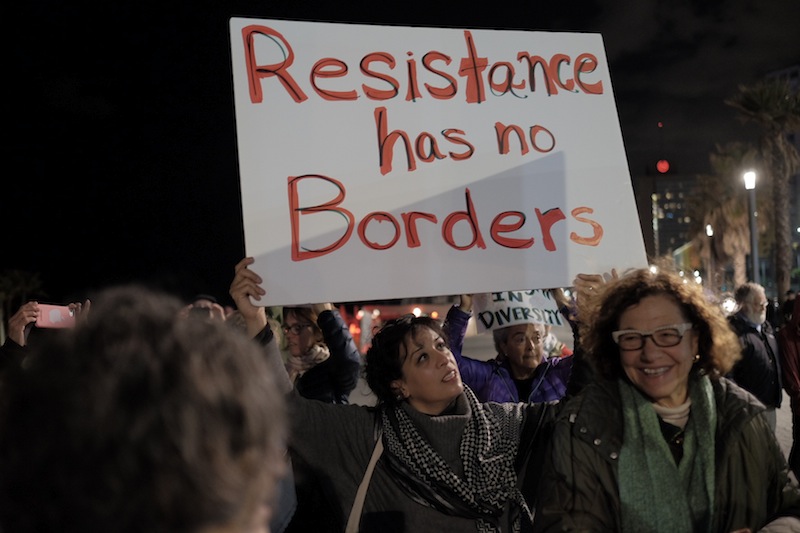 Around 400 people, mostly dual American-Israeli citizens, gathered in front of the U.S. Embassy in Tel Aviv on Saturday night, in solidarity with the Women’s March taking place in Washington D.C. following the inauguration of Donald Trump. The Tel Aviv march was one of dozens that took place across the world in solidarity with the march on the U.S. capital, where protestors rallied around issues such as women’s rights, reproductive rights, anti-racism and immigration.

The march was organized by the local Israeli chapter of Pantsuit Nation, a Facebook group that was used to rally support for Hillary Clinton during the election campaign, as well with Jewish activist groups All That’s Left and If Not Now. 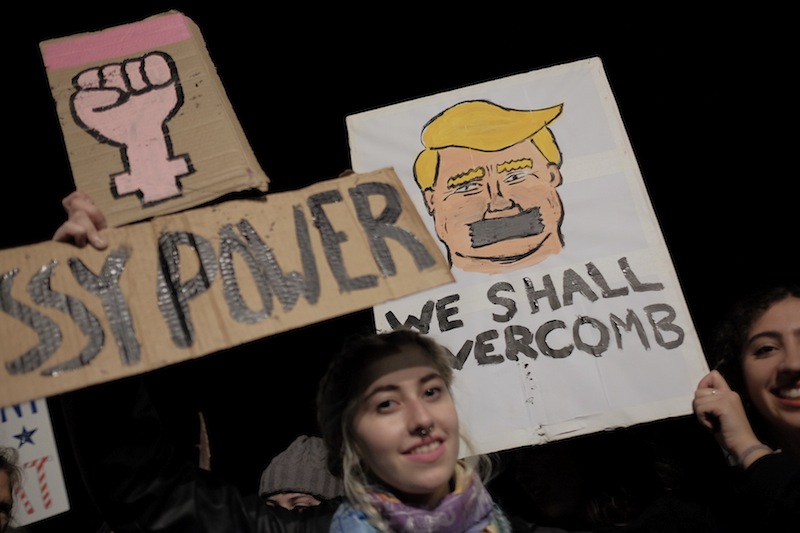 The speakers and marchers chanted not only for women’s rights, but also LGBT, Palestinian, refugee, immigrant and minority rights, as well as against anti-Semitism and Islamophobia.

One speaker, All That’s Left activist Liya Rechtman, wearing a hat that read “Make America Gay Again,” told the crowd she had grown up in a Jewish home in the U.S., which meant she came from an activist home. “To be a Jew is to demand justice — to be a Jew is to resist Trump,” she said. 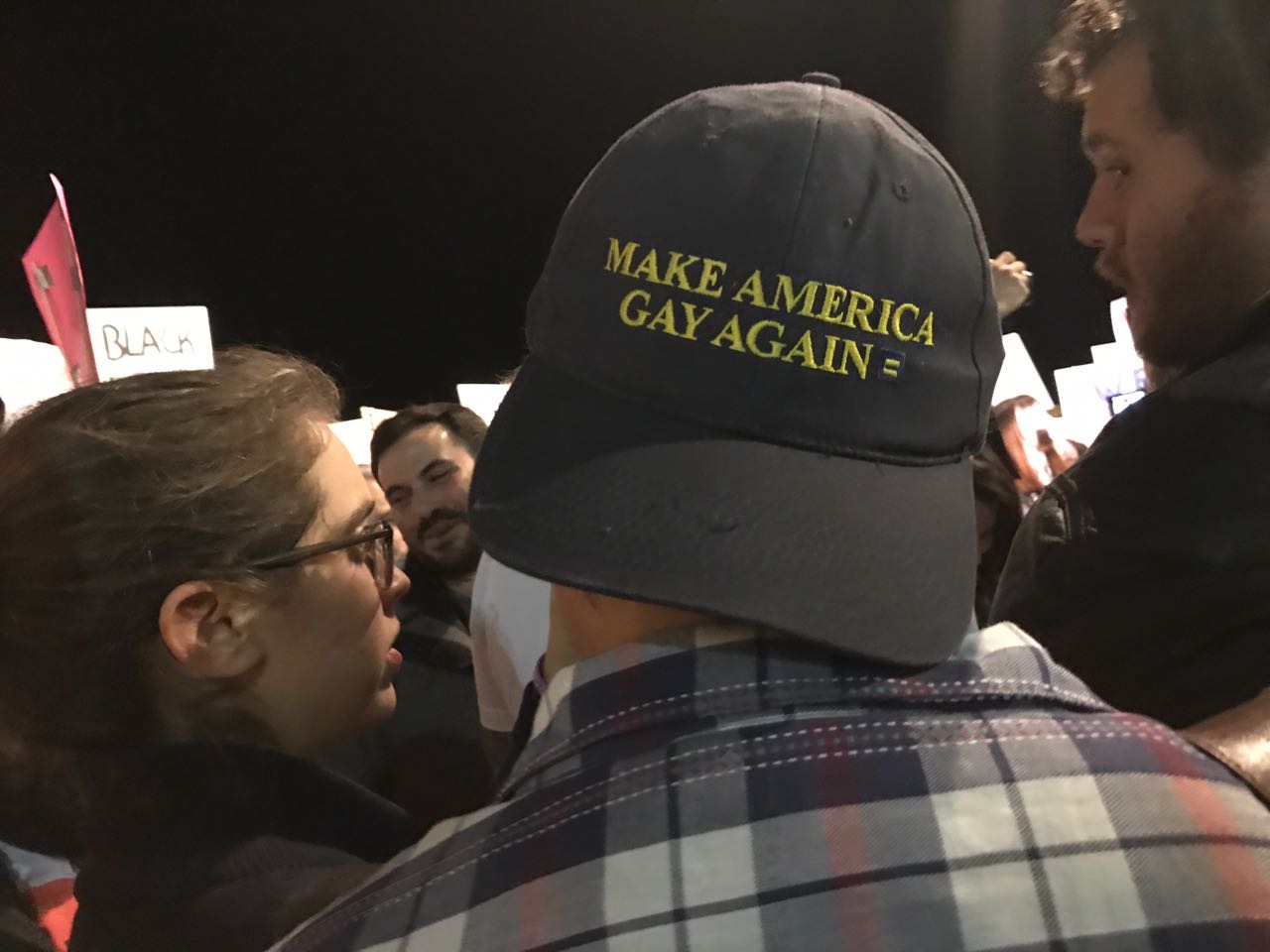 If Not Now activist Simone Zimmerman also spoke, asking the crowd why Trump and Netanyahu didn’t speak out after dozens of Jewish institutions across the U.S. received bomb threats over the past few weeks.

“It is more clear than ever that we need a Jewish resistance that can say that our leaders failed us when they incite hatred and fear. We insist that we deserve a better world, and we will resist with everything we have to win it,” Zimmerman told the crowd.

Some members of the crowd chanted against the occupation and called to boycott David Friedman (Trump’s pick for ambassador to Israel). Another speaker, All That’s Left activist Erez Bleicher, mentioned solidarity with the women of Umm al-Hiran and Al-Araqib, two Bedouin villages in Israel that continue to face state violence and home demolitions. 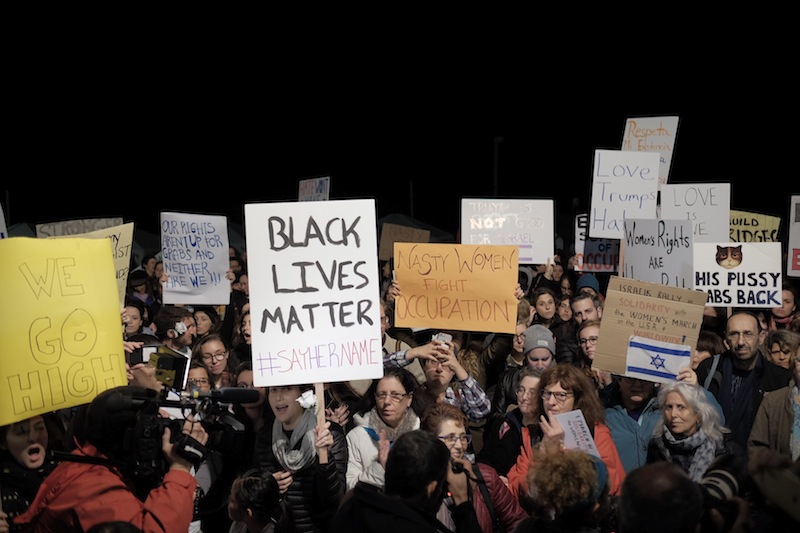 Democrats Abroad, the official Democratic Party arm for Americans living outside the United States, were conspicuously missing from the protest. Several protesters said their leadership had decided to hold a small meeting at home, as they are still in mourning.