After more than two years of vigils by Palestinian Christians that gained widespread international attention, the Israeli High Court issued a preliminary order questioning the path of the separation barrier that would further divide West Bank land, cutting off the Cremisan monastery and a valley of olive groves. 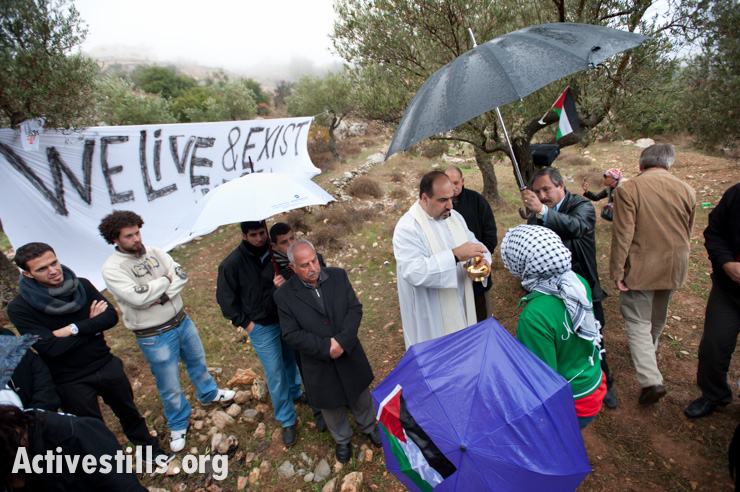 Bethlehem-area Christians joined by local and international activists gather for a Catholic mass to protest the Israeli separation wall that will cut off Beit Jala’s Cremisan monastery and winery from nearby West Bank communities, November 18, 2011.

“What do we do? We pray,” said Father Ibrahim Shomali to the crowd assembled in an olive grove in the West Bank town of Beit Jala. “Because we believe in God and we believe that one day he will hear our prayer and he will give us justice.”

For more than two years, in sunshine, rain and even snow, Father Shomali, a local Catholic priest, has led a weekly mass as a form of non-violent witness against the Israeli separation barrier that threatens to divide the Cremisan monastery, as well as vast hillside olive groves, from the rest of the Beit Jala community. Father Shomali made this statement during the last vigil prior to an Israeli High Court hearing on January 29 to decide the barrier’s route. 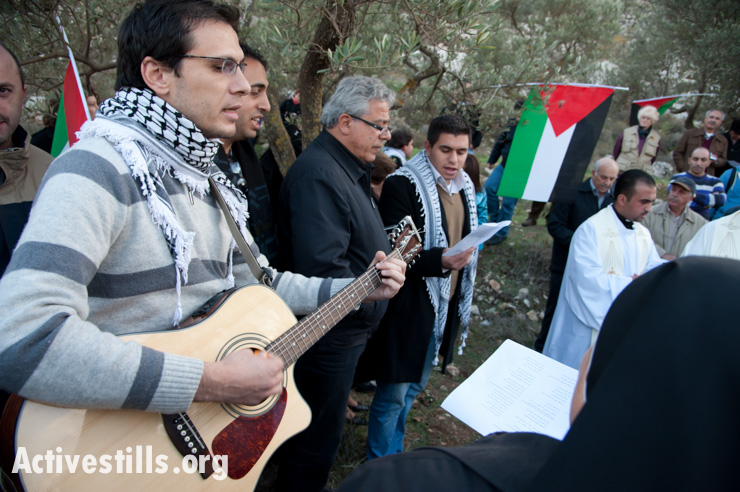 Though organized by the local Palestinian Christian community, this unique protest has welcomed activists and community leaders of all faiths, as well as Palestinian government officials, international church leaders, diplomats and journalists. The story succeeded in reaching major media outlets including BBC and NPR, and was featured on CNN’s Christmas broadcast. 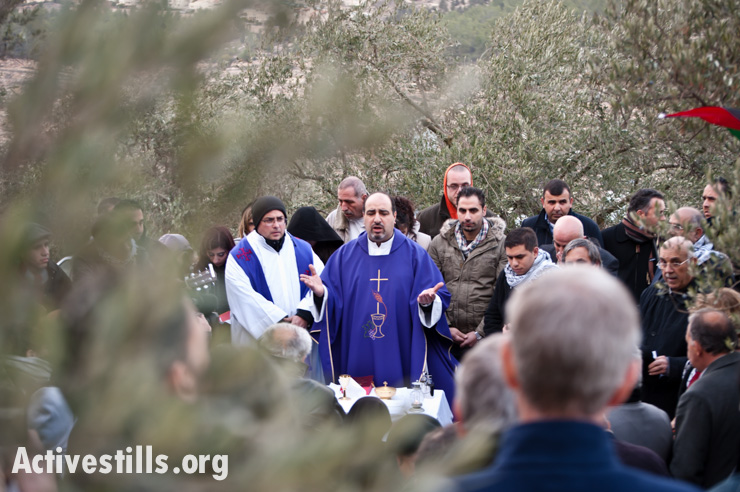 Palestinian President Mahmoud Abbas devoted an entire paragraph of his 2013 Christmas speech to the issue, saying:

We pray that the 58 Palestinian Christian families of Cremisan have strength in their peaceful struggle against the annexation wall, which is stealing their land and dooming their future. We reassure them that their struggle goes beyond the borders of Palestine: their prayers and actions have prompted many world leaders to raise the Cremisan issue in our meetings. Israel has been pressured on this issue and many other issues raised through civil society campaigns, a very good example of the merits of non-violent resistance. 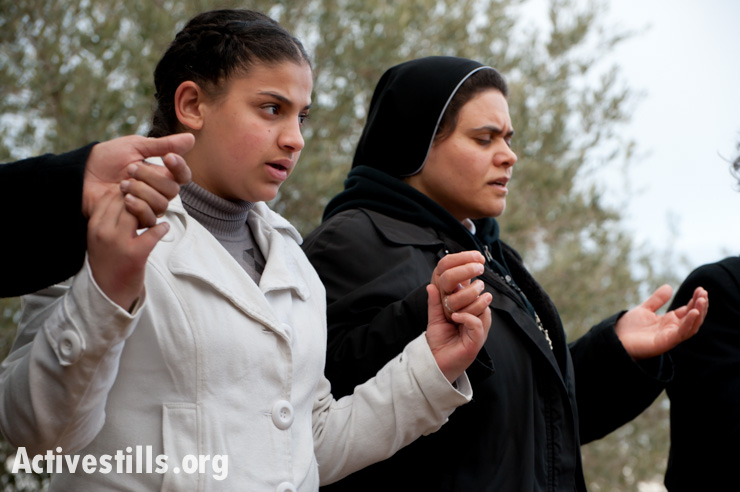 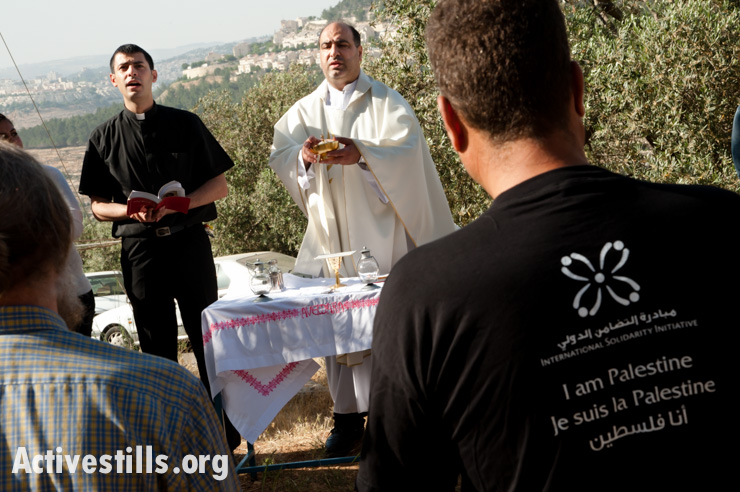 According to a detailed report by Ma’an News, Israeli officials claim that the Vatican initially agreed to their route for the wall, which put the Salesian monastery and convent on the Israel-controlled side. Church leaders deny any such agreement. But while affirming its opposition to the wall in principle, the monastery stopped short of joining the legal petition brought by local landowners against the barrier’s route, maintaining in a 2009 statement that, “Salesians do not get involved in issues and decisions to determine boundaries between the two states.” In October 2010, the convent broke from the monastery and joined the Palestinian legal case, saying their wishes had been misrepresented by the Israeli army. 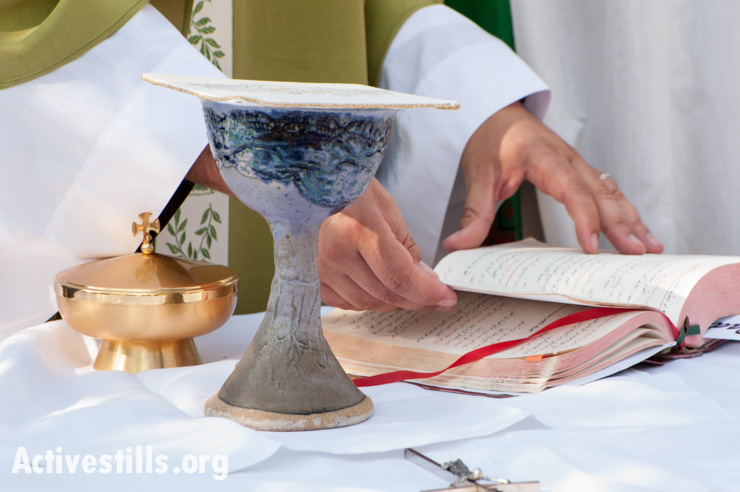 However, within a year of the weekly vigils and corresponding media attention, church representatives explicitly condemned the planned route, stating that they “strongly call on the State of Israel to restrain from its plan to separate Cremisan valley from Bethlehem.” That same year, monastery representatives testified in court in support of the Palestinian landowners. Following a visit with Pope Francis in Rome last year, Father Shomali is confident that the pontiff will lend support to their case during a visit to the region in May. 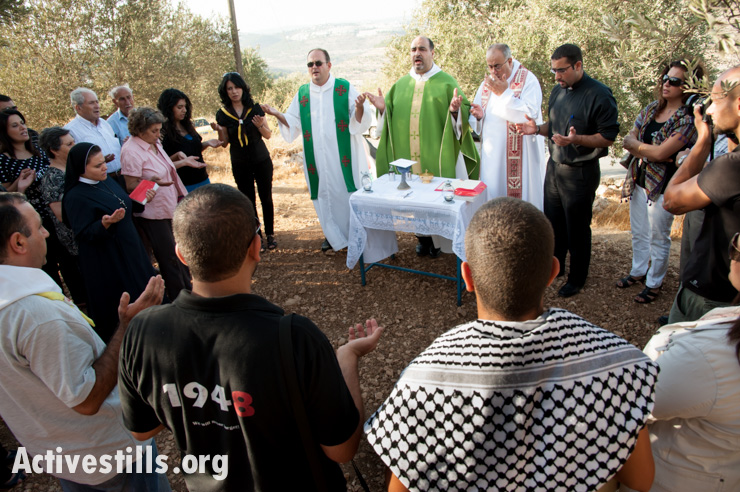 Yet despite the vigil’s success in raising support in church, media and diplomatic circles, last April Israel’s Special Appeals Committee for land seizure under emergency law decided only to modify the barrier’s path to allow the convent and school to remain accessible to the community, but still cutting off the monastery and its winery, which employs local workers, as well as most of the valley’s olive trees, from the Beit Jala community. The nuns would lose access to 75 percent of their land and the school would lie in a military zone surrounded on three sides by the separation wall (map). 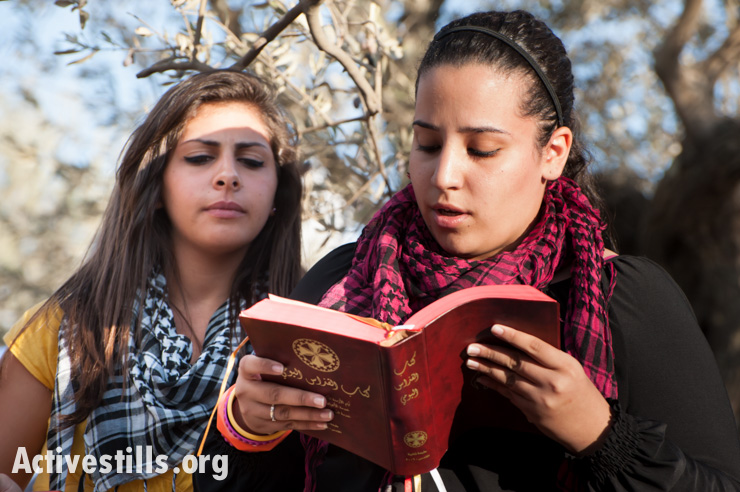 In its recent hearing of the community’s appeal against this decision, the High Court of Justice first delayed its verdict and then on Monday of this week issued a preliminary order giving the State Attorney two months to present evidence proving the necessity of the currently proposed route. A new hearing has been scheduled for the end of July. As a result, no work will proceed on the wall and all land seizure orders issued to local residents are at least temporarily frozen. 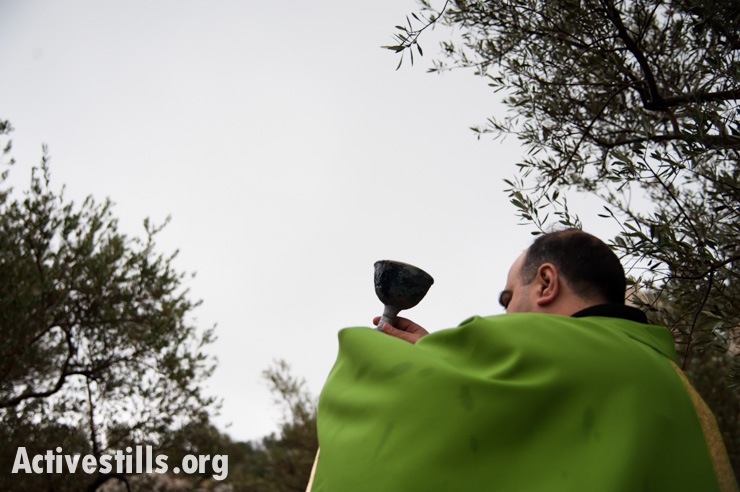 “The court leaves the burden of proof now on the side of the State,” says Anica Heinlein, advocacy officer for the Society of St. Yves Catholic Center for Human Rights, which is providing legal representation for the convent. Heinlein also cited the broad international and clerical presence in court as a potential factor.

“The case is not over until a final ruling is given,” says Advocate Zvi Avni, a lawyer for St. Yves. “We definitely have new hope. The answer of the court is a good sign.”

According to Father Shomali, the weekly vigils will continue every Friday afternoon at 3:30 until the case is closed. 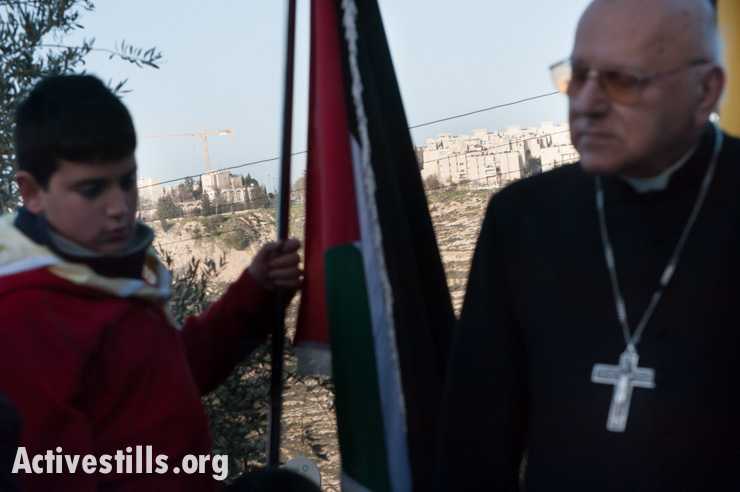 But regardless of any ruling by the Israeli legal system, a 2004 advisory ruling by the International Court of Justice has stated that, “[t]he construction of the wall being built by Israel, the occupying Power, in the Occupied Palestinian Territory, including in and around East Jerusalem, and its associated régime, are contrary to international law.”

According to Father Shomali, “The only reason for the wall is to connect two settlements.” These are Gilo and Har Gilo, the former expanding over the hilltop opposite Cremisan and forming the backdrop of the weekly mass. Like all settlements in the occupied Palestinian territories, they too are illegal under international law. And here, as with 85 percent of its route, the barrier would take more Palestinian land instead of separating the West Bank from Israel on the internationally recognized border, or Green Line. 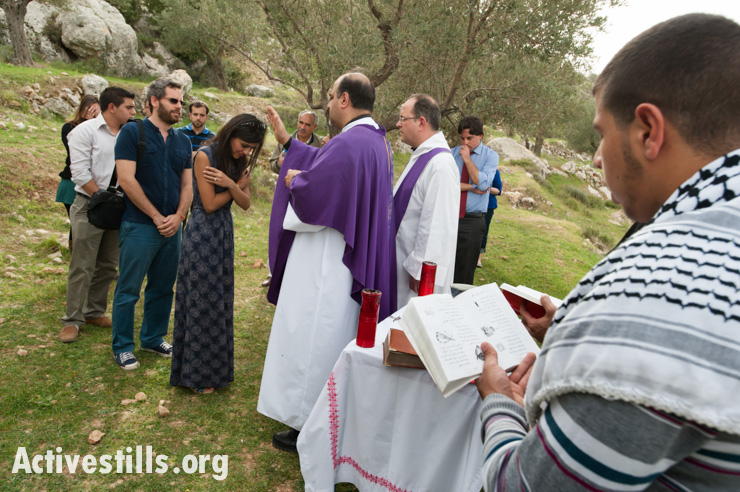 According to the Applied Research Institute Jerusalem (ARIJ), Gilo and Har Gilo currently occupy 3,147 dunums of Beit Jala land, confiscated by Israel when it unilaterally redrew the Jerusalem municipal boundary after the 1967 war in a move that no other nation has recognized as legitimate. If the barrier is built as planned, the total loss to Beit Jala would be 6,674 dunums, isolating 47 percent of its land behind the wall. 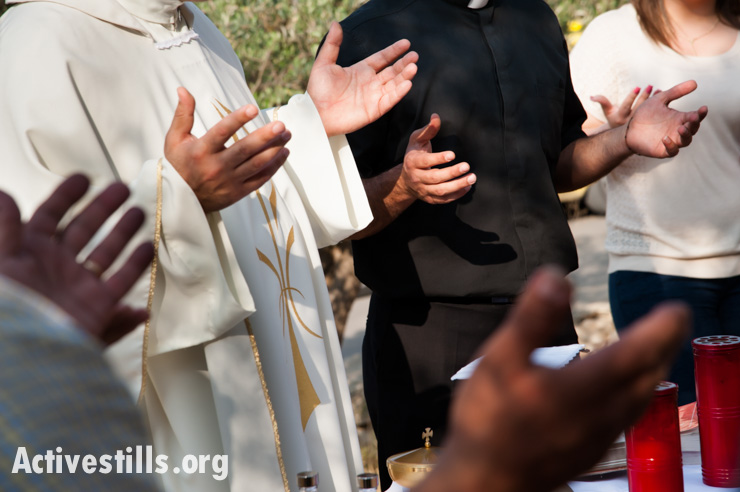 Israeli officials maintain that the barrier is being built for security reasons. Many believe that the wall stopped Palestinian suicide bombings, the last of which occurred in February 2008. At that time, these and other acts of violence had killed 1,012 Israelis since October 2000. During the same period, Israelis killed 4,536 Palestinians.

But as the Cremisan case illustrates, only two-thirds of the barrier’s planned route is complete. Large gaps, which could easily be infiltrated by would-be attackers, allow tens of thousands of unauthorized Palestinians to enter Jerusalem or Israel on a daily basis to find work. The fact that no suicide bombings have occurred despite this relatively easy access indicates that the wall does not deserve credit for stopping them. Even former Israeli Defense Minister Moshe Arens told an Israeli newspaper, “it’s clear there is no connection between the wall and the cessation of attacks.” 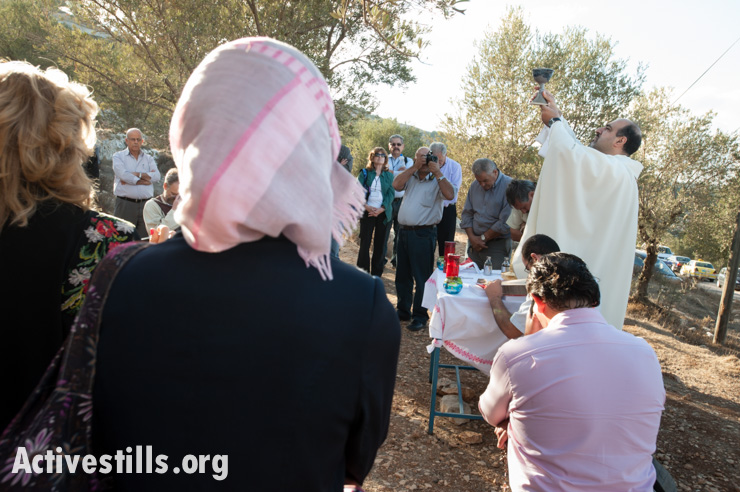 “If they want security for Jerusalem, five kilometers away from here is the Green Line, and they can build the wall there if they want to,” said a Palestinian official at one Friday’s mass. Refusing to recognize the Israel court’s jurisdiction over Palestinian territory, he added, “This case in particular shows the need for Palestine to go to the International Criminal Court.” 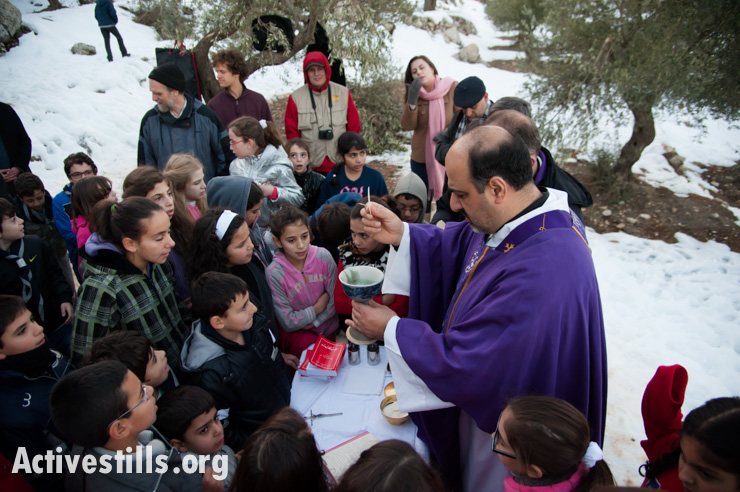 The Palestinian Authority has been pressured to refrain from confronting Israeli in international court following its upgraded UN status to “non-member observer state” in 2012. Yet while Palestine has refrained from such “unilateral actions,” most recently in order to perpetuate the U.S.-led peace process, Israel continues to build its wall and settlements throughout occupied Palestinian territory. Even if the High Court makes a final decision to move the barrier’s route in the case of Cremisan, it will almost certainly still be beyond the Green Line. Given this reality, Palestinians will continue seeking answers to their prayers for justice in higher courts. 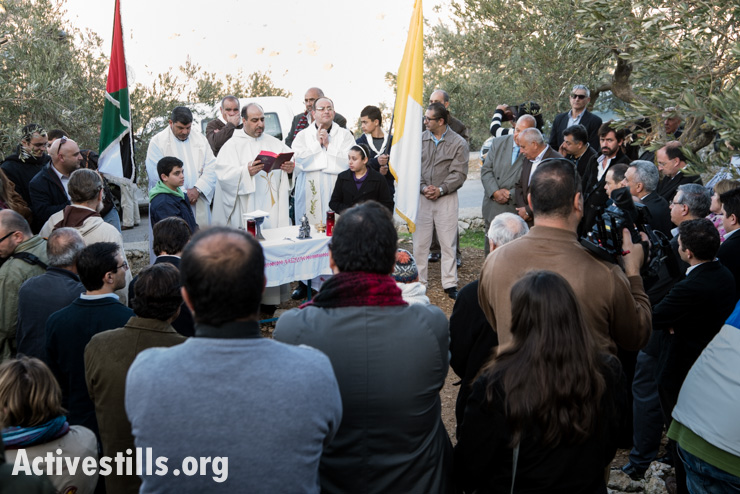