At one of the most consistently peaceful weekly demonstrations against the Israeli occupation, soldiers arrest a Palestinian activist in front of his three-year-old twin sons. 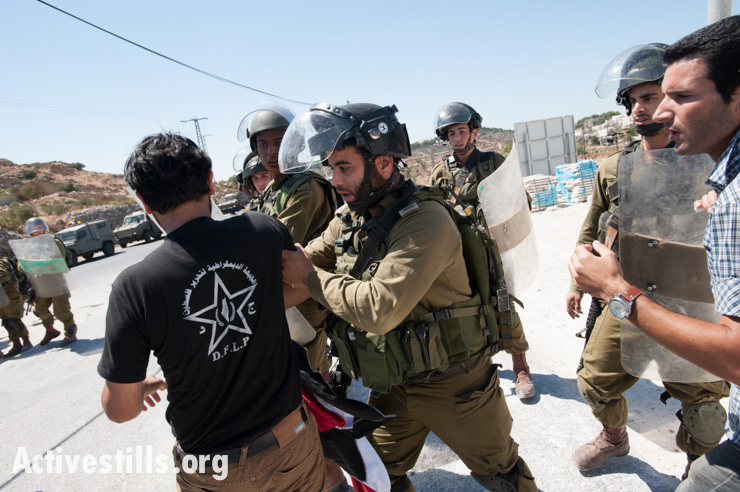 Israeli forces arrest Mohammad Brijiah on the pretext that he was “behaving violently” against the soldiers at a weekly demonstration against the Israeli separation barrier, Al Ma’sara, West Bank, September 6, 2013. (photo: Ryan Rodrick Beiler/Activestills.org)

Friday, September 6, Israeli forces arrested Palestinian activist Mohammad Brijiah at the weekly demonstration against the separation wall in the West Bank village of Al Ma’sara. Brijiah’s twin three-year-old sons , who were present at the demonstration, watched helplessly as soldiers took their father away. He will be held until the morning of Sunday, September 8 when he will face a military court hearing at Gush Etzion prison.

As is usual in this weekly demonstration, members of the Al Ma’sara community, accompanied by Israeli and international solidarity activists, marched from their village toward agricultural lands that will be cut off if the separation barrier is built as planned. The demonstration in Al Ma’sara, though modest in size, is one of the most consistently peaceful demonstrations in the West Bank, and children and families often participate. Episodes of stone-throwing are extremely rare, though Israeli forces still occasionally respond to the march with sounds bombs, tear gas, and as this day, arrests of activists. This week, as about 30 marchers entered the main road from the village, soldiers blocked their path and pushed them back using riot shields. Brijiah verbally confronted soldiers who responded by hitting him with their shields. When Brijiah pushed back against the shields, he was arrested.

According to Maan News, an Israeli military spokesperson claimed that Brijiah was taken into custody because he was “behaving violently” toward soldiers. The spokesperson also claimed that Israeli forces fired riot dispersal means, which this reporter observed firsthand was simply untrue on this particular day. It would seem that the military felt the need to exaggerate the actions of its own forces as well as Brijiah’s behavior in order to justify their actions. Brijiah’s arrest follows a pattern of arrests and harassment of nonviolent protesters by the Israeli military. 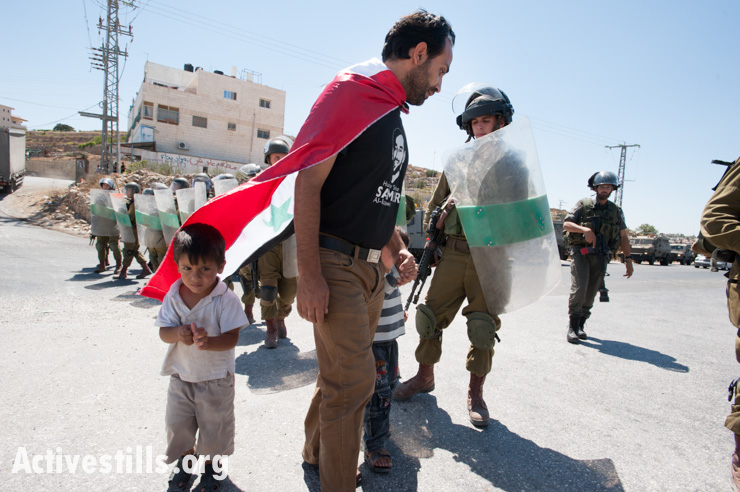 Palestinian activist Mohammad Brijiah and his twin three-year-old sons confront Israeli forces blocking the road from their West Bank village of Al Ma’sara during a weekly demonstration against the separation barrier, September 6, 2013. If built as planned, the wall would cut off the village from its agricultural lands. 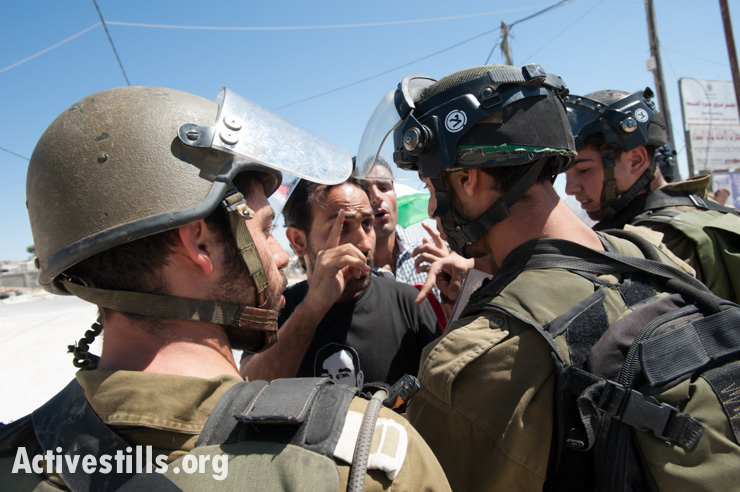 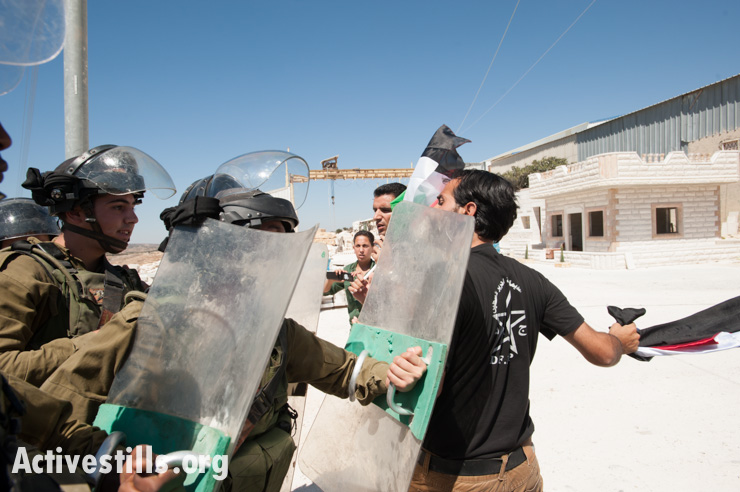 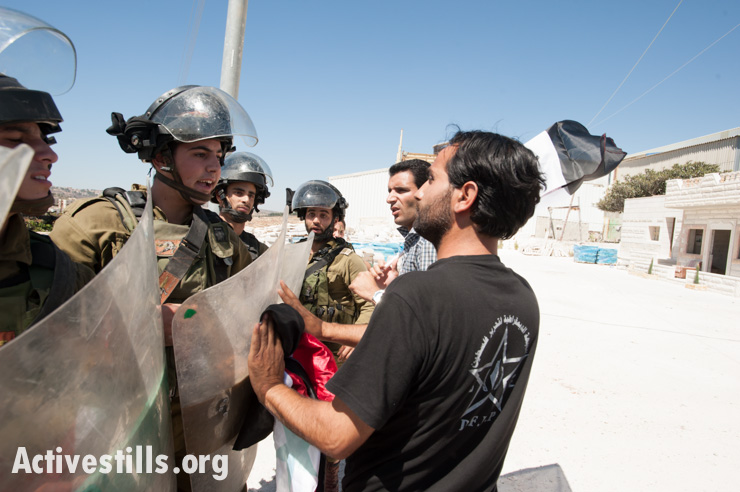 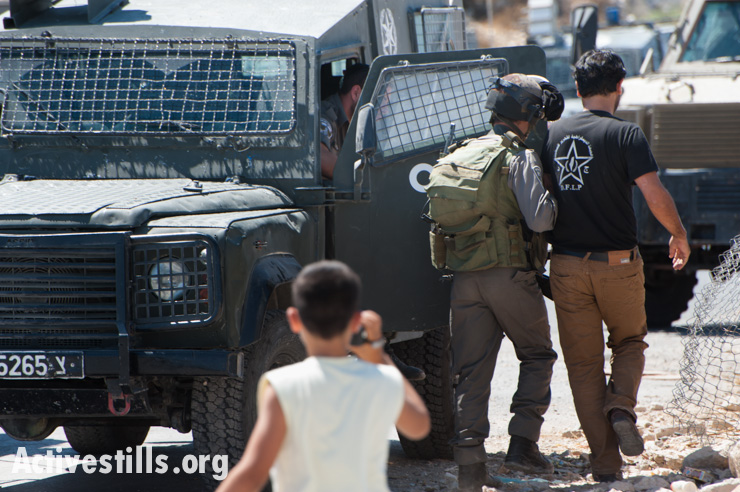 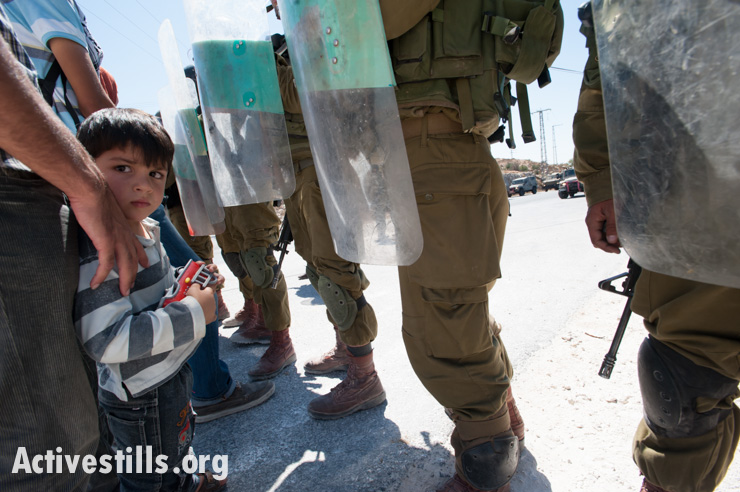