A Border Police officer pepper sprays Palestinian journalists covering a West Bank protest. The police claims it is ‘looking into the incident.’

An Israeli Border Police officer assaulted medics and journalists at a well known junction in the West Bank Friday, according to photojournalist Fadi Arouri.

The incident took place near the Al-Bireh checkpoint, which abuts the Israeli settlement of Beit El— a spot known for frequent clashes between Palestinian youth and Israeli security forces. But Arouri says that journalists and medics were at a significant distances from the protestors when the incident he photographed (below), took place. 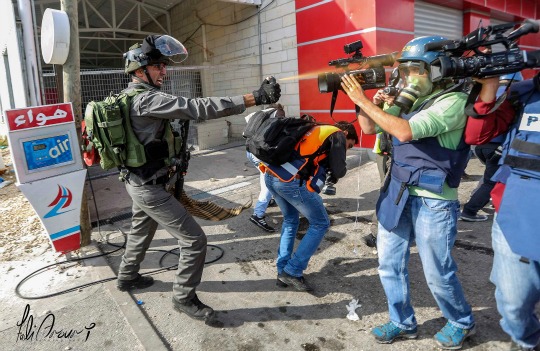 “He [the officer in the photo – LG) was chasing photographers, even struggling with some of us. He took the gas masks off some journalists to spray them directly in the face,” recounted Arouri. “He did it to two of them right in front of me.” Arouri added that he saw the officer “dragging a journalist and beating him.”

Arouri, who posted the photos on his professional Facebook page, noted that this particular member of Border Police — known as Magav — was well known to journalists who have been covering West Bank demonstrations over the past few years. He has been “among the worst” of security forces at Qalandiya, Bil’in, and Nabi Saleh — all places that are scenes of frequent Palestinian demonstrations. There have been many reported incidents of Israeli security forces using excessive or inappropriate force to stop demonstrations, many of which have been reported by +972 Magazine. 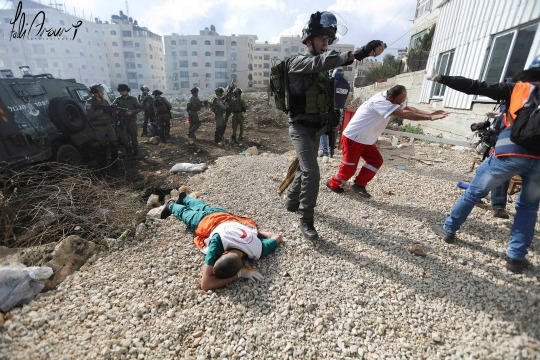 Arouri also took some video of the scene, where we can see clearly that the border police is just casually ejecting pepper spray at journalists who pose absolutely no threat, followed by disturbing scenes of a journalist wearing a flak jacket marked “press” is kicked, slapped and dragged by paramilitary forces. There are no protestors in sight, although the sound of tear gas being fired nearby is audible. The exchanges are a familiar mixture of Arabic, Hebrew and English, with the Palestinian press shouting that they are journalists and asking why they are being assaulted. Border Policemen are heard yelling “get back” and “move,” although there is no visible reason to harass journalists.

A second video provides context and even more shocking footage, with border police deliberately running over a Palestinian youth. One officer descends from the vehicle and steps on the boy he just ran over, then kicks him and beats him. When medics approach to help the injured youth, the border police officer pepper sprays them.

As far as violent incidents in the West Bank go, this one is not the worst. Recently, for example, +972 published images of undercover Israeli forces restraining an unarmed Palestinian youth and shooting him at point blank range in the thigh. On another occasion there was a widely reported incident of a soldier placing a 12-year-old boy with a broken arm in a choke hold. There are dozens of disturbing images and photos online. In more than 90 percent of these cases, there is no reporting in the mainstream media and no investigation by the Israeli authorities.

The images in this post are perhaps less dramatic, but they are just as disturbing. They illustrate that Israeli security forces in the West Bank operate with complete impunity. They also speak to a banality of violence on the part of Israeli forces that is completely out of control. Note that in the second photo there are several border police just a few meters away — but they don’t even look at their pepper spraying colleague, let alone try to stop him.

In the West Bank, soldiers treat Palestinians medics and journalists with the same violent, dismissive contempt as they do every other civilian. There is no way any police officer would get away with assaulting a journalist or a medical professional inside the Green Line, just a few minutes drive away. But in the West Bank, this is considered normal. Assault a journalist, incapacitate a medic, attack and try to arrest a 12 year-old boy, shoot a teenager in the leg while his arms are restrained — it’s pretty pedestrian stuff under occupation.

The police spokesperson told +972 that they are looking into the incident.