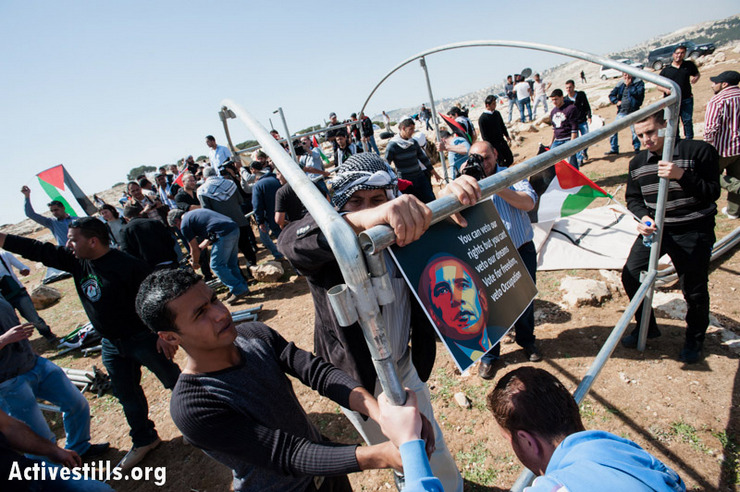 As U.S. President Barack Obama’s plane was landing at Ben Gurion Airport on Wednesday, Palestinian activists returned to the E1 area to establish yet another protest village in the tradition of Bab Al-Shams and other similar actions in recent months. Organizers named the new camp “Ahfad Younis” after the main character in the novel Bab Al-Shams (“Gate of the Sun”) which was the namesake of the original protest village in January of this year.

At first, a small force of Israeli Border Police watched as hundreds of activists gathered on a hillside across the valley from the Israeli settlement Ma’ale Adumim. Like all Israeli settlements in the occupied Palestinian territories, Ma’ale Adumim is illegal under international law. However, as evening drew near, Israeli forces surrounded the tent village. According to Ma’an News:

An Israeli military spokeswoman said hundreds of Palestinians established “an illegal settlement” and that security forces were in the area “to maintain order.” She said soldiers arrested the driver of a truck loaded with equipment including tents. Mohammad Khatib, a spokesman for the activists, said soldiers handed protesters a document declaring the area a closed military zone.

The action, while continuing the theme of similar protests against the Israeli occupation and settlement expansion, focused much of its message on the visit of U.S. President Barack Obama. According to a statement by the action’s organizers:

…the action today aims “first, to claim our right as Palestinians to return to our lands and villages, second, to claim our sovereignty over our lands without permission from anyone.  Third, our actions are aimed at protecting our land from continued confiscation and threat of settlement and colonization.  And Fourth to expand popular resistance as one form of resistance, out of many, that our people are engaged in everywhere.

As the action today coincide with President Barack Obama’s visit to the region, activists assert their opposition to the American Administration policy, which has been complicit in Israeli occupation and colonialism. Organizers stress: “An administration that used the veto 43 times out of 79 (between 1979 to 2011) in support of Israel and against Palestinian rights, an administration that grants military aid to Israel of over three billion dollars annually, can’t have any positive contribution to achieve justice and rights of the Palestinian people.”

The camp stood for four days before being forcibly evacuated on Saturday night, a day after President Obama had left for Jordan. Forty activists detained in the eviction were later released near Ramallah. 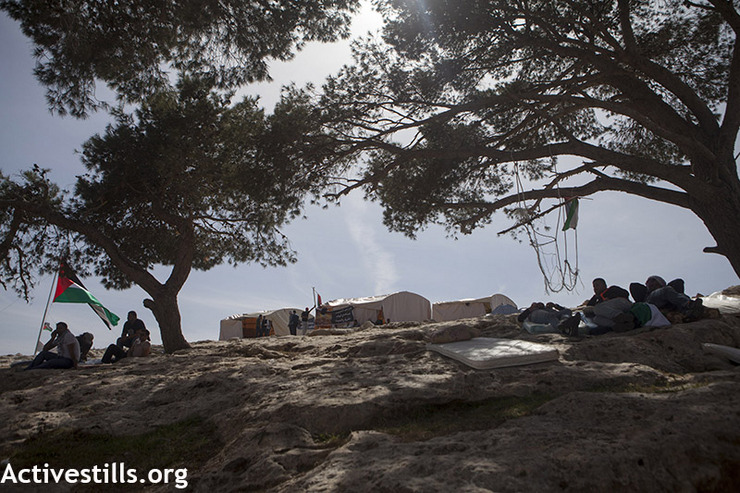 The new camp was named the Ahfad Younis (“Grandchildren of Younis”) neighborhood of Bab Al-Shams. 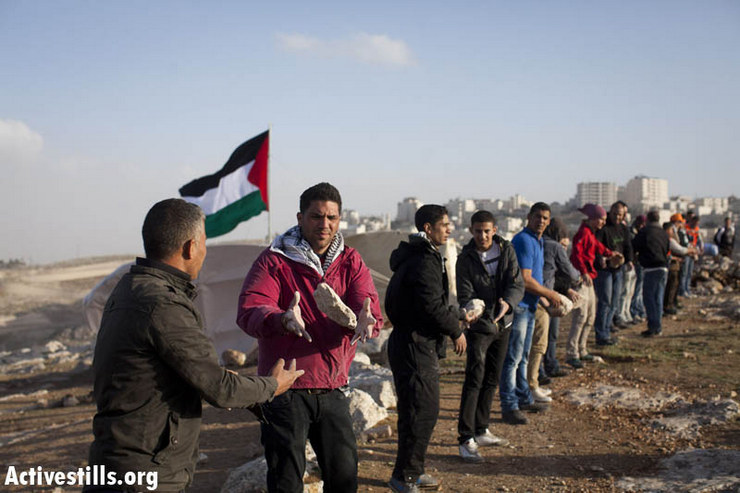 Activists form a chain to deliver rocks used in the building of a stone and mud structure in the camp. 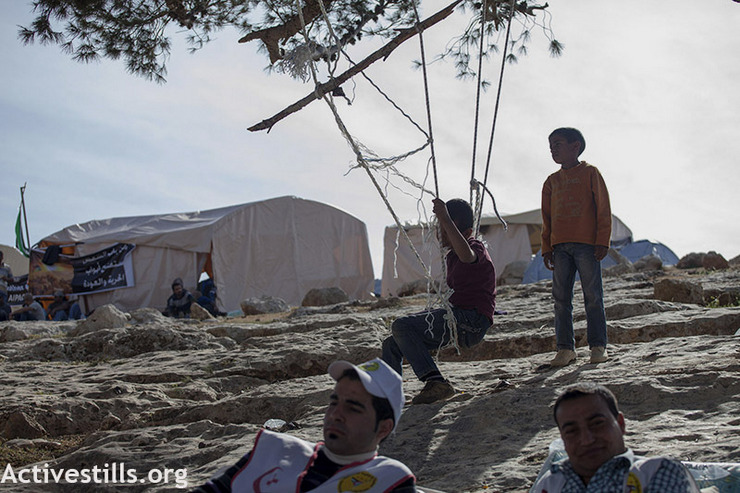 Children play on a makeshift swing hung from trees near the camp. 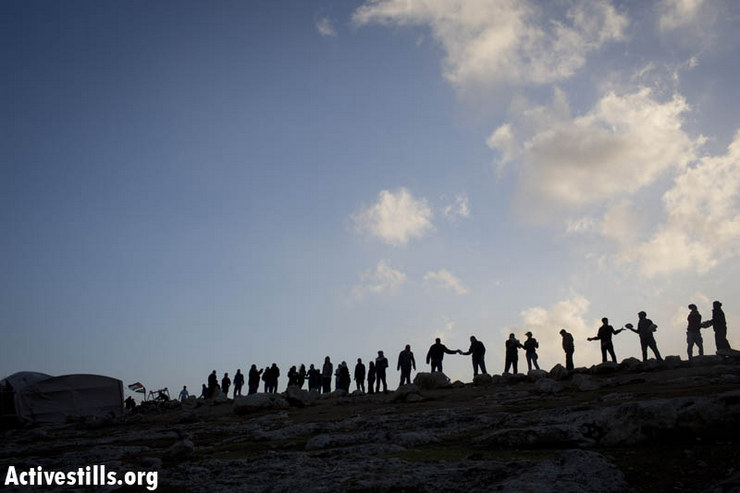 Activists continue to build new structures in the camp. 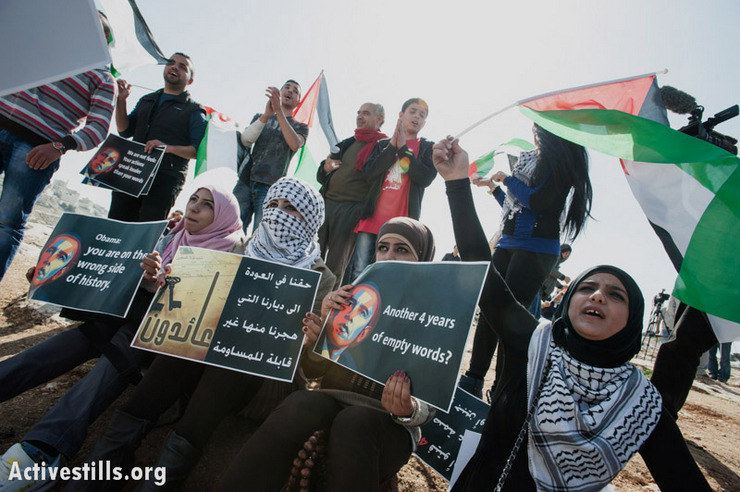 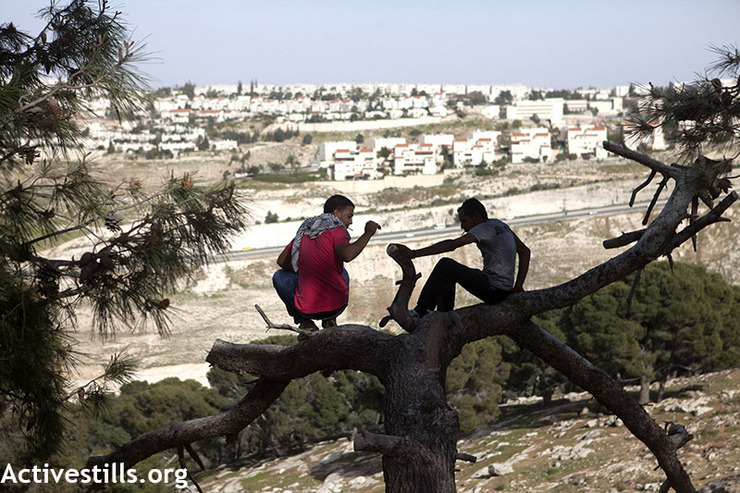 With the Israeli settlement Maale Adumim visible across the valley, children play in trees near the Ahfad Younis camp. 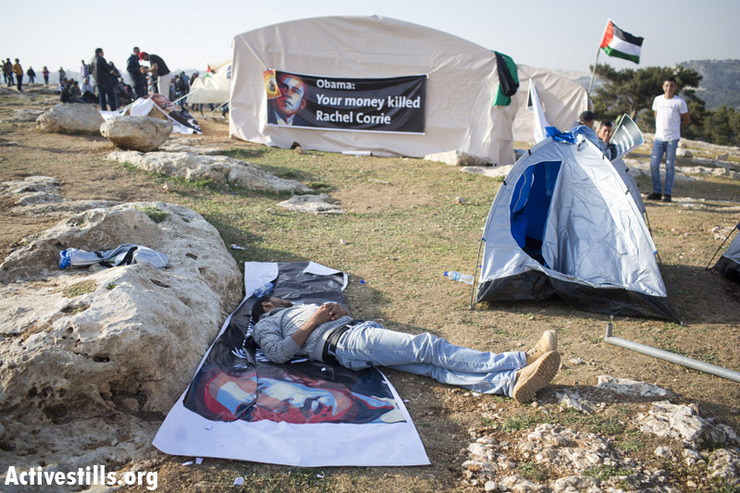 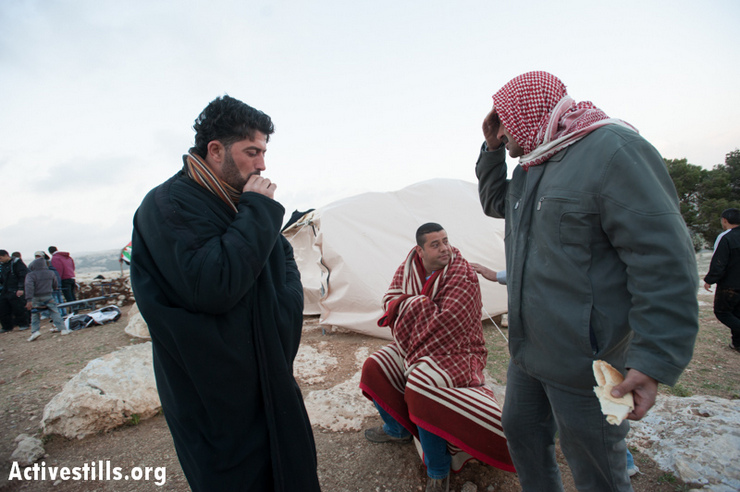 Palestinian activists bundle to keep warm while maintaining their presence in the protest camp. 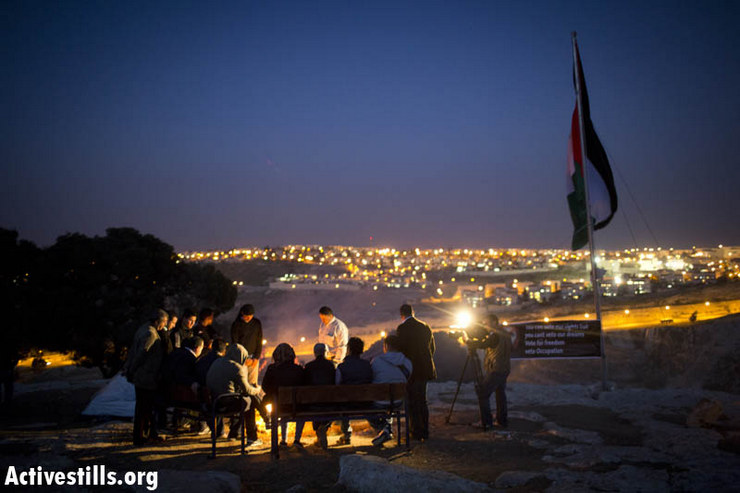 With the lights of the Israeli settlement Maale Adumim visible on a nearby ridge, activists gather around campfire. 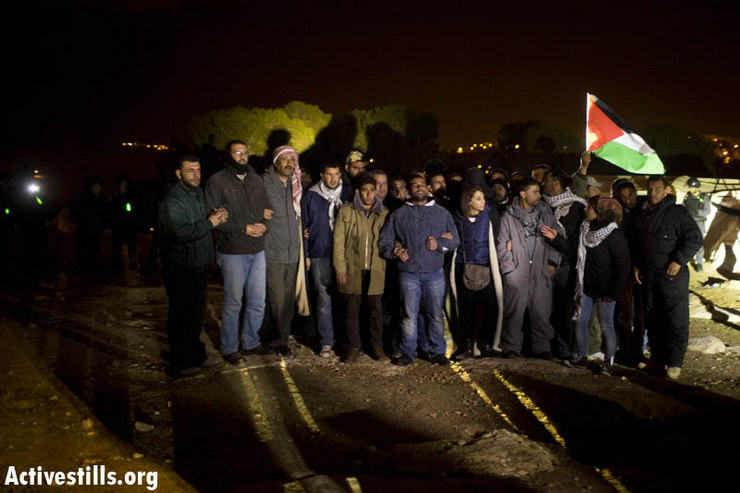 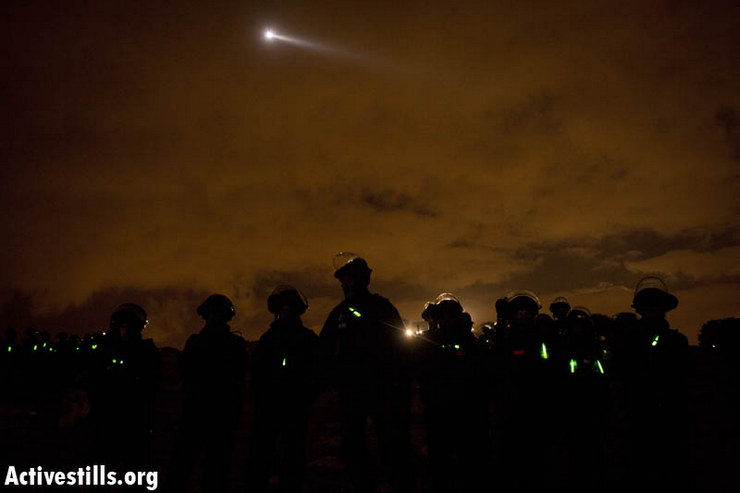 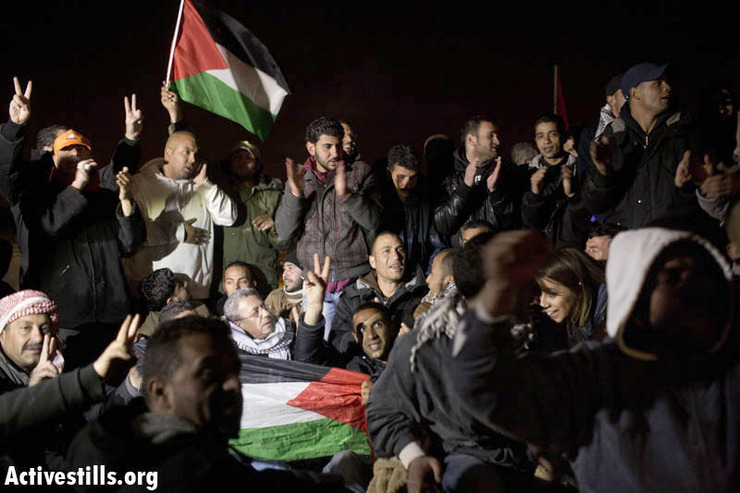 Activists chant and sing as they anticipate being forcibly evicted. 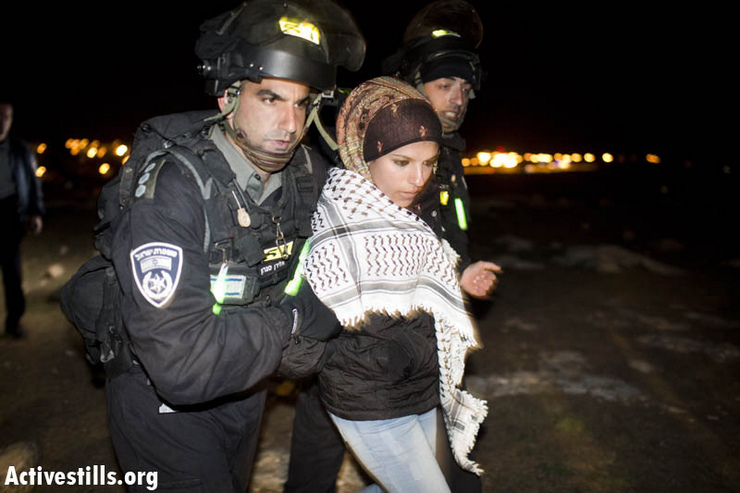 Israeli forces arrest an activist as the camp is forcibly evicted. 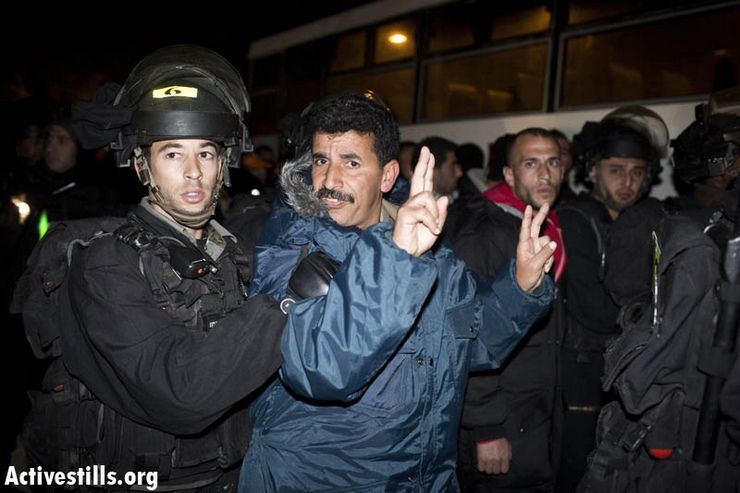 An activist flashes a “V” for victory as he and other residents are loaded onto buses and detained. They were later released near Ramallah.

Related:
Obama’s speech: Israel’s Left and Right can be happy, and the occupation is here to stay
Obama compares Israeli occupation to racial discrimination in U.S.
An open letter to Barack Obama: You are welcome in Bethlehem
Obama’s speech: The view from the crowd