Two independent journalists were among the Israeli demonstrators arrested in Hebron, during a protest to mark 22 years since the Ibrahimi Mosque Massacre. 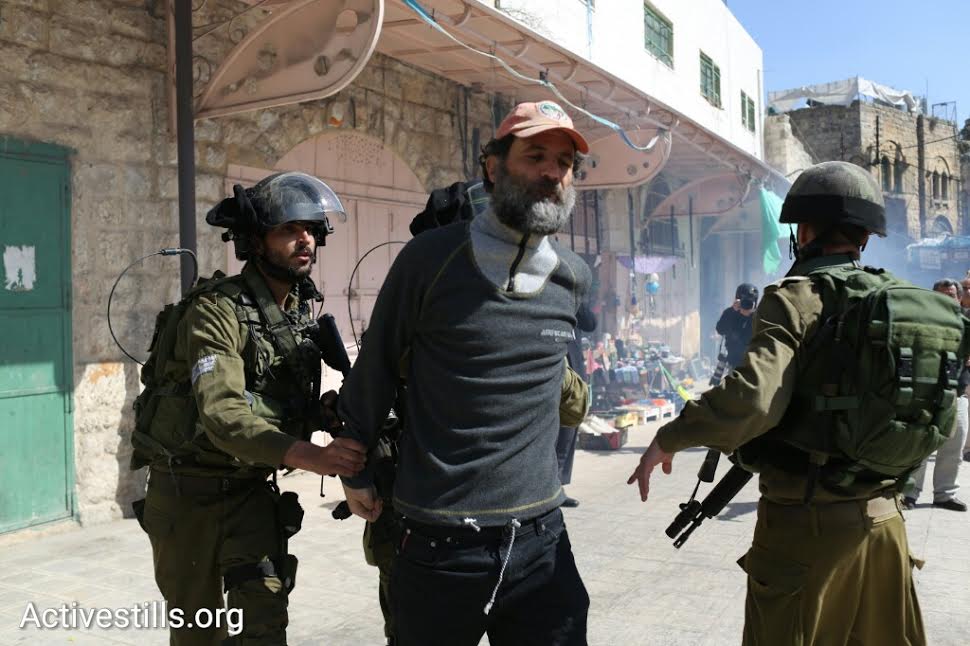 Police arrested 12 Israeli activists on Saturday afternoon during a protest in Hebron marking 22 years since the Ibrahimi Mosque Massacre.

According to the police, the arrests took place after the Israelis entered H1, the area of Hebron under the control of the Palestinian Authority, where Israelis cannot legally enter. Among those arrested were two independent Israeli journalists, working for Israel Social TV and the Alternative Information Center, respectively. Four of the activists were held at a local police station for several hours, but all of them were eventually released. 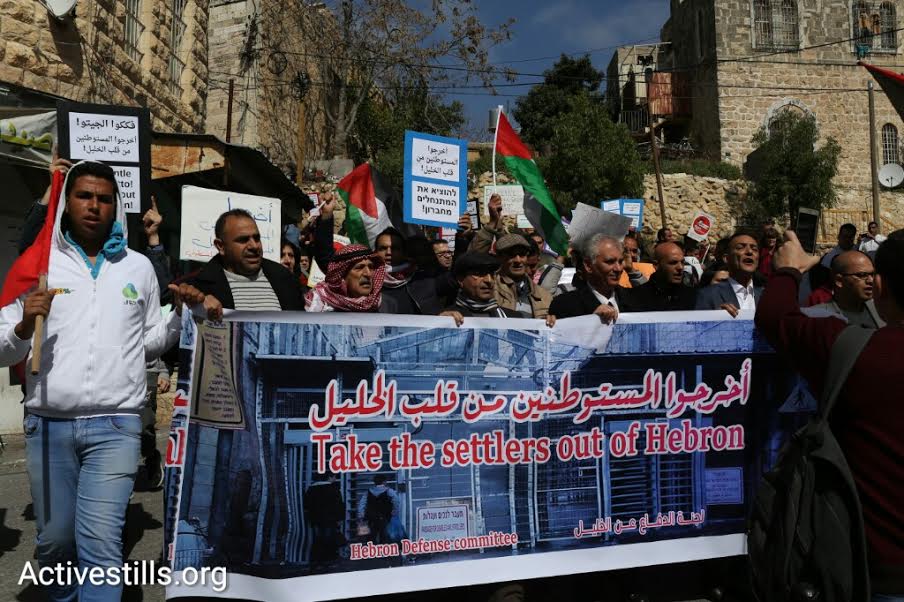 Palestinian members of the Hebron Defense Committee protest in central Hebron, calling on Israeli authorities to open Shuhada Street, which has been off limits to Palestinians since the Second Intifada. (photo: Oren Ziv/Activestills.org)

One Palestinian journalist was wounded by a stun grenade, and received medical attention at the scene.

The demonstration was organized by the left-wing, Hebron-based Hebron Defense Committee, to commemorate 22 years since Baruch Goldstein massacred dozens of Muslim worshippers at the Ibrahimi Mosque, as well as to call to free Palestinian journalist Muhammad Al-Qiq, who has been on hunger strike to protest his administrative detention for 89 days. Members of Tarabut – Hithabrut, a left-wing movement based in Israel, also participated. 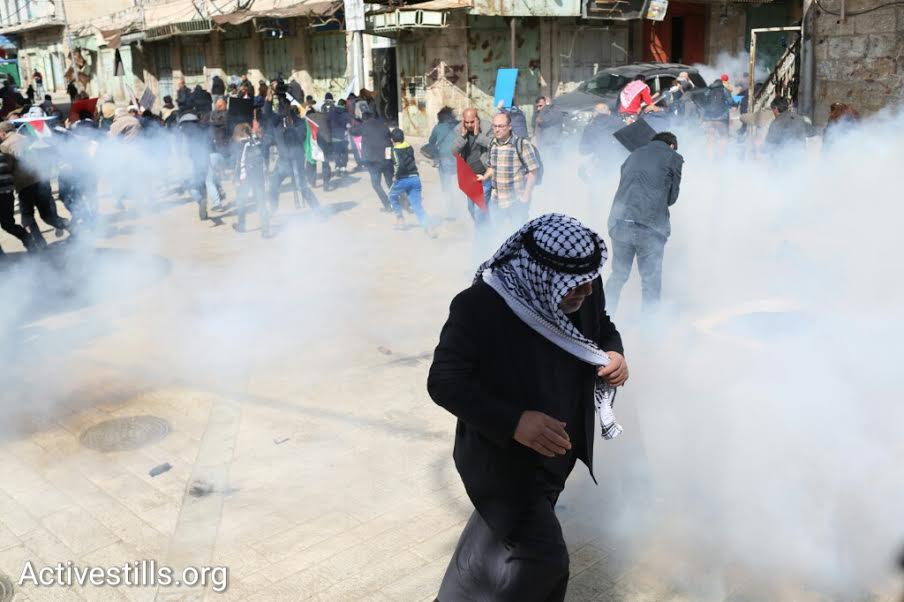 The activists marched nonviolently toward one of the checkpoints on Shuhada Street — one of the main avenues that has been closed off to Palestinian movement since the Second Intifada — while hanging Palestinian flags on fences and calling to “open the Hebron ghetto.” 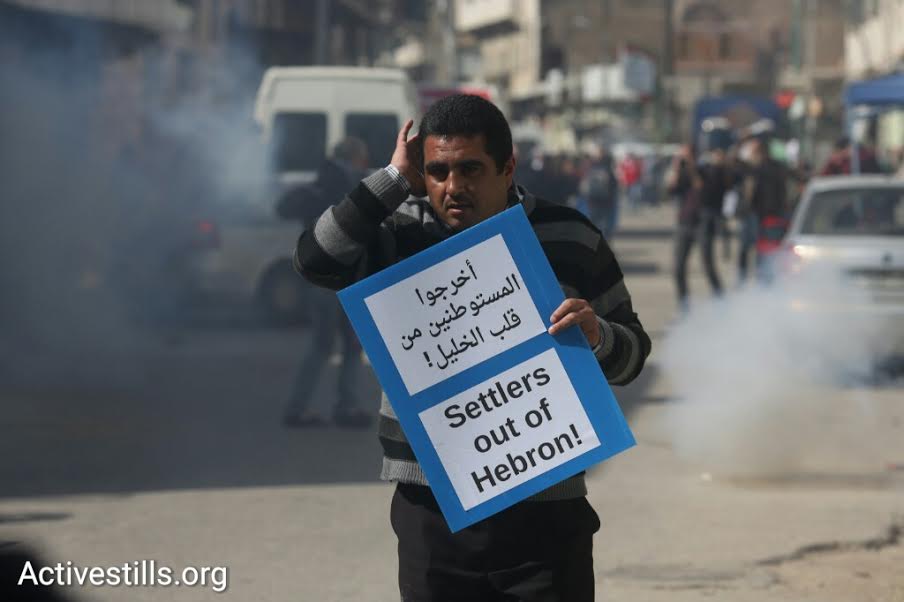 Hisham Sharbati, a member of the Hebron Defense Committee, told +972 that “22 years after the massacre at the Ibrahimi Tomb, the situation in Hebron has become much more difficult. The army places restrictions on Palestinian movement, while Israelis can move freely and enjoy all their rights.” 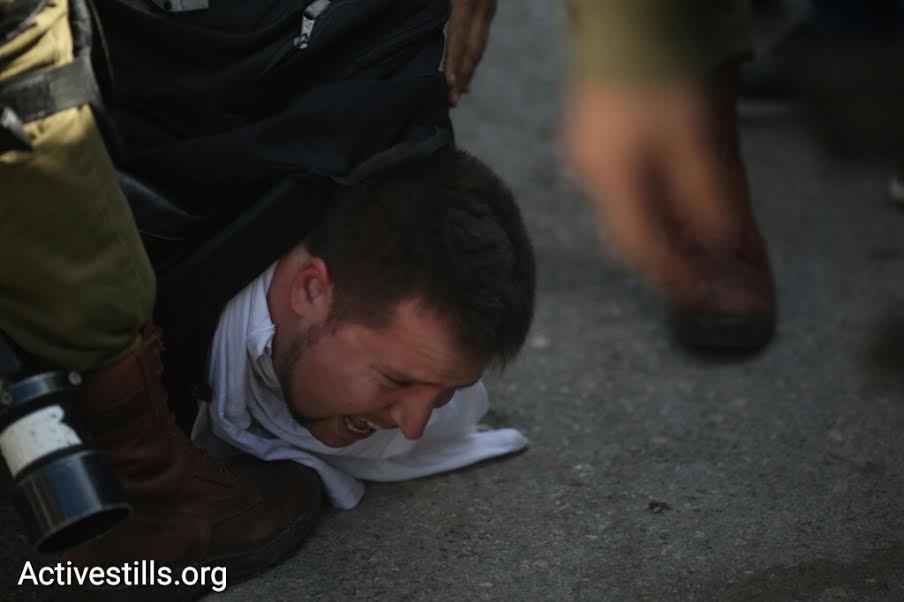 Israeli soldiers pin down and arrest an Israeli activist during a demonstration in central Hebron, February 20, 2016. (photo: Oren Ziv/Activestills.org)

“The political situation can be solved,” he adds, “only if the army and all the settlers, until the very last one, leave the city.”

Among the Israelis arrested were Professor Gadi Algazi, one of the leaders of Tarabut – Hithabrut, who spoke to the soldiers at the beginning of the protest, telling them that the Israeli activists came to “stand alongside the residents of Hebron, against the occupation, and against turning Hebron into a ghetto.” Moments after finishing his remarks, the security forces began shooting tear gas and stun grenades at the demonstrators, while making arrests. 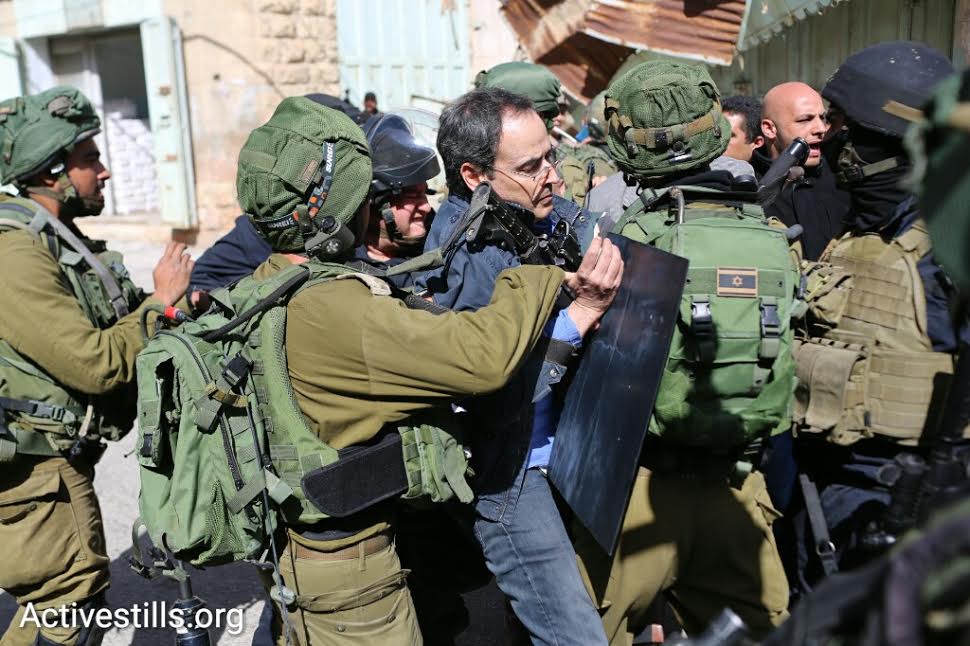 Following the massacre at the Ibrahim Mosque in 1994, the Israeli army began enforcing a regime of separation in central Hebron. Central roads, such as Shuhada Street, were closed off to Palestinian vehicles, and 1,800 Palestinian stores were forcibly shut down. Over a thousand families have left the area. Today only 250 Palestinian families live on Shuhada Street, which remains off limits to civilian and commercial vehicles.