In honor of International Women’s Day, Activestills pays tribute to more than a quarter century of anti-occupation activism by the ‘Women in Black’ group in Israel. Every Friday since 1988, the women have stood in the main squares of cities or at highway junctions with signs calling to end the Israeli occupation. Often spat at, cursed or violently harassed by passersby, they have become, for us, a symbol of persistence. 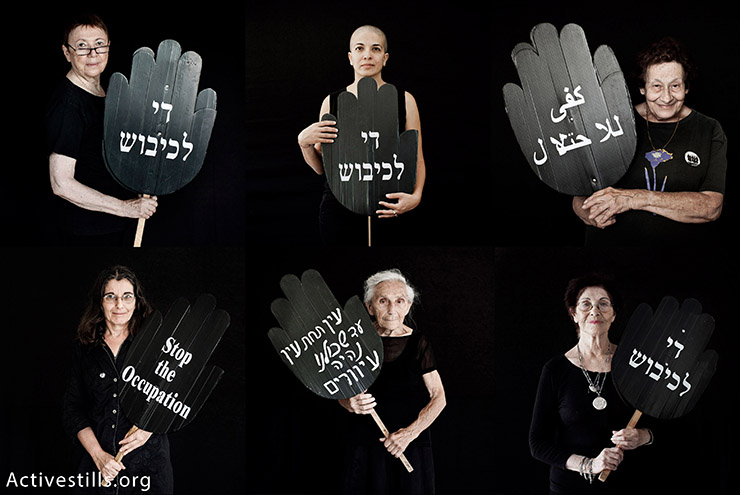 Dafna Kaminer: It was the time of the First Intifada, and we wanted to support the Palestinian struggle. So we decided that we would stand out there with signs calling to end the occupation. It was the simplest and most visual thing we could do. 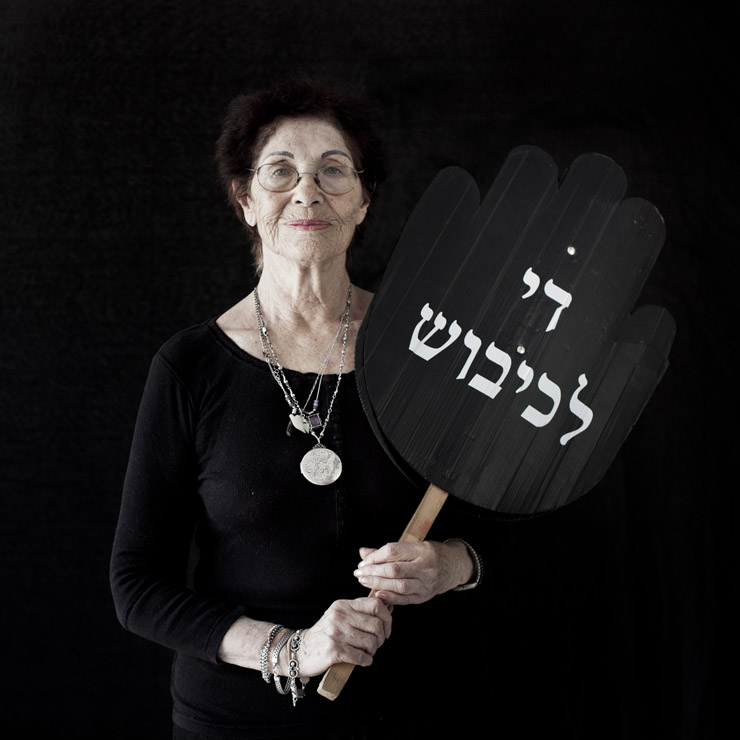 Edna Glukman, 83, of the Tel Aviv group and co-founder of Women In Black holds a sign that reads ‘stop the occupation’ in Hebrew.

Edna Glukman: In the beginning, the right-wing protesters started to attack us during the vigils. We sewed big black banners and with small white letters we wrote slogans against the occupation, as well as for justice, peace and women. By the time we began writing the word “women” on our banners, it was already starting to become a women’s movement.

Tamar Huffman: You could say we are handful of women with a lot of opinions; it is definitely a feminist group. If we had a man on the board, he would probably be the one making decisions. 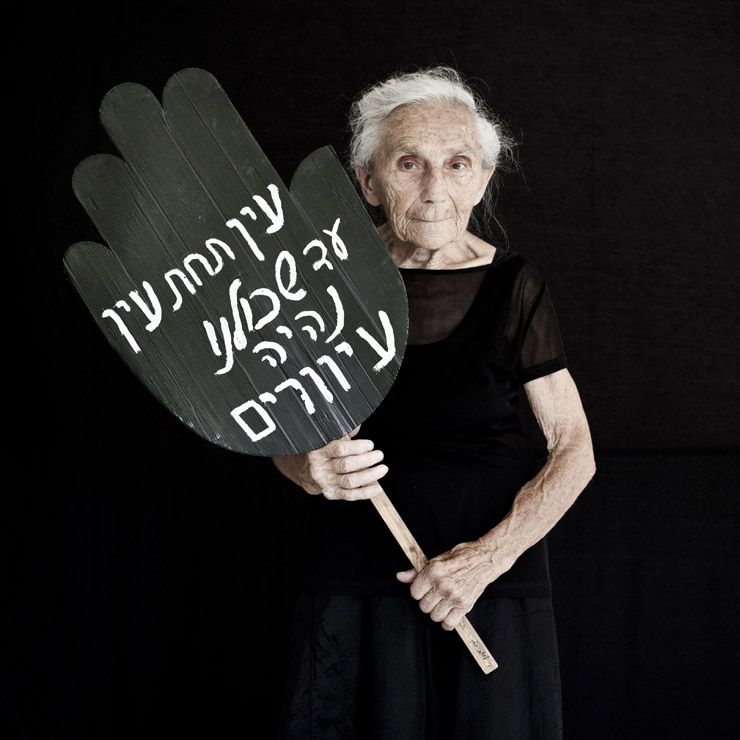 Stela Tzur, 86, co-founder of Women In Black and part of the Haifa group holds a sign that reads ‘an eye for an eye until all go blind’ in Hebrew. 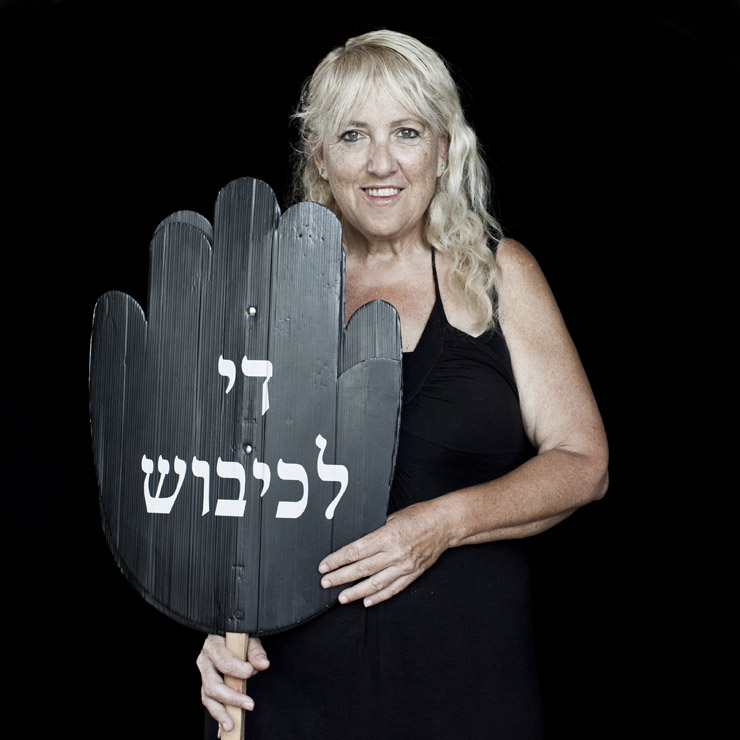 Tamar Huffman, 58, Tel Aviv group, active for four years in Women In Black holds a sign that reads ‘stop the occupation’ in Hebrew.

Tamar Lehan: I didn’t join for feminist reasons, but rather for the persistent and clear statement of the group. However, I think that it is very logical that it is a women’s group, since women are accustomed to doing hard work for long periods of time without seeking immediate results.

Dafna Kaminer: In times of unrest, we expect more verbal and sometimes physical violence. People curse at us as if we were the ones responsible for the situation, and not Israel’s policy makers. When things are more calm, people just walk by and say nothing. Like we are transparent or nonexistent. 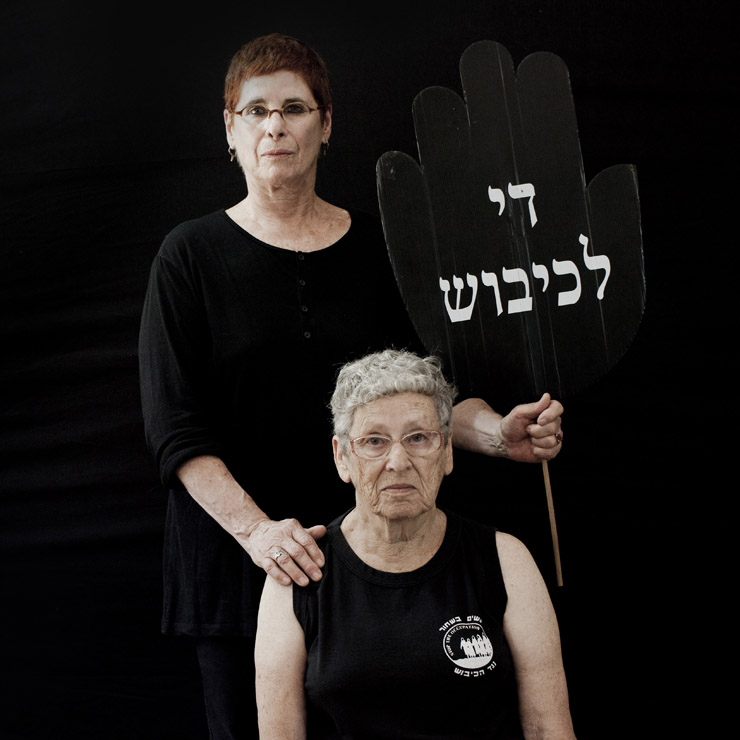 Dafna Kaminer (sitting), co-founder of Women In Black and Tamar Leahn, 71, active for 20 years in Women In Black, from the Jerusalem group. 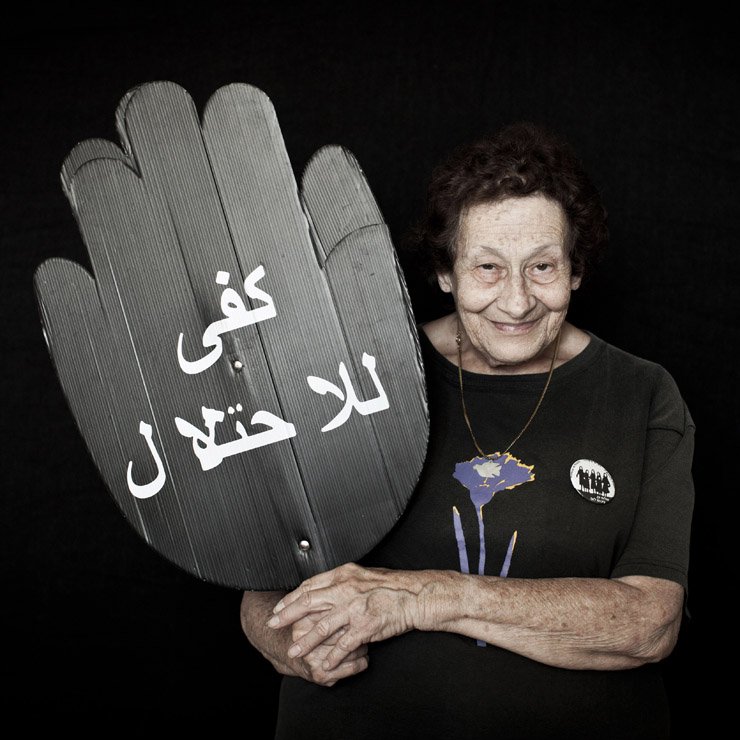 Aliya Strauss, 78, active for 24 years in Women In Black and is part of the Tel Aviv group, holds a sign reading ‘stop the occupation’ in Arabic.

Aliya Strauss: People approach us and cynically ask “What occupation are you talking about?” But there are also young people who come to ask the same question in all seriousness, since they simply learn nothing about it. In the first few years, many women stood at dozens of junctions – Jewish and Arab women together. Today we are far fewer. It is truly difficult to come every week, to dedicate a day for this cause. We are the ones that continued to do so. People on the street should know that we think there should be a solution.

Dalya Segal: In 1967  my husband came back from the war cheering. I went with him to see the Western Wall that I knew from my childhood. I saw the ruined houses all around. It wasn’t the narrow alley that I used to walk in. Then I started asking myself, what are they planning here? Why are they expelling people from their homes? When I came to join the vigil, the women there asked me why I wanted to join.  I answered simply, “I came to stand with you.” It was so natural, like I was there all my life. 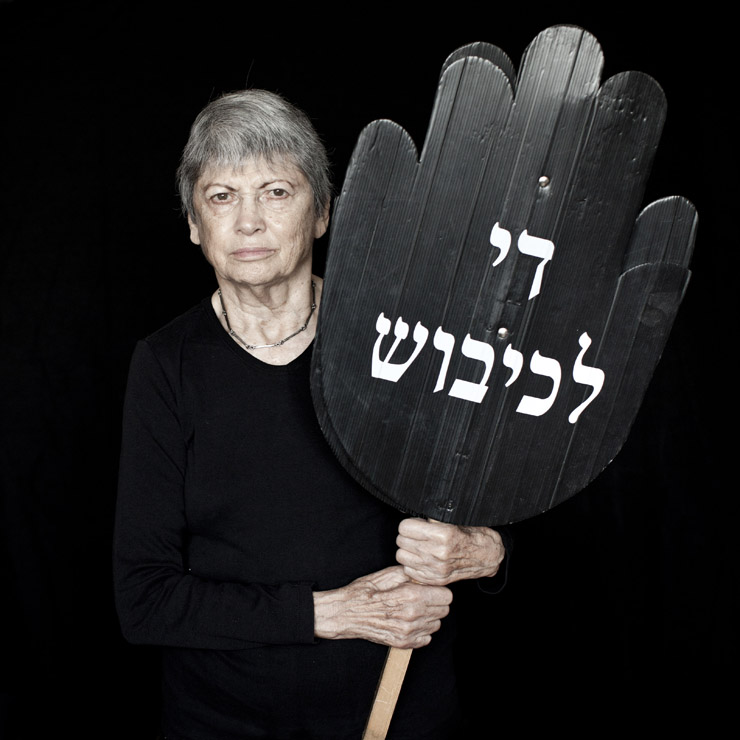 Dalya Segal, 79, active for 8 years in Women In Black, and part of the Tel Aviv group, holds a sign reading ‘stop the occupation’ in Hebrew.

Ruthi Geler: We took the black color code from Mayo Mothers‘ in Argentina and Chile, as part of a worldwide political movement against violence, occupation, discrimination and racism. In the historical context it makes sense – it should be thought of as one cause.

Edna Zaretzki Toledano: Our state should be a state for all its citizens, while at the same time it should open the door for refugees from around the world. That’s how I see our humanity. Unfortunately, we are going through a process of de-humanization. As part of the second generation of Holocaust survivors, it is very hard for me to see. 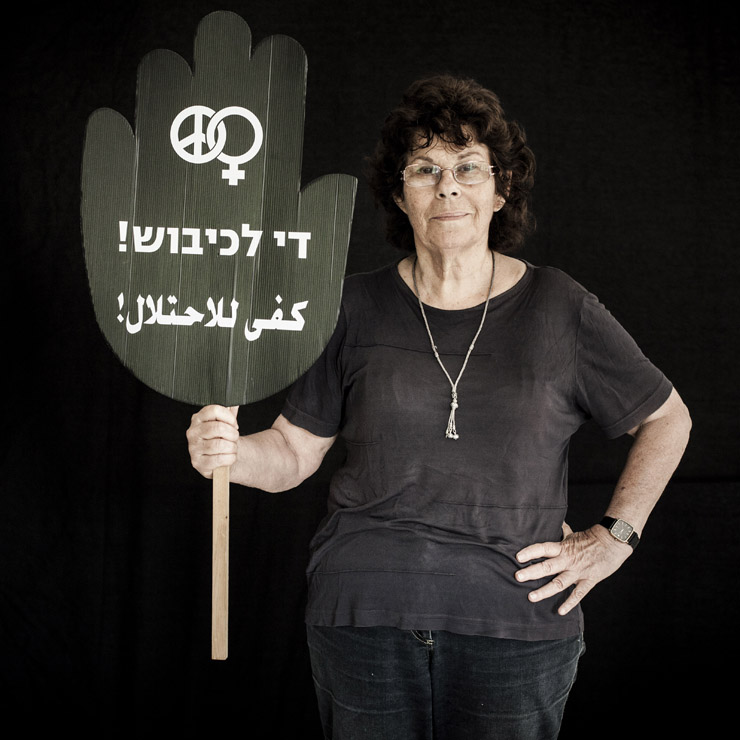 Edna Zaretzki Toledano, 72, co-founder of Women In Black, Haifa Group, holds a sign that reads ‘stop the occupation’ in both Hebrew and Arabic. 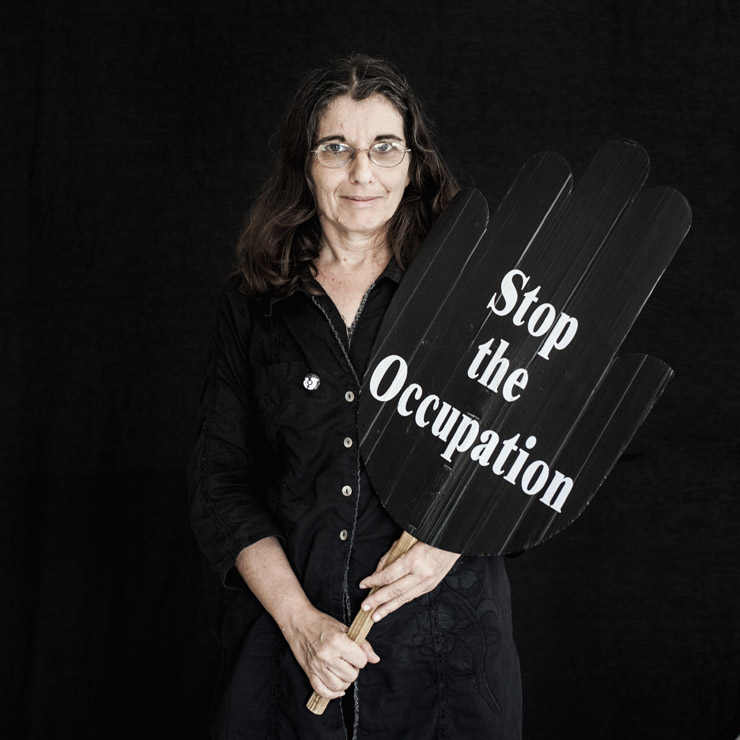 Orly Nathan: Unfortunately, we are diminishing in numbers and also getting old. I think that perhaps Jewish women today consider our vigils too passive. But that is not true. Standing in a public space at noon, on the busiest day of the week, in the middle of the town – that is not a passive act. Our goal is to make the occupation present. To make people realize that the occupation is wrong. 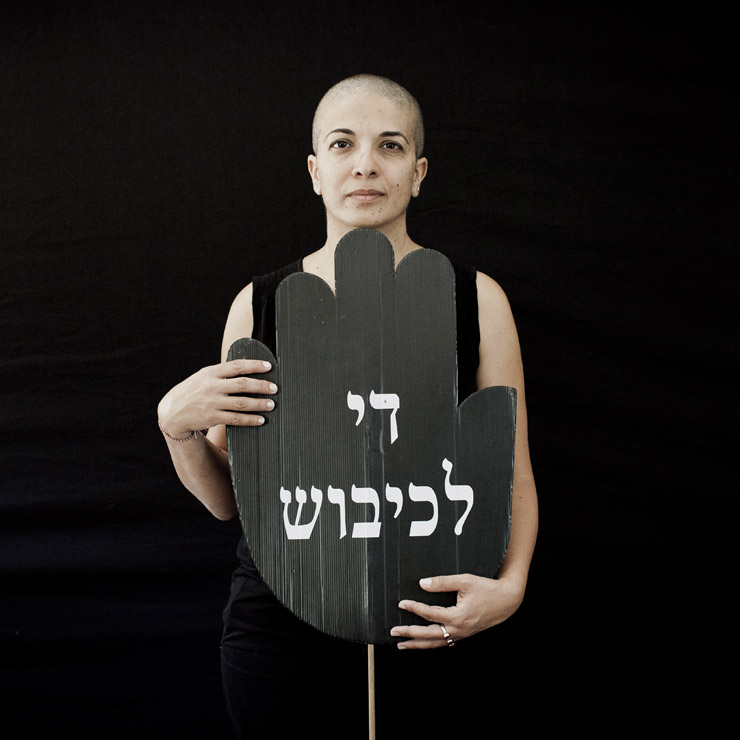 Vered Madar, 44, active for 11 years in Women In Black as part of the Jerusalem group, holds a sign reading ‘stop the occupation’ in Hebrew.

Vered Madar: As far as I remember, I have always had a passion to change the world. Women In Black is one way for me. For years I saw them standing in Haifa and felt alienated. Most of them are older than me, and also I was very busy with Mizrahi activism. At some point I felt comfortable enough to join as a guest. After a while, I felt more at home and decided to stay. When my son, Roi, was born, I started seeing things through his eyes. During one of the vigils, a woman was waving the Israeli flag at us. Roi asked if she is angry at us, and I told him that I think both of us are trying to do the best we can for this place. The right wing has appropriated what people call “love for Israel,” and the Zionist narrative portrays power over the Palestinian people as essential. It is not.

Judy Blanc: I am very proud of my grandson, Natan (conscious objector Natan Blanc). I’m amazed at how many people see him as an independent, honest young man. Even people who do not agree with him politically are appreciative of his deeds. Young people nowadays are more individualistic. Only critical thinking about society and collectivity can help us bring peace. 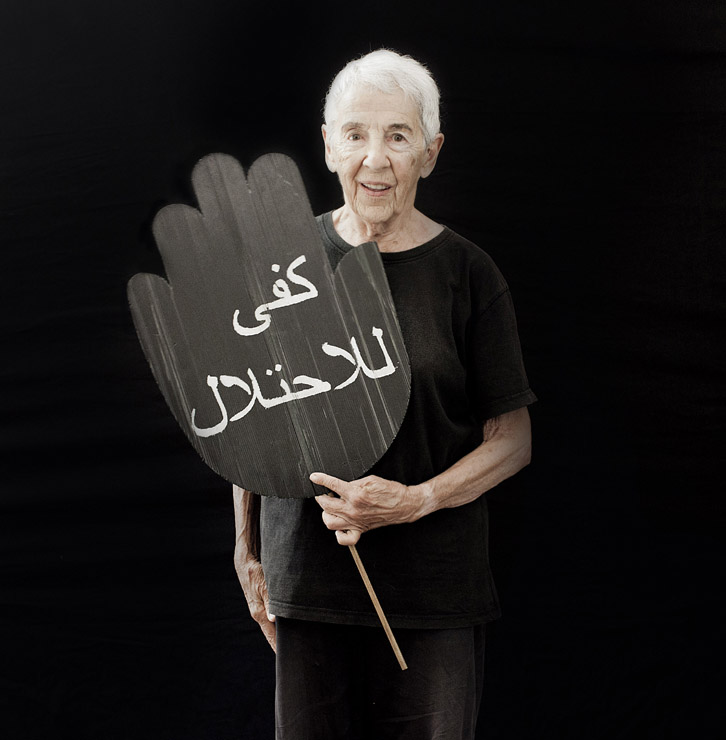 Judy Blanc, 85, co-founder of Women In Black, Jerusalem group, holds a sign that reads ‘stop the occupation’ in Arabic. 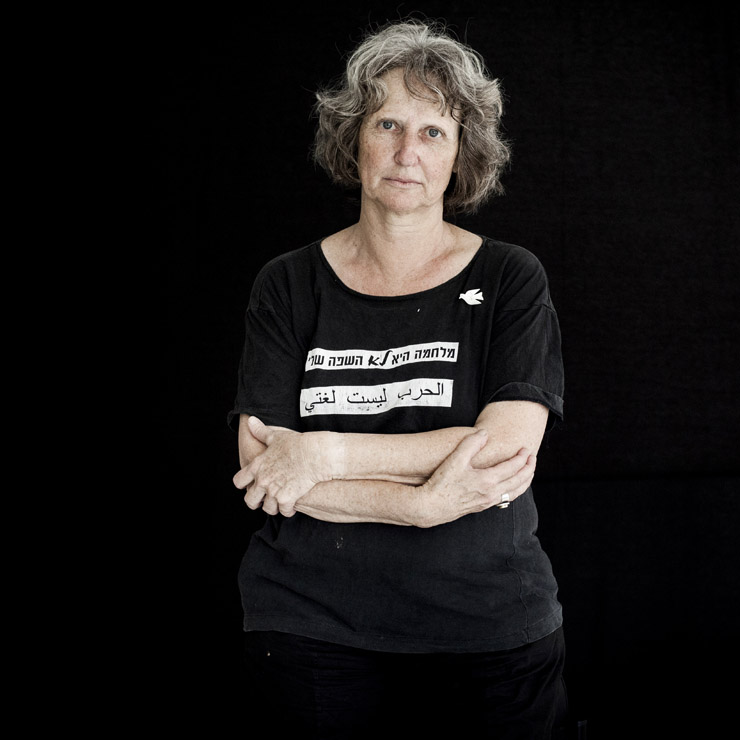 Varda Sivan, 62, active for 20 years in Women In Black, Haifa group, wears a shirt with the slogan “War is not my language” in Hebrew and Arabic. 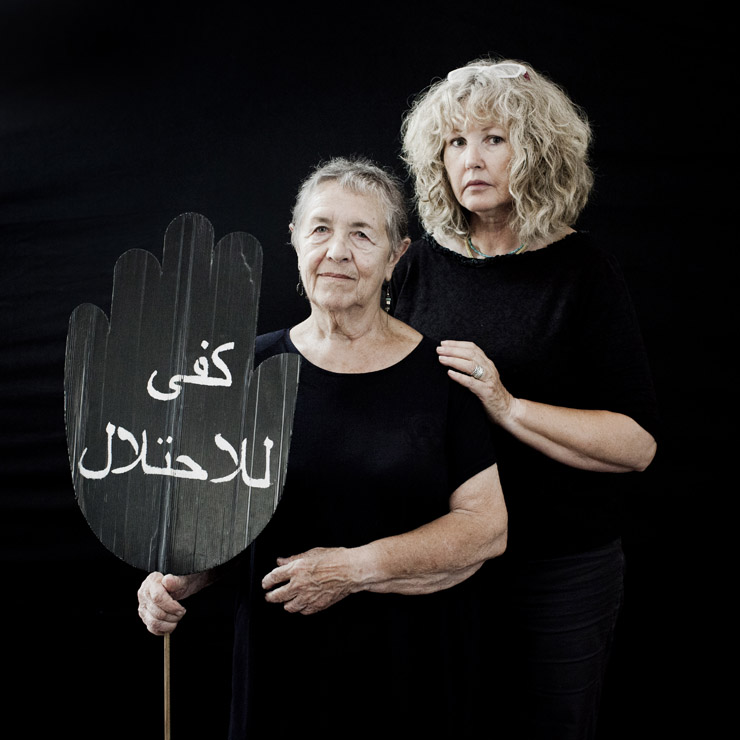 Yaffa Berlovitz Bloch: This persistence and continuity gives me the feeling that this is not “special.” This is our life. The occupation still exists, nothing changes. This sign, which screams “stop the occupation,” – we will continue to carry it even if nobody listens.

Edna Glukman:  I have been participating in activism for 60 years, and I don’t think we have achieved much. On the other hand we did, we have made some progress. I wouldn’t change a thing – if I was young I would to it all over again. 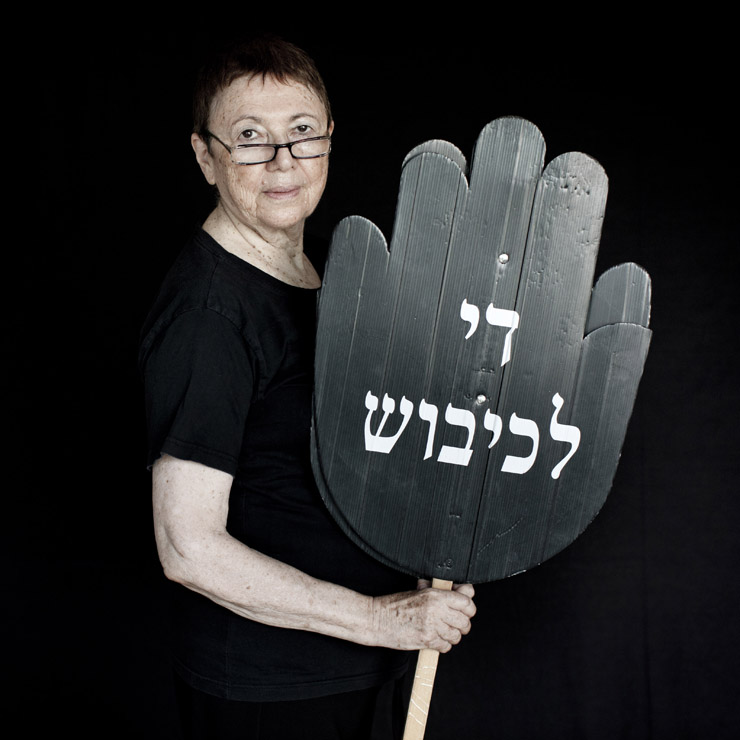