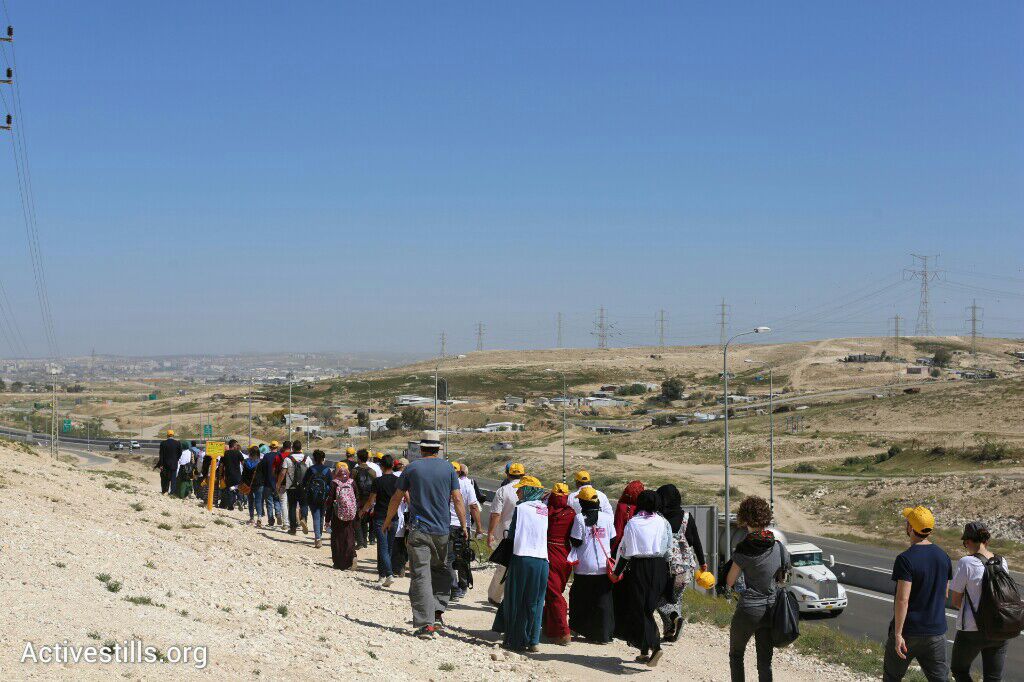 Dozens of members of the Joint List — including chairman Ayman Odeh, Dov Khenin and other future members of Knesset — marched alongside other Arab leaders Thursday on a four-day trip through the Negev/Naqab’s unrecognized Bedouin villages. They were joined by representatives of the Arab Higher Monitoring Committee and the Regional Council of Unrecognized Villages. The march is set to end at the President’s Residence in Jerusalem on Sunday.

Odeh, who opened the march in the unrecognized village of Wadi Al-Na’am, just south of Be’er Sheva, told the marchers: “Nearly 100,000 citizens live in the Negev in poor living conditions. Can you imagine your life without electricity? Without running water? Where your children have to drive kilometers, on poor roads, just to get to school?” 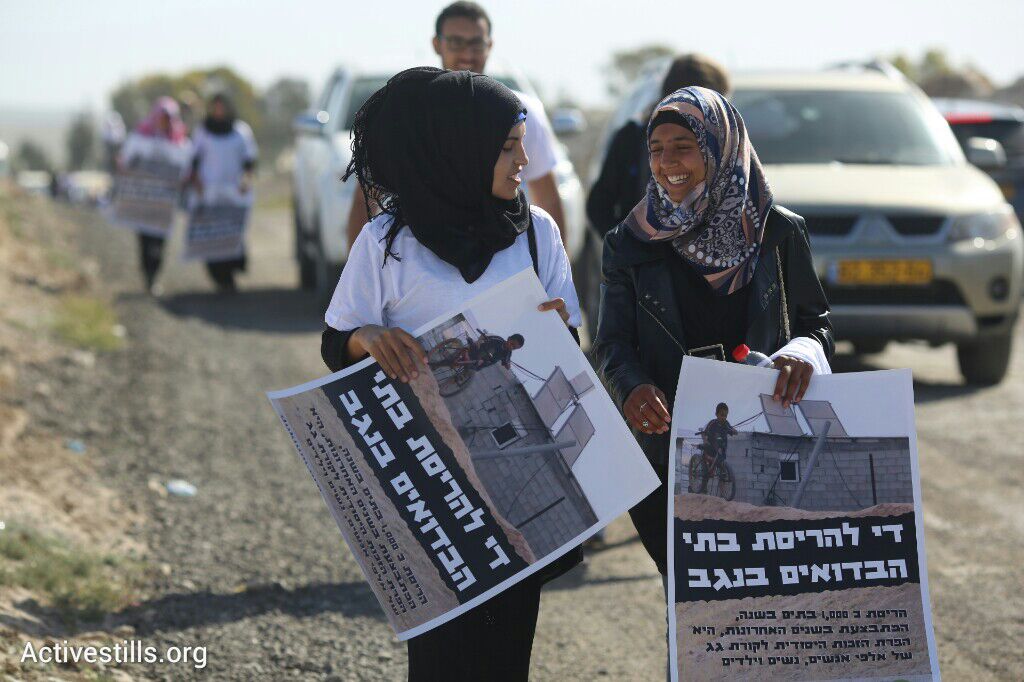 Odeh organized the march as part of his pre-election promise to support the years-long struggle of the unrecognized villages. The plan is to present President Reuven Rivlin with an operative plan for recognizing the Bedouin villages of the Negev, which will emphasize the benefits that such recognition will have on both the Jewish and Arab populations of the Negev. 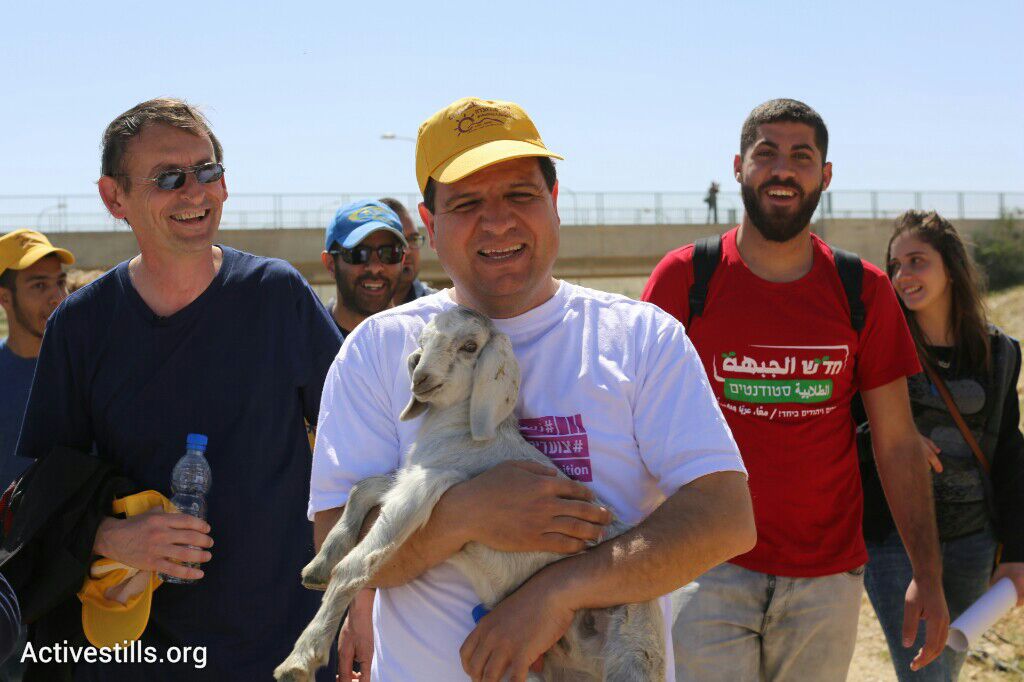 Fady Masamra, who heads the Regional Council of Unrecognized Villages, spoke to +972 at the beginning of the march: “The issue of recognizing the villages has been up in the air for too many years. This march is just the beginning of the recognition process. The 100,000 residents of the unrecognized villages have suffered enough. Children have lived without water and electricity for long enough — now it needs to stop. This is a call for everyone who believes in human rights to come march with us and join the struggle of the Negev’s indigenous people.”

Hadash MK Dov Khenin also spoke to +972, saying: “We are marching today from the place that most acutely represents the injustice and danger of the unrecognized villages. Students from Wadi Al-Na’am learn in tin shacks next door to the chemical factories of Ramat Hovev. Despite the dangers facing the villagers, we have not been able to advance a solution to their unbearable situation over the past years. Wadi Al-Na’am is just one story out of many. We cannot continue to make peace with this kind of reality. Instead of fighting the Arab Bedouin citizens, the time has come to solve their problems, and first and foremost recognize their villages. 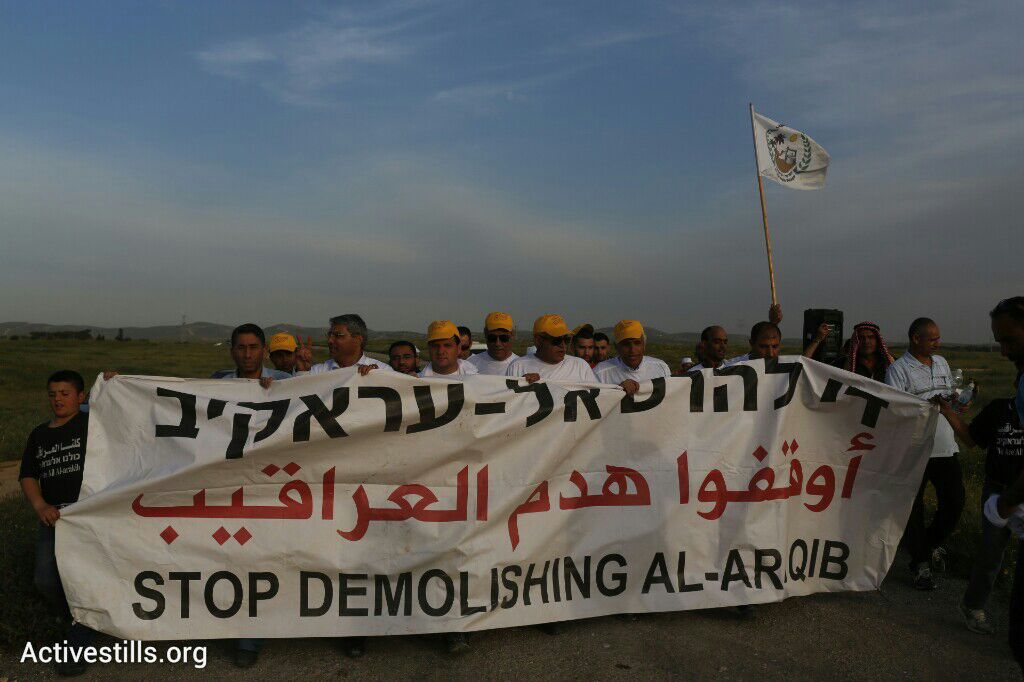 Villagers from the unrecognized village Al-Araqib march with dozens of others during a four-day march across the Negev desert, March 26, 2016. (photo: Oren Ziv/Activestills.org)

The four-day march stopped in the unrecognized village Al-Araqib, which has been destroyed by Israeli authorities over 80 times. They marchers will also stop in Beit Jubreen and Abu Ghosh before ending in Jerusalem on Sunday. 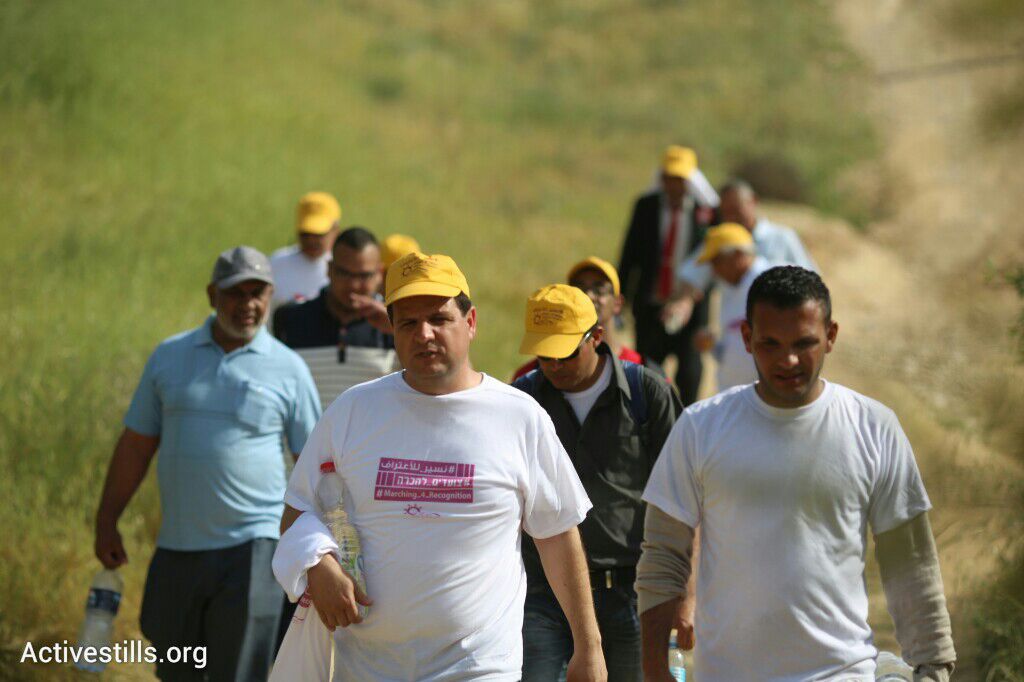 The unrecognized villages of the Negev have existed for generations, and many of them were either established before the founding of the State of Israel, or were moved to their current location by the state. The villagers live without basic infrastructure, including water and electricity, health services, roads or schools, which forces families to send their children long distances in order to exercise their basic right to education.

Related:
Negev Bedouin are now demolishing their own homes out of despair
How many cars does it take for a Bedouin village to vote?
Israel’s Bedouin: Civilians in death alone