‘We are here to protest those who were a part of the incitement that led to the death at the pride parade in Jerusalem,’ says one participant. 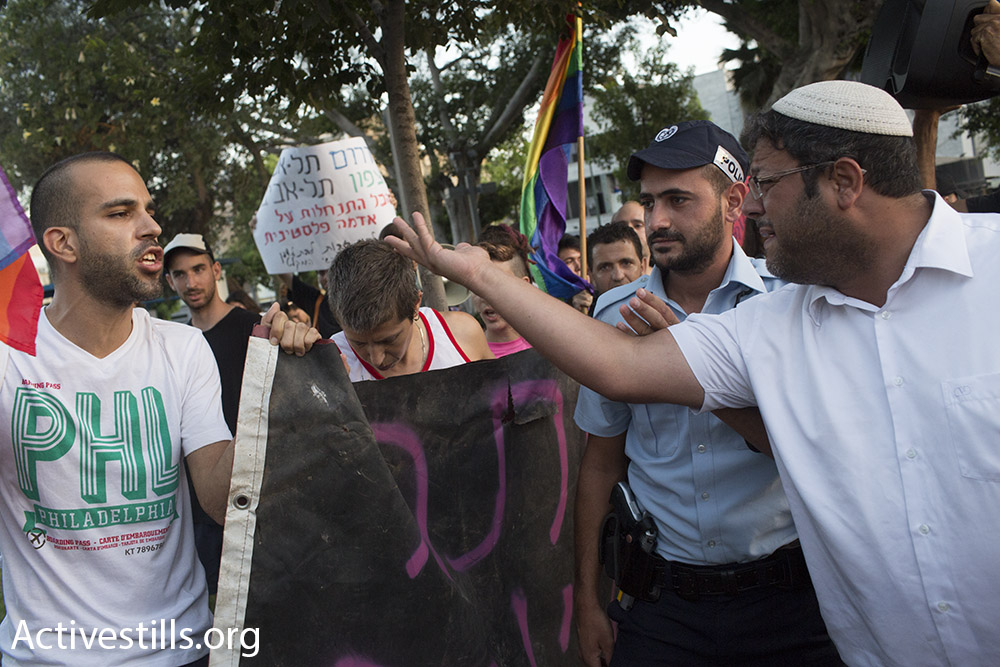 Some 50 LGBT activists confronted a right-wing protest in south Tel Aviv where leaders called to condemn the “dictatorship of the High Court,” for a recent decision that may soon allow the release of African asylum seekers from detention. The protest involved some 30 right wing activists and residents of south Tel Aviv who gathered Wednesday night in Levinsky park, a working class area home to many African asylum seekers.

The right-wing activists were taken aback by the LGBT protestors—who hoisted LGBT flags and signs with slogans such as, “homophobia — racism. It’s the same violence,” and were deterred for a few minutes before returning to their plans to march. 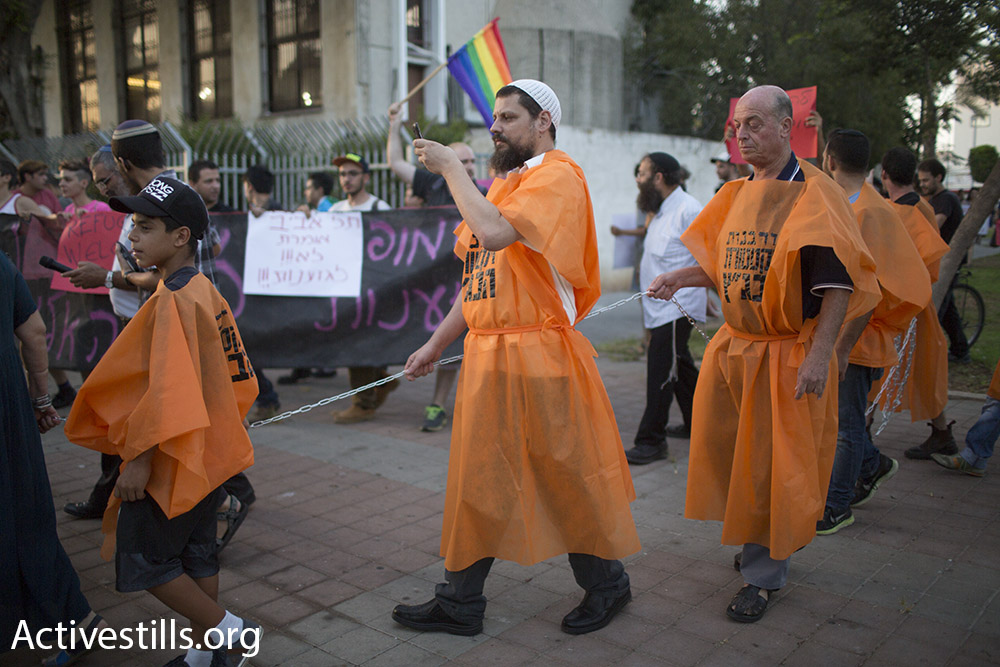 The right-wing protesters had gathered under the leadership of a number of high profile, far-right figures, including Michael Ben-Ari, Baruch Marzel, Itamar Ben Gvir, and May Golan, who criticized the recent High Court ruling that limits the detention of African asylum seekers in the Holot detention center to up to one year. Israel is expected to release more than 1,000 asylum seekers from the center in the upcoming week.

As they marched, the group cried out slogans such as “traitorous left-wingers,” “Go to Syria,” and “take the refugees to north Tel Aviv.”

“We arrived here to protest that extremist right wingers, those who also protested at the gay pride parade and were a part of the incitement that contributed to the death of Shira Banki at the pride parade in Jerusalem,” said one participant from the “pride in solidarity” organization that arranged the counter protest.

“We will go to every place that the Kahanist…racists and homophobes will go,” she said. 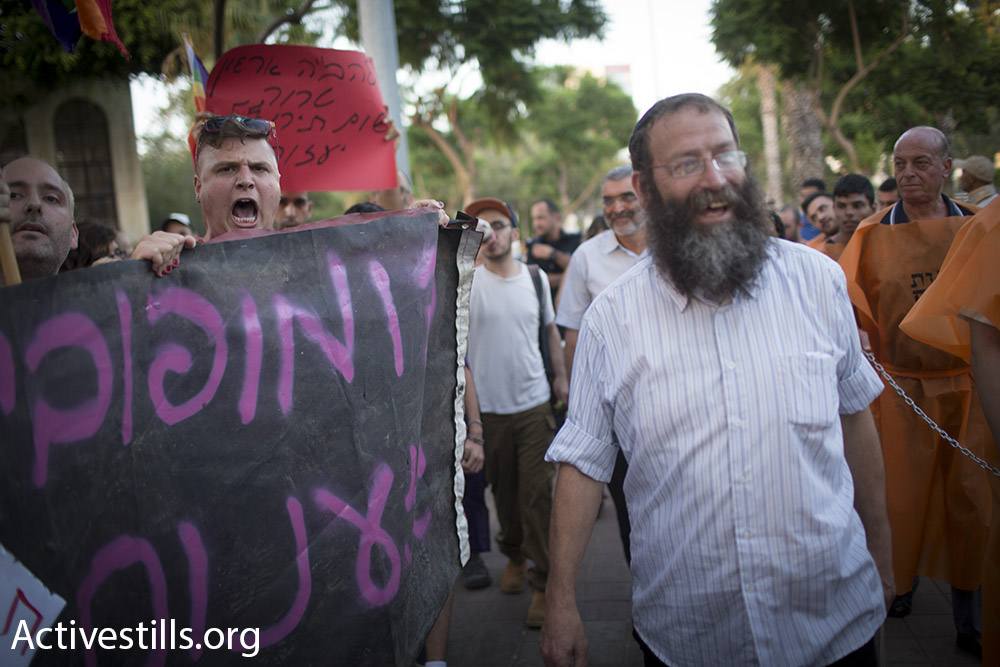 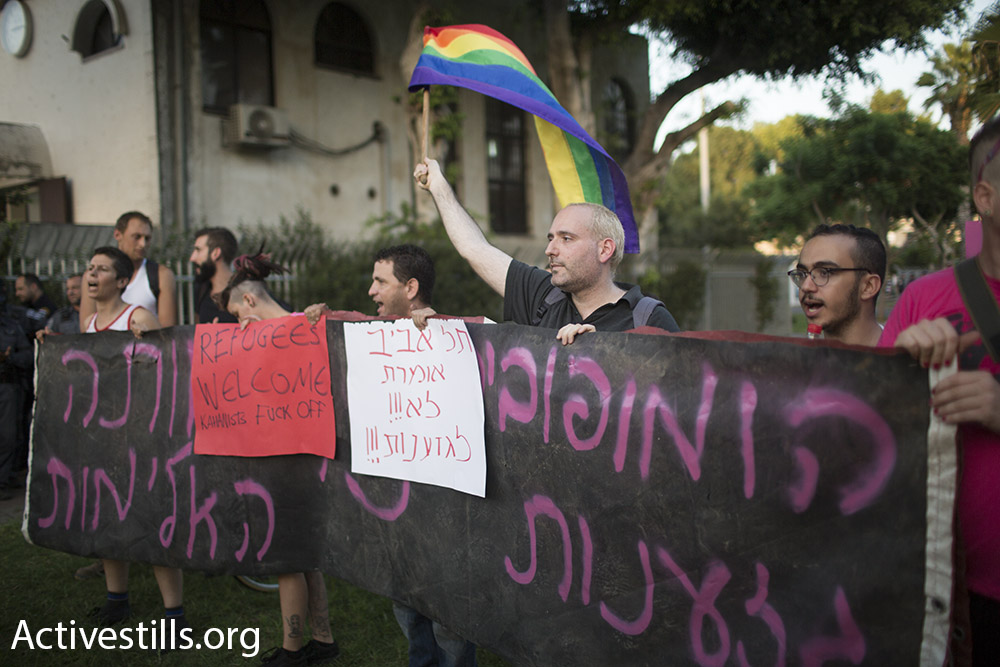 Another protestor waving a pride flag approached Michael Ben Ari and Baruch Marzel, who in the last elections ran on the “Jewish power” list that did not make it into the Knesset.

“If you represent Israel, why didn’t you have enough votes to enter the Knesset?” the protestor cried.