This week: A bystander’s funeral, a settlement is born in Hebron, a Passover for past and present strangers in the land, remains from a house demolition, love wins in the Palestine Marathon, remembering a massacre, petitioning the Pope, and a masquerade in Al Ma’sara. 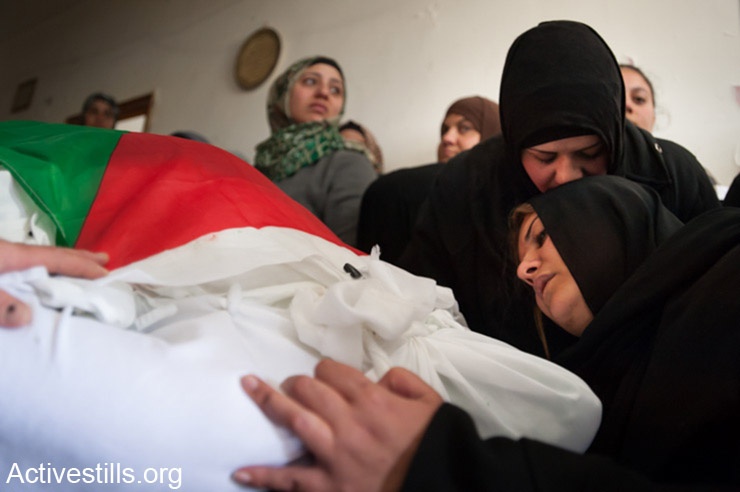 Iman Katamish (right) mourns among family members at the flag-draped body of her mother Noha, Aida Refugee Camp, West Bank, April 15, 2014. Noha Katamish, who had asthma, died from the effects of a tear gas grenade fired into her home by Israeli forces the previous day. She was the mother of one daughter. (photo: Activestills.org) 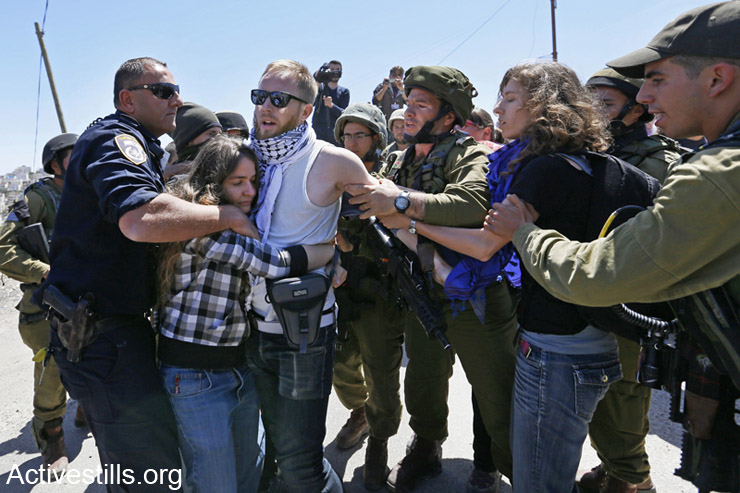 Israeli soldiers and policemen arrest activists during a demonstration in the West Bank city of Hebron against a new Israeli settlement, April 11, 2014. The protest was held against Israeli government decision to allow Israeli settlers to re-enter to the Palestinian house of the Al-Rajabi family in Hebron, from which settlers were evicted in 2008. (photo: Activestills.org) A Jewish settler family moves into the “House of Contention” settlement in the West Bank city of Hebron, April 13, 2014. Three Israeli settler families moved into a contested home in Hebron, following a years-long legal battle and culminating on Sunday with the authorization of Israeli Defense Minister Moshe Ya’alon. The new building signifies the first new settlement in Hebron since the 1980s. (photo: Activestills.org) 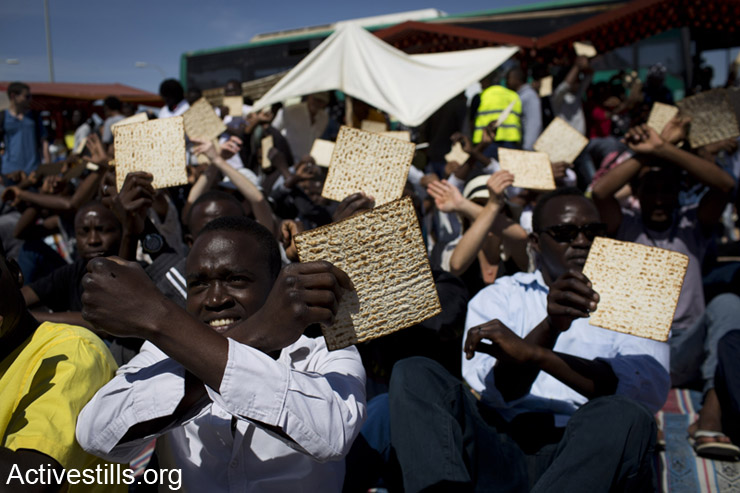 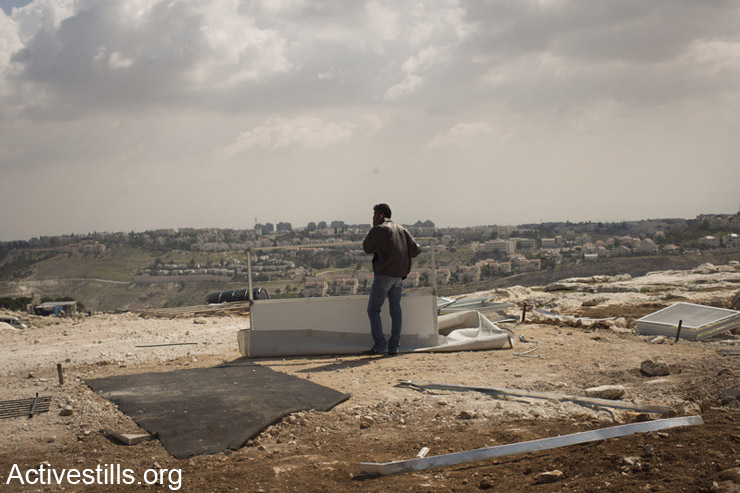 Backdropped by the Israeli settlement of Ma’ale Adumim, a Palestinian man stands near the remains of the demolished house belonging to his family in the Jabal al Baba community in the E1 area near Jerusalem. Israeli authorities demolished three houses built by the EU and issued 18 demolition orders to other houses in the area. (photo: Activestills.org) 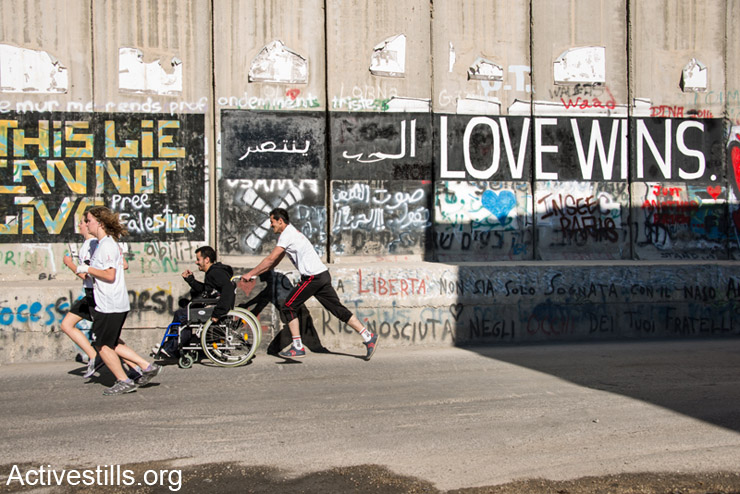 A Palestinian runner pushes a friend in a wheelchair along the Israeli separation wall dividing the West Bank town of Bethlehem during the second annual Palestine Marathon, April 11, 2014. Some 2,500 Palestinian and 700 international runners participated in 5K, 10K, half marathon and full marathon races under the title “Right to Movement”. Full marathon runners had to complete two laps of the same route, as organizers were unable to find a single course of 42 uninterrupted kilometers under Palestinian Authority control in the area. (photo: Activestills.org) 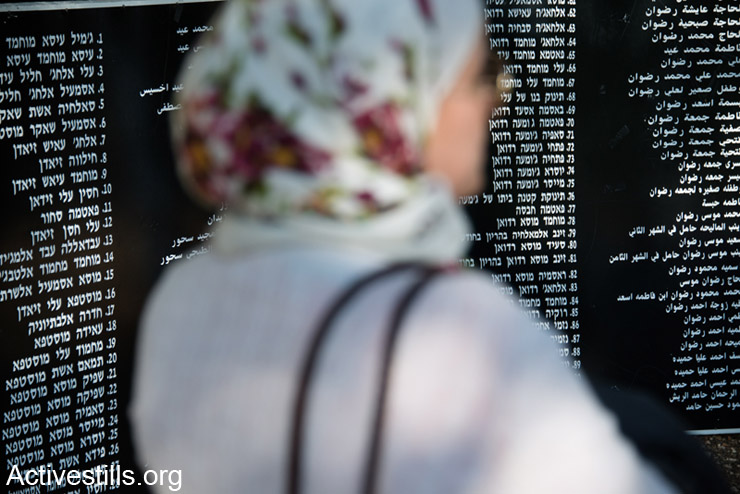 A Palestinian woman stands in front of panels bearing the names of those who died in the Deir Yassin massacre, Givat Shaul, West Jerusalem, April 10, 2014. On April 9, 1948, some 100-200 Palestinians, including women and children, were killed by the extremist Zionist militias the Irgun and Stern Gang (Lehi) in the village of Deir Yassin. The Israeli activist group Zochrot (“remembering”) organizes an annual procession to commemorate those killed and to recount the history of the village. (photo: Activestills.org) 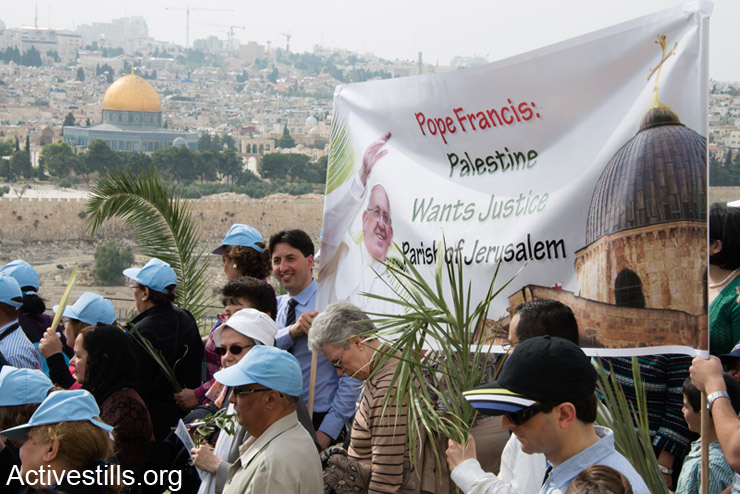 Palestinian Christians from Jerusalem carry a banner reading, “Pope Francis, Palestine Wants Justice,” in the annual Palm Sunday procession from the Mount of Olives to the Old City of Jerusalem, April 13, 2014. Palm Sunday is the Christian celebration of Jesus’ triumphal entry into Jerusalem as the “Prince of Peace” the week before his crucifixion. Though annexed by Israel in 1967, the international community considers East Jerusalem, including the Mount of Olives and the Old City, to be occupied Palestinian territory. (photo: Activestills.org) Israeli activists take part in a protest against Israeli settlements in Hebron at an event in Tel Aviv, April 12, 2014. The protest was held against the Israeli government’s decision to allow Israeli settlers to re-enter the Palestinian house of Al-Rajabi family in Hebron, from which Israeli settlers were evicted in 2008. (photo: Activestills.org) 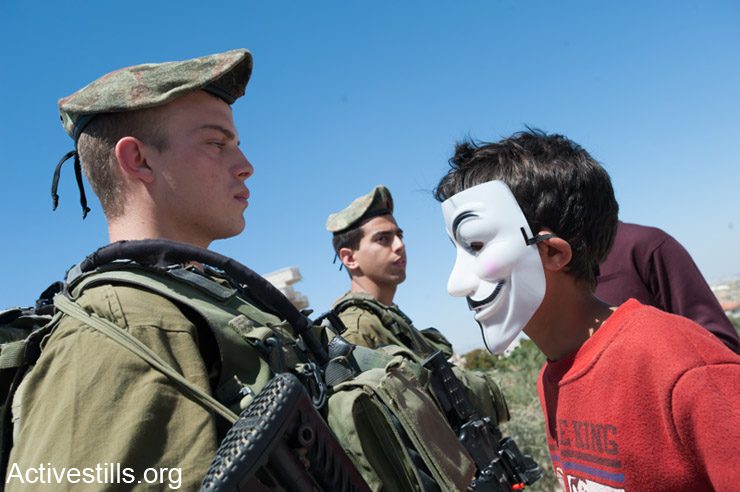 Masked Palestinian activists confront Israeli soldiers during the weekly demonstration against the Israeli separation barrier in the West Bank village of Al Ma’sara, April 11, 2014. The separation barrier would cut off the village from its agricultural lands if it is built as planned. (photo: Activestills.org) 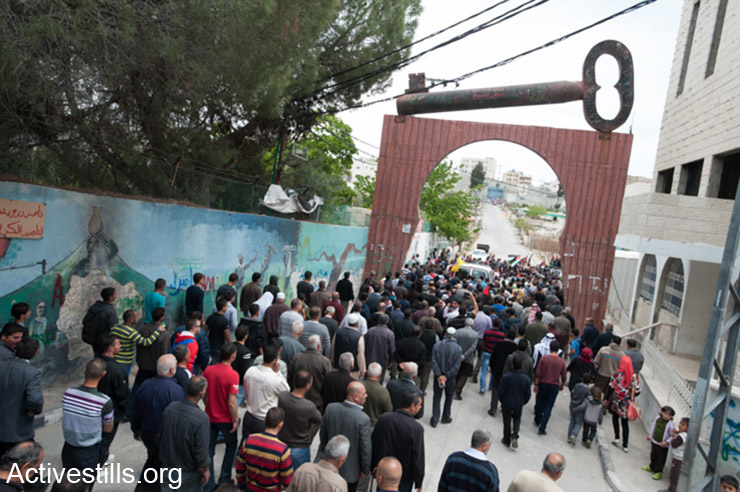 The funeral procession of Noha Katamish passes through the entrance to Aida Refugee Camp, West Bank, April 15, 2014. Noha Katamish, who had asthma, died from the effects of a tear gas grenade fired into her home by Israeli forces the previous day. (photo: Activestills.org)
Get Our Weekly Newsletter