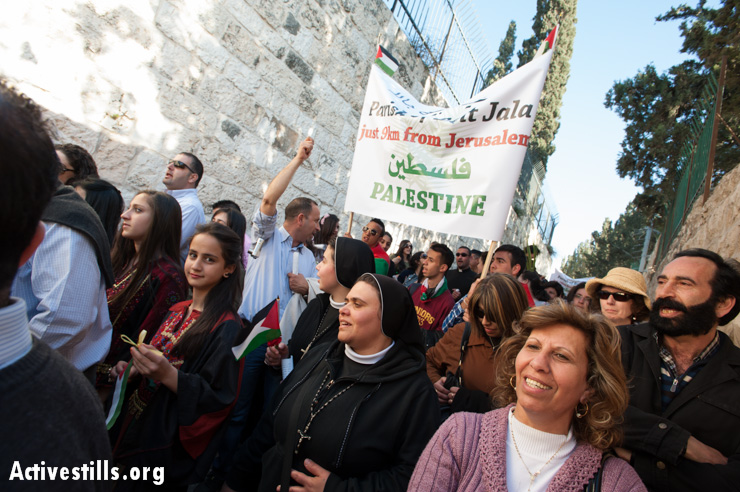 In the annual Palm Sunday procession, Palestinian Christians carry signs naming their West Bank communities, all of which are cut off from Jerusalem by the Israeli separation barrier, requiring their residents to obtain special permits to enter, March 24, 2013. Such restrictions have dramatically reduced the number of Palestinians able to participate in religious traditions of any faith in Jerusalem.

Whether during Ramadan or Easter, every year, Palestinians with West Bank IDs face challenges entering Jerusalem for religious worship. Despite claims by Israeli authorities of granting more permits and relaxing restrictions, each year thousands of worshipers are denied entry.

This Easter season, early reports indicate that Palestinian Christian communities from the northern West Bank had to cancel their Palm Sunday celebrations in Jerusalem due to a lack of permits. Parishes from the Bethlehem and Ramallah areas received between 30% and 40% of the permits they requested.

One individual from the Bethlehem area lamented that while he was granted entry, the rest of his family was turned away at the checkpoint. Such arbitrary policies are typical with Israel’s permitting system, which rarely provides a coherent rationale for who is granted and who is denied, other the than the catch-all excuse of “security reasons”.

There should not even be a question of needing permits to visit one’s own city…. East Jerusalem is the occupied capital of the Palestinian people and freedom of worship is a basic human right for all of our Christian and Muslim citizens; a right which is being systematically and increasingly denied by a foreign occupying force. The fact that so many Palestinian Christian communities are denied their simple human right to worship freely in their own capital city is unacceptable.

Palestinian Christians and Muslims rightly ask why if they are granted special permission to visit Jerusalem for religious holiday seasons–and are at that time not considered a security threat–why they are not allowed to freely visit throughout the year.

The heavy Israeli military presence along the procession route contrasts with the original meaning of the holiday. Palm Sunday celebrates Jesus’ “triumphal entry” into Jerusalem, marking the beginning of the Christian Holy Week. According to the Christian scriptures, Jesus rode a donkey into Jerusalem, and the celebrating people there lay down their cloaks in front of him and waved palm branches as a symbol of victory. Additional symbolism included his choice to ride on a donkey, perhaps referring to Eastern traditions that it is an animal of peace, versus the horse, which is the animal of war. A king came riding upon a horse when he was bent on war and rode upon a donkey when he wanted to point out he was coming in peace. Jesus’ entry to Jerusalem would thus symbolize his entry as the Prince of Peace, not as a war-waging king.

The Gospel of Luke also contains this prescient passage of Jesus’ entry into Jerusalem: “As he came near and saw the city, he wept over it, saying, ‘If you, even you, had only recognized on this day the things that make for peace! But now they are hidden from your eyes.'” 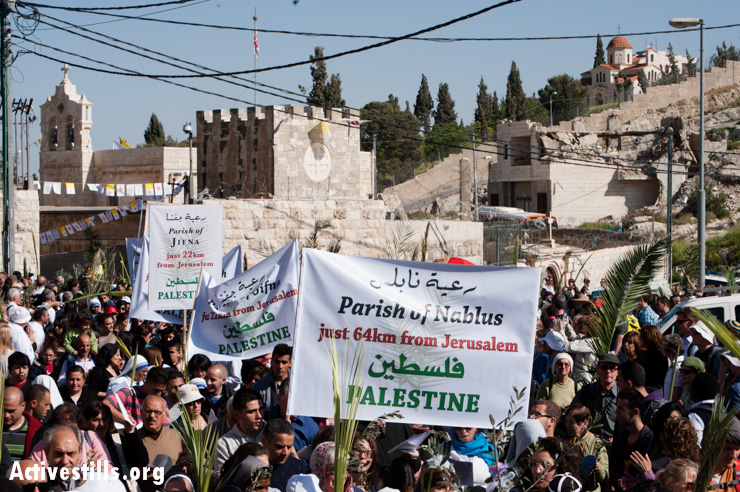 The procession begins at the Church of Bethphage on the Mount of Olives, also known as the “Palm Sunday Church”, which is located directly next to a Palestinian home that was demolished by Israeli authorities several years ago. 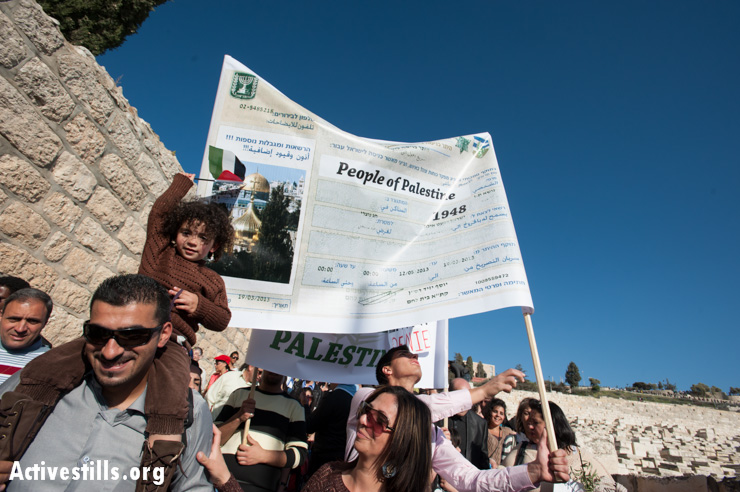 Palestinian Christians carry a mock Israeli permit for entering Jerusalem. All Palestinians living in the West Bank and Gaza are cut off from Jerusalem by the Israeli separation barrier, requiring their residents to obtain special permits to enter. 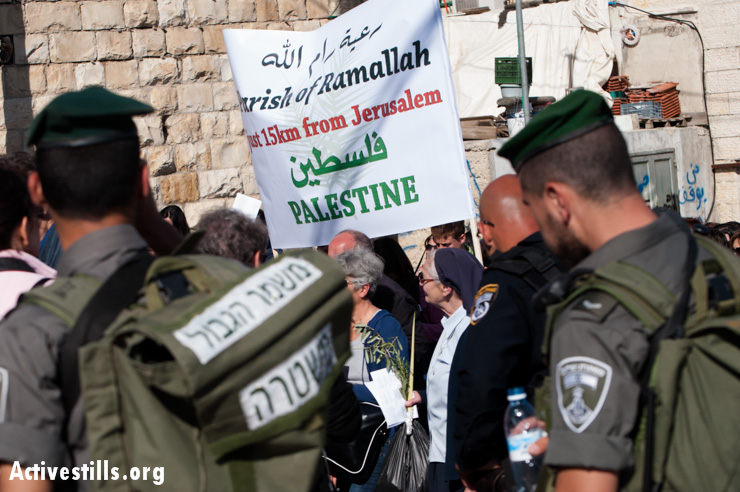 Israeli soldiers watch as Palestinian Christians in the annual Palm Sunday procession. Palm Sunday is the Christian celebration of Jesus’ triumphal entry into Jerusalem as the “Prince of Peace” the week before his crucifixion. 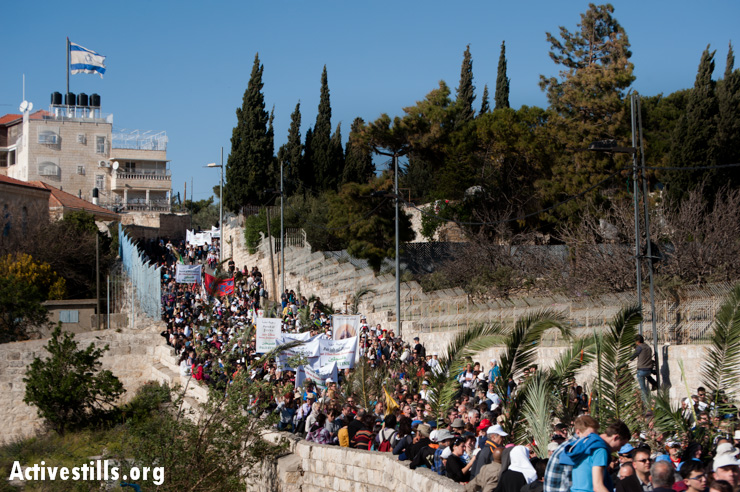 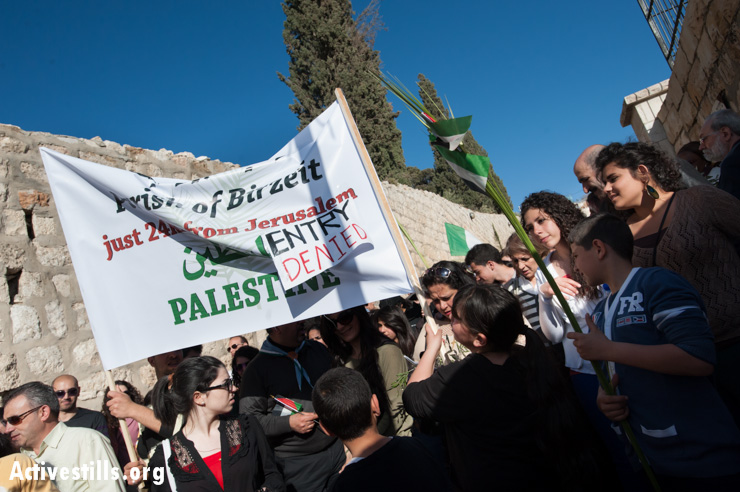 Palestinian Christians carry a banner for the West Bank town of Birzeit with a sign attached reading “Entry Denied”. This year, residents of Birzeit and several other West Bank communities did not receive the additional permits typically issued for religious seasons in time to participate in the Palm Sunday celebration. 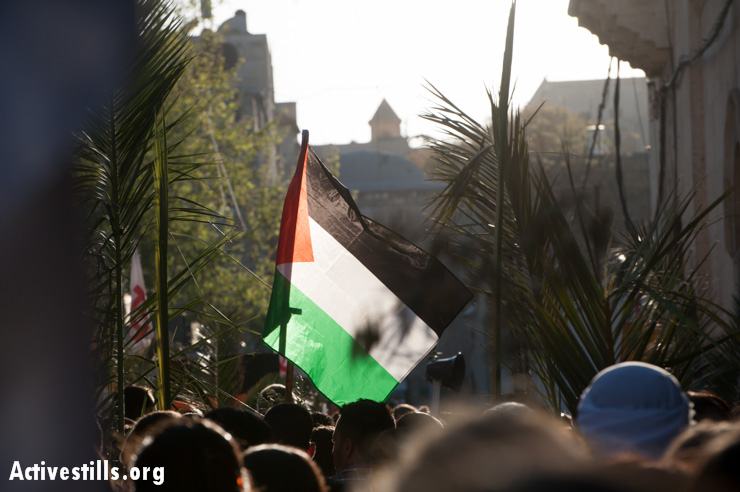 A Palestinian flag waves among palm branches entering the Old City of Jerusalem at the end of the Palm Sunday procession.