To mark International Palestinian Prisoners’ Day, which has been commemorated annually by Palestinians worldwide since 1974, Activestills brings you a look into the lives of Palestinian prisoners and their supporters struggling to obtain freedom.

According to Addameer, a Palestinian prisoner support organization, there are currently 5,224 Palestinian men and women held in Israeli prisons. These include 183 administrative detainees; 210 children; 21 female prisoners; and 11 members of the Palestinian Legislative Council. Since the occupation of the West Bank, East Jerusalem, and the Gaza Strip began in 1967, more than 700,000 Palestinians have been imprisoned by Israel. To this day, dozens of Palestinians are taken away from their homes, workplaces, schools, and from different checkpoints on a weekly basis. Some are detained for days, some for weeks, and some imprisoned for unlimited periods of time.

Since the start of peace negotiations in July 2013, over 2,000 Palestinians prisoners have been arrested.

The last twelve months have seen the continuation of a number of individual hunger strikes. In 2013 alone 38 prisoners launched hunger strikes for various reasons including their continued administrative detention and their re-arrest after being released in prisoner exchange deals. Ayman Tbeisheh is currently the only prisoner on hunger strike and has been striking for 48 days. 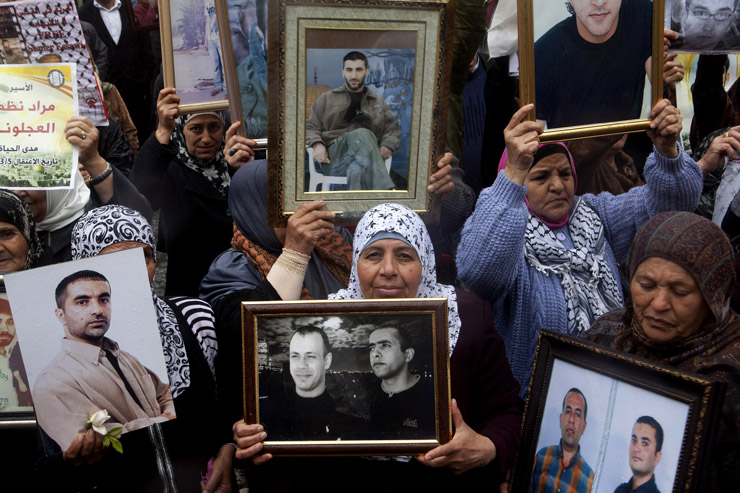 Palestinian women hold framed photos of imprisoned relatives during a rally commemorating the Palestinian prisoners, Ramallah, West Bank, April 17, 2013. April 17th marks Palestinian Prisoners Day. It was initially set to remind the public of the thousands of Palestinian prisoners that are imprisoned in Israeli jails, where they are routinely exposed to various methods of torture and other forms of inhumane treatment. (Activestills.org) 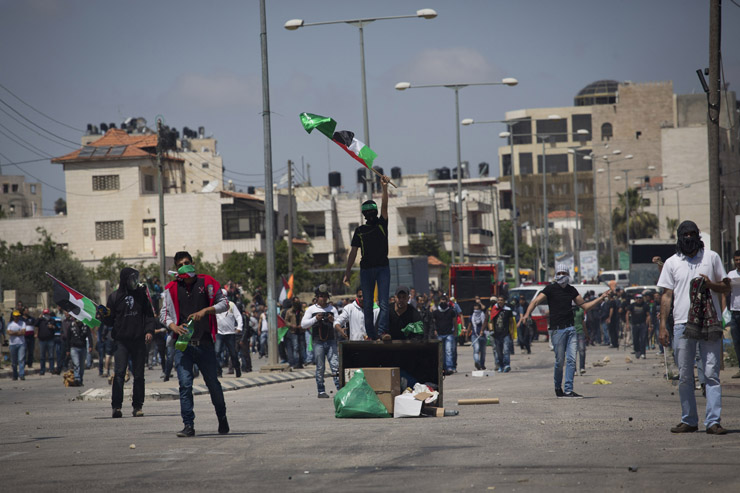 Palestinian protesters throw stones during clashes with the Israeli army near the Ofer military prison in West Bank town of Betunia, April 4, 2014. The protest called for the release of Palestinian political prisoners, including those who Israel was supposed to release this month as part of the Israeli-Palestinian negotiations. (Activestills.org) 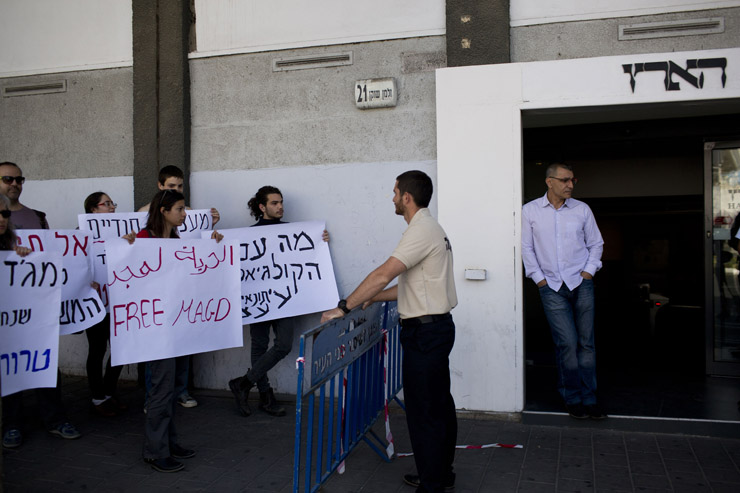 Israeli activists protest the arrest of Majd Kayyal outside Haaretz’s office in Tel Aviv, April 16, 2014. Israel has arrested and placed in incommunicado detention the journalist and researcher Majd Kayyal, a Palestinian citizen of Israel, on Saturday evening at the Sheikh Hussein crossing on the Israeli-Jordanian border, after he returned from a visit in Lebanon. Kayyal attended from a conference he independently attended to mark the 40th anniversary of the Al-Safir newspaper in Beirut, Lebanon. (Activestills.org) 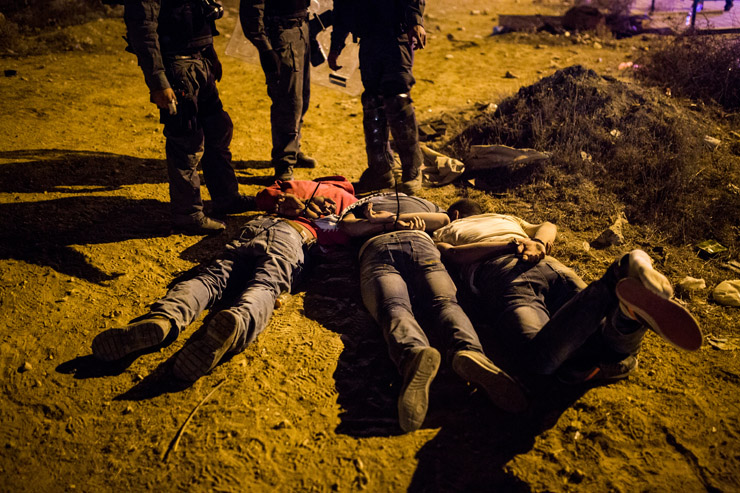 Bedouin youth arrested and handcuffed during an Israeli police raid on the main road of Hura town, after a demonstration against the Prawer-Begin Plan, on road 31 near Hura, Israel, November 30, 2013. Hundreds of Bedouin and Israeli activists protested and clashed with police, throwing stones and setting tires on fire. Oolice fired tear gas and arrested at least 10 protesters. (Activestills.org) 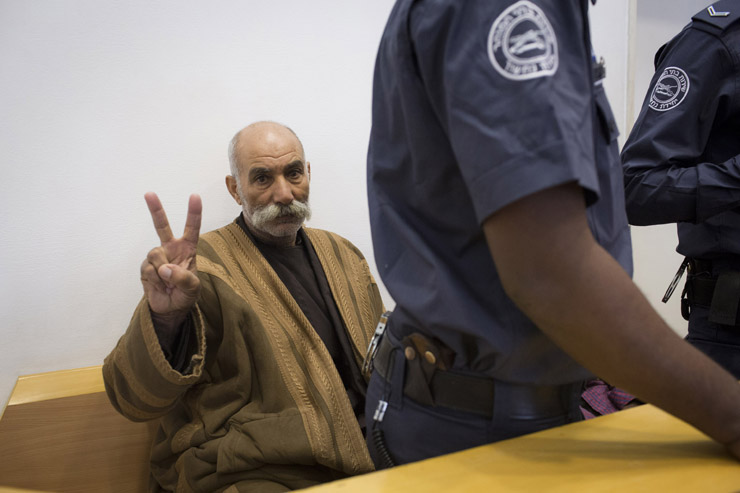 Sheikh Sayah Aturi seen inside the Be’er Sheva court for his hearing, November 28, 2013. Sayah was arrested on November 20, after his village, Al Araqib, was demolished by  Israeli authorities. The court decided to release him, placing him under house arrest for a week in a location outside his village. (Activestills.org) 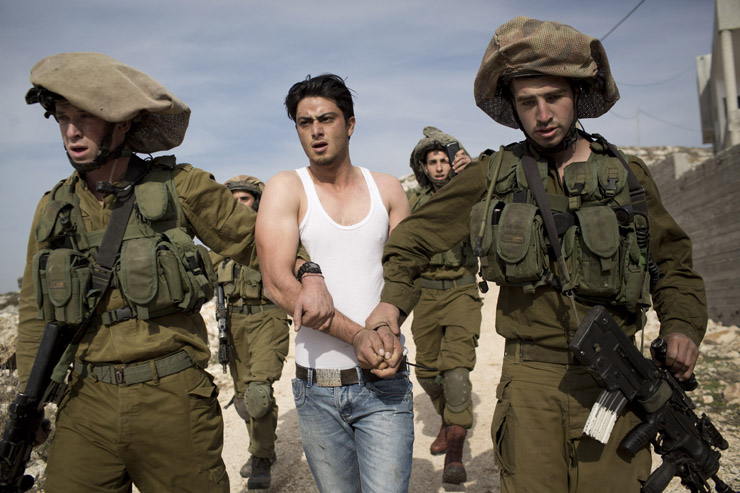 Israeli soldiers arrest a 24-year-old Palestinian youth during the weekly protest against the occupation in the West Bank village of Kafr Qaddum, January 3, 2014. (Activestills.org) 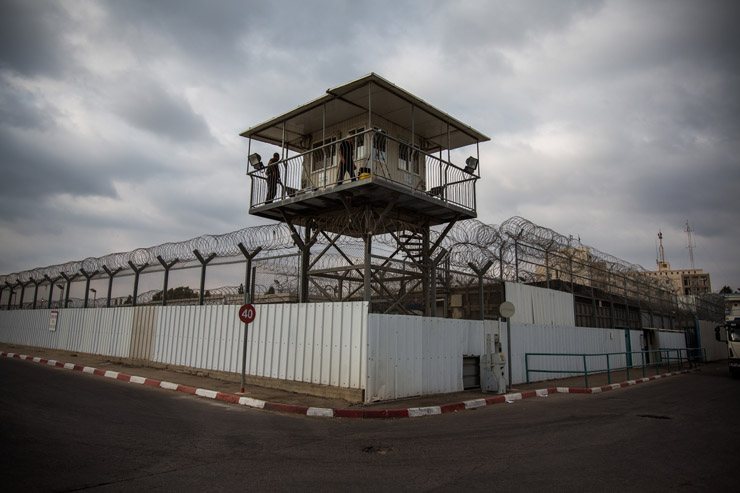 A view of Aylon Prison as Israeli right-wing activists and family members of Jewish prisoners who killed Palestinians protest in demand of the release of their relatives on August 13, 2013 in Ramla, Israel. The protest came in response to Israel’s announcement that 26 Palestinian prisoners will be released as part of Israeli-Palestinian negotiations. (Activestills.org) 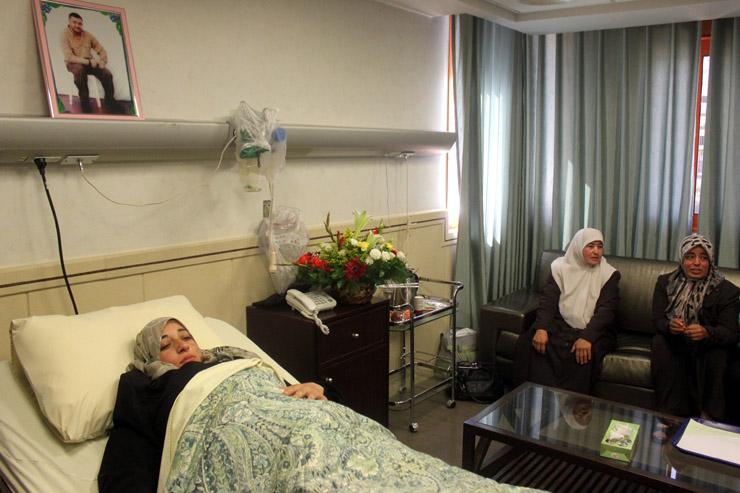 The wife of Abdel-Fatah shalabi, a Palestinian prisoner imprisoned by Israel, lies in bed at a hospital in the West Bank city of Nablus a few hours before surgery, April 2, 2014. The wife delivered a baby conceived through artificial insemination after her husband’s sperm was smuggled from an Israeli prison. Shalabi was arrested in 2003 and sentenced to 20 years in Israeli prison. (Activestills.org) 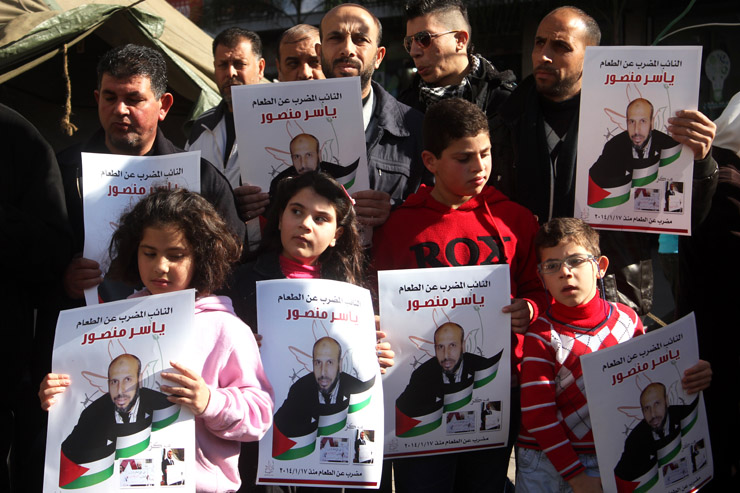 Palestinians demonstrate in solidarity with Yaser Mansour, a member of the Palestinian Legislative Council, who has been under administrative detention for fourteen months, Nablus, West Bank, January 20, 2014. Mansour started a hunger strike on January 17, 2014. (Activestills.org) 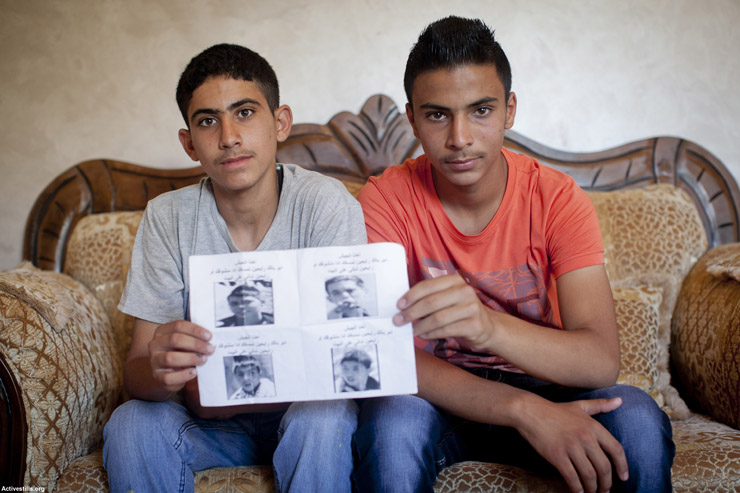 Youth from the village of Kfar Qaddum hold a poster that was handed out by Israeli soldiers during a raid. The poster reads: “We are the army. Be careful, we will arrest you if we see you, or come to your home.” The raid was done on the night between May 31st and June 1st, 2013. (Activestills.org) 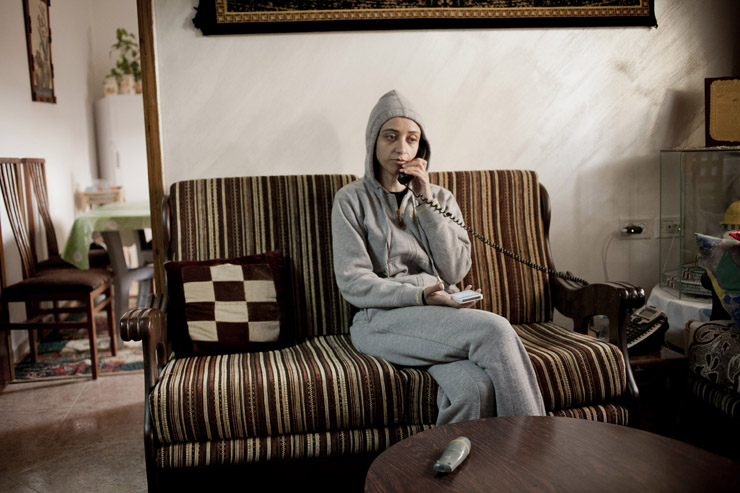 Shireen Issawi, a political activist and the sister of former administrative detainee Samer Issawi, receives a phone call from the Israeli police calling her in for another investigation, January 4th, 2014. Shireen is currently held in an Israeli prison. (Activestills.org) 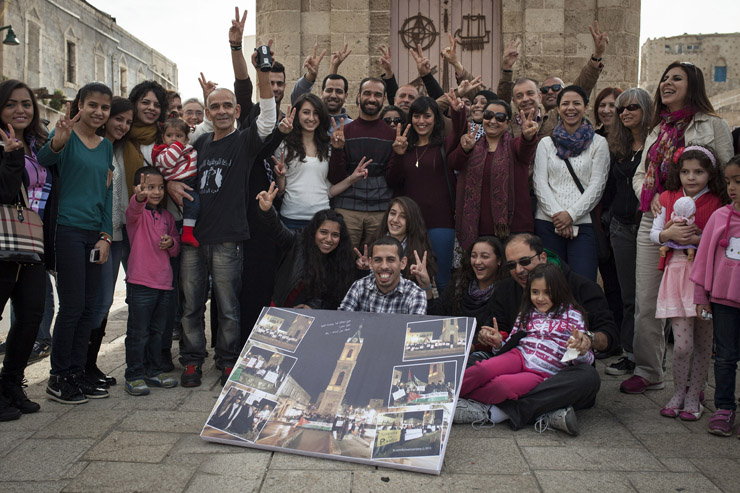 Former hunger striker Samer Issawi is greeted by activists in the Jaffa Clock Square, February 1, 2014. Issawi went on hunger strike for more than 200 days, protesting his prolonged administrative detention. Jaffa activists staged daily protests in the months prior to his release. (Activestills.org) 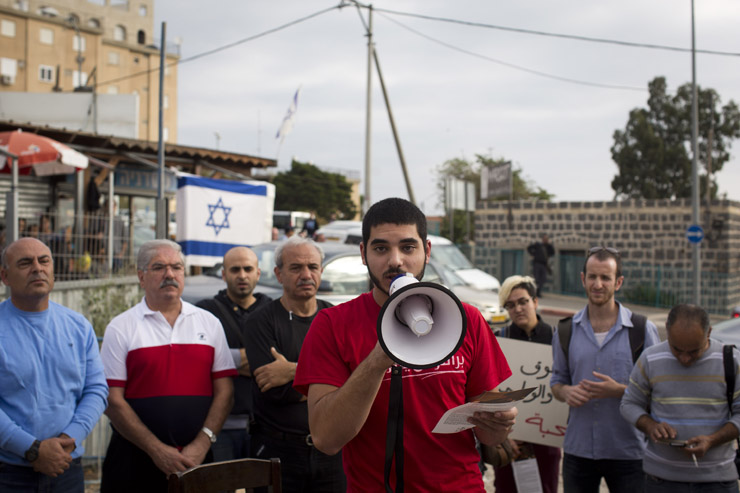 Omar Sa’ad, a Palestinian-Druze conscientious objector, speaks to family members and supporters, before entering the Tiberias military base, where he stated his refusal to be drafted into the Israeli army, December 4, 2013. (Activestills.org) 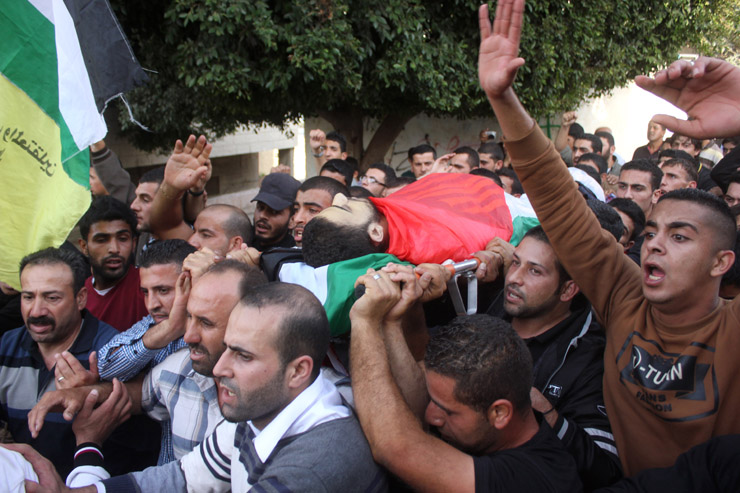 The funeral of Hasan Toraby, 22 years of age, who died at the Israeli hospital in Afula after being denied essential medical treatment in prison, Sara, West Bank, November 5, 2013. Toraby was recently moved to the Afula hospital after a sharp deterioration in his condition. He suffered from leukemia, and was not provided with urgent, specialized treatment. Toraby was from Sara village, near the northern West Bank city of Nablus. (Activestills.org) 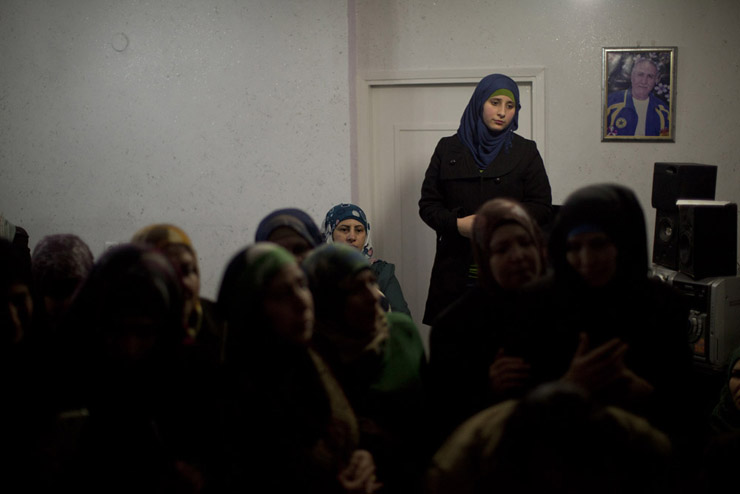 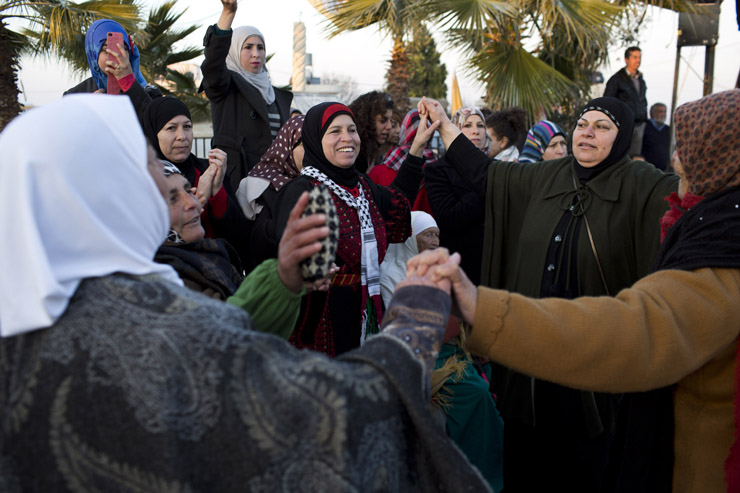 Residents of the West Bank village of Nabi Saleh take part in a celebration of the freed Palestinian prisoner Said Tamimi, who was released among 26 prisoners last week, January 3, 2013. The prisoners, who were all imprisoned before the 1993 Oslo Accords, were the third batch of 104 detainees that Israeli Prime Minister Benjamin Netanyahu pledged to release in four stages when the peace talks were revived in July. Tamimi served 20 years in Israeli prison, after killing an Israeli settlers from Beit El. (Activestills.org) 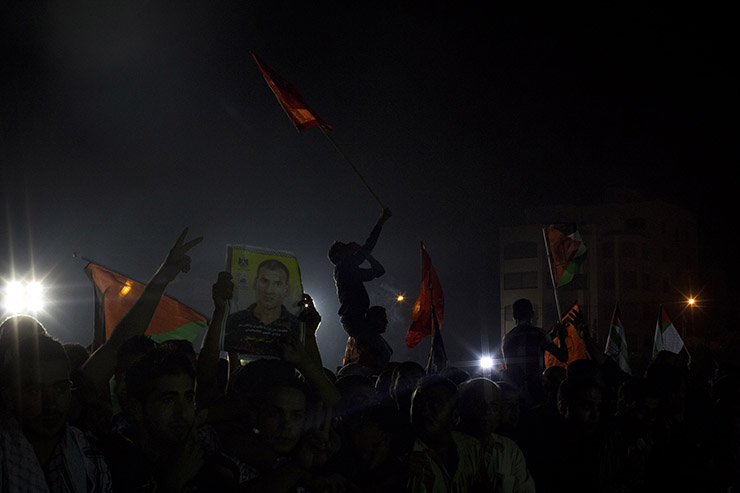 Palestinians celebrate as the wait for the arrival of prisoners freed from Israeli detention in the headquarters of Palestinian President Mahmoud Abbas in the West Bank city of Ramallah, August 14, 2013. Israel released 26 Palestinian prisoners will be released, 15 to Gaza and 11 sent to West Bank, as part of Israeli-Palestinian negotiations. (Activestills.org)