On Nakba Day, activists build a symbolic train to bring Palestinian refugees back to their homes in what is today Israel.

Photos and text by Oren Ziv/Activestills.org 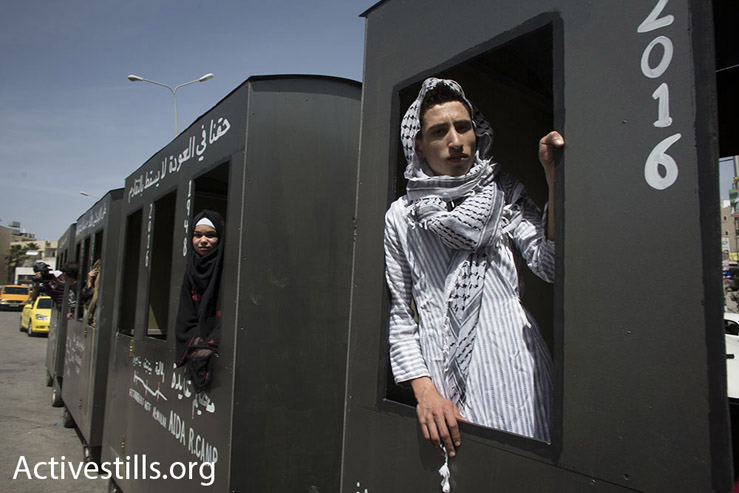 Hundreds of Palestinians gathered outside the Bethlehem-area Dheisheh Refugee Camp on an unseasonably hot Sunday, Nakba Day, in order to board and accompany a symbolic “Return Train” meant to take Palestinian refugees back to their homes and villages from which they fled and were expelled in 1948.

Dheisheh is home to thousands of Palestinians who fled or were expelled from some 45 villages and cities in what is now the state of Israel.

The “train” was built by local activists. The locomotive was powered by an automobile, which pulled a number of passenger cars bearing the names of villages and cities to which the train was supposed to reach.

Read also: How I explained the Nakba to my kids 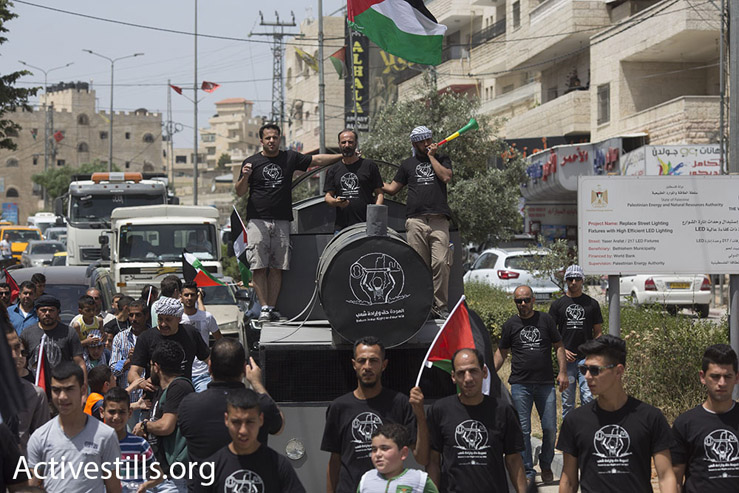 The ‘Return Train’ makes its way through Bethlehem, May 15, 2016. (Oren Ziv/Activestills.org) 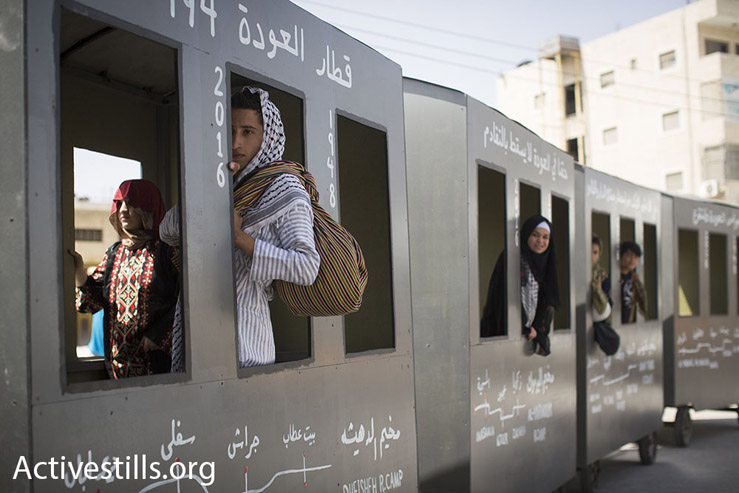 Palestinian lore says that refugees will eventually return to their homes via train, organizers explained, May 15, 2016. (Oren Ziv/Activestills.org)

Dozens of older Palestinians along the train’s route appeared emotional at the sight of the “Return Train,” especially when one activist jumped atop the locomotive and started yelling, conductor-style, the names of its would-be destinations: “Haifa! Akka! Safed!”

One of the organizers explained to +972 Magazine that according to Palestinian folk lore, Palestinian refugees from all over the world will return to their homes by train one day: from refugee camps in Jordan, Syria and Lebanon, from the West Bank and from Gaza. Therefore, he continued, they decided to build a symbolic train as a way of promoting the right of return.

Read also: Sentenced to life at birth: What do Palestinian refugees want? 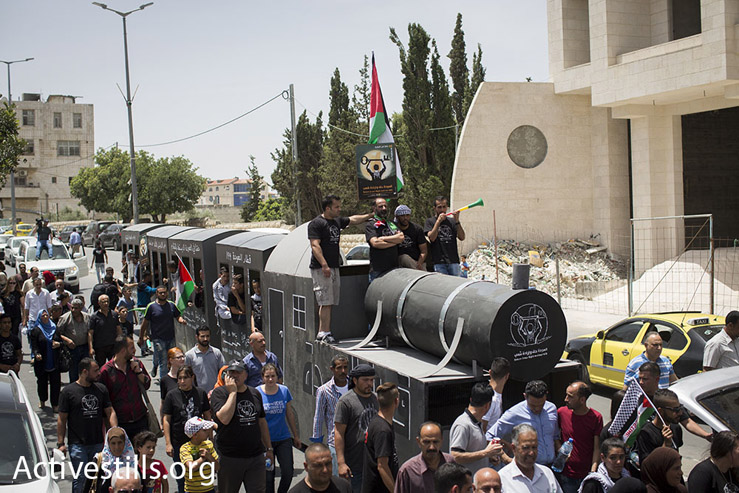 Crowds and activists accompany the ‘Return Train’ as it makes its way through Bethlehem, May 15, 2016. (Oren Ziv/Activestills.org)

Crowds gathered to see the train as it made its way along Bethlehem’s main road toward the Israeli separation all, which cuts off what used to be the main road connecting Jerusalem and the southern West Bank.

When the train neared the Israeli army’s “Checkpoint 300” soldiers and Border Police officers opened a massive steel gate in the wall, although not as some might have hoped to let the procession through. Instead, Israeli security forces crossed over to the Bethlehem side and fired tear gas toward the Palestinian youths who had started to gather while waiting for the train to arrive. 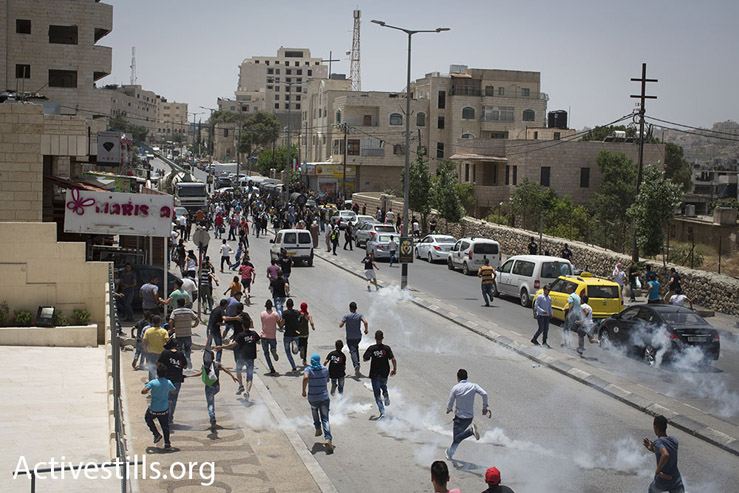 Israeli security forces fire tear gas toward Palestinian youths who were waiting near the separation wall for the arrival of the ‘Return Train,’ May 15, 2016. (Oren Ziv/Activestills.org) 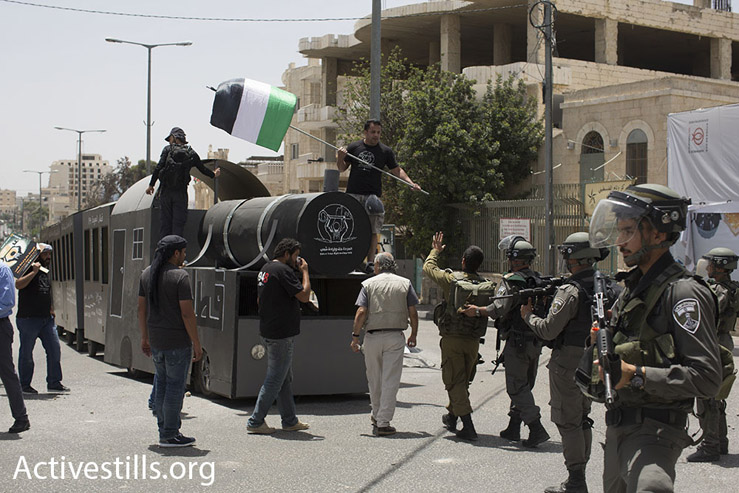 Israeli Border Police instruct the conductor of the ‘Return Train’ to turn around and not try to cross the separation wall into Jerusalem, May 15, 2016. (Oren Ziv/Activestills.org)

Despite the tear gas, a number of Palestinian activists made it almost all the way to the wall itself, where a Border Police commander told them that they would be better off turning the train around and not trying to pass through the gate into Jerusalem.

After driving the train in a few circles in front of the wall, the locomotive and its passenger cars continued along its way toward the Aida Refugee Camp, where it parked in front of a giant key representing the right of return. 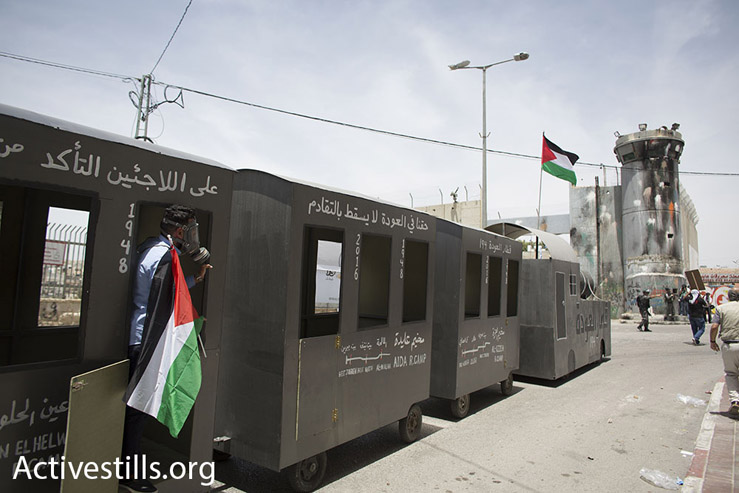 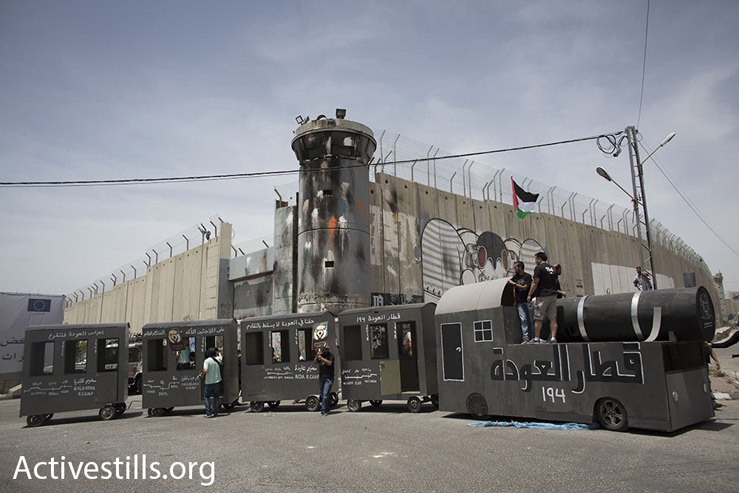 The ‘Return Train’ turns around at the Israeli separation wall, May 15, 2016. (Oren Ziv/Activestills.org)