Palestinian teachers in the West Bank have been on strike for the past month — yet neither the Palestinian nor Israeli media seem to care. 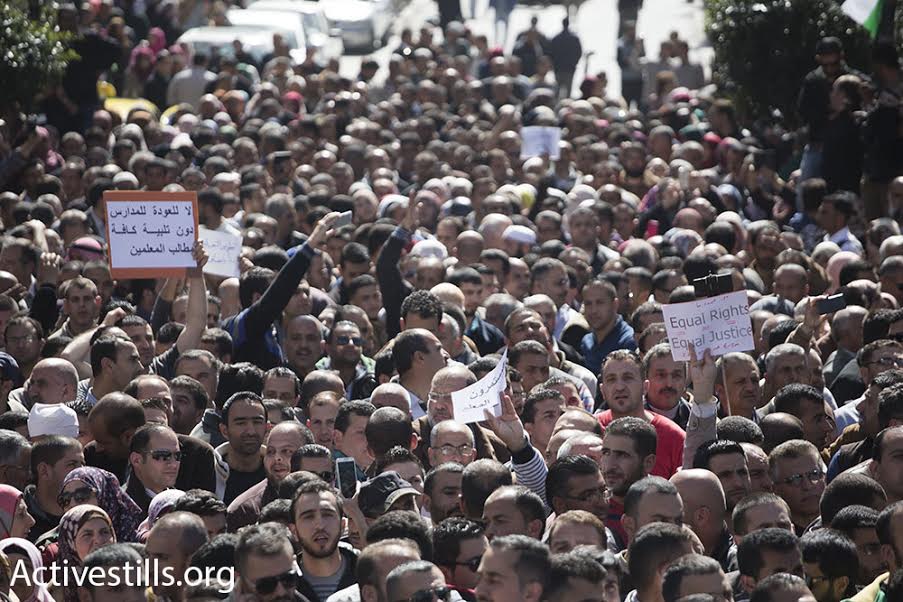 Nearly 10,000 Palestinian teachers demonstrated in Ramallah for better working conditions Monday, the largest such demonstration the West Bank has seen since the anti-Gaza war protests in 2014.

Protesters gathered in front of the local government offices and marched to Manara Square in central Ramallah through the city’s main thoroughfares while chanting “They won’t be able to break our teachers.” 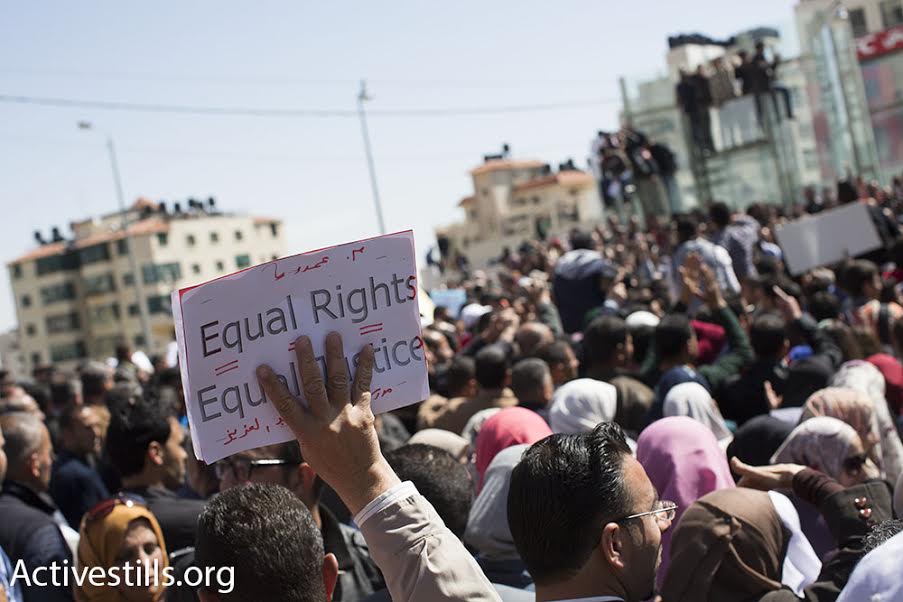 The protest took place on the fourth week of a mass teacher’s strike across the West Bank — the largest workers action in the occupied territories in the last few years — for higher salaries (veteran teachers earn approximately $615 per month).

Palestinian police, under orders of the Palestinian Authority, prepared to block the streets leading to the government offices. However, the police could not hold back the demonstration, which shut down the West Bank’s economic capital. 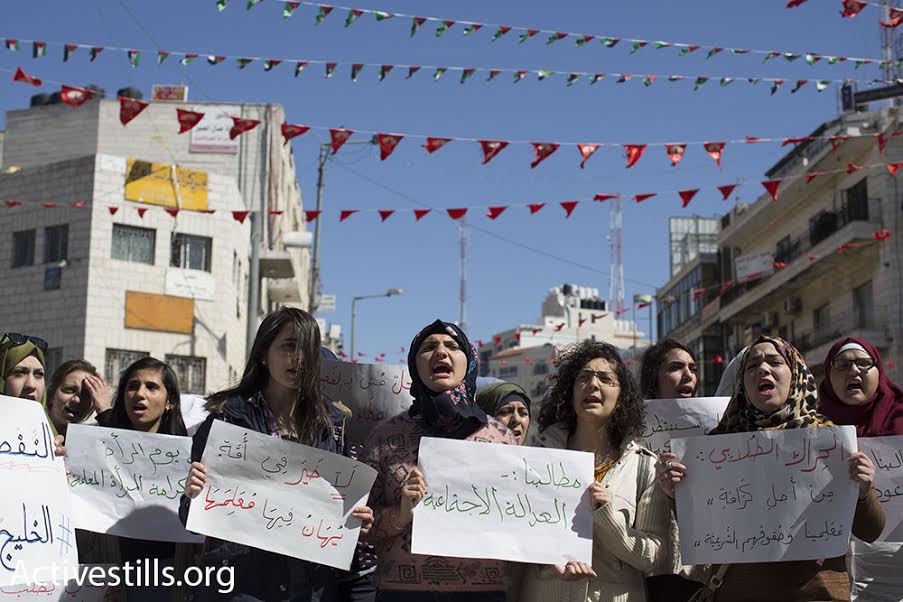 Like in previous protests, Palestinian police erected checkpoints at the entrance to Ramallah and in the city’s main streets. Many teachers who were prevented from taking part in last week’s demonstration arrived in Ramallah the previous night in order to participate in the protest the following day. According to several reports, Palestinian police detained and even beat a number of protesters traveling on the road that connects Bethlehem to Ramallah. A teacher at the protest joked that his friends from Nablus found a way out of the city that was not blocked by the Israeli army, yet had to wait at a Palestinian checkpoint upon entering Ramallah.

“We have been suffering for over 20 years,” Adib Fadel, a schoolteacher in the village Aqraba near Nablus, told +972 Magazine. “There are 40,000 teachers in the West Bank, and we demand justice from the Palestinian Authority — our salaries do not allow us to make a decent living. A standard salary is NIS 2,000 per teacher. This is not enough for food or even to put clothes on our children’s backs. We have been on strike for over a year and have not stopped.” 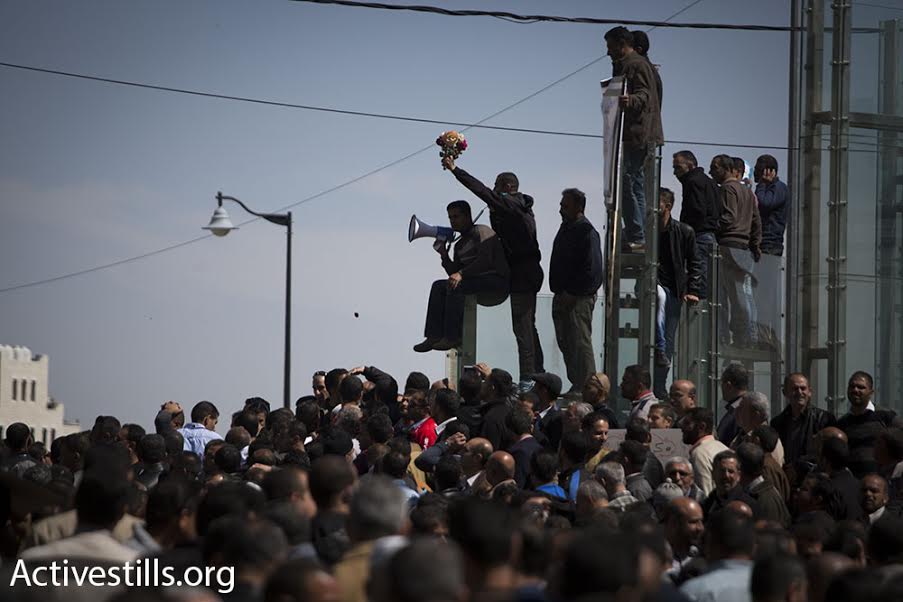 “Prime Minister [Rami] Hamdallah told us ‘wait until we find oil in Ramallah, and then we’ll pay gratuities to the teachers,’ but we are not in Saudi Arabia and there is no oil here. The students, teachers, and community all support us. We want to go back to teaching, but we won’t go back empty handed.”

As opposed to events having to do with the Israeli-Palestinian conflict, in which small protests are widely covered in the media, the teacher’s strike has received very little coverage. Even local outlets associated with the PA are not covering the strike.

Aside from Haaretz’s Amira Hass, the Israeli media has totally ignored the strike, which includes members of different political parties and has received much support among the Palestinian public. 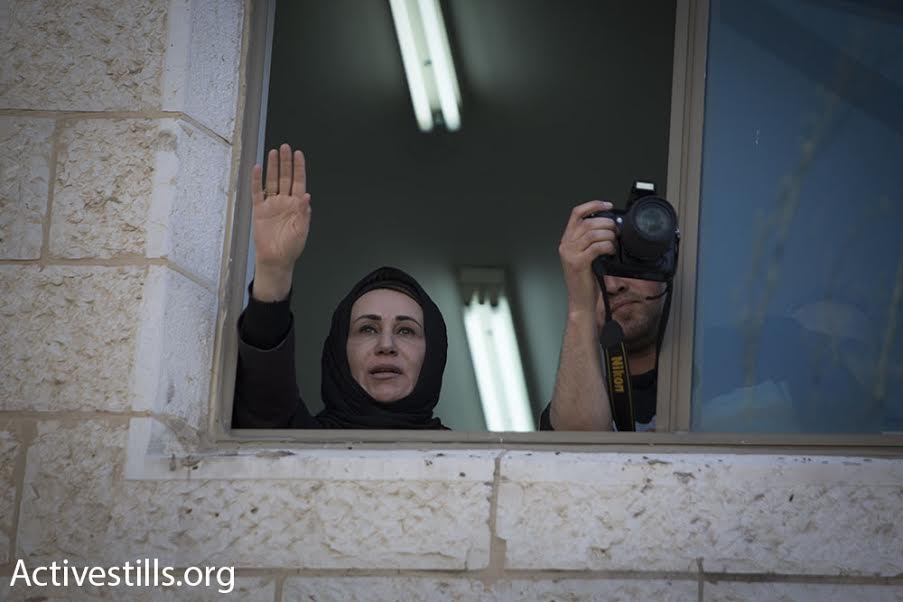 Palestinian MP Najat Abu Bakr waves at protesters from the Palestinian Legislative Council. Abu Bakr threw her support behind the strike and threatened to expose corruption in the Palestinian Authority, forcing her to remain in the PLC to avoid arrest. (photo: Oren Ziv/Activestills.org)

On their way to Manara Square, the demonstrators marched by the Palestinian Legislative Council (PLC), where MP Najat Abu Bakr, of the Fatah party, is currently staying. According to Hass, ever since Abu Bakr threw her support behind the strike and threatened to expose corruption in the Palestinian Authority, she has been forced to remain in the PLC to avoid arrest. When the march passed by the building, she stood at the window and waved at the demonstrators, who in turn chanted in support of the parliamentarian.