Israeli forces shoot a Palestinian worker near Gaza’s northern border in just the latest of many incidents of live fire against civilians posing no security threat. 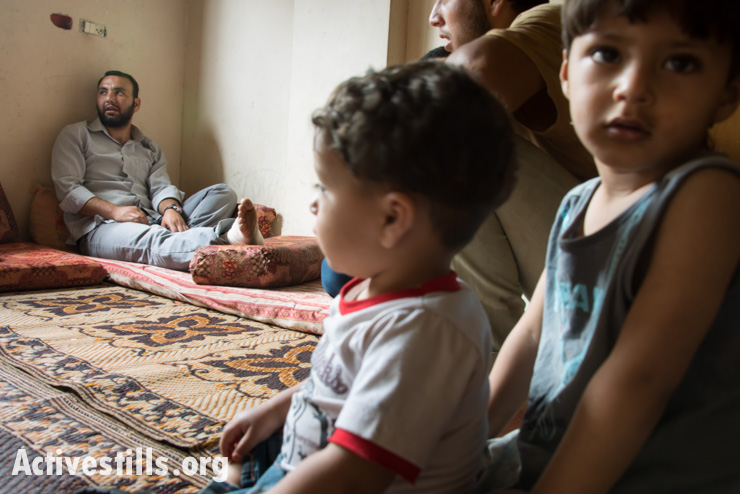 On Monday morning, Israeli forces shot and injured Palestinian Nizar Abdallah Al-Wan as he and six companions began salvaging building materials near Gaza’s northern border. Al-Wan was shot in the foot, and had to be taken by donkey cart to an area accessible by ambulance. He was treated in a Beit Lahiya hospital, and because the bullet passed through his foot without causing serious damage, he was released the same day to recover at home.

Al-Wan had worked in a garment factory until the Israeli siege forced its closure in 2006. Since then he was worked as a manual laborer to support his family of a wife and four children. 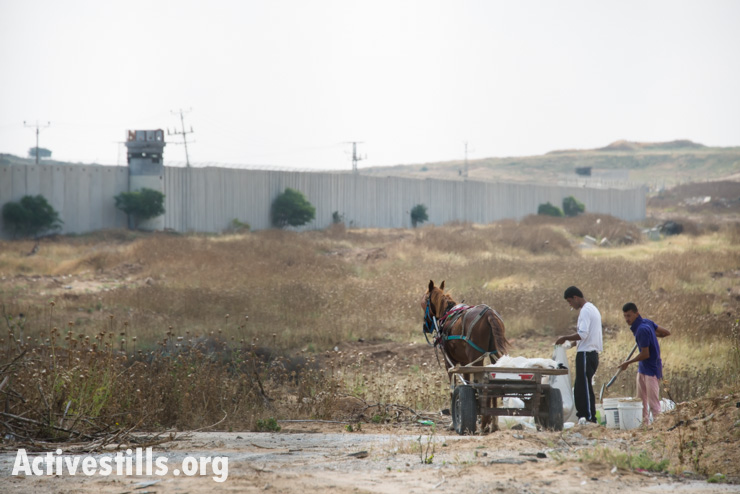 Al-Wan’s shooting is only the most recent incident in the Israeli military’s continuing pattern of shooting Palestinians who approach ill-defined “no-go zones” along Gaza’s borders with Israel. Ma’an News cited statements by a military spokesperson that “a few suspects in the area” near Erez crossing who were “tampering with the ground.” After using “riot dispersal means,” Israeli soldiers fired at the Palestinians’ lower extremities, “identifying a hit.”

As is often the case, the military version is almost completely at odds with the victims’ testimony. In this case, Al-Wan says that he was shot without warning after working for only 10 minutes in an area 500-600 meters from the wall. 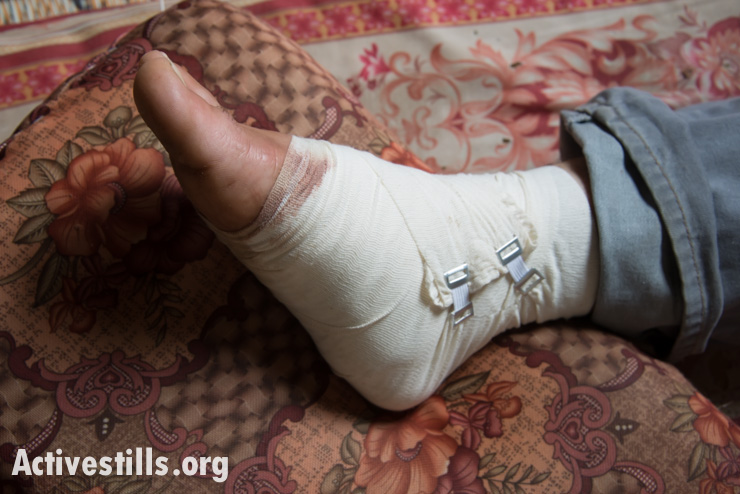 Nizar Al-Wan recovers in his home in the Gaza village of Jabalya the day after being shot by Israeli forces near the northern border, May 12, 2014. (photo: Ryan Rodrick Beiler/Activestills.org)

B’Tselem reports that it and other organizations have documented “dozens of cases of army gunfire at persons who posed no threat and were much more than 300 meters from the fence (up to 1,500 meters). In many cases, no attempt was made to arrest the persons, and no warning was given before soldiers opened fire.”

After the fatal shooting of a Palestinian worker, B’Tselem reported earlier this year:

After Operation Pillar of Defense (November 2012), the media reported the restrictions on access would be somewhat eased. Yet, three months later, the Military Spokesperson informed Israeli human rights organization Gisha – Legal Center for Freedom of Movement that Palestinians may not come nearer than 300 meters from the fence – the same as the previously authorized distance…. Moreover, if there must be an off-limits buffer zone between Israel and Gaza, the military must establish it in Israeli territory. Until it does so, the military must make it absolutely clear to residents of Gaza which areas are off-limits, and must not use live ammunition to keep civilians out of these areas. It is Israel’s right and duty to protect its borders and to prevent hostile activity. Yet it must do so within the parameters of the law, and at all times avoid injury to people who do not pose a security risk and not harm these individuals’ livelihood.