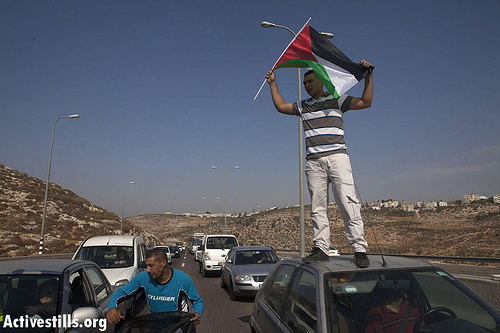 Palestinian and international activists block Route 443, which connects Tel Aviv and Jerusalem through the West Bank, during a protest against the violence of the Israeli settlers, October 16, 2012. (photo by: Anne Paq/Activestills.org)

On Tuesday, a group of Palestinians and internationals managed to block Route 443, which connects Jerusalem to Tel Aviv through the West bank, with only extremely limited access for Palestinians on whose land it is built. The demonstration took the IDF by surprise, and blocked traffic for approximately 30 minutes. 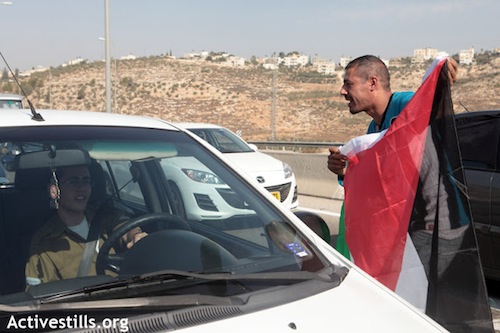 A Palestinian activist waves a flag in the face of a soldier driving on Route 443 highway, during a protest against the violence of Israeli settlers, October 16, 2012. Route 443 is built on Palestinian lands but use by Palestinians is severely restricted. (photo by: Anne Paq/Activestills.org)

According to Ma’an News:

Since 2002, Israel’s military has prohibited Palestinians from using the highway, which Israel expanded on privately-owned Palestinian land. The ban disconnects seven villages from each other and from Ramallah.

The Israeli high court ruled in Dec. 2009 that the ban on Palestinians using Route 443 in the West Bank should be lifted as it exceeded the Israeli military commander’s authority and broke international law.

Israeli’s military still denies Palestinians free use of the road, which is used by thousands of Israelis every day. Israel has reopened a small section of the road to Palestinians, but villagers are still unable to use it to access Ramallah. 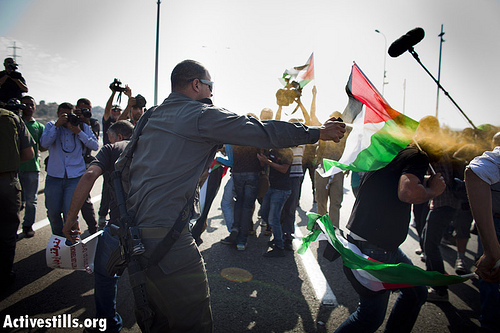 Israeli soldiers pushed back the protesters violently using pepper spray and sound bombs. Photographers and cameramen were also targeted, as well as one photographer from Activestills who was held violently but was not arrested. One Palestinian was arrested and was released shortly thereafter, but was beaten when out of view of the cameras. Some Israeli drivers were very upset: they were delayed for 30 minutes while Palestinians have not been able to use this road for five years. One driver attacked an Israeli cameramen. 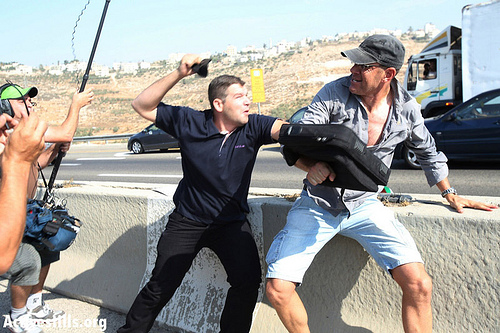 Today’s action was intended to raise awareness about “settler terrorism”. There has been a sharp increase of Israeli settler attacks against Palestinians, and since the beginning of the olive harvest, hundreds of olive trees have been destroyed by settlers. Many settlers try to create a climate of terror so that Palestinians will leave the West Bank or East Jerusalem. 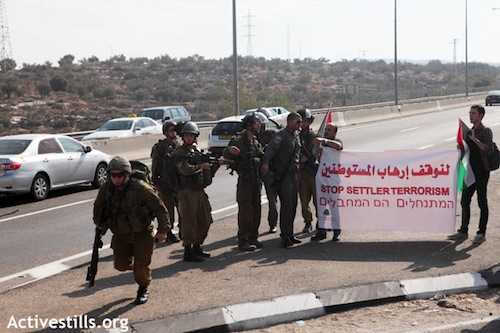 Palestinian and international activists confront Israeli soldiers while blocking Route 443, October 16, 2012. The direct action was organized in light of the increasing settler attacks against Palestinians and their property during the current olive harvest season. (photo by: Anne Paq/Activestills.org)

“We organized this action today to stress that as long as Palestinians suffer under the daily practices of the occupation and settler terror, Israeli daily life can’t continue on as normal,” said activist Mohammad Khatib. 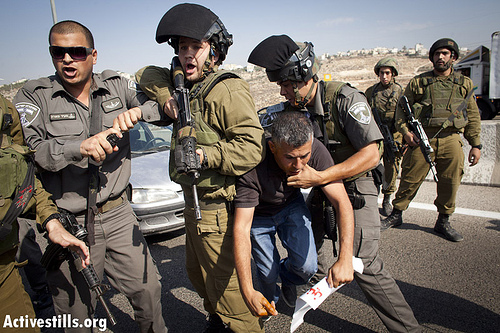 Tuesday’s action demonstrated that Palestinians are not going anywhere, and are far from giving up the struggle for their rights. Furthermore, it showed that despite the means used by Israeli authorities to track Palestinians–especially ones involved in the popular struggle–they cannot anticipate every move.