Palestinian citizens of Israel return to the village of Al-Ruways, which was destroyed by Zionist military forces during the Nakba. 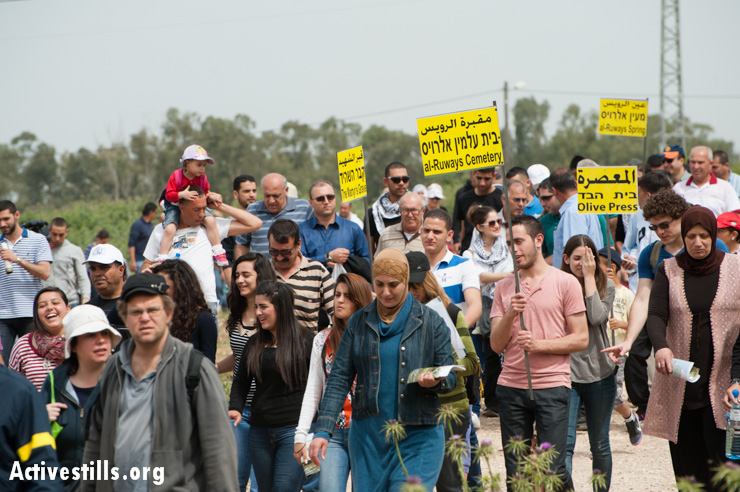 Palestinian citizens of Israel, joined by Jewish Israelis organized by the activist group Zochrot, return to the destroyed village of al-Ruways, March 30, 2013. All structures in Al-Ruways were destroyed and the original residents forcibly displaced to nearby Tamra by Jewish militias in the Nakba in 1948.

The Israeli group Zochrot organizes many tours of Palestinian villages depopulated during the Nakba of 1948. What made this Saturday’s tour of Al-Ruways particularly remarkable was the large number of displaced Palestinians and their descendants who made the event more of a return than a simple tour.

Zochrot, whose name means “remembering” in Hebrew, aims to educate Israeli Jews about the history of the Nakba and the Right of Return for Palestinian refugees. Typically, they will arrange for one or two refugees to help guide a tour of their home village, telling those who attend about life in their village before the Nakba, and the events leading to their displacement in 1948.

This week in Al-Ruways, dozens of local Palestinian residents of Israel were on hand for the return to Al-Ruways. Led by village elders who lived through the Nakba and experienced the displacement firsthand, the large group walked through the land of the village, marking various sites with signs to remind future visitors of the town’s existence. Such a large turnout of Palestinians was possible because when this village was forcibly evacuated by Zionist forces, they were simply pushed to the nearest town, Tamra, which remains until today. The residents of Al-Ruways were told by the Jewish militia leaders that after two weeks, that they would be able to return to their homes. Of course, as in many similar cases throughout what became the State of Israel, the displaced Palestinians were never allowed to return to their homes, even though they continued to live just a few kilometers away. The village itself was completely destroyed, with few visible traces remaining other than the cemetery and occasional pieces of rubble.

Recently, the mayor of Tamra has attempted to negotiate with the Israeli Interior Ministry to have the land of Al-Ruways added to Tamra’s village lands. Though the change has yet to be finalized, the tentative agreement hinged on one condition: that there would be no new building on the land of the long-demolished village of Al-Ruways. 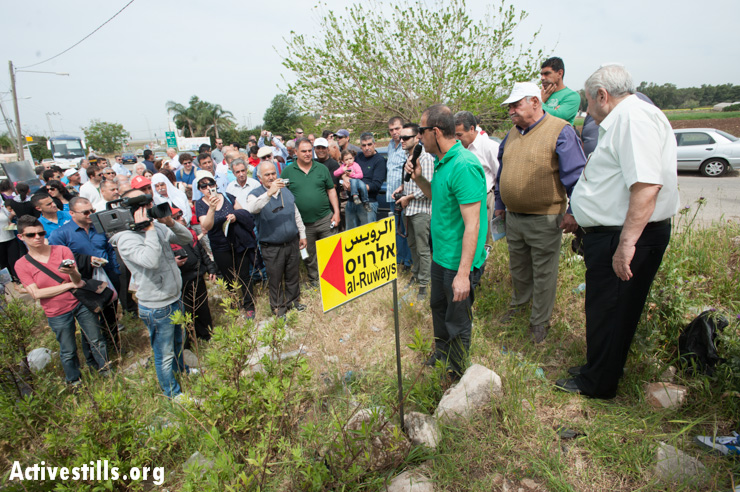 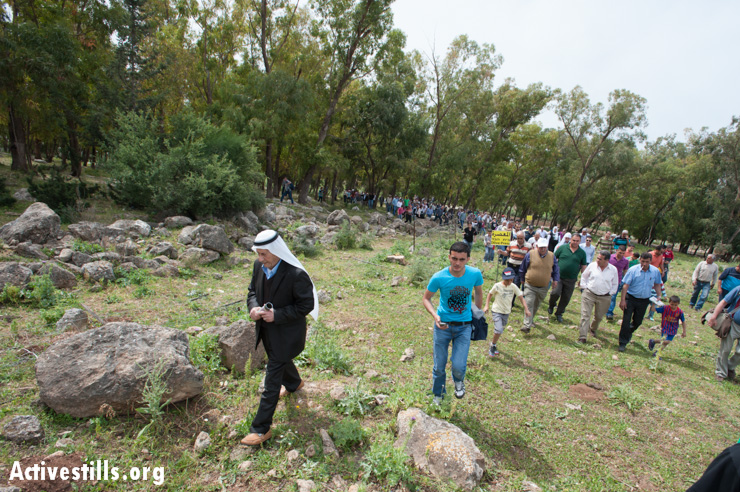 A village elder leads the group as they walk through the remains of Al-Ruways. 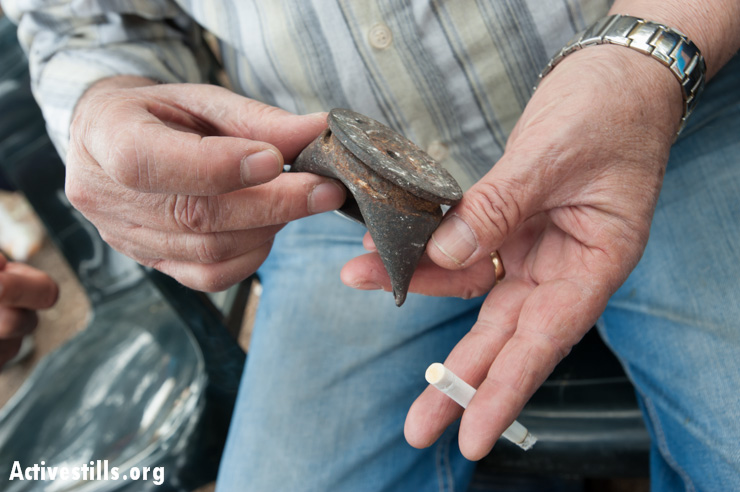 A local resident holds a shell casing found in the destroyed village of al-Ruways. 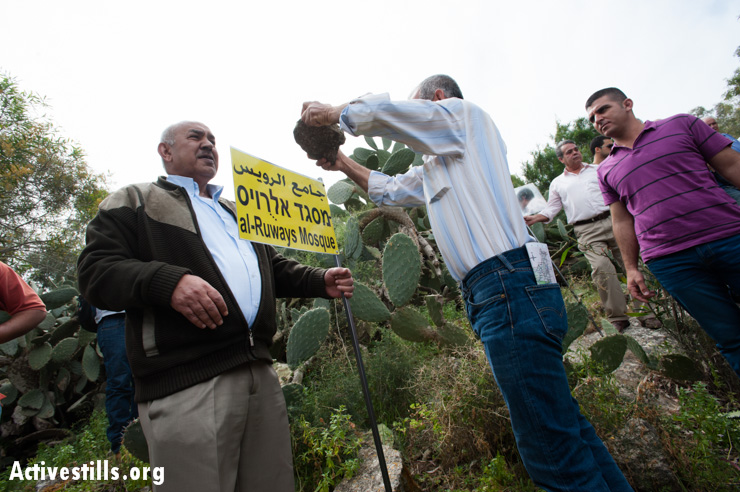 Palestinian Israelis mark the site of the mosque in Al-Ruways near a patch of saber cactus, itself a symbol of Palestinian steadfastness. 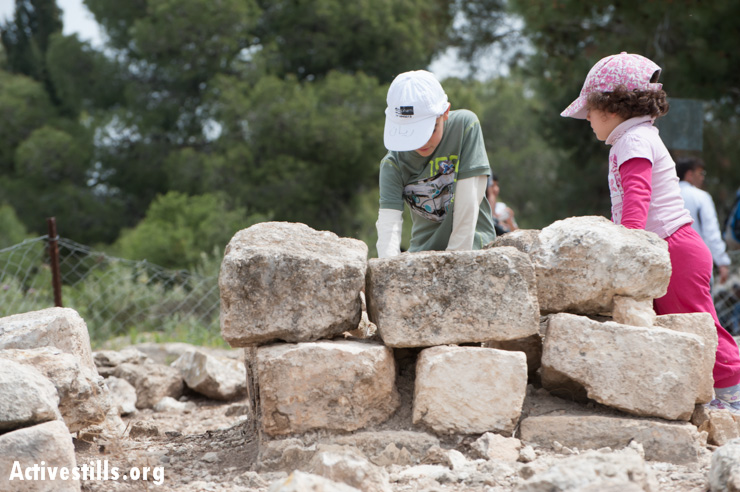 Children explore the cemetery of Al-Ruways, one of the few remaining visible traces of the village. 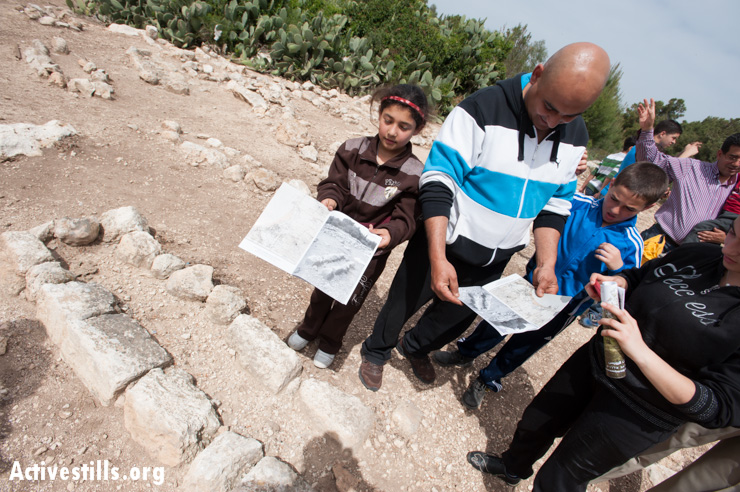 Palestinian citizens of Israel find a grave marker pictured in a guide book published by the activist group Zochrot, whose primary mission is to educate Jewish Israelis about the history of the Nakba. 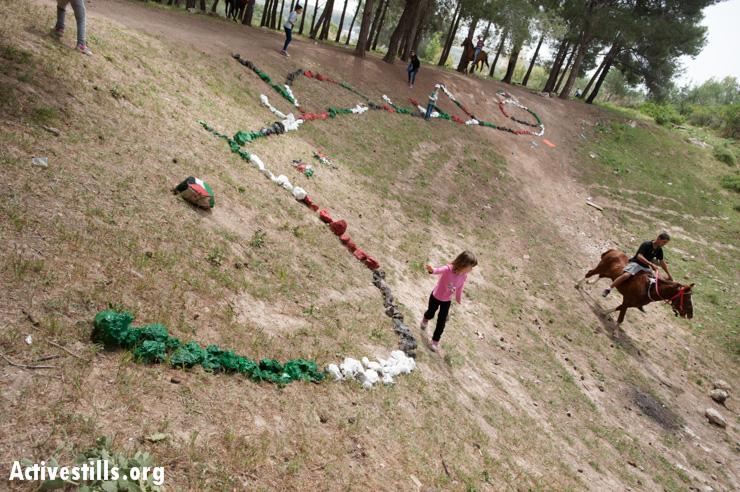 The word “Palestine” is written in painted rocks on land belonging to the destroyed village of Al-Ruways.

Read also:
Displaced Palestinians return to village after 64 years
For Palestinians, the Nakba is not history
Why the inconvenient truths of the Nakba must be recognized