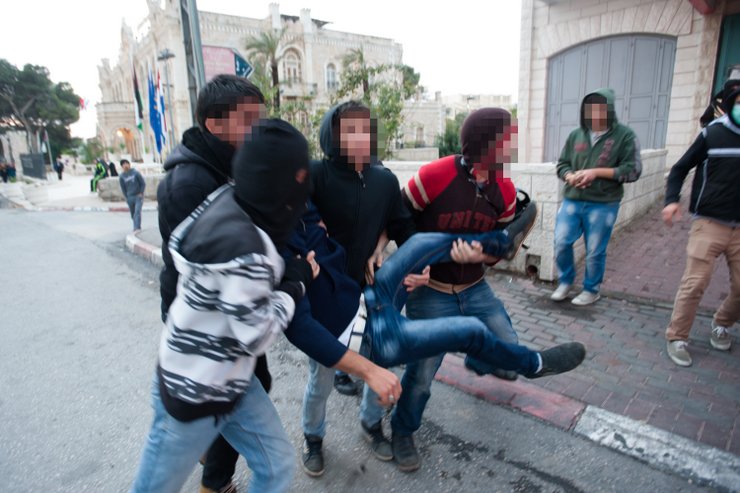 A young Palestinian man is evacuated after being shot through both legs with live ammunition from an Israeli soldier in a tower atop the separation wall, Bethlehem, December 6, 2013. (photo: Ryan Rodrick Beiler/Activestills.org)

Israeli forces shot two Palestinians with live ammunition on Friday. The weapons, presumed to be suppressed Ruger .22 caliber rifles, were used by Israeli soldiers stationed atop the separation wall during clashes in the West Bank city of Bethlehem.

This week saw several more incidents of live ammunition used against Palestinians in Bethlehem before Friday’s shootings which wounded two. In the second shooting Friday, a bullet passed through both legs (above the knees) of the young Palestinian man. 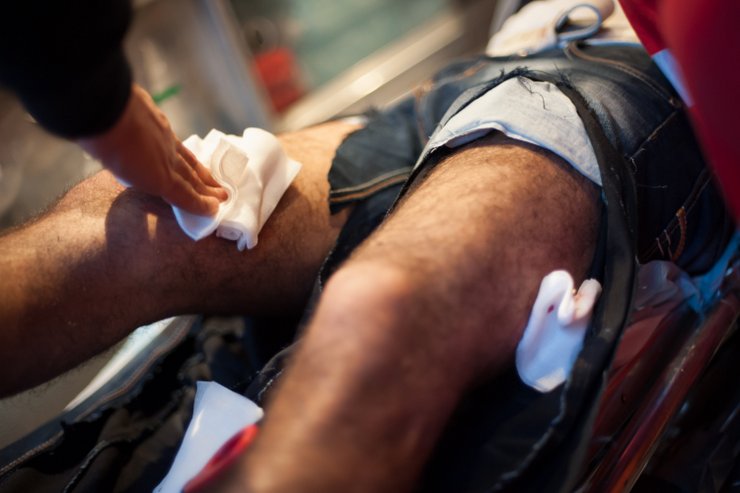 A young Palestinian young man receives medical treatment after being shot through both legs with live ammunition from a silenced rifle fired by an Israeli soldier in a tower atop the separation wall, Bethlehem, December 6, 2013. (photo: Ryan Rodrick Beiler/Activestills.org)

A report by Mairav Zonszein earlier this year showed the army using same form of ammunition when it seriously injured a 13-year-old boy:

The IDF spokesperson told me that they proceeded to shoot what they define as live ammunition (as distinct from accepted crowd dispersal methods, which include sometimes-lethal rubber-coated bullets) at the Palestinian “main inciters” only after “makeshift grenades” were hurled at them; standard IDF rules of engagement. …

However, the a specific type of bullet, the small .22 caliber bullets shot by a Ruger 10/22 rifle, were banned by the Israel military advocate general in 2001 as a means for crowd dispersal, because even though they are small, they can be lethal. Despite being banned as crowd dispersal methods, this bullet is still being used on various occasions during protests, and it kills. In 2009 it killed a teenager in Hebron and a protestor in Nil’in in June. … 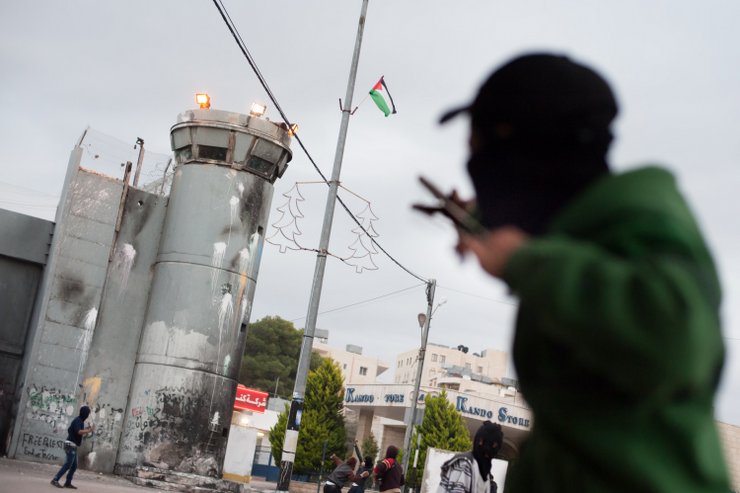 A Palestinian youth aims his slingshot at a tower in the Israeli separation wall, Bethlehem, December 6, 2013. (photo: Ryan Rodrick Beiler/Activestills.org)

It would seem that the “rules of engagement” since February’s shooting have either changed or are being ignored. In both the shootings last week in Aida Camp and today on Bethlehem’s Hebron Road, eyewitnesses reported no use of Molotov cocktails or “improvised grenades” by Palestinians before the Israeli sniper opened fire. In each case, Palestinian youth were throwing stones at the concrete separation wall and watchtowers.

In today’s shooting on Hebron Road, Israeli forces used no tear gas or rubber-coated bullets. Live ammunition was the first response and not a “last resort.” These latest incidents seem to create an emerging pattern that the use of such weapons for crowd-dispersal are not the exception, but are becoming a matter of routine.