Nearly 1,000 protesters — Palestinians, Israelis and internationals — marched to celebrate 10 years of popular struggle in the West Bank village Bil’in. Soldiers responded with tear gas, pepper spray and arrests. One Palestinian was badly wounded. Meanwhile, activists marked 21 years since the Cave of the Patriarchs massacre, and called to open Shuhada Street to Palestinians. 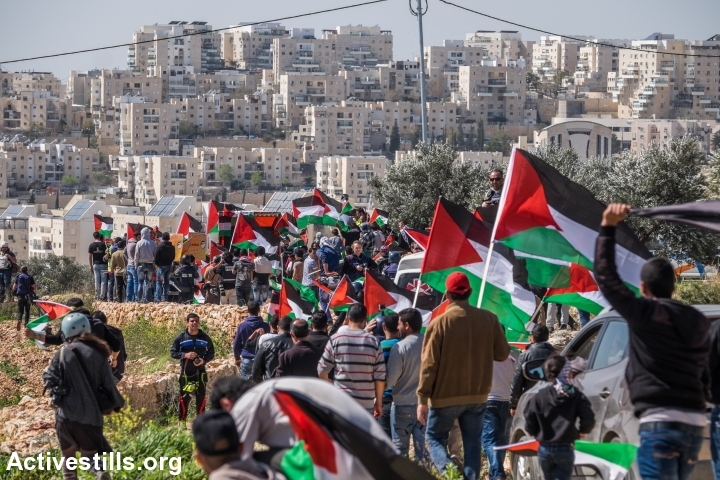 Palestinian, Israeli and international activists march during a protest marking ten years for the struggle against the Wall in the West Bank village Bil’in, February 27, 2015. (photo: Yotam Ronen/Activestills.org)

Approximately 1,000 protesters, most of them Palestinian, 100 Israelis and dozens of international activists took part in a large protest in Bil’in on Friday, marking ten years of popular struggle against the wall, the settlements and the occupation. Meanwhile, hundreds marched in Hebron to mark 21 years since the Cave of the Patriarchs Massacre, and demanded that the Israeli army open Shuhada Street to Palestinian traffic.

Over the last ten years, Bil’in has become an international symbol of popular, nonviolent resistance to the occupation, the settlements and the separation barrier. The village’s main road was decorated with photographs taken by Activestills, who have accompanied the struggle since day one. Decorations made of spent tear gas canisters were also hung. By 10 a.m., members of the Popular Struggle Coordination Committee — who lead the struggle in Bil’in — were joined by committee members from other villages; Israeli activists; journalists; members of the Joint Arab List MK Dov Khenin and Aida Touma-Sliman; and member of the Palestinian Legislative Council, Mustafa Barghouti.

Muhammed Khatib, a Palestinian activist with the Popular Struggle Coordination Committee in Bil’in, stands near a photo of him taken in 2005, at an Activestills exhibition marking ten years of popular in the West Bank village Bil’in, February 27, 2015. (photo: Shiraz Grinbaum/Activestills.org)

The march to the separation wall began shortly after noon, using the same route the residents have taken week after week for the past decade. The original separation fence kept some 1,950 dunams (480 acres) of Bil’in’s land on the Israeli side, for the purpose of expanding the Modi’in Illit settlement. The High Court, however, ruled that the fence must be moved, and after four years of waiting, the Israeli government built a new wall that only swallows some 1,300 dunams (320 acres) of the village’s land.

Friday’s protest was lead by a group of Palestinian scouts, who carried Palestinian flags and drums. They were followed by the demonstrators, who sang songs and chanted against the wall, the settlements and the occupation. As opposed to previous weeks, when Israeli soldiers greeted the protesters and tried to put down the demonstration at the site of the old route of the fence, this time soldiers waited behind the new wall. They began firing tear gas as the first demonstrators came closer to the wall. 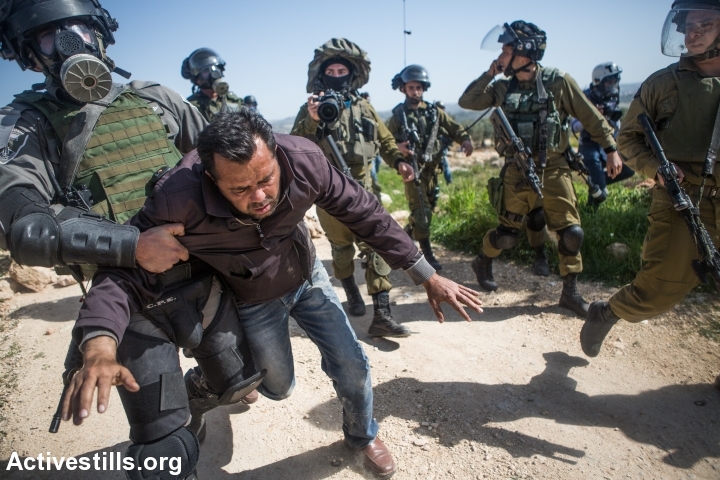 At once the entire valley was flooded with tear gas, forcing most of the protesters to retreat to a nearby hill. A group of 150 protesters tried to push their way through past the tear gas in order to reach the wall. A group of them carried flags and held flowers, while the younger Palestinians threw stones at the soldiers. 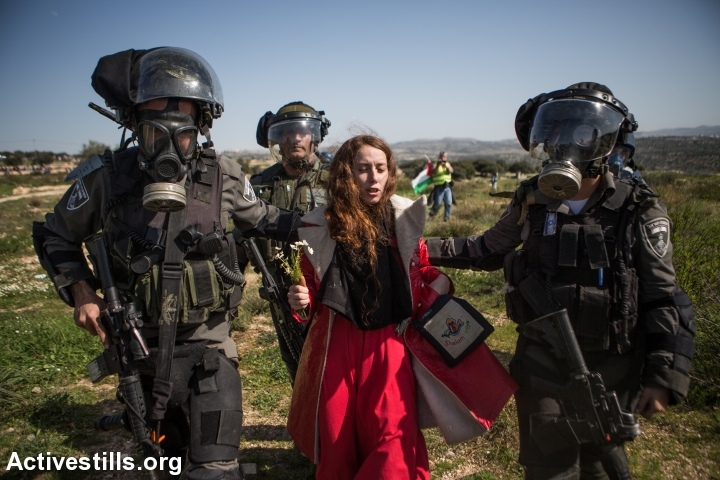 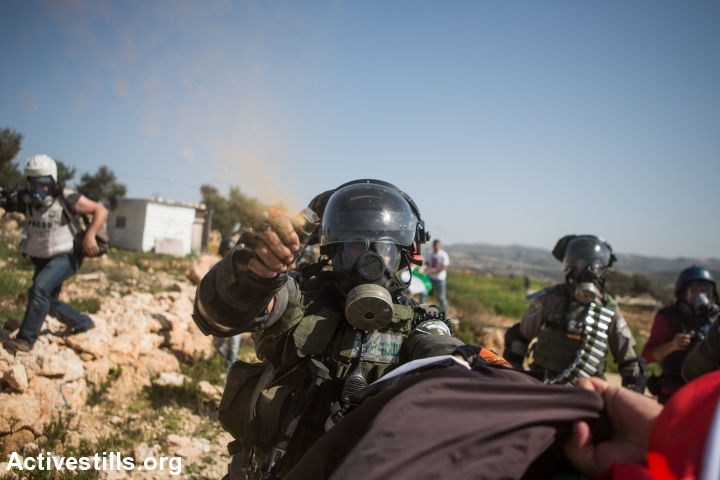 The exchange of tear gas and stones went on for an hour. Eventually the soldiers began shooting both live “tutu” bullets as well as rubber-coated ones. A group of Border Police soldiers crossed the wall, used pepper spray against nonviolent protests, and arrested three Israelis (including one who was holding flowers) and two Palestinians. One young Palestinian was badly wounded in his head by a rubber bullet and was evacuated to a nearby hospital. Several others were lightly wounded. At the end of the protest, the activists vowed that their struggle will continue as long as the wall prevents them from reaching their land. 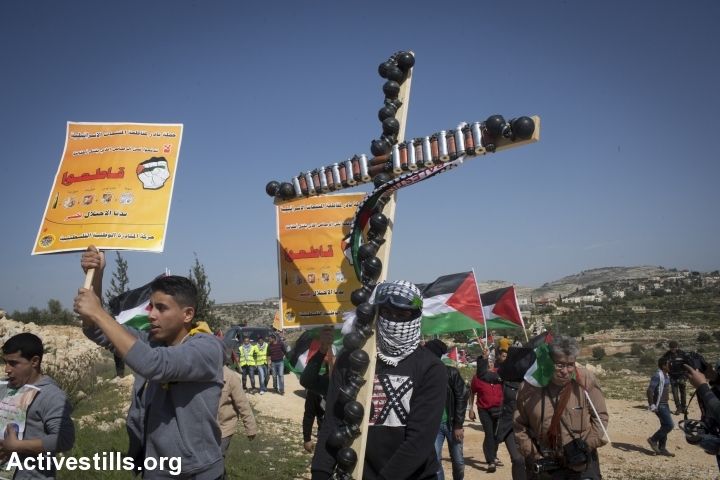 A Palestinian protester holds up a cross decorated with spent tear gas canisters during a demonstration marking 10 years of struggle in Bil’in. (photo: Yotam Ronen/Activestills.org)

As Bil’in marked ten years of popular struggle, dozens of Palestinians, Israelis and internationals protested in the heart of Hebron, marking 21 years since Baruch Goldstein massacred 29 Muslim worshippers in the Cave of the Patriarchs. Ever since the massacre, the Israeli army has severely restricted the movement of Palestinians in the city. The goal of the demonstration was to reach and demand the opening of Shuhada Street, which previously served as a main road and central economic hub of the city. The protest was organized by the Youth Against Settlements group, as well as by the Committee to Save Hebron, which is made up of different left-wing Palestinian political parties in the city. 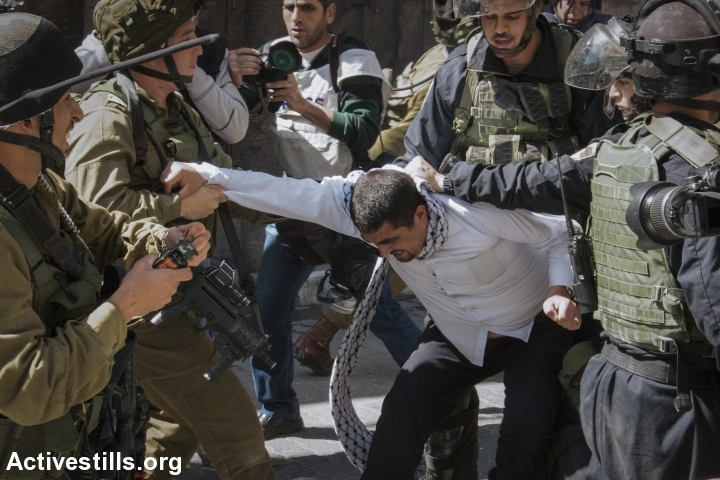 Israeli soldiers arrest a Palestinian man during a protest against the closure of the Shuhada street to Palestinians, in the West Bank city of Hebron, February 27, 2015. (photo: Miki Kratsman/Activestills.org) 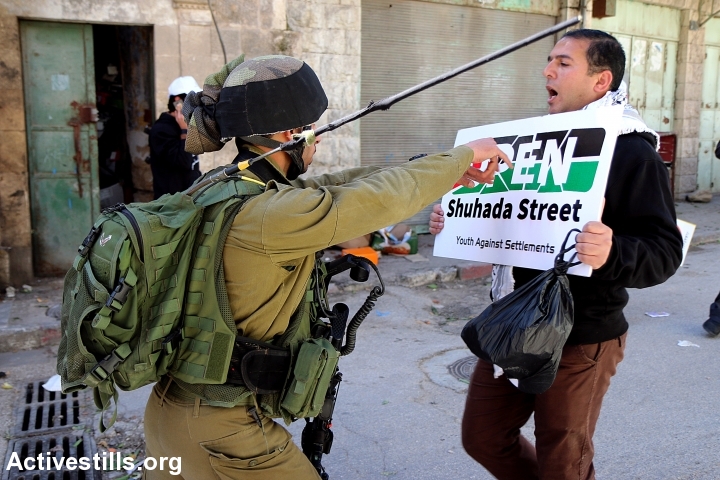 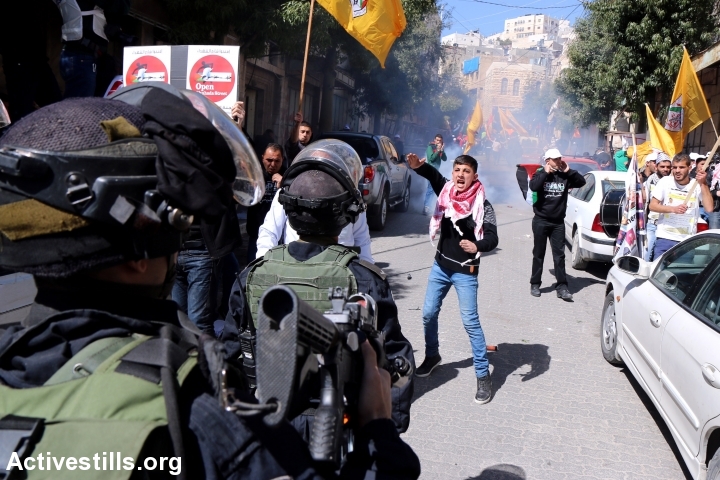 Soldiers and Border Police began firing stun grenades and tear gas at the protesters even before they were able to reach the street. Many of the demonstrators retreated, while the youth began throwing stones at soldiers from nearby roofs. Clashes continued for nearly an hour, while the marchers tried to find alternative routes into Shuhada Street. However, they were blocked by the soldiers every time. Three young Palestinians were moderately wounded by live fire.