Palestinian olive growers and their trees were attacked across the northern West Bank on Sunday, resulting in at least four injuries and the destruction of dozens of trees at the height of the yearly olive harvest. 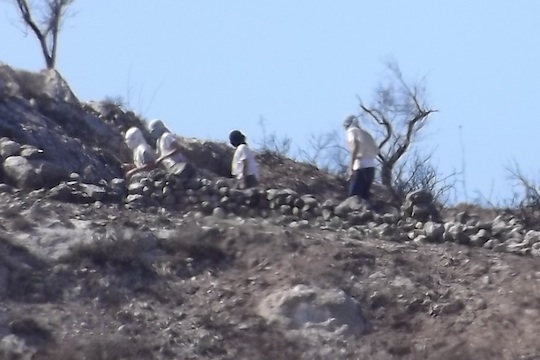 Masked settlers are seen descending from the direction of Yitzhar toward Palestinian olive growers on the lands of Burin, October 20, 2013. (Photo: Munir Qadus / Yesh Din)

In the village of Burin on Sunday, Palestinian olive pickers and Israeli volunteers were attacked by masked settlers, who arrived from the direction of the nearby settlement of Yitzhar, notorious for being the home of many violent settlers/elements.

Two Palestinians and two Israelis were injured by the settlers who attacked them with stones and iron bars, according to Rabbis for Human Rights, whose volunteers were attacked. The Israelis, aged 71 and 18, were both injured in their faces. 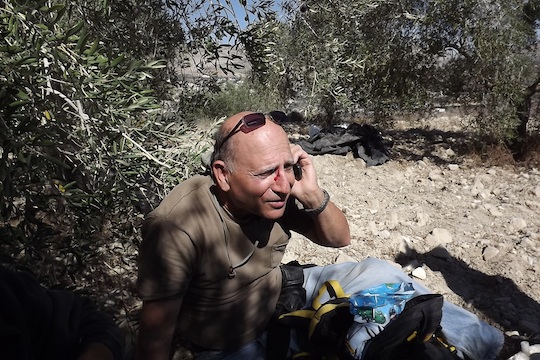 A man’s face is bloodied after being attacked by Jewish extremists who descended from the direction of Yitzhar toward Palestinians and Israeli volunteers picking olives in Burin, October 20, 2013. (Photo: Munir Qadus / Yesh Din)

Close to 2,000 Palestinian olive trees have been either uprooted or burned in recent months in areas the Israeli army knows to be flash points, where it should be providing protection for the Palestinian olive pickers, Rabbis for Human Rights wrote in a statement.

Elsewhere in the northern West Bank, Palestinian olive growers from the village of Qaryut on Sunday discovered that settlers damaged their trees the day before. Officials from the Palestinian Ministry of Agriculture who arrived at the scene counted 60 damaged trees belonging to 12 different farmers. 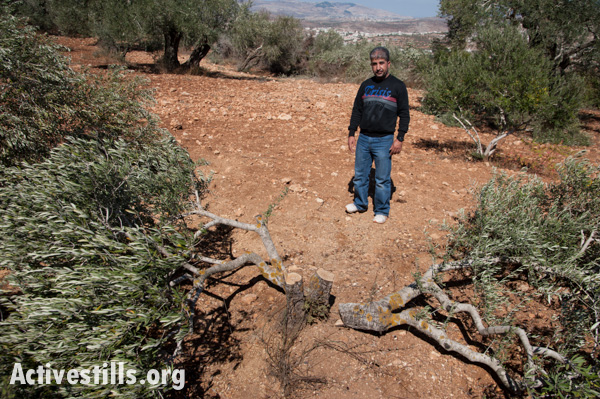 Palestinian farmers from the West Bank village of Qaryut assess the damage done to their olive trees the day before by Israeli settlers, October 20, 2013. (Photo: Ryan Rodrick Beiler/Activestills.org)