The campaign to expel Israel from FIFA makes its way to the weekly anti-occupation protests in the West Bank. 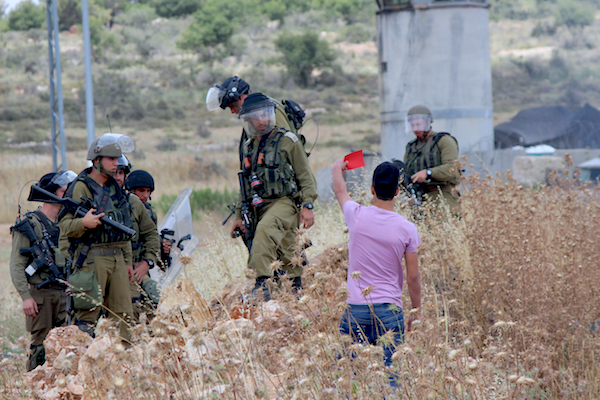 A Palestinian demonstrator shows Israeli soldiers the red card during the weekly demonstration in Nabi Saleh, May 29, 2015. (Natasha Roth)

As the world watched the FIFA Congress Friday to see whether the international soccer organization would vote to expel Israel from the association, today’s weekly demonstration in Nabi Saleh took the form of a soccer game.

Under the watchful eyes of IDF, Border Police and riot police units stationed at the village entrance, Palestinians and internationals placed rocks on the main road to act as goalposts, and began competing against each other in penalty shootouts (the rocks are most often placed on the road to attempt and block the path of IDF Jeeps).

Although the army initially responded by throwing stun grenades and firing tear gas at the demonstrators, it seemed that a decision was made to avoid the usual violent response customary at Friday demonstrations in the village. 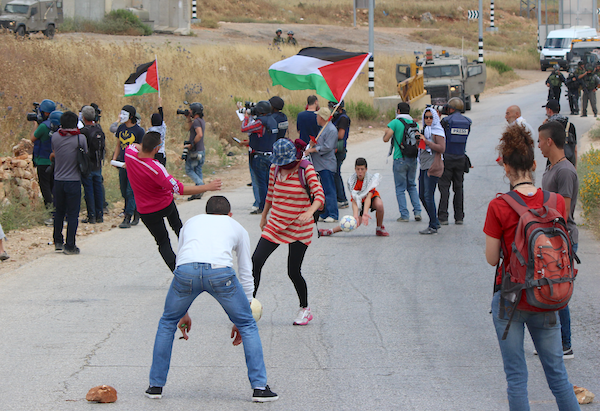 Palestinians and internationals play football, marking a vote to expel Israel from FIFA that was expected to take place later in the day. The game formed part of the weekly demonstration in Nabi Saleh, May 29, 2015. (Natasha Roth)

Instead, baffled and bemused-looking soldiers stood in groups watching as Palestinian children — tentatively at first, and then more confidently as the expected fire did not arrive — ran up to them brandishing red cards. The cards were a reference to the lingo (“show Israel the red card”) that has characterized the Palestinian campaign to have Israel expelled from FIFA on numerous grounds, including restrictions on movement of Palestinian players. 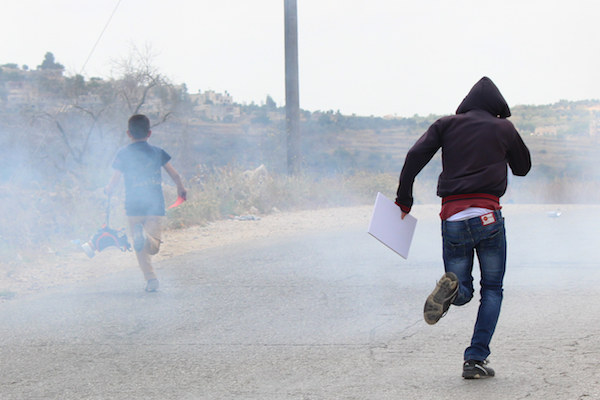 In the end a vote on these grounds did not occur, with a last-minute deal reached between the respective Israeli and Palestinian football associations and FIFA. Instead, head of the Palestinian FA Jibril Rajoub announced an amended proposal that would establish a committee to examine issues of racism, freedom of movement for Palestinian soccer players and the participation of settlement teams in the Israeli football league. The new proposal easily passed. 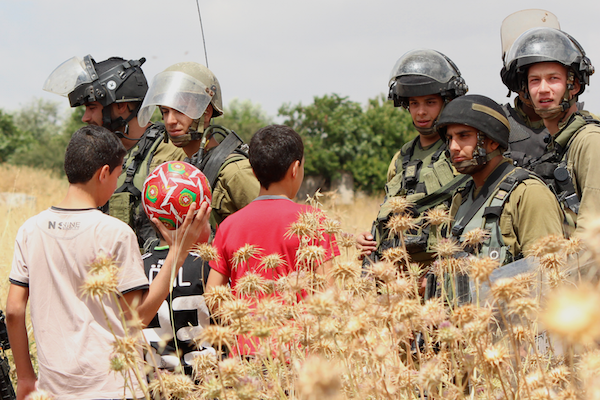 The reaction to Rajoub’s decision to drop the initial proposal has been met with anger at a missed opportunity to shake up the status quo. Manal Tamimi, a prominent activist in Nabi Saleh, says that “we had a hope and a dream, and just before it came true they stole it from us. That said we achieved some demands, but until we really know what happened today we are disappointed.” 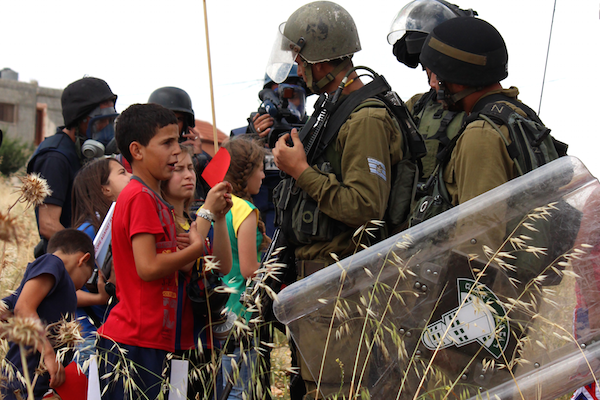 According to Bassem Tamimi, another well-known activist in the village, Friday’s events demonstrated why many Palestinians “do not expect anything good from the Palestinian political system. It’s sad… We do not trust our leaders to talk about Palestinian rights or to lead our struggle.”

A return to the status quo can be expected in Nabi Saleh next week, after Friday’s carnival-like atmosphere. Indeed, elsewhere in the West Bank it was business as usual. A number of demonstrators in Ni’lin suffered from tear gas inhalation, while several small fires erupted after tear gas canisters landed in the fields of the village. In Bil’in, the demonstration — which also referenced the FIFA vote — was also suppressed with large amounts of tear gas.

Thanks to Sarit Michaeli for the report from Ni’lin for this story.