Hundreds of people from across the country, including artists and politicians, converge in Dahmash for a show of solidarity with the unrecognized village whose fate will likely be determined by the High Court.

It took us over an hour to find the cultural event in the unrecognized village Dahmash on Saturday. Aside from a dirt road, there are no signs leading the way to the village, home to approximately 500 people. I suppose that’s the paradox of looking for an unrecognized place.

It is not entirely accurate to call Dahmash “unrecognized.” The state authorities know the place well, despite the fact that they do not provide its residents the most basic serves, such as electricity or sewage connections. The dirt road, used by bulldozers on their way to destroy homes, is well-known to the authorities. The state knows about Dahmash, but refuses to recognize it, despite it being as old as the State of Israel itself. 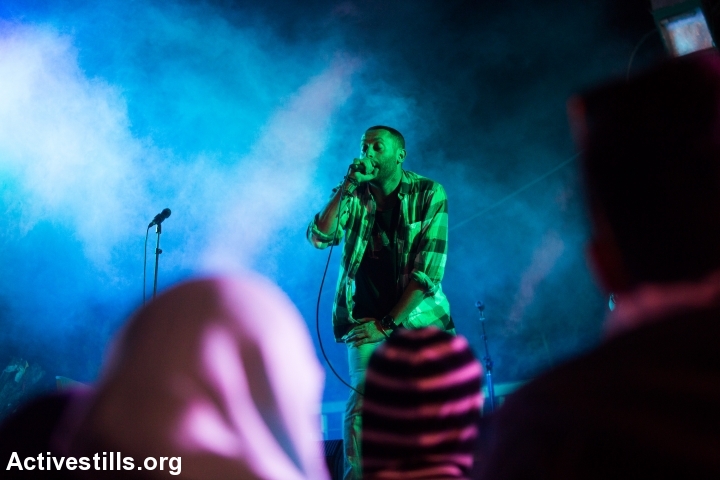 There is no doubt about who owns the land in Dahmash, only over the right to live on that land with dignity. Twenty minutes from Tel Aviv, from the place young people protest in the streets over their right to affordable housing in the heart of satiated Israel, other residents are fighting for recognition. On a piece of land they never stole from anybody, in homes constantly threatened by the specter of demolition.

On Monday, the residents of Dahmash will attend a crucial High Court hearing on the future of their home. In the run-up to the hearing, residents organized a stunning cultural event Saturday night, which included activists, artists, Palestinians and Jews. Hundreds arrived throughout the four-hour event. And despite the tension surrounding the upcoming hearing, the atmosphere was uplifting. In the twilight zone between Ramle and Lyd (“Lod” in Hebrew), stood hundreds of Palestinians and Jews, in a beautiful show of solidarity. 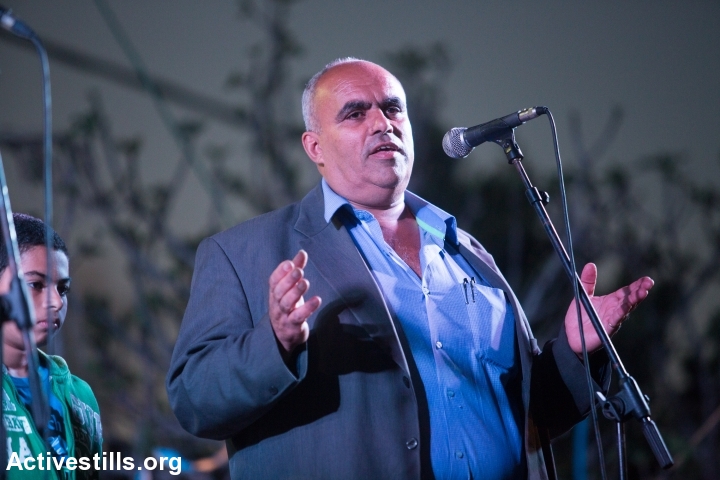 Arafat Ismail, who heads the the village committee, speaks to the crowd during the cultural event in the unrecognized village of Dahmash on March 14, 2015. (Yotam Ronen/Activestills.org)

The evening was hosted by Israeli actor Itay Tiran, who opened the event with the following words:

Whoever isn’t standing here with us to protect these homes from demolition — is a racist. Whoever doesn’t support the right of Dahmash to be recognized supports apartheid, and it doesn’t matter if he is religious or secular, Mizrahi or Ashkenazi, man or woman. A Jewish person who does not support our struggle here is a racist Jew. We, residents of Tel Aviv, took to the streets because they raised our rent. We refused to serve in the occupied territories because we believe in the struggle against the occupation, but we never wanted to understand that the occupation exists 20 minutes from Tel Aviv, as the Nakba crawls before our homes, and we are not lying on the road trying to stop it.

It must be said that for someone who depends on the support of the public for his livelihood, such statements require quite a bit of courage. Israeli artists have been made to publicly apologize for far less. 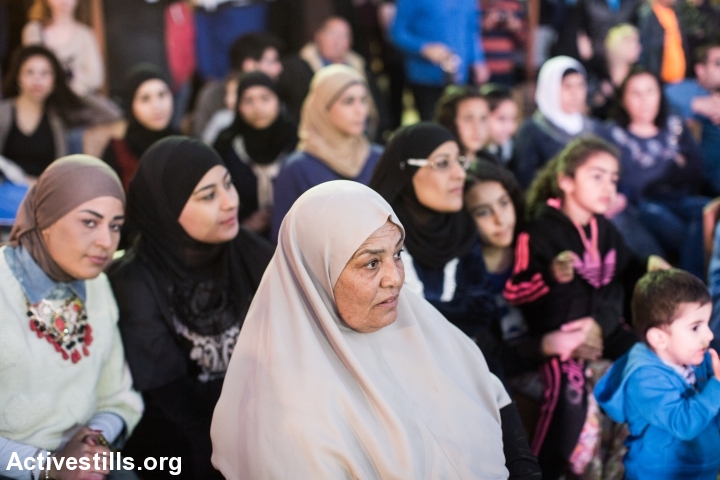 Dahmash exists — very much so. Whether the state recognizes it or not. The question of recognition is a central one for a regime that has sought, from its very beginning, to re-engineer the land on which it exists. This regime denies all those who do not integrate in its violent fantasy, whether they are in Dahmash, Givat Amal or Silwan.

A state that does not recognize its citizens is a sick and dangerous state. Those who do not see the thread that ties together Dahmash, Kfar Shalem and Givat Amal will limit his or her ambitions to merely replace Netanyahu with Herzog and Livni. Those who truly want to live in a society based on equality and justice will understand that the way there passes through Dahmash.

Related:
High Court to rule over fate of unrecognized Palestinian village
Desperation and hope in the eviction of Givat Amal
JNF, settler group seek to evict Palestinian family in Silwan