The death of a 45-year-old woman in Aida Refugee Camp exposes the ongoing abuse of crowd control weapons that all too often become lethal in the hands of Israeli forces. 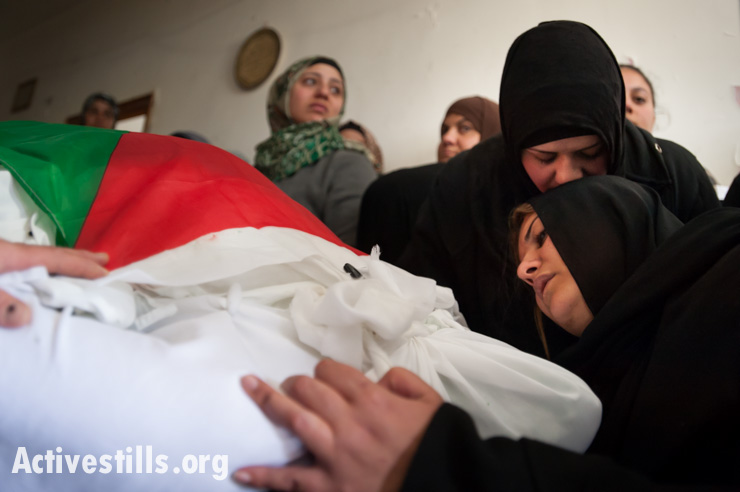 Iman Katamish (right) mourns among family members at the flag-draped body of her mother Noha, Aida Refugee Camp, West Bank, April 15, 2014. Noha Katamish, who had asthma, died from the effects of a tear gas grenade fired into her home by Israeli forces the previous day. (photo: Activestills.org)

Family and neighbors buried Noha Katamish the day after she died from the effects of tear gas fired into her home by Israeli forces in Aida Refugee Camp Monday. The 45-year-old mother of one daughter suffered from asthma, which likely compounded the choking effects of the gas grenade that was fired through her living room window as soldiers invaded the camp.

Ma’an News quoted an Israeli military spokesperson as saying that, “The death was not linked to the use of riot dispersal means by the army, including tear gas.” It is unclear how the military could make such a definitive statement before any investigation was possible.

The military systematically misuses tear gas and other crowd control weapons according to a B’Tselem report, which states that Israeli forces, “often fire tear-gas grenades directly at demonstrators with the aim of hitting them, or fire carelessly, without ensuring that demonstrators are not in the direct line of fire, in direct contravention of regulations.”

The night Katamish died, the military also employed rubber-coated steel bullets, stun grenades and the so-called “skunk truck” which uses a water cannon to spray foul-smelling liquid that leaves a weeks-long stench behind. Many attending the funeral kept their noses covered because of the lingering effects of the skunk water.

The Katamish home is near the top of a hill in the southwest corner of Aida Camp, usually far from the clashes that frequently erupt on the opposite side of the camp at the Israeli separation wall that snakes into Bethlehem in order to surround Rachel’s Tomb. In recent weeks, Israeli forces have been invading deeper into the camp, sometimes making arrests, other times fighting cat-and-mouse battles with camp youth who face rubber-coated steel bullets and even live ammunition with stones and slingshots.

Katamish’s funeral procession brought her body across the camp to the cemetery that would include Rachel’s Tomb if not for the wall. The clashes that often erupt in the adjacent streets are typically in response to events in other parts of Palestine—such as “Operation Pillar of Cloud” that killed 167 Gazans in 2012, or Palestinian deaths at the hands of Israeli forces elsewhere in the West Bank or confrontations with Israeli police at the Al-Aqsa Mosque. Youth typically throw rocks or the occasional Molotov cocktail—though few get close enough for their projectiles to clear the 9-meter (30-foot) wall.

On several occasions in Aida Camp and elsewhere, Israeli snipers have illegally opened fire with live ammunition at stone-throwers, sometimes as a first resort—before any other crowd-control means were employed. Soldiers also frequently enter the camp for arrest raids, house searches or merely to assert their presence—often provoking further clashes.

Katamish is the first fatality from clashes in Aida Camp since January 2013, when Salih Amarin was shot in the head with live ammunition by an Israeli sniper atop the wall at Rachel’s Tomb. Katamish was buried in a tomb next to Amarin.

A recent report by Arutz Sheva cited army sources as saying that since the wall isn’t high enough to protect Rachel’s Tomb, they were considering building a roof over the site. In the meantime, Israeli forces seem to be relying on the systematic abuse of potentially lethal crowd control weapons to pacify the camp, with an ongoing pattern of devastating results. Hasan Katamish holds the tear gas grenade near the window it passed through, causing the death of his sister Noha. (photo: Activestills.org) 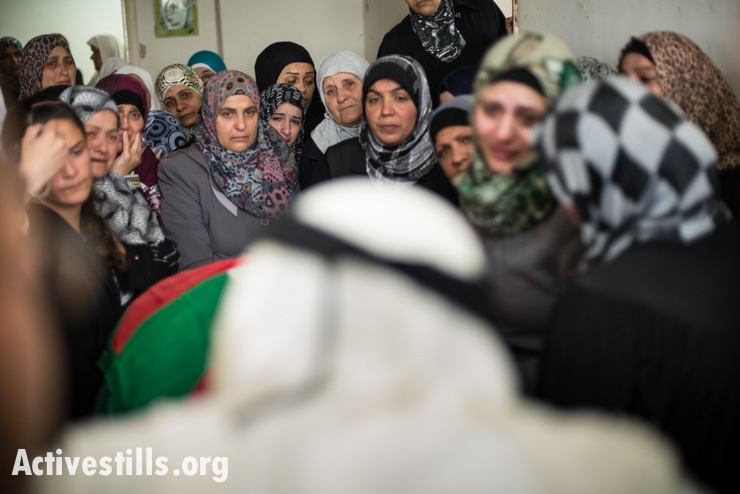 Women mourn as Mohammad Katamish enters the room where the body of his daughter Noha awaits burial. (photo: Activestills.org) 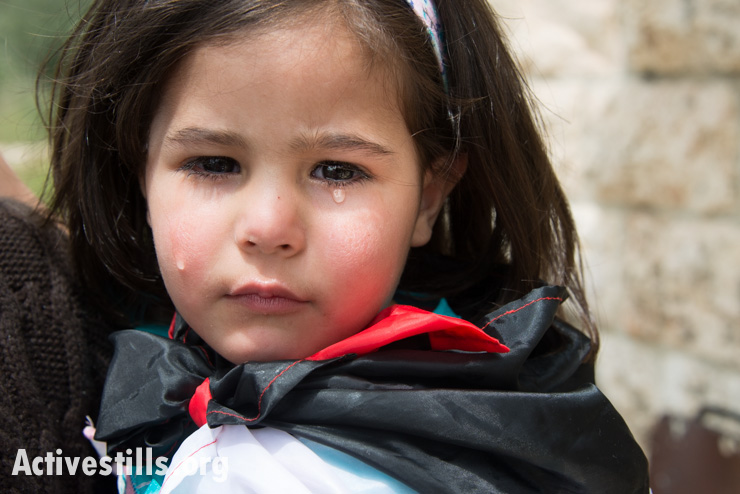 A child relative mourns at the funeral of Noha Katamish. (photo: Activestills.org) 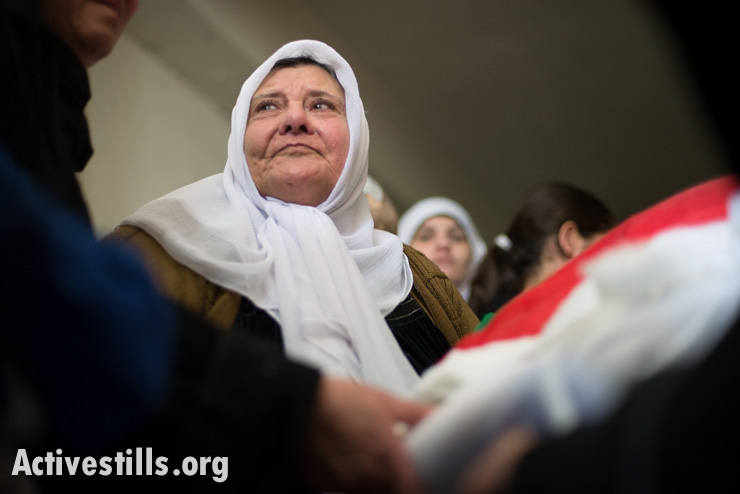 Zahiyya Katamish mourns among family members near the flag-draped body of her daughter Noha. (photo: Activestills.org) 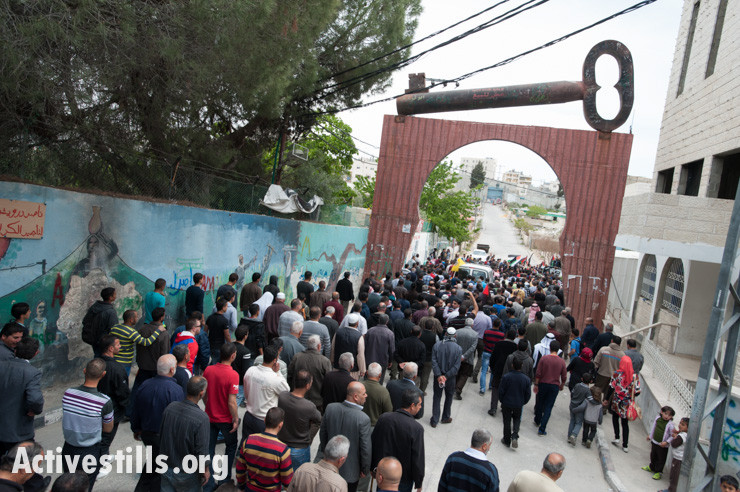 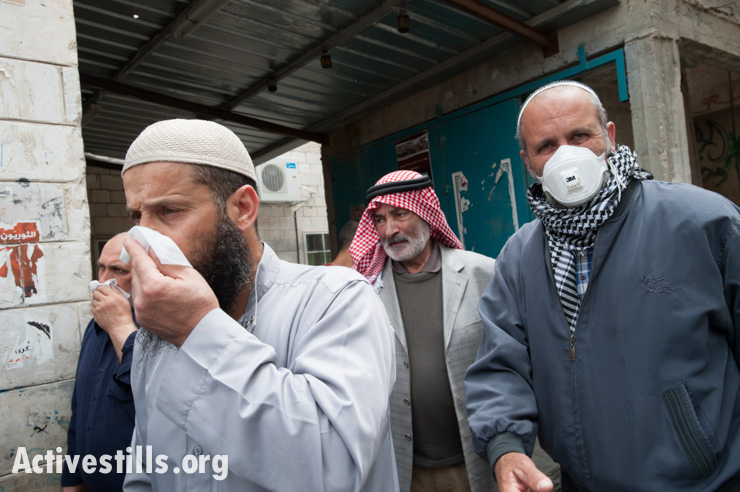 Mourners in the funeral procession of Noha Katamish cover their faces from the effects of “skunk water” sprayed by Israeli forces in Aida Refugee Camp the previous day. “Skunk water” is a foul-smelling liquid sprayed from a water canon as a crowd control weapon that leaves a weeks-long stench. (photo: Activestills.org) 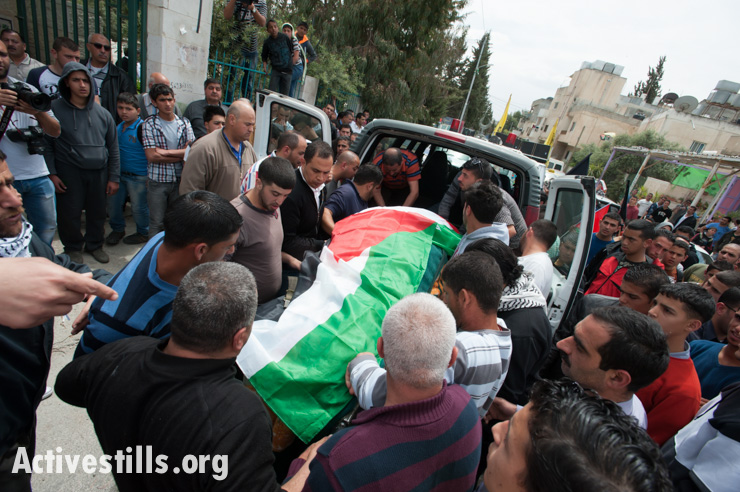 Mourners carry the body of Noha Katamish to the cemetery in Aida Refugee Camp. (photo: Activestills.org) 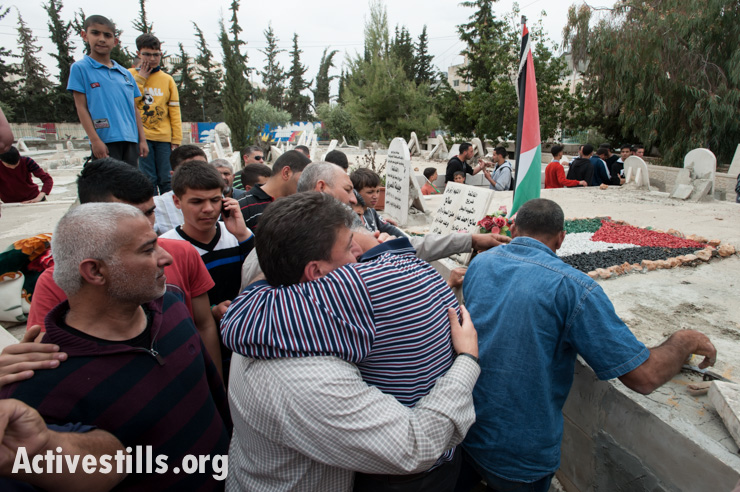 A supporter embraces Hasan Katamish (left) after the burial of his sister Noha in the cemetery in Aida Refugee Camp. (photo: Activestills.org) 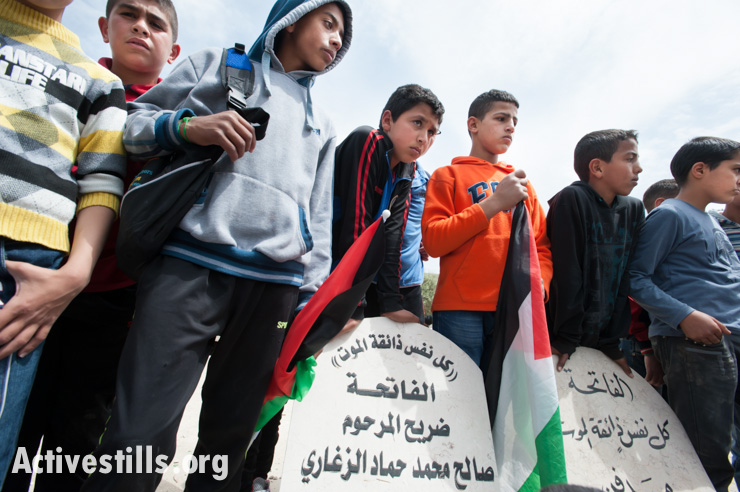 Children attend the funeral of Noha Katamish in the cemetery of Aida Refugee Camp. (photo: Activestills.org) 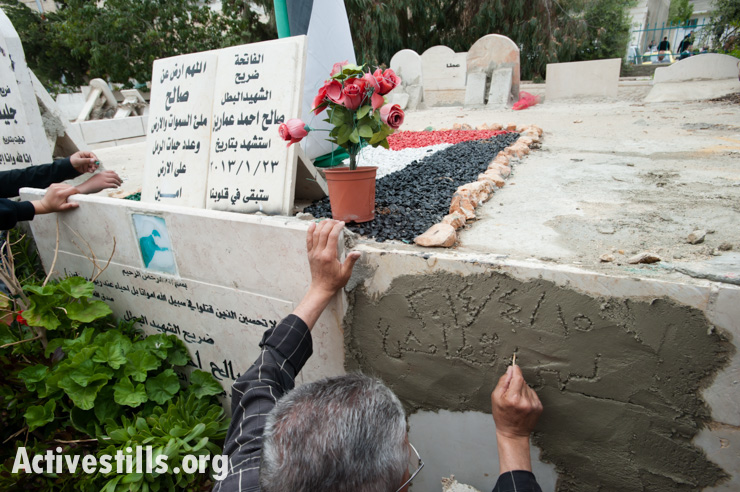 A family member makes a temporary inscription at the tomb of Noha Katamish until a finished grave marker can be placed in the cemetery of Aida Refugee Camp. She was buried next to the grave of Salih Amarin, who was 15 when he was shot in the head and killed by Israeli forces in Aida Refugee Camp in January 2013. (photo: Activestills.org) 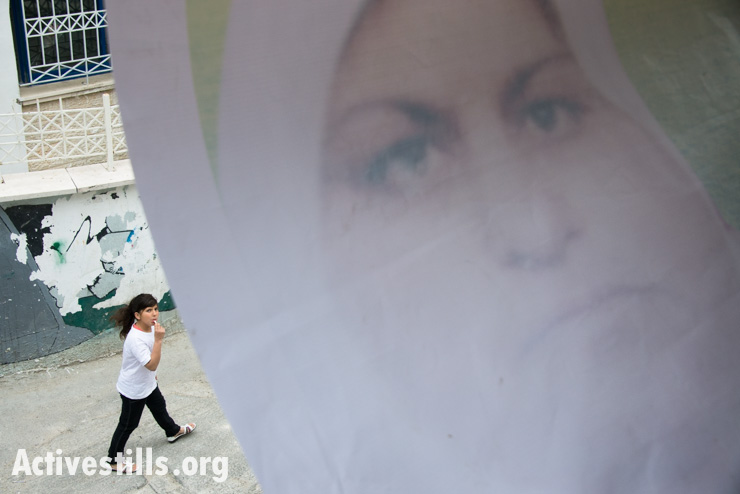 A girl passes a banner bearing an image of Noha Katamish to honor her memory in Aida Refugee Camp. (photo: Activestills.org)

Read more:
Poisoned by tear gas in the comfort of their own home
Elderly Palestinian man dies after alleged tear gas inhalation