A garden of flowers planted in used tear gas grenades memorializes Bassem Abu Rahmah, killed by Israeli forces in 2009 in Bil’in. But recent AP photo coverage looks mostly at the flowers and misses the memorial. 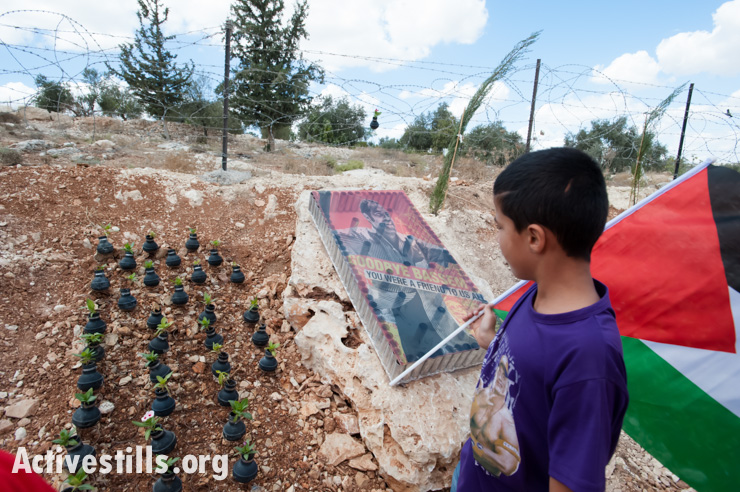 Before a weekly demonstration against the wall, a Palestinian child visits the memorial garden planted on the spot where Bassem Abu Rahmah, in a 2009 protest, was shot and killed with a high-velocity tear gas grenade fired by Israeli soldiers, Bil’in, West Bank, October 4, 2013. The garden’s flowers are planted in used tear gas grenades thrown by Israeli forces in clashes with Palestinians during the weekly protest. (photo: Ryan Rodrick Beiler/Activestills.org)

The act is one of both peaceful resistance and an answer to the separation wall erected by the State of Israel. Residents of the village of Bil’in have created an oasis in the arid landscape of the West Bank, and sown flowers in tear gas canisters which were fired at protesters by Israeli forces. Bassem Abu Rahmah, a protest leader, was killed in 2009 when Israeli forces shot him in the chest with a tear gas grenade. The garden is to commemorate him and other victims in the Palestinians’ fight for their land. 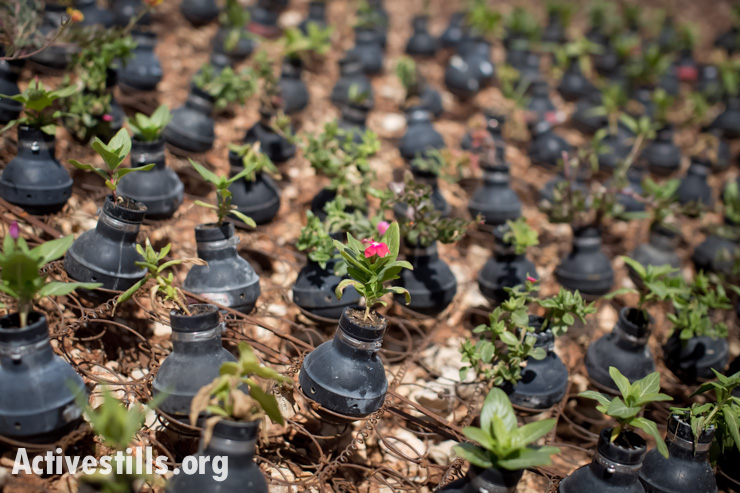 Flowers grow in used tear gas canisters on the sport where Bassem Abu Rahmah was shot and killed with a tear gas grenade fired by Israeli soldiers during a protest against the wall on 2009, in West Bank village of Bil’in, October 4, 2013. (photo: Oren Ziv/Activestills.org)

However, that key context of the garden was missing from the photos in a widely circulated Associated Press photo story. None of the AP photos included the centerpiece of the memorial garden, a translucent photo of Bassem mounted on a frame of spent tear gas shell casings. Moreover, photo captions identified only “A Palestinian woman” watering the garden, failing to mention that it was Sabiha Abu Rahmah, Bassem’s mother. 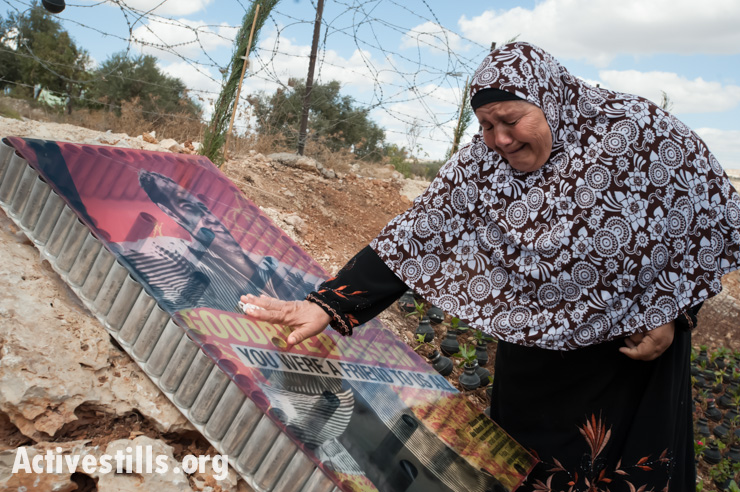 Before a weekly demonstration against the wall, Sabiha Abu Rahmah weeps at the memorial garden planted on the spot where her son, Bassem, in a 2009 protest, was shot and killed with a high-velocity tear gas grenade fired by Israeli soldiers, Bil’in, West Bank, October 4, 2013.

An AP article text that accompanied the photos on many news sites did mention Bassem’s death and that of his sister Jawaher, who is believed to have died because of tear gas inhalation in 2011. But some publications, such as the UK’s Daily Mail, did not include the AP text, instead running a staff writer’s summary of Israel’s word against “critics” regarding the separation wall.

On Ynet‘s version, not only is there no mention of the Abu Rahmah deaths as the reason for the memorial garden, but their concluding sentence further obfuscates the price of Bilin’s resistance: “Every Friday, Palestinian and Israeli leftist activists come to protest the separation fence at the site, and several of these demonstrations have ended in injuries.” Who injures whom and how badly is left to the reader’s imagination. 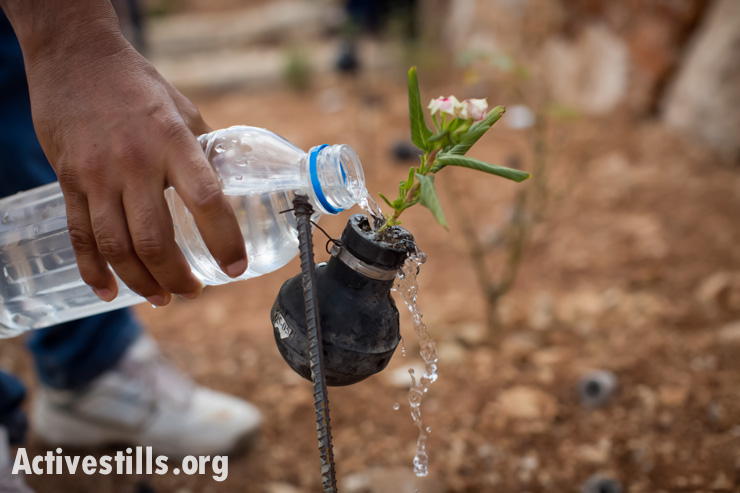 A Palestinian man waters flowers planted in used tear gas grenades on the sport where Israeli soldiers shot and killed Bassem Abu Rahmah with a tear gas grenade to the chest during a protest against the wall on 2009, in West Bank village of Bil’in, October 4, 2013. (photo: Oren Ziv/Activestills.org)

In addition to memorializing the Abu Rahma family’s losses, the eclectic potted plants also mark land that Palestine was able to reclaim two years ago through a protracted court battle that finally re-routed Israel’s wall.

Residents of Bilin say 60 percent of their farmland was cut off by the Israeli separation wall. Since 2005, villagers have been going out almost every Friday for anti-wall protests, which often result in violent crackdowns by Israeli forces. Bilin has become a symbol of Palestinian protests against Israeli policies in the West Bank, and the village’s struggle to regain its land became the subject of a 2012 Oscar-nominated documentary Five Broken Cameras. 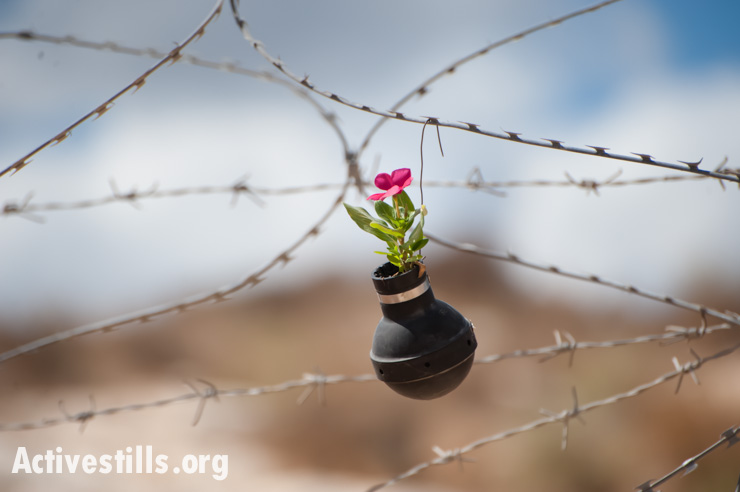 A flower growing from a tear gas grenade hangs from razor wire near a memorial garden on the spot where, in a 2009 demonstration in the West Bank village of Bil’in, Bassem Abu Rahmah was shot and killed with a high-velocity tear gas grenade fired by Israeli soldiers, Bil’in, West Bank, October 4, 2013. (photo: Ryan Rodrick Beiler/Activestills.org)

Since the Israeli regime began building the separation wall in 2002, the route has been the target of regular protests waged by residents of various towns whose land is threatened by or has already been cut off by the barrier. What many outside the Palestinian community misunderstand is how the Israeli government has effectively confiscated large plots of Palestinian land in order to erect the barrier. When the 435-mile barrier is complete, 85 percent of it will have been built inside the West Bank, rather than on the internationally recognized Green Line between the State of Israel and the occupied Palestinian territories. The result is that the wall does not simply divide “Israel from the West Bank” as is often stated, but rather Palestinian land from Palestinian land, dividing farmers from their land, children from schools, and families from each other.

Read about Palestinians who are stuck in between the separation wall and the Green Line.

Related:
IDF closes investigation into Bil’in killing without indictment
The questions people don’t ask about ‘staged photojournalism’
‘5 Broken Cameras’ director: There is no room for guilt – only taking responsibility