Dozens of Israeli, Palestinian and international activists protested in the Old City and Sheikh Jarrah against the Judaization of Jerusalem. The police, however, didn’t take kindly to their expressions of free speech. Israeli, Palestinian and international activists gathered at Damascus Gate in Jerusalem’s Old City Friday afternoon, before marching to the neighborhood of Sheikh Jarrah in order to protest the Judaization of East Jerusalem.

The march came amid increased tensions over the attempt by Jewish settlers to take over property in Palestinian areas of the city, following the attempted eviction of the Sub Laban family from their home in the Muslim Quarter of the Old City. The most recent attempt on March 15 failed, thanks to the presence of Palestinian and Israeli activists who went to the Sub Labans’ home to try and prevent them from being forced out. The threat of eviction, however, remains.

The crowd, which included individuals from the Sheikh Jarrah Solidarity movement and Women in Black, began to move away from Damascus Gate, holding signs calling for the end to the occupation and settlements in East Jerusalem, while accompanied by drumming and chanting. Members of the Shamasneh and Sub Laban families speak during a protest against the Judaization of Sheikh Jarrah, East Jerusalem, March 27, 2015. (photo: Mareike Lauken, Keren Manor/Activestills.org)

The police immediately approached and informed demonstrators that it was illegal for them to carry their signs (without explaining why), and as the march made its way up Nablus Road in the direction of Sheikh Jarrah, they began confiscating signs one by one. Those who attempted to hold onto their signs — including elderly women — were manhandled by the police. One Palestinian who passed by the demonstration even shouted at the police about freedom of expression and questioned what kind of a democracy engages in such behavior. 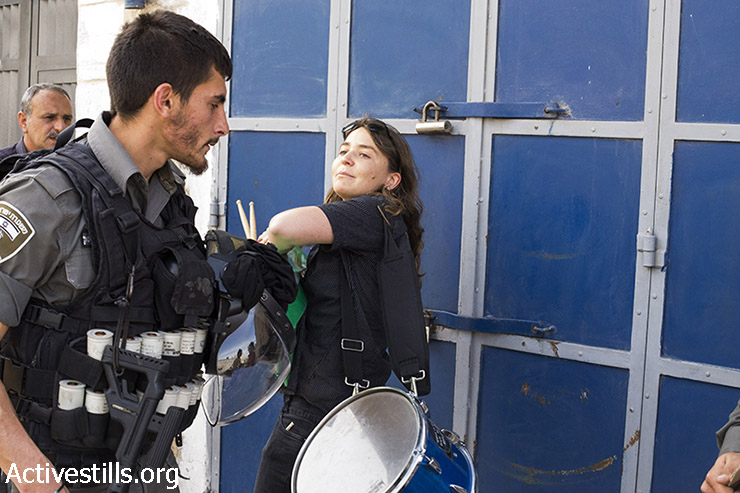 An Israeli policeman confronts an Israeli demonstrator during a march against the Judaization in the East Jerusalem neighborhood of Sheikh Jarrah, East Jerusalem, March 27, 2015. (photo: Mareike Lauken, Keren Manor/Activestills.org)

The march continued — with the majority of signs confiscated — escorted by two Border Police on horseback, Jerusalem Police on foot and a Border Police patrol car. After pausing briefly at the entrance to Sheikh Jarrah, where more police cars arrived, the procession descended into the neighborhood, where protesters met with several members of the Shamasneh and Sub Laban families, both of which face eviction. They explained their plight and thanked the demonstrators for their solidarity. One of the speakers pointed out that if the police wanted to confiscate signs, that was their problem — he would bring a thousand more.

The march carried on to the outskirts of Sheikh Jarrah, where the police again began assaulting demonstrators holding signs that had not yet been confiscated. Several scuffles broke out as police officers continued to snatch signs and tear them up, as well as attempting to confiscate people’s drums. Eventually, however, the drumming started up again, and some of the signs were returned to demonstrators who held them at the edge of the pavement, facing the traffic. It seemed that the entire performance was simply a show of force on the part of Israeli security — against an unarmed, peaceful crowd, which counted children and the elderly among its numbers. 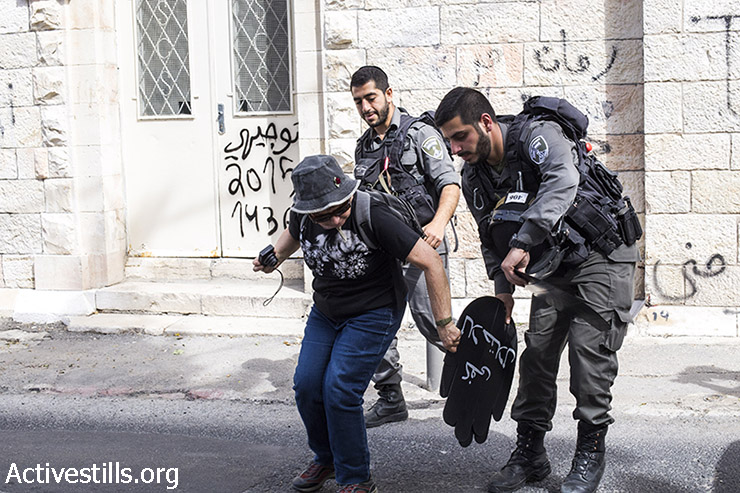 And Israeli policemen confiscates a sign from a protester during a demonstration against the Judaization of Sheikh Jarrah, East Jerusalem, March 27, 2015. (photo: Mareike Lauken, Keren Manor/Activestills.org)

As the protest drew to an end, members of the two families again thanked the participants and reminded them that the battle to save their homes is ongoing. There was just enough time for one final opinion to be expressed: a car driving past the group slowed, the window opened, and a young Israeli eyeballed the crowd, while putting up his middle finger. And so, another Friday in Sheikh Jarrah came to a close.

Related:
Palestinian family under threat of eviction by settlers
The occupation doesn’t take a day off for elections in E. J’lem