The Israeli army decided last week to close the main gateway Palestinian farmers from four villages use to access their lands — which Israel cut them off from with the separation fence. After a protest the army re-opened the gate, but the incident shows how Israel controls every aspect of Palestinian life. 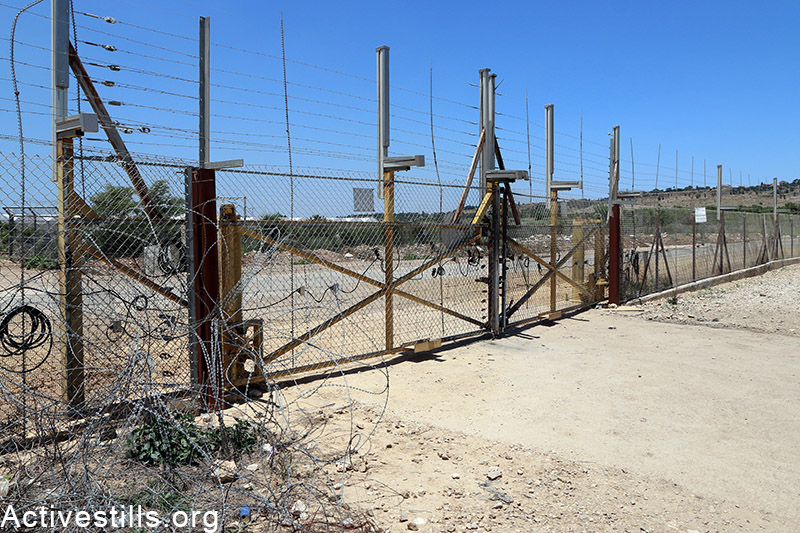 A view of an agricultural gate in the separation fence near Falamya village (Gate number 914), West Bank, May 17, 2015. Ahmad al-Bazz / Activestills.org

Since Israeli started building its separation barrier in the West Bank, Palestinian farmers living along the fence have been cut off from their agricultural lands t

When Israel started building its separation wall and fence through the West Bank over a decade ago, the route it chose cut many Palestinian farmers off from their lands. As a result of legal appeals and other arrangements, the army built gates in the fence and wall through which it permits the farmers to reach their lands on certain days and during certain hours.

Read also: A journey into the dark heart of Israel’s permit regime

Last week, the Israeli army’s Civil Administration, the military government in the West Bank, informed Palestinian farmers from four West Bank villages — Kafr Jammal, Kafr Zibad, Kafr Abbus and Kafr Sur — that the gate they use to reach their lands, which lie on the other side of the fence.

In order to reach their lands, the army told the farmers that they would have to use another gate near the village of Jayyous, about 15 kilometers from their usual gate near the village of Falamya. Some of the farmers told Activestills they believed the decision was the beginning of an attempt to confiscate their land. Israeli authorities often exploit an Ottoman law that permits the state to confiscate land that hasn’t been cultivated for a number of years. 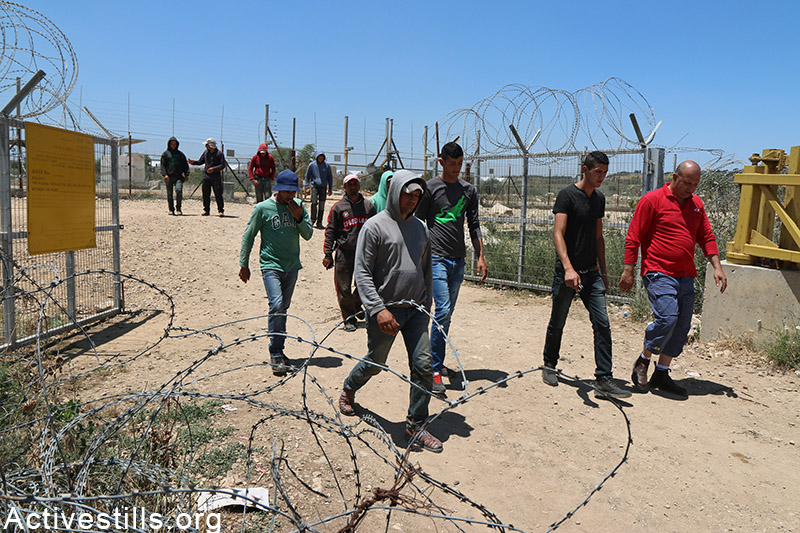 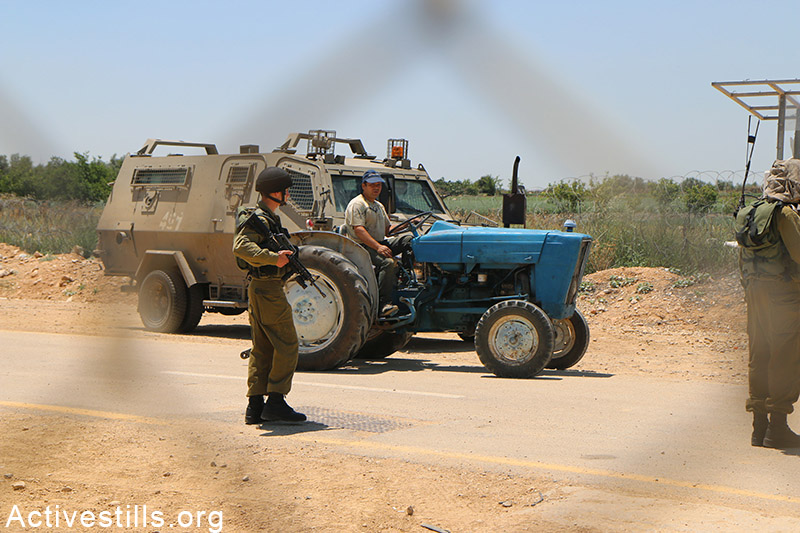 Palestinian farmer drives his tractor on the western side of the separation fence in Falamya village, West Bank, May 17, 2015. Ahmad al-Bazz / Activestills.org

At 6 a.m. on Sunday the farmers arrived at their usual gate near Falamya, the gate their were told would be closed. They staged a demonstration demanding that the gate be re-opened.

Following the protest, the army decided to re-open the gate, saying that the closure was a pilot program, which was scrapped in light of the residents’ protests.

On a normal day, Israeli soldiers open the gate at 6 a.m. to let the farmers access their lands and reopen it at noon, allowing them to come back. Sometimes, when the farmers finish their work early, they have to wait for hours until the soldiers come to open the gate. 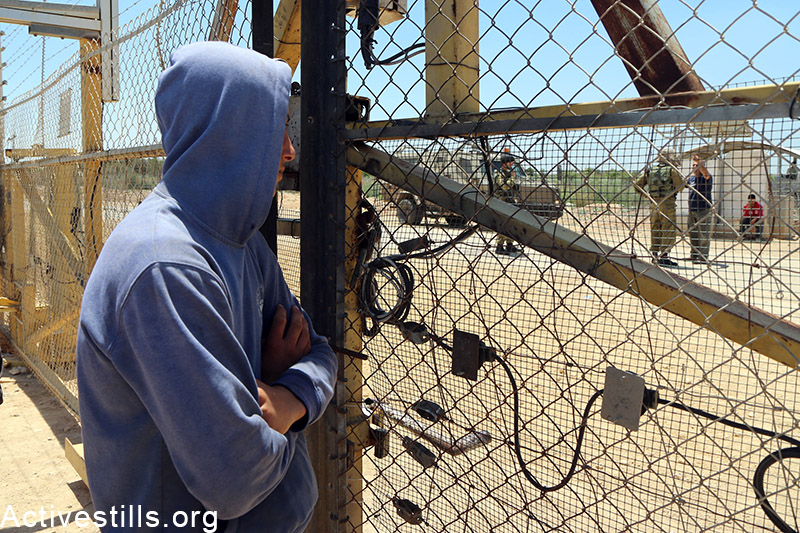 The International Court of Justice has published its opinion that the route of the wall is illegal and called on Israel to cease construction of it. Israel claimed at the time that the route was temporary and did not constitute a change to the Green Line or attempted annexation.

The route of the separation fence/wall, however, does not follow the 1949 Green Line, which most of the world recognizes as the interim border between Israel and the West Bank. It snakes through the Palestinian territory and Israeli officials have even admitted that it is intended to be a future border, which would constitute illegal annexation.

Further, Palestinians whose privately owned land lies trapped on the other side of the separation barrier but still within the West Bank — the seam zone — must obtain permits from the Israeli Civil Administration. Often times such permits are arbitrarily denied, and are often used as leverage — one of many ways that Israel maintains its undemocratic control over the occupied population of Palestinians. 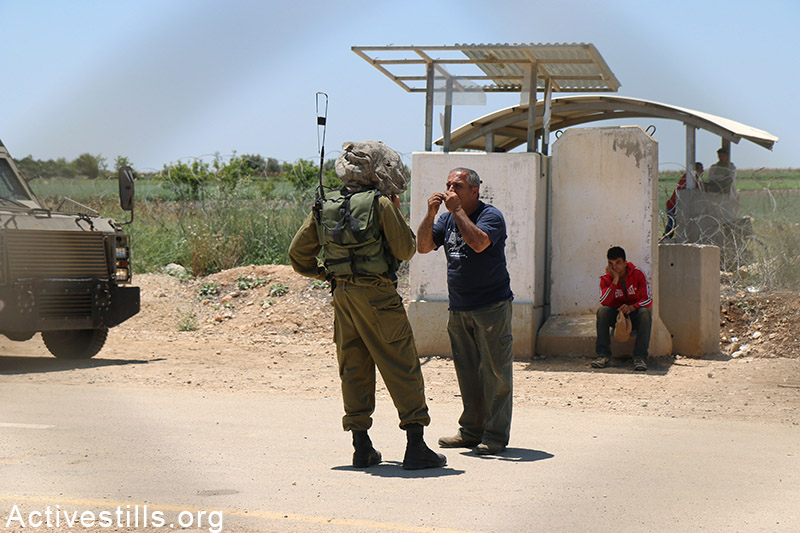 A Palestinian farmer argues with an Israeli soldier on the western side of the separation fence in Falamya village, West Bank, May 17, 2015. Ahmad al-Bazz / Activestills.org