New database will allow immediate access by security forces, without court order, to the face scan and finger prints of every Israeli. 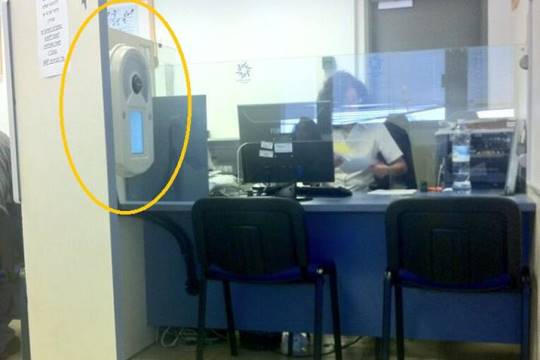 A machine for the collection biometric information at an Israeli Interior Ministry branch in Haifa (photo: michtzi1)

After several delays, the Interior Ministry on Monday will commence the two-year pilot stage of Israel’s National Biometric Database Program. When completed, the database will include the biometric information – a face scan and fingerprints – of all Israeli citizens, accessible without court order to the police and security forces, including the army, the military police and the Shin Bet (Israel Security Agency). In addition, a court could also order the transfer of individual biometric information, and even the entire database, to other agencies and even to foreign bodies.

The database was an initiative of the security forces. The legislative effort, which was led my MK Meir Shitrit from Tzipi Livni’s Tnua party, was met with heavy criticism from the opposition and human rights groups, that warned of possible abuses of the power the database puts in the hands of authorities and of leaks that could see the information end up in the wrong hands. Most of the Interior Ministry’s current registration of Israeli citizens has already leaked to the Internet.

The government claimed that the database is needed in order to prevent the forging of Israeli ID cards and passports. However, critics point to the fact that the government could issue “Smart IDs,” which themselves store biometric data, without keeping the personal records in one national database.

>  Opinion: The new biometric database is a threat to the privacy and freedom of every Israeli / Atty. Jonathan J. Klinger

Due to public criticism, the plan to force all citizens to submit their biometric information and receive new identity cards was replaced with a two-year pilot, in which the public’s reaction and the database’s security will be tested. During that time, Israelis who seek to renew their ID or Passport will be offered to submit their biometric information and receive the new “Smart IDs.” Hewlett-Packard was the contractor chosen to provide the hardware for the program.

Former Minister Micky Eitan (Likud) has called the public to refuse the pilot. The Association for Civil Rights in Israel and several members of Knesset also called on citizens not to give their biometric information to the authorities.

In the margins of the national controversy over the database, an embarrassing incident occurred to Finance Minister Yair Lapid last month. Lapid was asked on a Facebook chat with supporters why he changed his views on the database (from opposing to supporting it). In response, he asked the person who posted the question “to take a flashlight” and begin searching for “a single statement” in which Lapid said something against the database. Soon after, several people posted a Q&A from the latest campaign in which the Yesh Atid party opposed the database.

Yesh Atid is part of the coalition which now backs the database.