Eyewitnesses say Border Police officers attacked an Arab worker in central Tel Aviv after he allegedly refused to show them his identity card. Police: The suspect refused to identify himself and attacked the police officers, biting one of them. 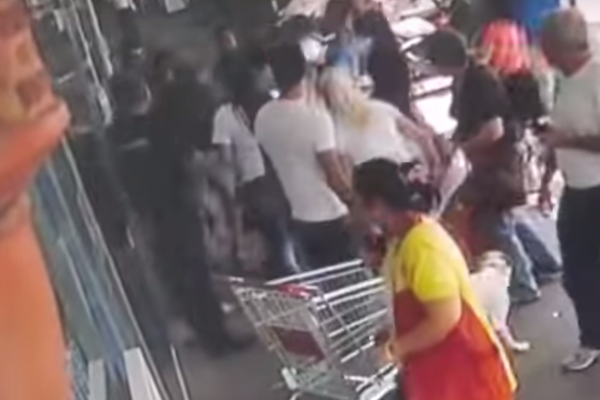 An Arab employee of a supermarket located on the main thoroughfare of Ibn Gvirol Street, opposite Tel Aviv’s Rabin Square, was reportedly beaten by plainclothes Border Police officers on Sunday afternoon. According to several eyewitnesses, the motive behind the beating was the employee’s ethnicity.

While it is still unclear what exactly happened, we do have several eyewitnesses who posted statuses on Facebook, one of whom spoke to +972, as well as a report published by Israeli news sites, among them Walla! . According to these sources,  an employee of Yuda Market, a mini-market, went out to dispose of some garbage, when he was approached by a plainclothes officer who, without identifying himself, demanded to see the man’s identity card. When the employee said his I.D. card was inside the store and asked the Border Police officer to identify himself, he and a friend began beating him. More officers and other citizens quickly joined in. The video published by Walla! shows there were numerous people involved in the assault.

This is an excerpt from the Facebook status of Erez Krispin, one of the eyewitnesses:

[It was] the kind of beating you never see in real life. Teeth are flying, the Arab is beaten to a pulp. An elderly woman asks them what they are doing and they yell at her to fuck off before they finish her off as well (while witnesses are standing around), the police arrive and join in on the beating. Everything, including cursing at the elderly woman, takes place while bystanders are watching. I have no idea if the Arab man is alive. They pushed whatever was left of him into the police car, not an ambulance, and disappeared. Later on it emerged that the two men were Border Police officers (who never identified themselves, of course).

“His only sin was that he’s not a Jew,” said Kobi Cohen, the owner of the supermarket, to a reporter from Walla! News. +972 has tried to contact Cohen for comment but he has not yet responded.

“Due to the wave of terror, and in general as part of internal security activities, Israeli police are working tirelessly to find and expel Palestinians who don’t have work permits, for the security of the public. Based on an initial investigation, it seems that Border Police officer recognized a young man who aroused their suspicion, and they asked him to identify himself. The suspect refused to identify himself and attacked the police officers, even biting one of them. In order to arrest him, the policemen had to use force while the suspect continued attacking them.”

“As a result of the intensity of the violence against them, the two police officers sought medical assistance at Ichilov Hospital, after suffering bruises and bite marks. In coordination with police protocol, and as is acceptable in situations in which police must use force in order to do their job, all relevant materials will be sent to the Department of Internal Investigations. Israeli police will continue to act decisively against anyone who threatens Israeli lives.”

The police response does not confirm or deny the fact that the man is, according to his employer, an Israeli citizen, a Bedouin from a Negev town. This would counter the claim that he was a Palestinian without a work permit Given the number of people seen in the video beating this one man, it is not surprising that some of the policemen were bruised in the fracas.

According to a local Palestinian media outlet, his name is Maysam Abu-Alqi’an. He was reportedly treated at Ichilov hospital, Sunday evening.

Joint List Chairman Ayman Odeh responded to the incident, saying that “Instead of serving and protecting Arab citizens, the police presents a genuine danger to their safety.”

MK Dov Khenin, also of the Joint List, said he has turned to the Minister of Public Security with an urgent request to clarify what happened. Khenin said, “from the looks of it, this appears to be a lynch in broad daylight, an assault on an innocent citizen by police, just because he is Arab.” He went on to say this is part of a broad trend: “A direct line links Prime Minister Netanyahu’s incitement on election day about the ‘Arabs moving in droves,’ and phenomena like the murdering soldier in Hebron or the ugly attack that happened today in Tel Aviv.”