I ask this as an Israeli, who is trying to make Israel a better place, who served his country, and continues to struggle for a better society, for peace, for human rights and civil equality. Please, don’t send your children to Birthright Israel (“Taglit”), The Israeli Experience, or any similar project. 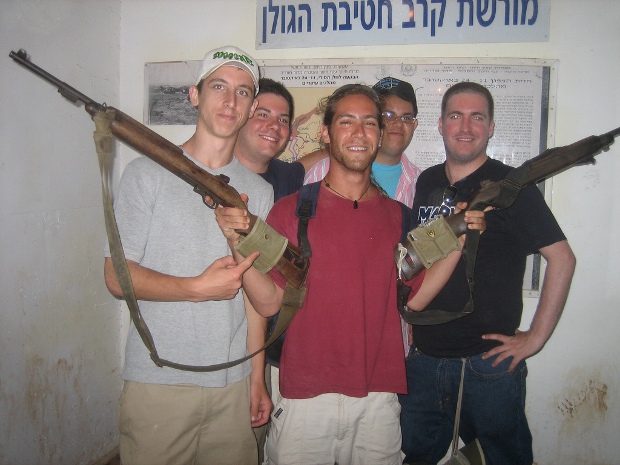 I am certain that those of you considering this step have nothing but the best intentions, and that you have a high regard for Israel and us Israelis. I am writing this text however to bring to your attention information about these projects that might not have been available to you. I wish to show you what these projects really do, and why they do it. These programs may have some positive sides, but on the whole, I am afraid they are very negative and highly destructive.

The first thing that needs to be said out loud, and I put this upfront because I believe that some of you simply don’t know this, is that ‘Taglit’ is a political project, with militant and militaristic undertones. Think about it, would you send your teenage child to summer camp, if it was run by acting military officers inside an army facility? I am guessing that most of you would be rather suspicious of the aims of such a camp – quite justifiably so. Birthright, by invoking a sense of emergency, conveys the implicit message that whatever happens in Israel- without question- is a true emergency, and through this sense of urgency pressurizes your child into becoming a Yes-Man to any policy, present or future, with no discussion, argument or thought. It dangerously portray us as always right, no matter what. As an Israeli, I am deeply perturbed to admit that such programs do succeed in casting many young Jews into the impossible and unfair role of loyal advocates for Israel. By telling these youngsters that ‘they are Israel’ they are manipulated into giving up individual identity – that is, an individual that judges for her/himself what is good and bad in Israel’s affairs – and instead are encouraged to accept and support Israeli policy unconditionally. To give up one’s individual critical faculty is very problematic, to say the least. Israeli politicians and generals are only human, they make mistakes like the rest of us, and like the rest of us, they should be held accountable for their errors. By having been given such blind and unconditional trust and support for so long, it has become almost impossible for concerned Israelis to voice earnest and loving criticism of Israel without being silenced.

Its not just about Birthright-style projects and the youth though. Millions of Jews, from countries outside of my own, consider themselves ‘pro-Israel’, and I know that they have the best intentions towards me as an Israeli. However, I often find that this picture they have of Israel (and me) is a mere construct. Its an abstract image, or a collage of well known Israeli figures and institutions like the Kibbutz, the army, holy places, the dead-sea, some news-feeds, and maybe a few relatives. This image is not however the Israel in which people live their everyday lives and struggles. The Birthright experience is not the ‘Israeli experience’ of an Israeli. The Israel many of them carry in their heads is a myth, just like I probably have a mythical image of New York (which, sadly enough, I’ve never visited).

For some, this construct is also the Israel they think of immigrating to in case of a catastrophe, which may or may not also be completely imaginary. I know that most of you come with a sincere desire to protect what you believe is a safe-haven, and like any protective parent, you sometimes feel that Israel is under fire for no good reason. Well, maybe you’re right sometimes. Yet, being an overprotective parent can also be very harmful. You see, for me Israel is a real country. We, the people who actually live here, make many real mistakes. Just like you probably do sometimes. Israeli society is not perfect, and like many other societies, it is not particularly willing to welcome criticism (and it seems we also have problems with independent thinking, as most Israelis report believing the Military Spokesman more than any journalist). Giving us powerful and unconditional ideological and financial support only makes us regard our errors as legitimate, and makes them more frequent.

As a Jew, I am sad to say that the more racist and militant Israel becomes, it is well meaning Jews around the world who more often than not press harder to keep discussion of Israeli policy taboo, to keep it a sacred and untouchable topic. Israeli policy is being portrayed as always and forever the ultimate expression of justice. I know that Islam regards prophets as infallible, but according to Judaism, even prophets err. So how can Israel, which is a man-made (secular) entity, be regarded as pure of any fault? Is it to be elevated to the degree of sanctity reserved for God alone? Are we building here a new golden calf?

Save the “Safe” Haven

Living in real Israel gives one a slightly different perspective on things. As Jews we are used to thinking of Israel as the country of every Jew, at least potentially. For those who are not Israeli at the moment, Israel is always an option to be kept open. It is an escape plan for times of disaster. It is kept as a possible solution to the constant threat above us. Wherever Anti-Semitism may raise its ugly head again, Israel will be there as a sanctuary. This has come to be like a belief in a prophecy, and as such, it may eventually fulfill itself.

But now, I ask you to think about this idea for a moment. Let’s start from the end. The vision of a safe-haven tries, on the one hand, to foresee the future, actually the worst possible future scenario, and then on the other hand to resolve it by preparing a plan. The plan is building an island in the middle of the Middle East (armed head to toe). In all honesty, I ask you, what is so safe about it? Who was it really who thought of the Middle East as a safe anything to begin with? Weren’t they watching the news? Because, in reality, Israel is probably the least safe place for Jews to be in the entire world.

But more relevant for us Israelis, is that this idea is not really fair. It is favoring visions of the future over our present realities. It offers you, our fellow Jews living around the world, a crazy bargain, which goes something like this: All Jews, wherever they are, are entitled at any moment, to choose to immigrate to Israel and become citizens. We Israelis are expected to ask no questions, provide benefits and voting rights, and all for the ‘symbolic’ price of taking part in the never-ending war. The truth of the matter is, that for someone born Israeli, whose sole language is Hebrew, and who has no other citizenship (i.e. most Israelis), this package is rather unfair. Think about it, Jews living in the rest of the world, usually live in the West, and are often able to live peaceful and fairly comfortable lives. At the same time, we Israelis are subjected to a futureless struggle against racism and hate, and we pay taxes to support the constant war (and oppression of millions), which we also are expected to die in. So while some of you fellow Jews can enjoy a fairly good level of living, and a unilateral right to immigrate from your country to ours at any time, we live in an expensive and unstable war zone, with no safe-haven to escape to, no possibility to immigrate, and no way to influence your politics. So wait a minute, what about us? Don’t we also deserve to live comfortably and securely? Why should we be played like puppets in a show of someone else’s safe-haven – but our home? Don’t we have the right to be supported for criticizing our governments? Who is looking after our safe-haven?

Anti-Semitism may indeed rise again, and it may not. You may come and live here, but most probably you won’t even visit. In the meantime, our actual lives here are affected by your well intended but misguided bear hug. Therefore, I ask you to exchange this deal with a new one: I won’t send my kids to projects run by your government to teach them why your wars are so just, and you won’t send yours to Birthright Israel and other Israeli propaganda projects.

Because it is places like this, where all these ‘Birthrights’ kick in. Every time some of us Israelis are prepared to make political concessions, and are willing to acknowledge our historical wrong-doings, to work to fix the faulty nature of our country, countless propaganda projects supported by Jewish organizations from other countries suddenly appear. These help eradicate the possibility of necessary criticism. Birthright is cynically using young people’s need for a collective identity symbol. It presses the buttons of fear abroad to serve the concrete political aims of the ultra-nationalists, in my home. These projects, which have vast resources from the state, the Jewish Agency, benefactors and participants, serve the most militant actors in Jewish Israeli society. This is the sector that bags for more cannon fodder, for unconditionally supportive ambassadors, for immigrants to join the baby-count race (aka ‘the demographic balance’), that looks for funding of wars and settlements. They can do all this without being asked to give an account, a feasible plan, or even any direction. And this has been happening for dozens of years creating cumulative long-term damage.

So, please, before sending your child to this manipulative summer camp, which is nothing more than one big brainwash by the Israeli army, my army, please take a look at this extract from the excellent documentary by Mor Loushy. She is an Israeli that accompanied an entire Birthright sub-project of teenagers, who were sent to Israel ahead of your children.

Oh, and thank you.

Eyal Clyne blogs at Truth from Eretz Israel in Hebrew and in English. This post was translated from Hebrew by Hava Oz.