The Israeli leadership wants to hold on to the status-quo, the Palestinian leadership is split, and the US discovers the limits of its power. Under these circumstances, the problem is not the lack of solutions for the Israeli-Palestinian conflict, but the absence of political forces that could implement them. A response to Bernard Avishai 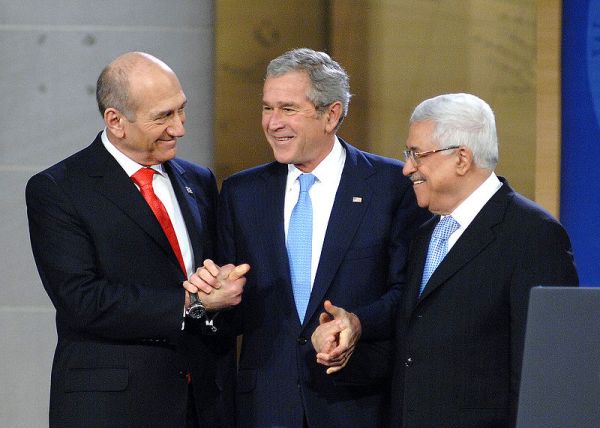 Olmert, Abbas and Bush at the opening of the Annapolis talks (U.S. Navy photo by Gin Kai)

Some 20 years ago, just before I started my mandatory service in the IDF, I remember reading “No Trumpets, No Drums” by Sari Nusseibeh & Mark Heller. The Israeli and Palestinian authors of the book conducted negotiations for several months, leading to the outline of the two-state solution described in the book. At the time, the idea of a Palestinian state was still a taboo for most of the Israeli public, even in the Left, and I still remember going through the book and realizing that there might, after all, be a solution to what used to be called “the Palestinian problem.”

Reading Bernard Avishai’s excellent piece on the negotiations between Olmert and Abbas in this week’s edition of the New York Times Magazine, I couldn’t help remembering “No Trumpets, No Drums.” The similarities between the agreement Nusseibeh and Heller reached and the ideas discussed by the Israeli Prime Minister and the Palestinian president were striking, only this time they didn’t bring any sense of hope with them.

Another memory: Recently, I attended a public peace conference hosted by an Israeli-Palestinian NGO. Between the formal debates, I had a few conversations with representatives of different peace groups. Over dinner, one of them told me of a peace plan he came up with. “It’s not that different from the Geneva Initiative,” he admitted, “only with a few modifications.” A businessman I met was working on establishing an Israeli-Palestinian civilian think tank. His goal: To come up with a plan for a two-state solution…

In recent years, I have also met plenty out-of-the-box thinkers: People proposing a formula for a Palestinian-Israeli confederation; those who dream of abolishing national borders in the Middle East; and even a guy who claims that the Palestinians are the lost Jewish tribes, and therefore, see no reason for the conflict. All we need, he told me, is to explain this to people.

In short, there is no shortage of solutions (and it’s not surprising the serious ones look quite similar). The more the situation on the ground deteriorates, the more plans people come up with. I guess it’s only natural, and I don’t want to dismiss this tendency altogether. Ideas are important. They show people that the current trends can change, and they can lead to political action. The problem, I think, is that in recent years, all these plans and ideas replaced politics, and therefore, became counter-productive.

Many people looked at the failed Annapolis process as a missed opportunity, a version of the “generous offer” narrative used to describe the Camp David summit in 2000. Look how close the two sides are, these people say. If only the administration was more engaged we could have had an agreement. If only the war in Gaza didn’t break out. If only Ehud Olmert stayed in power.

But wasn’t the war evidence to the fact that it’s impossible to sign an agreement with only half the Palestinian Authority, and leave Gaza out of the process? And didn’t the result of the Israeli elections prove that the public prefers Netanyahu’s rejectionism to Kadima’s two-state platform? Couldn’t the failure to reach an agreement serve as proof that at least one of the parties – if not both – find the negotiation’s outcome impossible to live with, or simply impractical?

I believe that the problem is not the absence of a plan, but that of a leadership which is able to carry it out. Olmert went further than any Israeli leader, but he still didn’t come close to the minimum the Palestinians could have lived with (the reaction to the Palestine Papers reveals how far behind from its leadership was the Palestinian public). And while the Israeli PM was negotiating, Netanyahu and Lieberman warned of these “dangerous concessions” and made it clear that the next Israeli government would not see itself committed to the understandings between the lame-duck Prime Minister and the Palestinian President (when the crucial meetings between the two leaders took place, Olmert has already announced he would retire form his post due to corruption allegations, and that he wouldn’t run for re-election). It seems that the talks between Olmert and Abbas were closer in spirit to the Nusseibeh-Heller negotiations or to the talks that led to the Geneva Accord than to the Oslo process: full of good-will, but short on political authority that could back it up.

How do we get out of this dead-end? Avishai thinks that the US should present its own peace plan, based on the points of agreement between Olmert and Abbas. He writes on his TPM blog:

The point is, an Obama plan should be presented first to (and coordinated in advance with) the EU, the Quartet, the leaders of the OECD, and congressional leaders for that matter. It should be declared consistent with Olmert’s offer and designed (as Olmert’s offer was) to be “in the spirit” of the Arab League Initiative of 2002. Its great victory would not be in (immediately) getting Israelis and Palestinians to yes, but in creating an international consensus which all sides, especially Netanyahu and Israeli leaders and journalists more generally, would have to contend with for the foreseeable future. Obama could make the plan concrete by, for example, offering to provide funding for the RAND Corporation’s ARC project, tying a Palestinian state together with a transportation corridor, and offering Israeli infrastructure companies the chance to participate.

In the NYT piece, Avishai explains:

It is hard to imagine Netanyahu resisting an Obama initiative should the president fully commit to an American package based on these talks and rally the E.U., Russia and the United Nations.

Is it so hard to imagine? Some described the moratorium deal offered by the Administration last autumn as the best ever for Israel, and yet, Netanyahu rejected it. And it wasn’t even about a full peace treaty, just 90 days of settlement freeze, a good-will move that would enable negotiations to move forward.

Right now, there is no political force in Israel which is able to carry out the evacuation of settlements necessary for a peace deal, or to sell the Jewish public the return of dozens to hundred of thousands of Palestinian refugees. Without those, there would be no peace. There could be some intermediate treaty or a unilateral withdrawal, but it won’t bring peace.

The current Israeli leadership can’t even agree on a peace plan that would hand the Palestinians 60 percent of the West Bank, as some ministers proposed. The Knesset has a block of 60-65 members that would never agree to the concessions offered by Ehud Barak in Camp David, let alone those negotiated by Olmert. That’s the reason for the absence of peace talks – there is nothing to discuss.

If we had learned something during President Obama’s first couple of years, it’s his administration’s limits in applying effective pressure on a determined rightwing Israeli government. The administration tried to play it tough, but Netanyahu called their bluff – and won. Many people in Israel and Palestine, including myself, were hoping for a better outcome, but I don’t think the administration is to blame, in spite of mistakes it made. The political circumstances are such that applying pressure on Jerusalem is simply too expensive, in terms of political currency. A president might lose a lot by confronting an Israeli PM, and gain very little. Perhaps that’s the reason that the last two presidents pushed their peace plan just as they were getting ready to leave the White House.

So, what should the US do? In my opinion, the answer is not much, at least for the time being. As recent events taught us, there are limits to the ability to shape the Middle East’s politics from the Oval Office. The US should take a step back, and most importantly, let Jerusalem face the consequences of the occupation by gradually lifting the diplomatic shield it provides Israel with. It should be done in a smart enough way not to hurt the administration politically, but the message needs to be clear: If Israel continues to hold on to the West Bank, it will become more and more isolated. With time, this message would resonate with policy makers and with the Jewish public.

We could also hope that the Palestinians will be able to unite their government, so that when the opportunity presents itself, the leadership that negotiates the end of the occupation would enjoy a greater legitimacy than Abbas and Saeb Erekat did in 2008. Hamas has a veto power over agreements, just as the Israeli Right has. If these forces are not engaged with, there isn’t a plan in the world that would bring peace.